Completed in 2012, this exclusive contemporary hotel is part of a historical monument located in the Gothic Quarter of Barcelona, Spain. 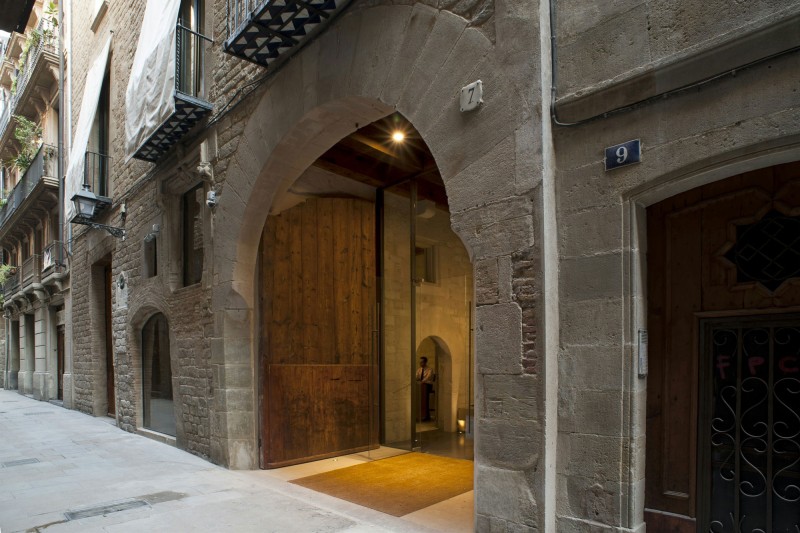 “Mercer Hotels is proud to present the Mercer Hotel Barcelona, an exclusive five star “Grand Luxe” hotel and listed historical monument in the heart of Barcelona’s Gothic Quarter.Located at number 7 on Calle Lledó, the building incorporates part of the Roman walls of the ancient city of Barcino, some of which date back to the 1st century A.D. Hotel guests have exclusive access to the medieval paintings of the 28th defence tower in an establishment whose core element is stone and whose renovation was carried out by the prestigious architect Rafael Moneo, who was awarded the Prince of Asturias prize in 2012.

The bedrooms, like every other space throughout the hotel, have been designed to sympathetically combine the restored historical heritage with high quality materials and modern furnishings, meticulously and thoughtfully chosen by the architectural team.The striking feature of the hotel lobby and central courtyard is the light which, on crossing the threshold, strikes a marked contrast with the shadowy street. The spacious mediaeval courtyard is framed by 17th century columns and presided over by three orange trees which add an air of cool freshness. This open space is enhanced by archways, balconies and large windows that have been added and modified over the course of centuries, now providing the perfect spot for our guests to take breakfast and lunch or enjoy a drink.

Another of the historical features of the hotel is the library on the ground floor. This part of the building has great historical significance in that it used to be on the sentry route between the 28th and 29th watchtowers of the Roman walls and features mediaeval frescoes uncovered during the renovation process.

The hotel’s 28 exclusive bedrooms are distributed over three floors, and in each of them the original ceiling heights and exposed wooden beams have been preserved. Every bedroom has its own hidden treasure: a piece of heritage which acts as a focal point and can only be enjoyed and appreciated by the occupants of the room. The bedrooms have natural wooden floors and in the bathrooms we have used Corian, a resin designed to provide robust surfaces yet with an avant-garde design. The fabrics are made from 340-thread cotton in warm, natural tones which allows the exposed stone features to dominate the space.The cutting-edge technology in all the bedrooms is also worthy of note, such as the LCD televisions with integrated internet access, free wireless internet connexion and touch-sensitive lighting controls.

The full grandeur of this mediaeval building can really be appreciated in the Grand Suite of over 150 square metres, which is on the first floor or what used to be known in bygone centuries as the ‘noble’ floor. The occupants of this privileged space will find a Gothic gallery overlooking Calle Lledó and stone columns surmounting the façade. The Grand Suite comprises two rooms, a suite of 95m2 and an adjoining Junior Suite with views over the large interior courtyard with its orange trees.

The terrace is located on the fourth floor of the hotel, between the two watchtowers, from where you can pick out the dome of the Santa María del Mar church, the Basilica of San Just i Pastor and Barcelona’s Gothic Cathedral. Here you can take a refreshing dip in the pool, which is for the exclusive use of hotel guests, or enjoy a drink or a typical Mediterranean snack from the wide range on offer at the poolside bar. At dusk, the terrace opens to the public, providing a unique setting for enjoying a cocktail whilst taking in the unparalleled view over the most ancient rooftops of Barcelona’s Gothic Quarter.

The Mercerino restaurant offers a gourmet experience in the shadow of the Roman walls, surrounded by colourful frescoes dating back to the 13th century. The menu, created by restaurateur Josep María Massó, is based on fresh market products with a hint of French influence. The combination of this singular setting and the carefully devised gastronomic offering is ideal for experiencing the essence of both historical and present-day Barcelona.The Vermut Mercerino, which has direct access from the street, reinterprets the restaurant’s cuisine in the form of a tavern with a carefully-chosen range of aperitifs and cold tapas-style snacks. This is a place where guests can enjoy an historical atmosphere enhanced by modern décor while enjoying the very finest food along with a wide choice of beers and wines.

The Mercer Hotel Barcelona is a unique example of the city’s heritage and invites you to discover the history of the city in an exclusive setting.”

The W Hotel in Barcelona by Ricardo Bofill

The Jewel of 40 Mercer

Apartment in the Gothic Quarter of Barcelona by YLAB Arquitectos

The Windmill Hotel by Vassilis Moraitis

The Stoneridge Residence by Assembledge+ and Billy Rose Design