The 2012 project is a fusion of eastern and western details, resulting in a space that is open yet cozy, practical yet comfortable. 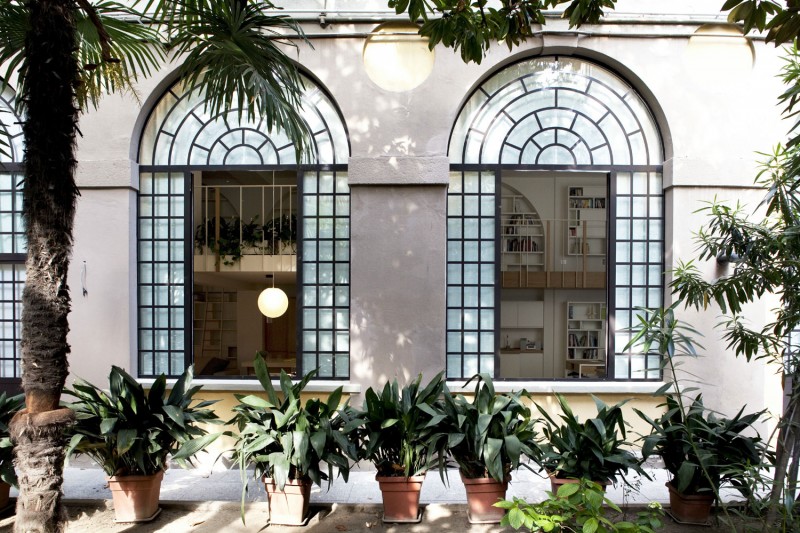 T House in Milan by Takane Ezoe and Modourbano:

“The design of T House born from the needs of Client, an Artist that preferet free spaces, rooms without a real dividing line between the public and the private where to work until late night.

The Studio has very specific characteristics: large, bright, comfortable, with the ability to hold meetings with employees and where the artist can move easily between works of great size, but at the same time simple and neutral where you can work without external contamination. In the vicinity of the study was obtained gallery / exhibition space, connected to an archive where to store the artist’s works in a practical way

The house is dominated by the kitchen where Client can prepare meals for a conveniently large number of guests and where to organize social occasions. The living spaces are deliberately lean, characterized by maximum flexibility to freely configure the furniture into it without the oppression of too many “objects”.

The sleeping area, located on the mezzanine floor is an intimate, permeable but inviolable area; the master bathroom, as in Japanese tradition, recalls the thermal baths in stone and wood, characterized by the large pool and relaxing lighting from below.

The functional layout refers to the traditional Japanese buildings where everything is “semi-open” and the spaces are divided with the traditional sliding doors fussuma or syouji, hence the idea of having open spaces and large planimetrically double heights to emphasize the peculiarity of this space in Milan of the eighteenth century, formerly a horse stable.

In all the design choices, there was the desire to preserve and enhance the distinctive character of this place, the stone fragments, the arches of the large windows and large wooden beam of gallery. T House is the combination of sophisticated elegance of an eighteenth century loft in Milan and depth of a Japanese house.”

Matteo Nunziati Designs an Urban House with a Garden in Milan, Italy

Cristiana Vannini Renovates an Apartment in Milan for a German Artist

AIM Carries Out a Renovation in Milan, Italy