It was created by removing the walls from an existing apartment to increase space and natural light. 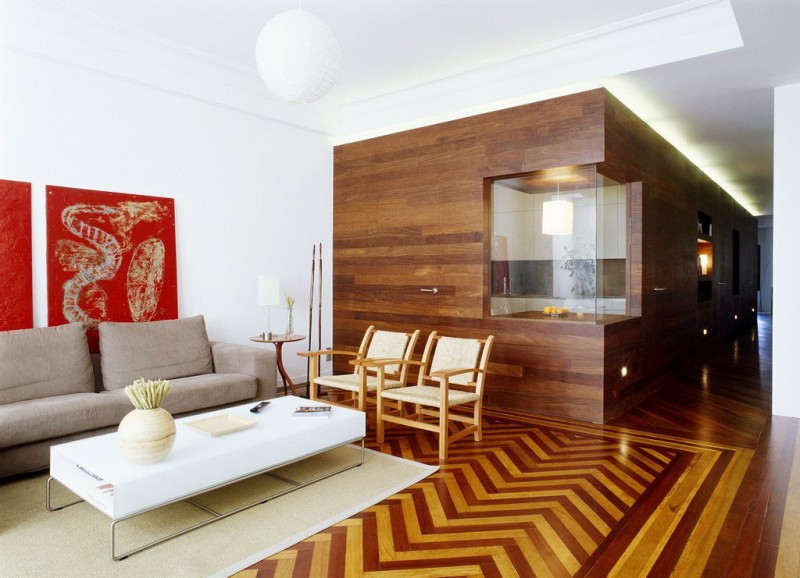 Apartment in the Old Town of La Coruña by Díaz y Díaz Arquitectos:

“This flat is in a building of the Fifties; located in the old town of Coruña and the dwelling where the reform is going to be made is the third right.

The building is constituted of a ground floor and seven floors with dwellings.

The main façade looks the representative General Azcárraga Square number 7, facing north, and a secondary façade to a plot with south orientation. In addition, it is provided with three inner wells used for lighting and ventilating the different rooms of the dwelling.

The house, that approximately has a useful surface of 120 m, has the following rooms: lounge-dinning-room, office, scullery, kitchen, bedroom, toilet and bathroom. The main problem to solve was to equip it with natural lighting.

The rectangular proportion with quite depth made it necessary to find the way to introduce the natural light in inner areas that were shady before; consequently, it was considered to use a wooden box to house the kitchen, a study and the bedroom.

It was arranged so that the rest of the space that forms the living room, the corridor and the main bedroom included this box.

The reform provides for the restoration of a dwelling in one of the most unequalled squares of the old town of the city of Coruña.

The reform involved the total demolition of the partition walls. The functional program has been reversed linking the kitchen to the lounge, where formerly a Venetian room existed, and creating a bedroom in the former kitchen.

The removal of the partition walls, the nonexistence of doors and the glasses treated with acid facing the wells, bring the light into this house of rectangular plan.

A cube of sucupira wood contains the new rooms: kitchen, office and guests’ bedroom. A second white cube facing the last one contains the toilets, the closets and the access.

All the doors design without any cover plates or trimmings to give continuity to the paraments.

The alternation between furniture of the last line of design and some classic one confers quality to the house.

The most outstanding elements have been respected in the action, such as the original floors of chestnut tree wood, elondo and oak forming drawings, and the stucco ceilings with moldings so fashionable at that time.

In order to treat the vertical paraments it was used the sucupira wood in the first cube and lacquer paint in the rest.

The kitchen was moved and linked to the lounge where there was an inner room earlier. This allowed to obtain another bedroom in its place.

The interior design project wanted to combine the antique and the current elements conserving the most outstanding ones (Grounds and ceilings) that are set against the current models to coexist in a harmonic and full of light atmosphere.”