House in Martinhal by ARX Portugal

This house, located in the touristic complex of Martinhal, in Portugal, was designed by the Lisbon-based architectural studio ARX Portugal.

It has large windows that allow for much natural light to enter the home, which is then reflected on crisp white walls and floors, illuminating the entire home. 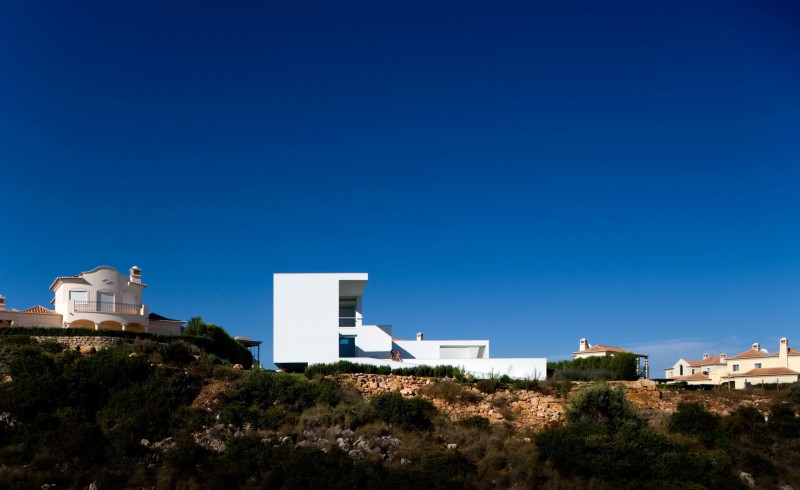 House in Martinhal by ARX Portugal:

“This house is located in Martinhal, a turistic urbanization near Sagres. This is a fairly unbuilt Algarve seacoast, probably due to its aggressive windy weather. Like in the rest of the country, here finally landed instant touristic villages of rustic and traditional-like houses, claiming to be “Portuguese architecture”, to please and sell to foreign tourists. The homogeneity of these urbanizations along the country, when compared to the local variety and richness of popular Portuguese architecture, strikes us as a colonizer typology, unknown, mistaken and groundless.

This house project was developed on the strict respect to the rules of the urbanization master-plan, in its distances to the lot limits, footprint, gross construction surface and volumetric zoning. The longest and higher volume is located on the north side, shaping a quiet marble patio, protected from dominant winds. The lower volume of the bedrooms faces the road creating an “L” shaped house, while providing more privacy to the swimming-pool patio.

Inside-outside spatial relationships are articulated through the tiled court-yards, protecting the large glazed windows from the strong direct sun light, while filtering and reframing fragments on untouched landscape. On the exterior, the house life leans over the nearby valley. The white house with flat roofs, recovers ancient local architectural typologies, where fruits and fish were dried on terraces, a feature that touristic developments seem to forget.”

A Contemporary Rural Home for a British Couple in Gateira, Portugal

ColectivArquitectura Designs a Home with Stunning Views of Grândola, Portugal

ColectivArquitectura Designs a Home in a Dense Pine Forest in Almada, Portugal

One Comment to House in Martinhal by ARX Portugal