Gallery House by Reza Aliabadi has been completed in Markham, Ontario, Canada.

The interior spaces are highlighted on the exterior as white boxes. 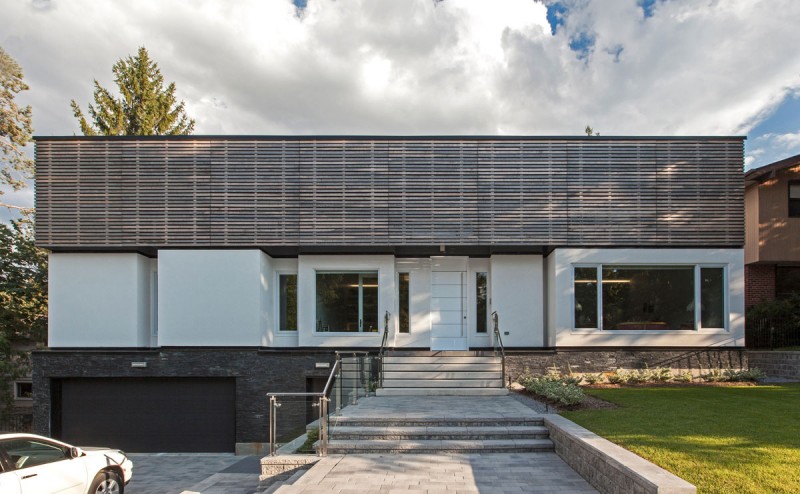 “The Gallery House is a contemporary residential structure that adapts an institutional/commercial typology in that all of the spaces have been aligned and arranged along a galleria. One can imagine that all of the served and servant areas of the house have been plugged in to this empty spine. They then have been stretched out to the north and south where they gain exposures, views and natural light.

Located in Old Thornhill, a neighborhood in the town of Markham just on the northern edge of Toronto, the sloped lot rests at the end of a cul-de-sac. The clients had desired to integrate all of the main functional spaces of the house on the main floor level. This forced the final design to be a 60-foot wide wood and steel structure that accentuates the stretched east-west horizontal figure. Due to the steep slope of the property, one half of the basement is sunken while the other half enjoys the view and access toward the private backyard and benefits from the natural light, which enters through the floor to ceiling openings from the south. On the north the lay of the land offers an opportunity to split the car and pedestrian access into two elevations.

As one enters the house, the viewer instantly finds oneself in the galleria. The proportion of the plain white volumes of the interior spaces that have defined the galleria will differentiate the intimate and formal domains on either end. Moving along the gallery one is led to the bedrooms and a painting studio on the east and to the semi connected living-dining room on the west. However, the home office, kitchen and family room create a buffer, a threshold between the private and public quarters. The remaining miscellaneous services and recreational areas have been accommodated in the basement.

The exterior façade is a collection of white volumes; each box represents one of the interior spaces. Therefore they are all different in width and length, yet they have been aligned on either side of the galleria on the inside and have been restricted by a dark masonry plinth and a light wood skirt on the outside. A conventional pitched roof has been inverted and forms a valley that rests on the top of the gallery. The increase in height mandated double height ceilings on the exterior edge. The horizontal linear wood skirt diffuses the natural light and then pours it into the interior spaces through the concealed clearstory windows that have been carefully positioned on the double height portion of the interiors.

The gallery defines the spatial organization of the house and its circulation concept; it also guides the structural and mechanical schemes. In order to navigate between quarters, one does not need to invade another area of the house. This causes a very efficient spatial network, where none of the spaces will compromise a portion of their floor area to passages. There is no interval except for the gallery itself. Although the gallery generates a linear void, its emptiness is the very soul of the project.”

A Home Renovation in Toronto, Canada

The Offset by Ja Studio + ARTA Design and Build

Through House by Dubbeldam Architecture + Design