Located in Casacanditella, Italy, the Castello di Semivicoli houses a hotel that is an irresistible travel destination.

Originally built between the seventeenth and eighteenth centuries, the ancient baronial palace underwent an extensive renovation in 2005-2010 led by the Montesilvano-based Oriano Associati Architetti. 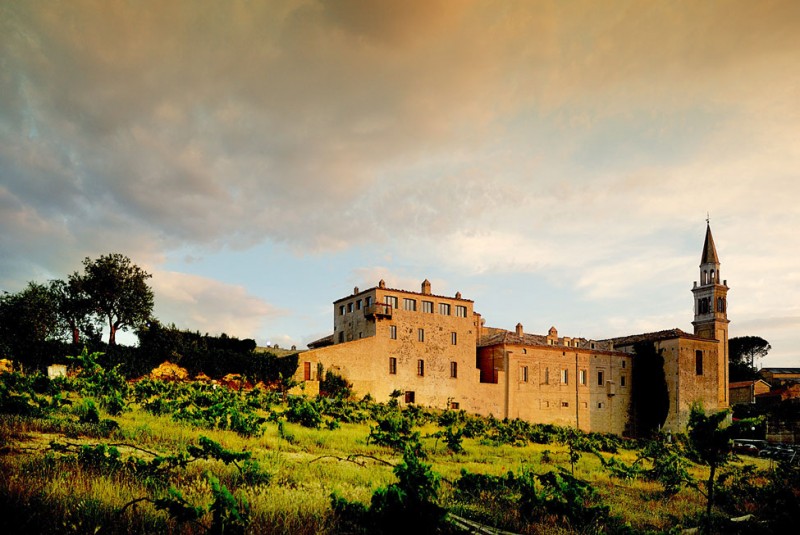 “Semivicoli, Summus Vicus, once an independent municipality of Casacanditella, stands on a hill with a pleasant view, an endless valley with a backdrop dominated by the mother Mountain, the Maiella. On the highest hilltop adjacent to the Mother Church stands the historic mansion called Castello di Semivicoli. Built in the seventeenth century, the important and imposing residence of the noble Valignani first and the Perticone after, underwent a long period of neglect which lasted over half a century and which resulted in serious degradation.

In 2003 it was acquired by the Masciarelli family who decided to make a hotel of excellence and entrusted the project of recovery, restoration and repurposing to Oriano Associate Architetti and in 2005 work began to restore it, completing it in 2010. The property of approximately 2,500 square meters (26,900 square feet) of usable areas, as well as 20,000 square meters (215,280 square feet) of outdoor areas like parks and gardens, comes with a very elongated rectangular ground floor which houses the rooms that were once used for productive activities (mill, winery, warehouses, etc.) and redeployed to community environments, convivial and of representation.

The main floor is characterized by a succession of private rooms once occupied by the Perticone family and now destined to receive the Masciarelli family and their guests. The mezzanine floor and the attic, for a time for the servants and then inaccessible and unused, welcomes now the rooms and ancillary spaces of the accommodation. The last level, soaring above the attic, was originally intended as a barn is now home to the most prestigious accommodation units with a 360 degree view of the Maiella and Gran Sasso, the Adriatic, and the cultivated valleys.

The objective was to make it a welcoming place of great prestige, where the strict conservation of architecture is in harmonious and clear dialogue with furnishings of minimalist elegance. Being a guest at the “Castello Semivicoli” should mean not only to have the opportunity to enjoy the unique simple elegance of the rooms, the living areas, the leisure center, all different from one another, but also to let oneself be captured and led towards the knowledge of a page of history unfolding before one. The renovation work has addressed primarily the restoration of the resilience of structures severely compromised by the deterioration resulting from neglect and incongruous actions carried out in the 50’s of the last century.

The structural adjustment was made in accordance with local regulations in earthquake-prone areas, restoring and enhancing the resources of the structures and the original materials, eliminating the additional actions incompatible with the constructive nature of the original artifact, introducing aids compatible with the pre-modern construction techniques. For the reintegration of the damaged walls and the reconstruction of collapsed ones, they used brick and stone, input diatones and chains with beads made ​​of reinforced masonry with finishes of stones adopted in accordance with the pre-modern construction techniques and the overall image of the ancient handiwork.

The rooms have been subjected to a rigorous restoration process, anticipating reallocations compatible with the design and historical dimensions without forcing or altering the original size, avoiding pretentious functionalism or ephemeral modernism, re-using the materials where possible or introducing recycled materials that were compatible.The plants used were chosen with the principle of maximum performance efficiency and minimal invasiveness to the ancient handiwork, so the radiating heating-cooling went under the floor and simple lighting systems were used, aiming to achieve micro-climates and contexts of quality without altering the perception of places. The toilets, unrelated to the spatial organization of the original setting, were introduced in the rooms without creating new rooms but as “temporary” and “light” elements outside of the space so as to not alter its perception and do not contribute to redefine the geometry and the original size.

In Semivicoli one seeks peace … the architecture, the materials, the colors and scents, whether contemporary or ancient, work together in an attempt to preserve the extraordinary harmony still present in the landscape, architecture and people.”

A2 House by VPS Architetti

Balaclava Road by Cos Design