This apartment, located in Bondi Beach, a suburb of Sydney, Australia, showcases what they’re able to do – enhance environments in a way that is both stylish and comfortable. 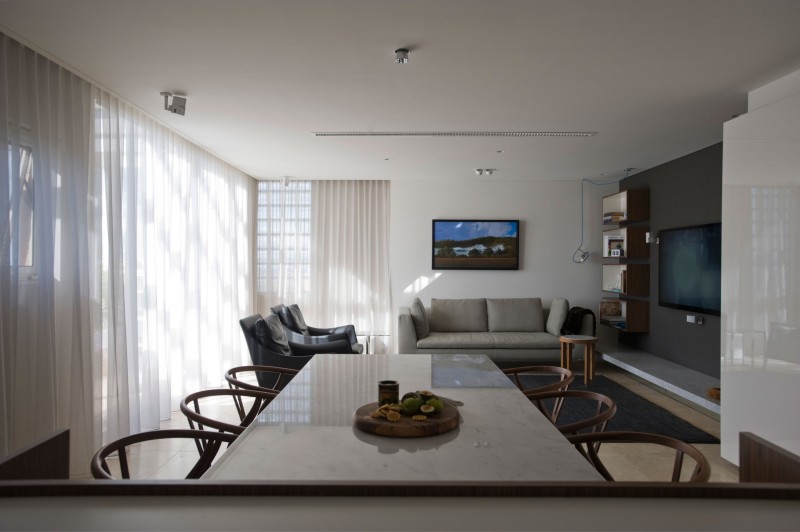 “The layout of the cook-top and sink really selected itself as the plumbing was fairly fixed and the window had to remain, the biggest challenge came trying to conceal the structural piers and conceal the wall ovens and appliance cabinets.

The designer decided to create a 7.2lm (23.65 feet) run of storage with a “pop and slide” door system to conceal the wall ovens and steamer, appliance cabinet for all of the small appliances; & second appliance cabinet would house all of the breakfast products and tea/coffee making facilities and also the entry into the scullery. This solved a number of issues as all can be easily opened when required and closed when visitors come over. The scullery became a pivotal part of the design as we could house the second dishwasher, 2nd fridge and wine storage (wine fridge) and one of the great successes of this kitchen is the wall of white glass installed in the scullery which acts as the hub of the family home….white board markers & family planner live front and centre and can be closed of to guests effortlessly.

The structural piers played a very big part in the design concept as I had no choice but to highlight one of them on the cook-top run and make it a design feature of the space; a bulkhead was created to join the vertical element so it would tie in and shorten the tall timber joinery preventing it from connecting with the ceiling. All the walls (including glass splash-backs) and ceilings were painted in the one shade of white to give no clear distinction of were the wall stopped and the ceiling started. A timber surround was designed to tie in the integrated fridge on the left of the pier to give the feeling it was coming through the pier and also to frame the cook-top area; the timber surround also married the tall joinery element on the right side (near the window) which is the stack, the challenge here is that future access is required and we did not want any visible fixing. A vertical split baton panel was applied to the vertical panel so it was easy to remove and allow access if ever required.

The final piece of the puzzle was the island unit, we have a family of 5 using this every day and with the request for up to 12 seats it was decided (after much debate) to rotate the table and integrate it into the island unit, this did a three things; firstly it removed one walkway that would have been created if it was to run north to south. Secondly it allowed us to create a extension table that could be easily extended each weekend when the entertaining would start & finally it drew your eye through the room upon entry; making the space appear larger. BACK TO The table…this needed to be bold yet understated but in the same breath fulfill the client’s desire for a real show stopper! After much discussion, debate and sketching the designer pitched the idea of a infer red remote control system normally used for pop up plasma televisions in entertainment units. A 316 stainless steel frame was engineered to take the load of the marble top and house the mechanics of this system….the table will seat comfortably 8 and with the extension table extended it could easily seat 10 to 12 people the client was searching for.

The layout of the bathroom as far as bathroom fixtures went, was self selecting; there were real challenges with this space. The first was to establish a way to get the plumbing were it needed and how do I treat the circular window that cannot be changed! The designer decided the best thing was to create a false wall to do two things. First thing was it allowed the running of plumbing works and secondly it depend the round window and made it a real feature. This was then tiled with the selected Bisazza feature tile to highlight the depth and push the eye through to the Bondi view.

The clever use of recessed joinery, mirror and light gives this small bathroom a real touch of glamour. With a large amount of bathroom products required the real success to this bathroom is the overall feeling of space achieved by the designers.”

Glitz and Glamour by Minosa Design

Scandinavian Design: A Relaxing Space Under The Roof

A Home for an Avid Traveler and Photographer and His Family