This quirky office space was designed by SelgasCano Arquitectos and is located in Madrid, Spain.

Resembling more a half-underground greenhouse than an office, the structure allows office workers to enjoy the wild outdoors while still completing their day-to-day tasks. 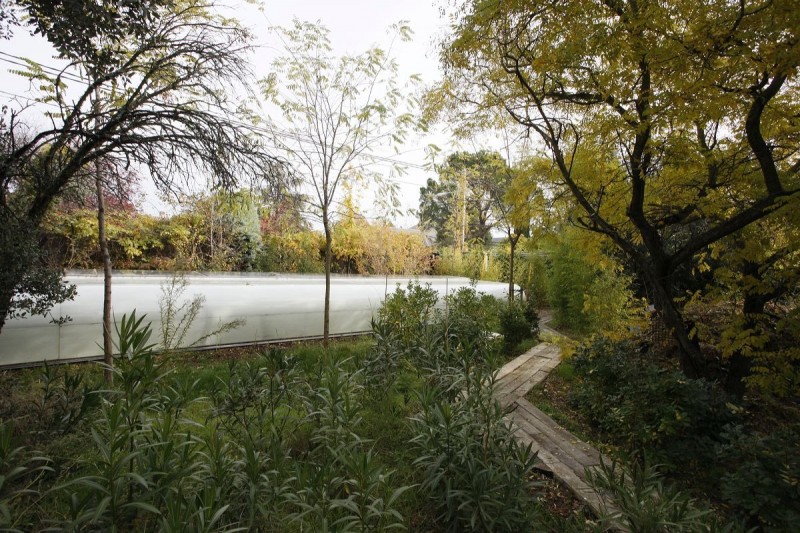 “What is being sought with this studio is quite simple: work under the trees. To do so, we need a roof that is as transparent as possible. Also, at the same time, we need to isolate the desk zone from direct sunlight.
Hence the transparent northern part. The part that is covered with a bent sheet of colourless plexiglass on the north side. The south side, where the desks are, has to be closed in much more, but not completely, so there is double sheet of fibreglass and polyester in its natural colour on the south side, with translucent insulation in the middle. All three form a 110 mm (4 in) thick sandwich.

In the former case, the outward view is clear and transparent. The views in the latter case are translucent, somewhat marred by the cantilevered metal structure left inside the sandwich, with the shadow of the trees projecting onto it gently.

This simplicity, it is so simple, will unfortunately mature later on into an extremely complex structure. We mean to say complex in the sense that it was impossible to convince a company to get involved in such a small building from start to finish, with components that may have been straight from the catalogue, but were not, shall we say, for catalogue-style assembly, forcing us to contract the work out under what is known as “the administration” procedure, with a timetable that more or less fitted in with when the construction companies were available.

For example: The polyester party of the sandwich is composed of two types of pieces, both pultrusioned and both listed in catalogues: a straight piece with small stiffening ribs, and a curve that is only produced for the roofs of a few railway carriages in Germany. We had to wait for an order by the German railways because the few metres we needed did not warrant the recomposition of the production line – can we sent out a big hello and thanks to Gonzalo Guddat, who worked at the Danish manufacturing company.

In between, we installed translucent white polyethylene insulation foam to preserve the translucence of the polyester. The transparent part was made from standard sheets of curved plexiglass, milled at the edges to enable a film of silicon sealant to be injected between the sheets. One company bent them, another assembled them, and yet another made the two sides, which are in 10mm white opaline methacrylate on a steel frame, which can be fully opened to permit air circulation by using a system of pulleys and counterweights.

Half burying the whole thing, to provide horizontal views of the allotment where the arm is installed, comes before all of that, but it’s OK to do it afterwards as well. Everything placed below ground level is in concrete with wood formwork, wooden planks that are also used for paving, firmly bolted, painted in two colours with two-component paint with an epoxy base.

And to finish off, we have given it a sightly less….. slightly more… wet touch: on rainy days, that rain, when it rains, the raindrops on the plastic, when they hit, sometimes more, sometimes less, sometimes a lot… sometimes a sound… “

House and Studio YC by RTA-Office