Villa Blåbär is a modern residence by pS Arkitektur that is located in Nacka, Sweden.

It is a 2012 project that features energy efficient fixtures and views of the surrounding forest. 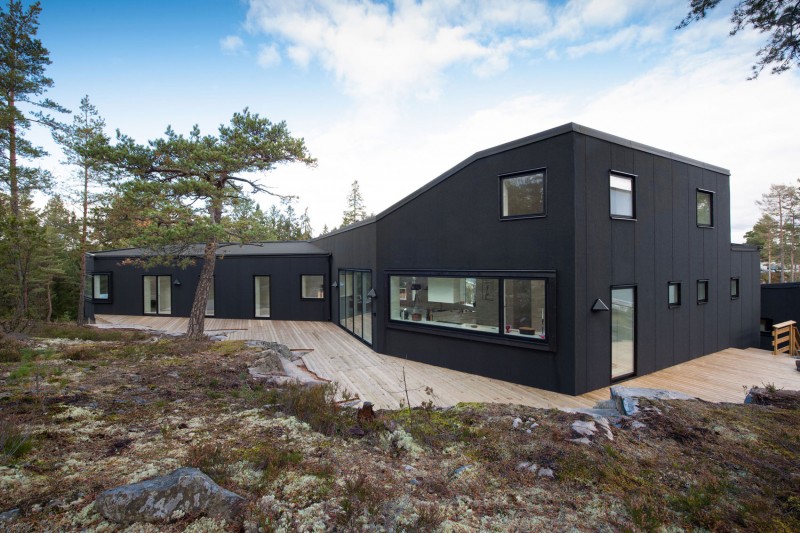 “The surrounding nature and slope dictated the shape of this one family house fully covered in black roofing felt.

Delightful views into the sunny forest, space and a daring uncompromising design was the starting point for the development of this villa in Nacka, outside Stockholm.

The house was created during a number of workshops with the client, where different volumes were tested in model and several site visits.

The challenge was to locate all rooms on the same level, and trying to fit the house on the sloping ground of this nature site.

It resulted in a narrow and extended house that sits at the very top of the site, hovering on concrete blocks over the rock.

In this way the house itself shelters the terrace from unwanted views from the road and neighbors.

The movement through the house mimics the initial exploratory walks we had on site prior to building. The master bedroom is placed where one gets the most spectacular view.

The house is fully covered in roofing felt on both roof and facades to give a calm uniform black exterior that contrasts with the crispy white interior.

On the inside the wardrobes, lighting and sockets are inset in walls and ceiling to give an even and clean look.

The different functions within the house appear according to a hierarchy, moving from public towards the private; from garage, entrance, then kitchen, living room and farthest away bedrooms and bath.

In order to secure energy efficiency, while at the same time creating spectacular views, the openings on the south, private side are maximized at the expense of the north facing ones, which are kept at a minimum.

The total amount of glazing follows energy balance calculations and together with a geothermal heating system and an exhaust air heat pump the house is well within the legal energy norm.”

Black on White by Parasite Studio

Villa Vals by SeARCH and CMA