This home, located in the suburb of Ferndale in Johannesburg, South Africa, was designed by Nico van der Meulen.

The residence is surrounded by lush vegetation, and is open by way of glass walls and large windows, allowing the outdoors in. 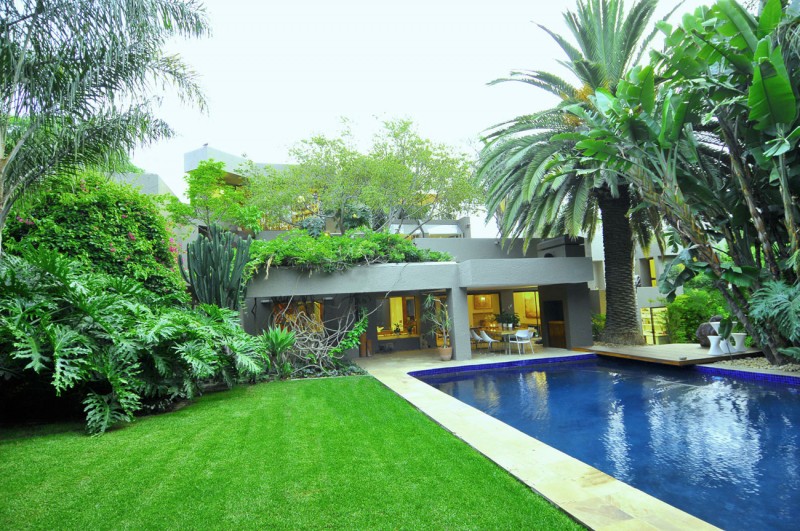 “This residence in a leafy Johannesburg suburb was designed by Nico van der Meulen, founder of Nico van der Meulen Architects in 1986, on a 2000sq.m (21,500 sq ft) sub-division and completed in 1987 for his family, but also to use as his studio, as at that time he just started his own practice and decided to work from his home, specializing in the design of up-market residences.

Nico always believed in passive design and he designed the house facing 15 degrees east of north, with 660mm. (26-inch) thick north facing walls, to firstly create mass to store heat and secondly sun control. Clay tiles were used over the concrete roofs to insulate it and protect the waterproofing against the Highveld sun, while all the floors were insulated from the soil.

Five atria were incorporated into the design, with an existing deciduous tree retained in the one atrium to act as an umbrella over the house, with a large water feature to help cool the house in summer. In another a fast growing palm tree indigenous to South Africa was planted, with groundcovers to act as natural cooling agents, and black bamboo screens two of the other atria.

The open plan living area incorporates a double volume family room with a water feature and leading onto the lanai and the oversized pool. The breakfast room act as the pivot for this area, situated between the kitchen, family room, dining room and lanai.

The kitchen was designed with a large east facing window, shaded in summer by a deciduous tree, and a motorized north facing window onto the lanai, to facilitate service to the lanai.

During winter every habitable room in the house gets north sun through a total of twenty six sliding and pivot glass doors on the north side and this resulted in a passive building where air conditioning or heating is necessary no more than twenty days a year.

During summer the house is cooled through cross ventilation wafting over koi ponds and the swimming pool with the cool soil under the plants adding to the cooling effect.

In most rooms there are several vantage points into the lush gardens planted by Nico and Santa, his wife, and you always feel you are surrounded by nature and water.

The existing pool was retained as well as many trees as possible, though eventually they replaced most of the alien species with indigenous trees according to a lay-out done by Leon Strydom.

All the current trees are indigenous and were planted by Nico and Santa to create a lush tropical haven in the midst of the hustle and bustle of a big city. Four meter high walls on three sides of the property cut out all traffic noise and enabled them to live without any burglar bars, while the street elevation was designed to avoid the canyon-like effect of high walls, but rather create an inviting open feel, even though it is as secure as the rest of the property.

The four bedrooms are all en-suite, but the house was designed with a separate wing on the west side of the hall for the three children while the main suite with his and her dressing rooms and sunny, airy

bathroom is on the north and east side. The double shower (fitted with steam jets) was designed that you can shower in sunshine, overlooking the gardens.

On the second floor on top of the main suite and gymnasium two private studios were built, one for Santa to paint and another where Nico sits and designs at night and weekends.

The studio area is fitted with a kitchenette and a cozy lounge area overlooking the gardens. A fire-pit on the balcony next to Nico’s study and the al fresco dining area next to Santa’s studio is regularly used.

Several of Santa’s paintings as well as sculptures by their son, Regardt, are displayed throughout the home, as well as other art pieces collected by Santa during the twenty five years in her home.

The downstairs studio area has its own side entrance enabling staff and clients to enter without going into the private residence.”

A Stylish Apartment in Heraklion by Constantinos Moraitakis