Located in Moscow, Russia is the Multi-Level Apartment by Peter Kostelov.

Along with the apartment, nearly all of the furniture was specifically designed for the space as well. 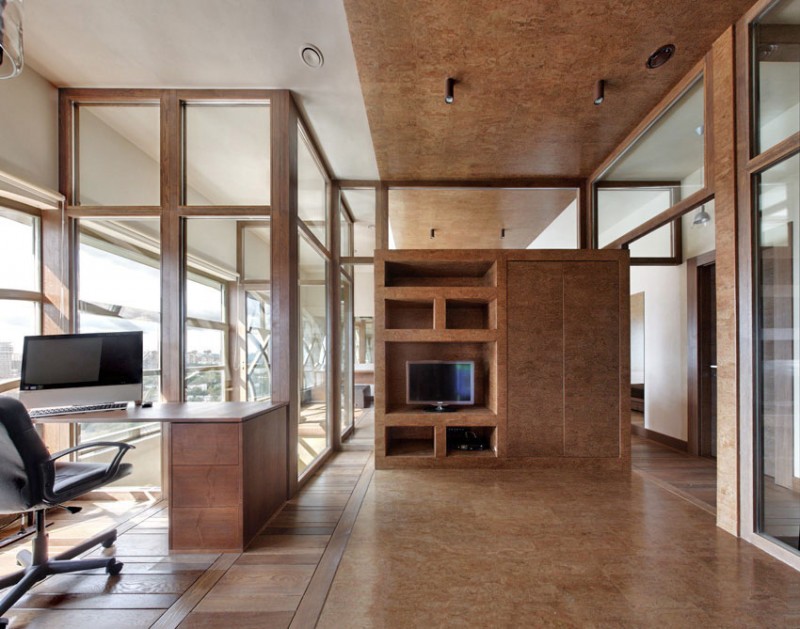 “Characteristic of this apartment is its inner space and cubic capacity. It is located on the top 18th floor. Initially it was a two level apartment of total houseroom of 258 sqm.  As for the first level it was quite common one: three meter standard height of ceiling and a houseroom of 69 sqm. The second level houseroom was larger 189 sqm and the height of ceiling varied from 3 to 8 meters in different zones. Surely these unique space peculiarities caused project direction: to not only exploit maximum of this nonstandard extreme height but to make multi-level space.

The owner of the apartment approved the idea, moreover it was requested that each member of the family should have extra space so that everyone including 3 children of different age and gender could have their private space for comfortable living. Central part of the apartment on the second level was as large as 60 sqm and more than 8m high. The space was vertically divided into two levels by the newly made third level.

After making necessary calculation on the thickness of overhead cover 0,5m was put as required space for structural beams, placing ventilation and final trimming. The highest ceiling 4,5m was chosen for the living room located at the lower part of the second level. The upper part on the second level got 3m, where a bedroom, a bathroom and a study room are located. Thus the third level added 54 sqm to the apartment.

The covers between second and third floors have two clear spaces. One was left for the staircase, while the second one, the closest to the window, appeared to join two spare spaces of the second and third level, the flow of light of which makes partially two-tiered space.

On the third level a dome made by glass partitions separates a bedroom and a study room, which allows the light to spread evenly. The floor space of 9 sqm was added to 20 sqm of the lower level. Consequently the floor space of each nursery room got 30 sqm located on two levels. A home library ceiling in the right –hand side of the apartment is 4,4 m. The same as in children’s room the second level was made here which enlarged it to 8 sqm All in all 35 sqm was added to houseroom. Rearranging turned a duplex apartment into four-level apartment having added to it 90 sqm of extra house room (from 258 sqm up to 348 sqm)

Nearly all pieces of furniture (except settees and beds) were specially designed. The owners gave preference to warm and light colors. In contrast to upholstering the furniture was made from natural processed metal: dinner and low tables, bookstands, stools, shelves.”

White Apartment by Next Level Studio

Geometrium Visualizes an Apartment for a Young Family in St. Petersburg, Russia

Apartment in Kiev by Irina Mayetnaya and Mikhail Golub