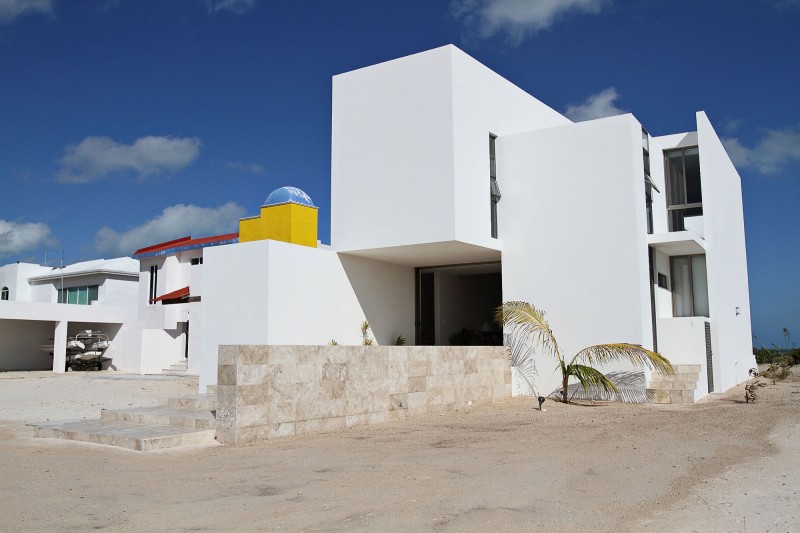 “This beach house was designed for a 3 generation extended family as a summer residence. The elongated terrain is 12.5 meters wide (beach-front) and 170 meters long. The idea for the project was to work in such a way that all the social areas and bedrooms had a relevant link with the ocean, and to create a spatial flow with the volume’s conformation, breaking down the virtual barriers between interior and exterior.

When approaching the house from the highway, it is presented as a succession of volumes as great stones forming a mound perforated by a hollow that frames a view towards the ocean even before accessing the house. The spatial concept of the ground´s floor social area is the continuity from the access yard to the sea. The entire aluminum window framing is hidden inside walls so the space is “read” as a large dock that goes through the house minimizing the virtual barriers between interior and exterior. This approach allows the functional integration of all the spaces.

The composition of this space is peculiar; one of the main composition walls is arranged diagonally in contrast with the orthogonal disposition of the rest of them, creating a space that gradually opens toward the sea. This also helps creating a visual illusion that makes the ocean seam closer to the house and the highway farther than it really is, so the relation with the context is clearly emphasized in the direction towards the ocean. On the ground floor, containing the public space by the sides, to the left is the kitchen and other services, and to the right is the guest bedroom, both with ocean view. The public space integrates spatially with the upper floor via a double height living room, so its circulations connect visually directly with the main area of the project. There are five bedrooms on the second floor: two service rooms to the back and three main rooms with view to the sea.

The master bedroom plays a particular role in the composition: It is above the social area and terrace, projecting towards the sea. The client has a special affinity to sleeping in hammocks, a common practice in the region… so a special environment for the hammock is created on the terrace: it floats on a space that allows enjoying 300° of visual aperture towards the horizon without any visual interruptions such as columns.

This terrace isn´t roofed, so the sky can be enjoyed vertically; and having very high above horizon wall enclosures, diagonal shades provide comfort of use during the day. It is worth mentioning that the owner of the house sleeps on this semi-exterior area every night, and sometimes until dawn. The spatial-volumetric shape of this idea becomes the main plastic element of this north and principal facade of the house.

Finally the house stands as a sober element with a clear volumetric expression. The idea of aperture and integration with the sea are reinforced with expressive elements of the composition. It is a house with character; friendly with the tropical environment.”