The architecture of the home reflects its function as a beach home, with large, airy spaces and abundant natural light. 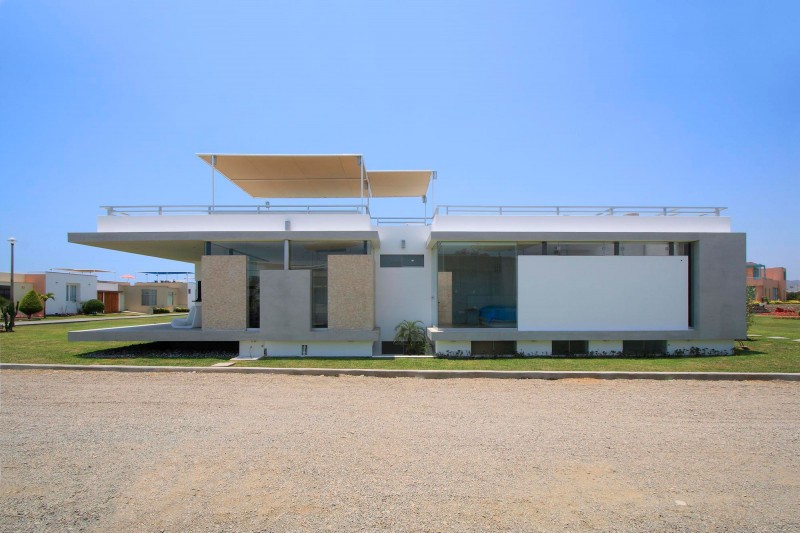 “This beach house has as its main virtue that it allows natural light to uncover it, showing different shades based on the time of day and according to the position of the sliding enclosures or the large openings. The proposal of “leaf removal” was to achieve this, without any ornament to accentuate its formal synthesis. The spaces of the house work jointly or fully independently, according to the needs of the moment, spread over three levels with autonomy and unfolding chronologically according to the needs of different users.

It is a house with rooms that revolve around a large central space with sliding closure located on the lower level, where coverage is made out of aluminum and polycarbonate which graduates the level of incidence of the sun and cross-ventilation. This space, whose function is recreational, is destined to be a bar-lounge, a being casual, game room or finally an environment for private sunbathing next to a swimming pool.

Because it is a double-height space (spanned by a glass bridge) it integrates the first level with the basement and, because it has a roof that opens, it integrates the terrace on the last level (where the pool is located) with the whole house. The floor-to-ceiling partitions of the room extending the interior space to the outside, and once opened, the limits are diluted creating a generous fully-integrated space.”

Casa Gómez by SO Studio