This modern home is a 2013 project by MPR Design Group that can be found in Sydney, Australia.

It was designed to provide a sense of sanctuary as well as views of the nearby Bronte Beach. 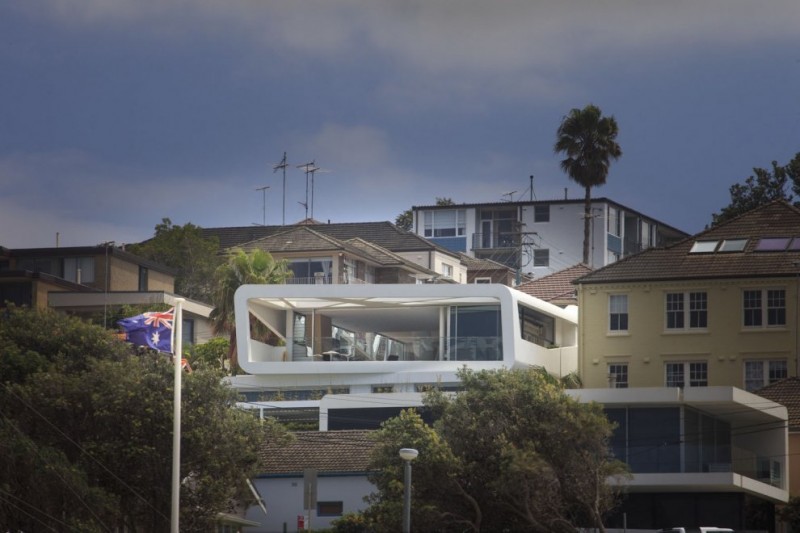 “The long standing client is a builder whom we have successfully worked with on several projects previously. He was open to ideas and had an ability to build complex forms and intricate details.

The brief was for a modern family home to accommodate a couple and their three children. The house is located on the northern flank of the Bronte gully with views towards Bronte beach and the coastline beyond.

Our design response was to place the living spaces on the upper floor as better views and more light were available. The bedrooms were located on the middle floor as this was more private and enclosed. The lowest floor has a rumpus area linking the garden and swimming pool to the house.

The underlying design intent was to explore the notion of “prospect and refuge” within a contemporary family house. The “prospect” was the beach and coast views to the south of the site which change constantly depending on the season, weather and time of day.

The “refuge” was the other desirable character where we created a quality of space that provides a sense of sanctuary, enclosure and comfort.

These two driving desires for the house were explored and accommodated through devising two sculpted concrete forms responding to their particular use. The forms are rounded at the edges similar to tubes which are independent of each other enabling the upper tube to twist towards the view.

The upper tube is open-ended which allows the northern winter sun to penetrate deeply into the living spaces while allowing an unimpeded outlook to the southern view. The form also provides efficient passive ventilation drawing the prevailing north-east breeze through the house.

On the two lower levels the character of the spaces changes to places of privacy and refuge. The middle tube houses the bedrooms, each with a different aspect and outlook. The lower level has a cave like atmosphere with the room formed by a cut bedrock wall and a dark stone floor connecting the internal and external spaces. The pool provides a water element spanning between the rock wall and the garden.

The house boldly sits as a modern insertion into the typically poor building stock of its surrounding environment. The context is of varying building styles, scales and materials so the house creates a deliberate contrast in form and colour.

The homogenous appearance of the house allows the forms to be emphasised by sun and shadow with the play of light continually shifting and moving with the path of the sun.

Detail elements have drawn upon surrounding natural forms for inspiration. For example, the angled bands on the front façade reference the tree branches of the native eucalyptus. They also serve as a privacy screen for the dining space behind the facade.”