The home has a very plain facade, the simplicity of which is echoed in the minimalistic style of its interior. 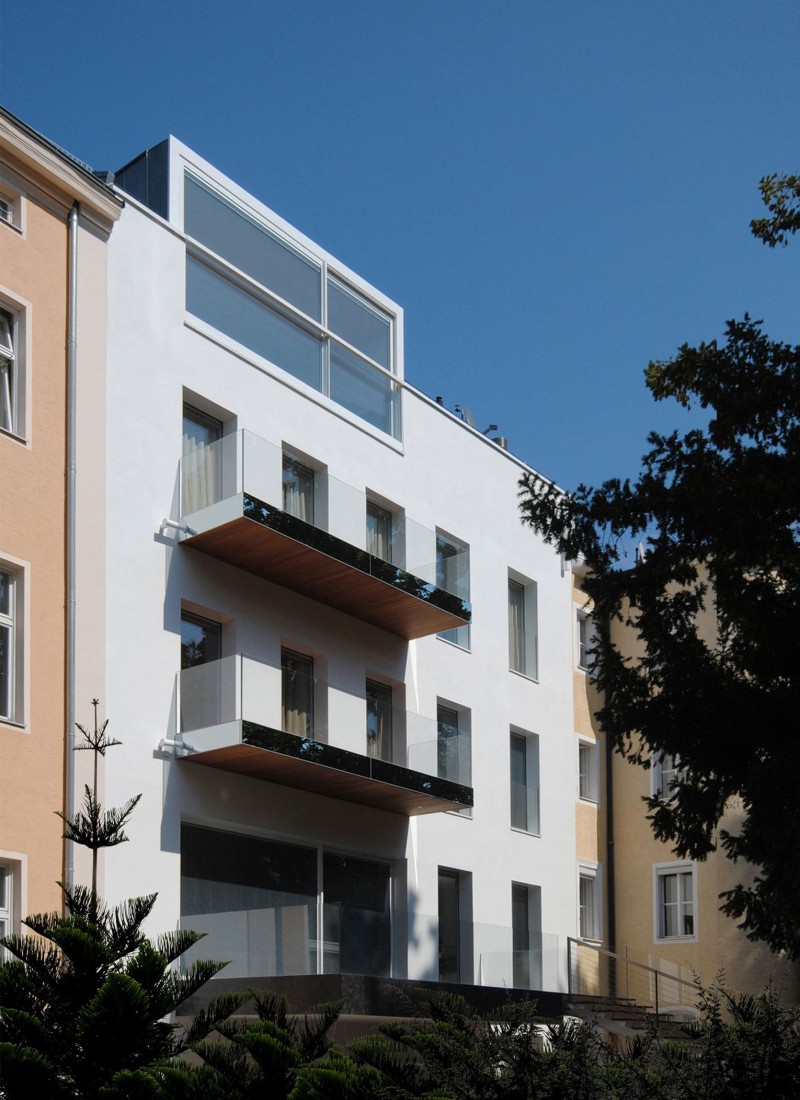 “In the historic center of Regensburg, in Bavaria (Germany), the project foresees the demolition of a building which is part of a continuous “quint” and its reconstruction with new construction criteria and energy standards. The new building is a private home with swimming pool and a sport training area on the top floor.

Answering to requirements of the City to maintain an effect of seriality in the façade openings the project has a very neutral and naked facade but with windows dimension as wider as possible.

Ultra-light crystal railings without handrail, together with invisible windows frame hidden behind the wall, and mirrored glass reflecting the buildings on the other side of the road, add an effect abstraction and dematerialization.

Everything protruding or receding from the facade plane is shiny and reflective, with the thickness of the wall around the windows in white gloss aluminum and the thickness of the jutting out slab of the terraces coated with mirrors reflecting the trees of the park, with a confusing effect.

So that the building sits between the adjacent buildings without altering or contradicting the continuity of the “quint” as the City Council required, but at the same time it reveals its contemporary.

The internal spaces have been organized in three parallel zones with the first zone on the left like a service tower containing all the wet areas of the house and a swimming-pool on the top level. The central zone is void containing an open stairway and a glass elevator.

The third zone contains all the living spaces, without any structure between the two facades.

One empty space from ground level to the roof level is thought like a unique ‘public living space’ with the living-dining room downstairs and the fitness area upstairs, containing in between the suspended volume of the private spaces of the rooms.”

Apartment by the Tuscan Coast by Carlo Pecorini

Private Residence by The Manser Practice

One Comment to Haus Bavaria by Carlo Berarducci Architecture