Seinfeld Arquitectos created this modern home in 2008 for a client located in San Isidro, Lima, Peru.

The focus of design has been placed on the relationship between social and private spaces. 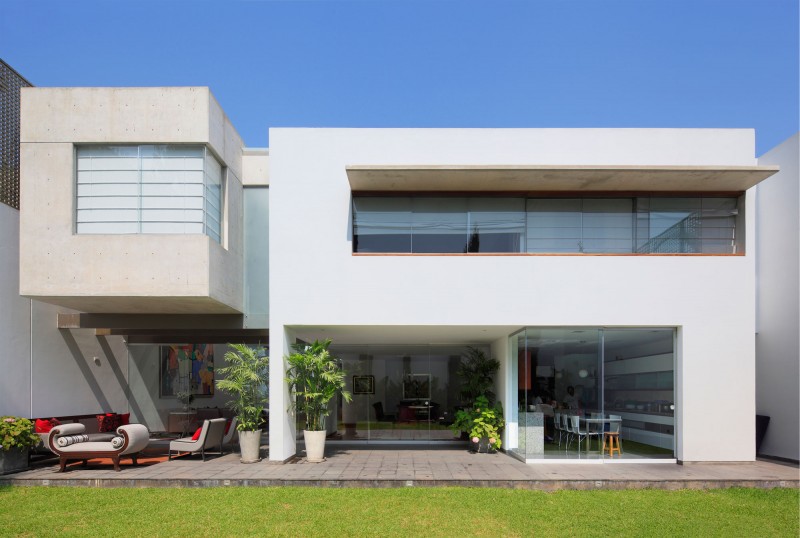 “The project is the result of a thorough and comprehensive study of the relationship between public and private spaces and their architectural tour, where important events occur; It is in the main axis of the house where transitions as well as controlled visuals and scales are accomplished.

The initial tour crosses two patios. The first one of public character leads us to a more content second courtyard. And, even though there is a visual from it which runs through the house to the rear garden, architectural elements are being considered and working as a visual filter.

This the case of the volume of the chimney located between the second hall and the living room.

One can access the first environment inside the house through the courtyard from the side, and within this, moments of great presence –a staircase– are managed, as well as a bridge connecting two rooms of the house which also allows different scale within this double height space.

One enters the house through a glass skin first, and then as an internal façade a wall that runs lengthwise, giving continuity to all areas of social nature.

A volume of concrete to prevent the perspective into the garden from escaping is located in front of the living room, which is a double height space.

It is structured with iron beams to support it from below and other concrete ones to support it from above, separating it from the main body of the house (private area) through a skylight which runs along the social area. This skylightallows the capture of the sun path throughout the day from the living room.

The cantilever volume becomes part of the roof of the terrace which lies on the first floor.”