The house was completed in 2012 and features a simple program consisting of public and private spaces for living. 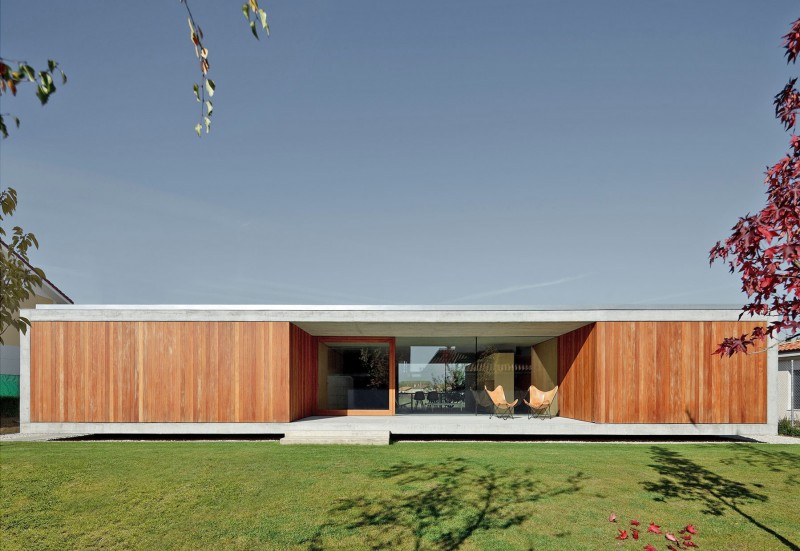 “The starting point of the project answers to two clear situations: in one hand the plot is located in a suburban colony not yet consolidated, in the outskirts of Villarcayo, which does not have any significant value and with very few constraints but legal ones, linked to the accomplishment of the current standards, which mainly defined the heights, suitability for building and setbacks. And in the other hand, the owners, a young family identified with the contemporary architecture, they defined two questions: a house with just ground floor was a requirement in order to maximize his relationship with the garden and the project had to be unequivocally within a limited budget.

Hence, the proposal, should answer, over other premises, to the “optimism” and to the “optimization” which were demanded by the owners, supposing those as the starting point, its “real context”. The program, relatively common, was defined with accuracy by the clients, it was divided basically in two categories: in one hand, a big sitting room and terrace with direct access to the garden and in the other hand, the definition of the most privates spaces, annexed, consisting in a main bedroom incorporating a bathroom, besides two bedrooms, another bathroom and a space for their children to study and play games, additionally kitchen and garage. At the same time, the plot, with a small size, topographically flat, with a substantially rectangular shape and with a single side having access to the street, the orientation north-south coincided with the diagonal, it does not exist any other remarkable characteristics of the physical environment.

The project is aligned with the conditions and the taste of the customer, it expected the resolution of a modern space, domestic container, taking advantage of the pleasure provided by the close relationship with an own outdoor space and facilitated by the horizontal of a single floor. In short, the project seeks an adequate contemporary partnership between those spaces as something intrinsic to the way of life in a single family home versus different typologies. The proposal, due to the limited plot and dwelling, defines a home which is expanded incorporating the whole plot to the “living space”, surrounded by vegetation, which planted around the perimeter will grow until becoming the limit of the family life with the idea of making a bigger and open home.

The volume of the house has a compact development, assuring in such manner an adjusted proposal. The project is defined with a “no isotropic” organization seeking a situation which make its own difference in both directions. In one hand, blind on the sides where the plot is adjusted eliminating in this sense the limit of the house rejecting the presence of the nearest dwellings and keeping open both front sides, hierarchizing and qualifying the garden in two spaces of different character which allow in a direct way, to take advantage of the sun.

The proposal shows a very clear organization of the program, almost synthetic, allowing to define as a scheme: the most private spaces are accommodated close to both blind concrete sides all along its length, making free the space in between, as an open “living” to the gardens, protected by the filter of the porch and seeking the orientation East_West and the close relationship with them. With this “central” disposition of the main space, the “living”, is assured unequivocally as a meeting place to build familiar relationship, where all the spaces of the house and garden met. The more private auxiliary areas are defined, with clear trace, with compact limits and compressed to the minimum, to make available as communal as much space as possible, translating the whole in a simple and free volume of contemporary figuration which suited with coherence to the requirements of the owners. Special mention require the bathrooms: they are crossed by courtyards bringing their basic needs and providing this extra of complexity to the global volume.

Two different types of spaces are defined; in one hand, those of the central space, which are retracted and winning in depth, defining the porch as habitable spaces which allow this glance, deep but discreet, of the outdoor space. In the other hand, those which are practiced on the compact limits of the auxiliary spaces, solved with “individual” character, scattered on the parquetted surface and practiced to the shutters remaining agglutinated at the pattern of those wooden panels, as material formula to not disturb the purity of the global volume. The different spaces of the central area, partially built without carpentry, make in several situations and perspectives, difficult to notice the seam between interior and exterior, remaining in that manner definitely tied in a direct way.

The house floats, it seems to be exempt following three guidelines. The physical: the plot is on a flooding area and with very little colonization, because of that it was advised to elevate the house. The spatial: the height difference allowed the pleasant dominant perspective from the interior to the garden, with innumerable references of the modern architecture. And the conceptual: the precise volume takes the ownership of the site as a pavilion, appears put on the garden, wishing to reveal its relationship with the people who lives over the space which is accepted, in summary identifying this paradox its “real context”.

The materials which define the volume, concrete and wood, are extended to the interior qualifying the domestic conditions, providing them with a natural comfort characterized by the warm aspect but at the same time dry of the materials. The continuity of the material and the texture of those elements change the perception of the spaces and transform the fact of living in a singular experience, keeping far of the popular and according with the type of live which pretended the ownership. Constructively, the concrete which defines the global volume, as an artifice, is incorporated in the interior defining the plane of floor and ceiling as exercise of minimums, with simplicity and coherence followed from the origin of the project being identified with the taste of the formal simplicity.

The furniture of the central space, being incorporated to the architecture is transformed as part of it, works as diaphragm which guides the way to the privacy of the bedrooms and at the same time allows stretching the living space until the limits of the private. Finally, the careful study of the lighting, defines different scenographies, being designed to not disturb the purity of the space. In the same manner, the volume and the garden are inspired with the same criteria.”