This modern home is a 2012 project by Pitsou Kedem Architects that was designed for a family living in Kfar Shmaryahu, Israel.

A system of wooden shutters allows the structure to be transformed into an indoor/ outdoor shelter. 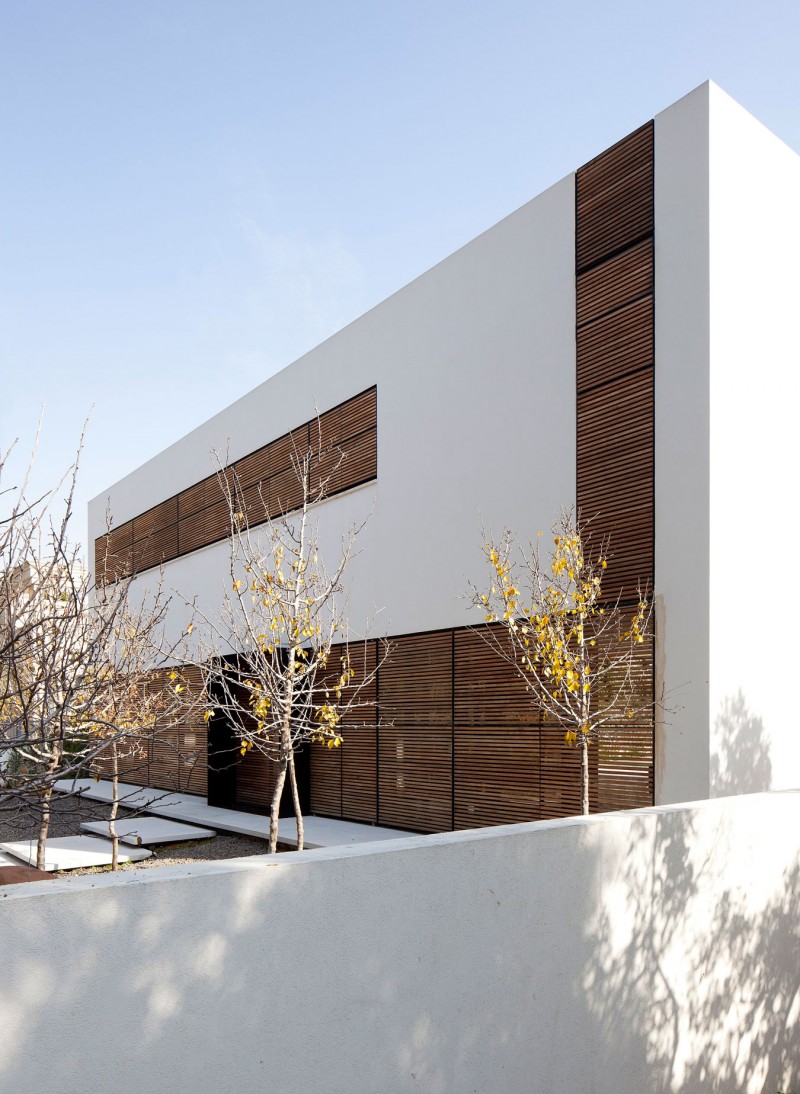 “The arrangement of objects in a given space or a defined format in order to give meaning to the placement and arrangement of the items,  The result of the relationship between the object and the framework of the artistic creation.

A private, family residence in an urban environment. From without, the building does not reveal that it is a home.

It resembles a mold or an artist’s canvas or an almost two dimensional frame within whose area various openings have been placed and which are enveloped with a dynamic system of wooden, linear strips.

The planar distribution of the “picture” or, in this case the front façade creates a non-symmetrical composition which pulls towards the flanking faces in an attempt to suggest that this is, in fact, a three dimensional mass.

The arrangement of the objects (the openings) is always fixed and allows for one central and permanent composition. The ability  to reverse the balanced composition into a dynamic one is made possible thanks to the design of a system of smart blinds that allows the blinds to be lifted upwards whilst they are folded into what resembles a roof.

All the rails and fixtures are hidden and so, when the façade is closed the dynamic and changing possibilities hidden in the residence’s façade are not apparent.

All the openings open separately and so allow for different compositions.  At any given moment and for whatever reason (privacy, protection from the sun) the relationship between the object and the plane can be changed.

Thus we can achieve a composition that is balanced, dynamic, haphazard, closed or open within the same framework.

Movement through the house is accompanied (thanks to the flexible blind system) by different views of the outside, some exposed and bare, others undisguised and others framing a section of landscape especially designed for it.

This selfsame changeability and flexibility also allows control of the amount of sunlight and natural light entering through the openings and into the homes spaces.

These spaces are characterized by a restrained use of materials and form so that the light penetrating the space creates a sense of drama, movement and dynamism which seems to breathe life into the souls of the silent walls.

Thus, in effect, the system of relationships between the street and the structure composed of changing, but two dimensional compositions on a framed and flat plane develops, for the user of the house’s spaces, an open area that incorporates abstract or tangible images with volume.

The relationship between these same volumes (the walls, the stairs, the various partitions and the different elements in the house) and the space, create, through the structures changing façade and the dynamism of the blinds, changing compositions, sometimes controlled and sometimes random with a new and different experience being created each time for the user and those living in the home.”