Apartment KAZ was designed by Gerstner Architects and is located in Tel Aviv, Israel.

The apartment has stunning ocean views and a soft and breezy interior to match. 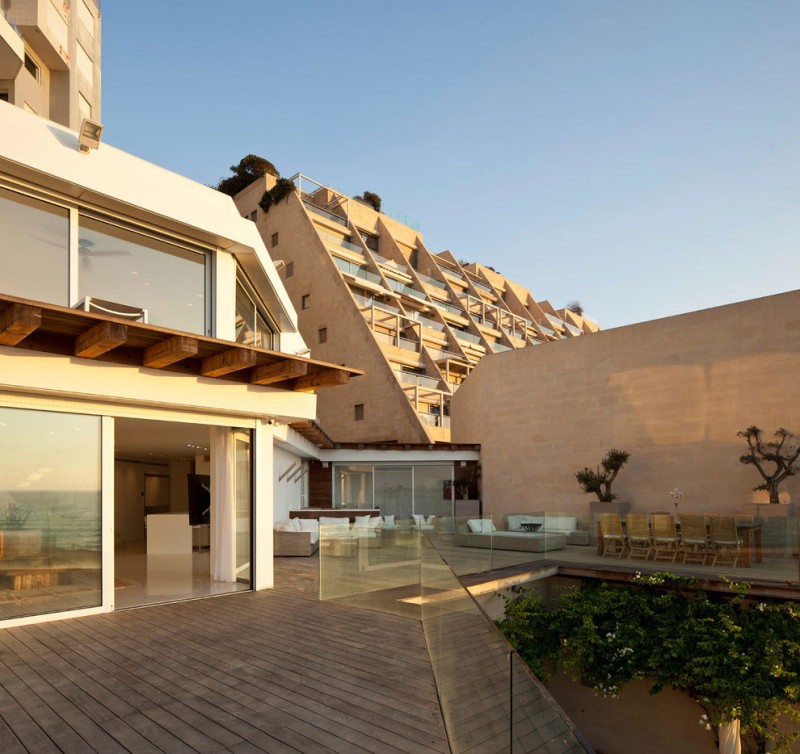 “This private residence duplex located in a residential complex in Tel Aviv was designed for a single business man, who lives and work from his own residency. The house therefore, provides two separate entrances, a private entry in to the heart of the living area and a public entrance through the garden terrace, directing to the external office.

The house is planned as a pure entertainment machine. The concept was to allow continuity between the inside and outside, to open the house to as much light and view to the exterior, a main attraction of the property. While entering the house, the user is exposed to an open kitchen and a large living room with large openings to the garden terrace. The large transparent barrier distorts the separation between inside and outside. The terrace directed to the sea with its lounge bar, kitchen barbeque area, Jacuzzi, dining area and sofas acts as an extension of the interior living space in to the outside.

The pure living space with it’s built in furniture hides and blurs the kitchen closets as well as the bathroom doors. The ethereal sculptress staircase engages the vertical space and brings more luminosity and lightness to the main space. These triangular cantilever stairs leads to the private section of the house. A transparent plasma glass wall creates a separation between the private and public sections, allowing a control of privacy over the guest users. The main bedroom suite, planned as an open room. The bathtub and toilette are exposed to the sleeping area as well as to the outside. A feeling of sleeping and bathing in the wilderness.

The office was planned as an extension to the house totally separated from the private area. It has as well, a full ocean view but is not perceived by the private user. Allowing a total separation between work and play.”

Small Contemporary Apartment with a Touch of Retro