This contemporary home by Robert Young sits on a lot surrounded by pine trees in East Hampton, New York, USA.

It is a 2008 renovation of an existing house that suffered from poor design and construction quality. 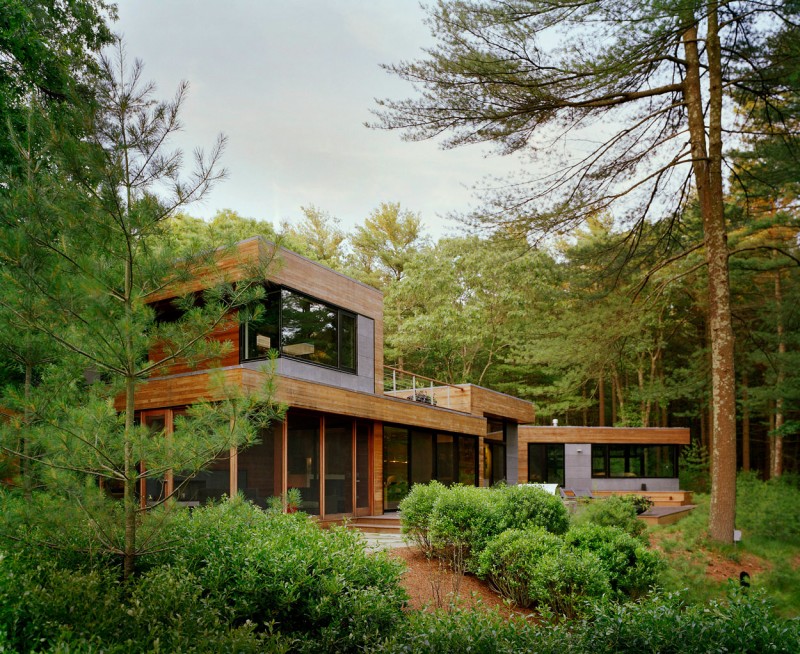 This project developed organically to respond to our client’s seven acre site, which was sheltered by white pines, offered unobstructed views of the water, and housed a beautiful kettle pond.

The property contained an existing house, c 1982, which was in need of a major renovation. Because of serious rot and the low quality of the initial construction, it was not clear that a restoration would cost less than a new house.

Our instinct is always to save and reuse things rather than throw them away, so we were keen to find ways to keep the house economically.

Surveys of the property indicated that the house was closer to the kettle pond than current town setbacks would allow; if we were to build a new house rather than renovate, it would have to be pushed back closer to the property line, compromising the privacy and water views that made this parcel so appealing.

While the existing house was full of quirky layout moments, such as dark narrow halls and high windows facing the view, the basic parti of the house worked quite well — living spaces bookended by the master suite and guest bedrooms.

By filling in a windowless courtyard and carport, we were able to enlarge the kitchen and dining areas, and add a den and a screened porch without extending the actual footprint of the house.

This not only allowed for extra space, but also dramatically improved the awkward flow between the existing spaces.

Without moving load-bearing walls, we merged the kitchen, living and dining areas into an open, flowing plan.

We transformed the appearance of the house with an economy of means using new siding and windows with accenting cement panels.

The windowless ‘silo’ stairwell was replaced with a rectangular stair tower with a simple but delicate stair of blackened steel.

Wide expanses of glass and exterior materials that cross over into the interiors, such as the cedar siding and cement panels, blur the line between inside and out.

The interior palette of natural materials, colors, and fabrics is juxtaposed with occasional strong contrasting elements, complementing the surrounding woodlands.”