Completed in 2008, this residential building is located in Richmond, a suburb of Melbourne, Victoria, Australia. 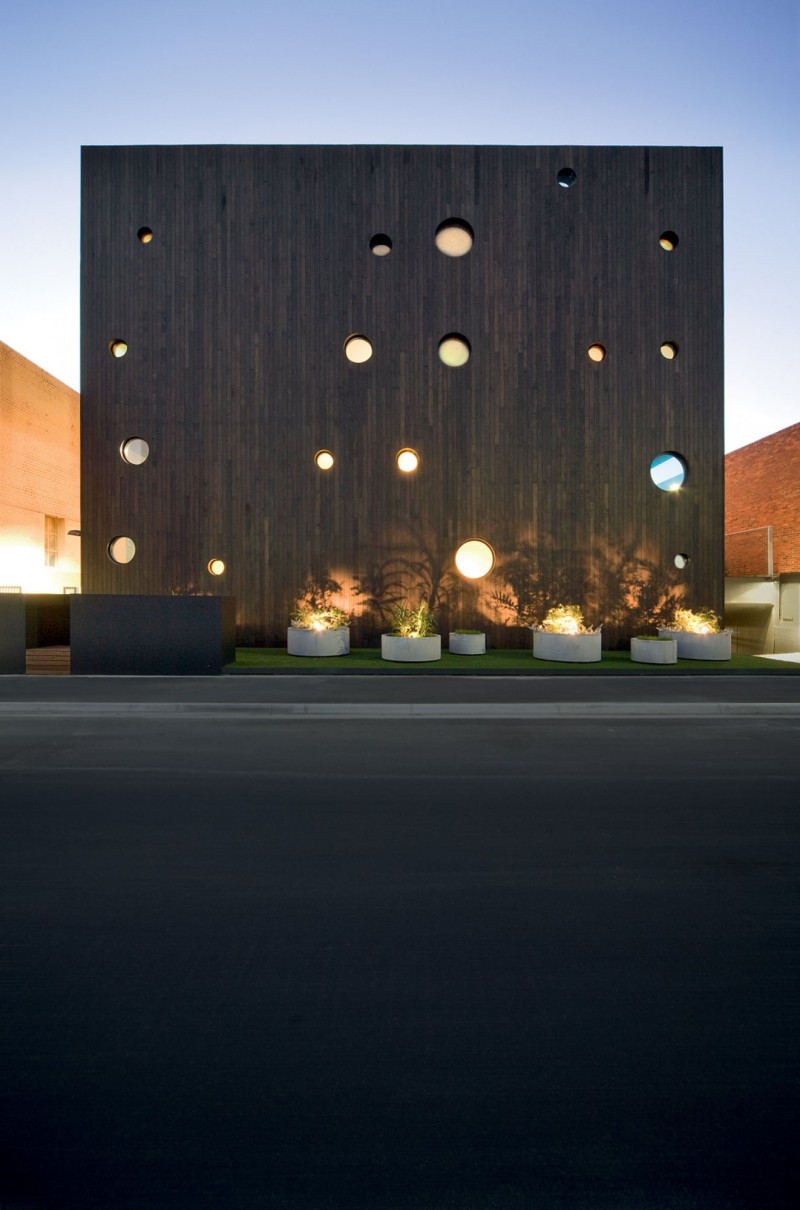 “Hue is a 5 storey apartment building that sits within a post industrial streetscape in Lord Street, Richmond. The site is bound on 3 sides by large 2-4 storey brick warehouse buildings whilst across the road are the rear yards of residential properties.

The brief was for a multilevel apartment building that maximised yield on the site. Our design strategy was to imagine the site as a landscaped island within its austere industrial surrounds. The building could then sit as a singular, sculptural object within this landscape. Growing creepers on screens built on perimeter fences would also ensure that a garden aspect could be created for units within the development. Slightly rotating the building on the site amplifies the relationship of the object to the landscape and its surrounds, as well as creating opportunities for early morning or late afternoon sun access – particularly to south facing apartments.

Programmatically we have attempted to create a hybrid building that contained a variety of accommodation types that could attract a diverse community of inhabitants. Two storey townhouses with large northern courtyards occupy lower levels, one and two bedroom apartments sit above them and two level penthouse apartments with roof terraces complete the sectional assembly. This arrangement is cost effective in that it has maximised yield and minimised the extent of common area corridors to only 2 levels. It has also maximized northern orientation – with 25 of the 29 apartments within the development having primary northern aspect.

The building is divided into a series of 5.4 metre wide bays that are derived from the two storey terrace house party walls at lower levels. Upper level north and south facades are either timber or glass louvre infill bays between the party walls. The louvres offer opportunities to control noise and ventilation, as well as allowing balcony spaces to be sealed as sunrooms within winter months, effectively increasing liveable spaces within the apartments.

Lower level townhouses run the full width of the building and enjoy opportunities for passive cross flow ventilation as do the upper level penthouse living spaces.

The eastern and western facades are sheer 4 story walls that bookend the building. They are articulated by a series of circular windows of varying diameters that break the mass of the wall plane down in an engaging and abstract manner. The façade becomes an enigmatic presence within the street. The dark stained cedar cladding serves to amplify the textural and experiential qualities of the building as well distinguish the development from others in the marketplace.

The building also offers a public space to the street in the form of its landscaped forecourt area. Here various circular concrete planters are scattered on an artificial turf ground plane, the planters appearing as if they could have just fallen out of the façade. As the vegetation in front of and around the site grows and develops, so too will the timber weather and gently fade, reinforcing and consolidating the building’s presence and within its evolving context.”