In 2013, Innarch created this contemporary interior for the Don Coffee Company in Pristina, Kosovo.

It was constructed from 1365 pieces of specially cut and formed plywood to create the impression of being inside a crumpled bag of coffee beans. 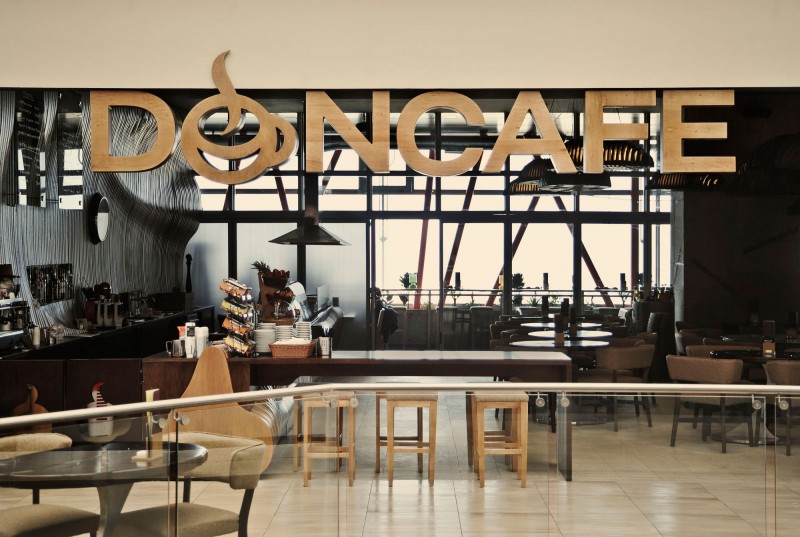 “Don Café House is the first concept introduced by the Don Coffee company in Kosovo. Its idea was the expansion of the business by offering to the clients a greater possibility to taste their products in the new environments of the Don Café House in a pattern of chain setup across the territory of Kosovo and beyond.

Through studies and researches conducted into Don Café, Inarch was able to come up with a unique conceptual and visual concept expected to distinguish it from other traditional coffee bars by giving it a modern image.

The idea / inspiration for the design derives from sack filled with coffee grains.

The walls of the bar are organically shaped and colored like coffee sack made up of “Plywood” type of wood, whereby the pillars in between are coated with textile coffee sacks.

Tables and hanging chandeliers represent the coffee grains lined up asymmetrically in order to generate the impression of being inside a coffee sack.

The separating wall has a double function; decorative and functional.  Its organic shape consists the most dominant part of the premise enabling a unique feeling of sitting unlike any other one comes across in everyday life.

Right the middle of the bar is equipped with seats and tables also unique by their design establishing a connection in-between the environment by separating wall and the bar.

The separation wall section is completed by the section behind the bar achieving thus the closing shape of the sack. This section performs the display role for the articles of the company.

The bar shape plays an important role too in the functioning of the bar by generating diversities in sorts of coffees and the taste on the menu card. The outer perimeter is coated with a sort of organic layer yielded by the 4cm plywood parts and reflects/depicts the dynamism of the bar itself.

The project was accomplished by the 2cm and 4 cm thick plywood material.

For the purposes of generating the designed organic shape, the whole plywood material was shaped in CNC machine separately in parts and ultimately assembled.

Each of the plywood element was designed individually. This because for the creation of an entire organic shape, each of the element needs to be designed separately.

The entire premise consists of 1365 pieces of plywood, each dimensioned, designed, cut and assembled.”

Vacation Rental Office Located in Singapore was Designed by OSCA