Matthews McDonald Architects created this contemporary residence in 2012 for a couple living in South Perth, Australia.

It boasts panoramic views of Perth as well as the Swan River. 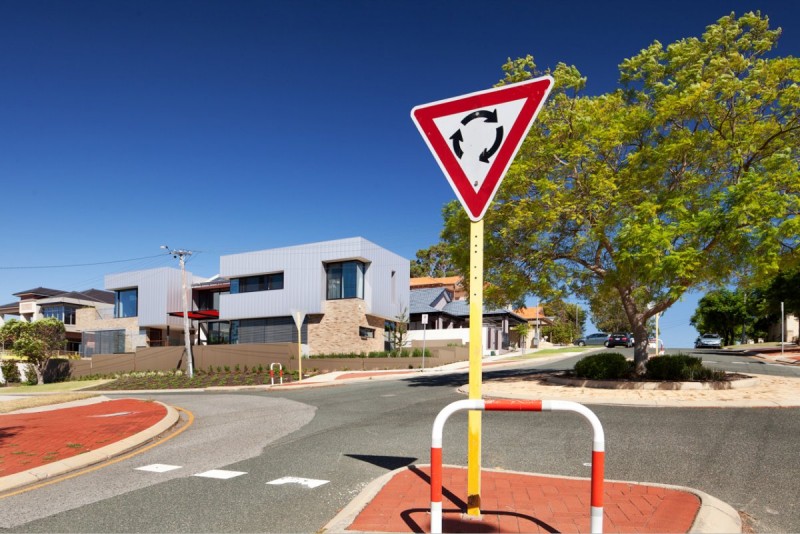 “This new home for a couple is located on a corner, narrow, sloping site at the east end of South Perth with sweeping panoramic views of the Swan River and Perth City that extends from Kings Park to the Darling Ranges.

Our clients had lived at the address for a number of years and enjoyed the amenity of the area however alterations and additions to the existing house by previous owners had resulted in a compromised spatial layout and a building that had considerable construction defects.

The initial briefing by the client was to demolish the existing house and rebuild a comfortable family home using steel framing.

Our response has been to create a house where each room takes advantage of the views and has a strong connection between the internal and external spaces. In contrast to traditional suburban development the house wraps around a courtyard that forms the main outdoor space.

A gallery space links the two building forms. Built over three levels the basement contains the service spaces, with living and sleeping on the entry and upper levels.

The client’s love of cooking and entertaining has been given careful consideration, as has been the need for a degree of flexibility in the way the home will be used during different times of the year and for the couples extended family and friends.

While the house is unapologetic in its form and use of materials, it responds to its context in a number of ways. The bulk of the house, particularly along the exposed length, has been broken down into smaller components and different materials are used to articulate parts of the building.

Masonry walls create a podium and backbone for the steel and glass boxes and the boundary walls define the external spaces while also providing a backdrop to verge planting and contributing to the appearance of the streetscape.

To minimise energy consumption and environmental impact, passive systems and initiatives such as single zone planning, compartmentalisation and double-glazing have been employed along with a considerable investment in active systems.

Photovoltaic collectors, rain water harvesting, mechanical shading devices and a hybrid air-conditioning/ventilation system have been used as part of this commitment.

For the client’s, the house is the outcome of spending many years working and living in the harsh environment of the northern parts of Western Australia yet represents their love of the beauty of the landscape with its wide open spaces, colours and strength.

Over time, what began as a simple brief came to incorporate a far greater vision and is ultimately testament to the importance of good clients.”

Home in Perth by Cambuild