Home » House » The Me Too House by LADAA

LADAA created this modern residence in 2013 for a client living in Sagunto, Valencia, Spain.

The exterior was intentionally designed  to appear understated and minimal, while the interior was designed to feel luxurious and spacious. 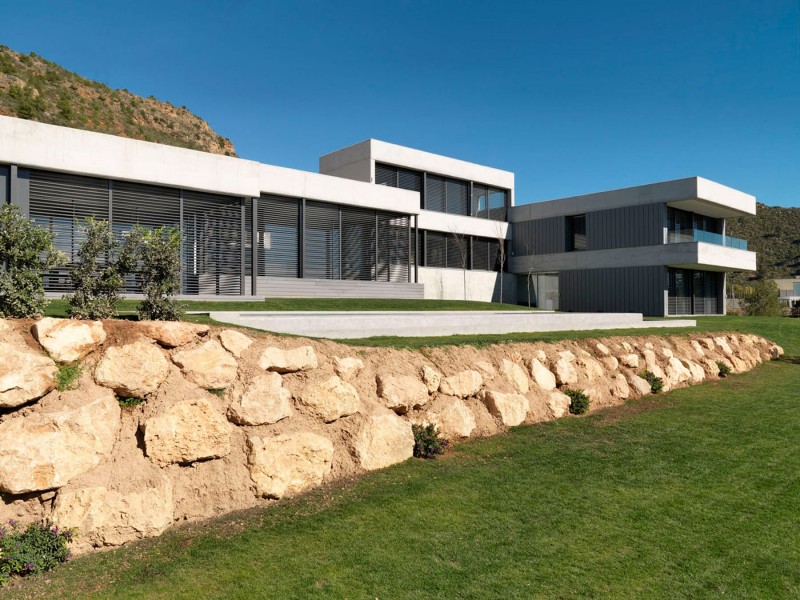 The Me Too House by LADAA:

“The building consists of four interconnected volumes each with a different height, thus reaching for the maximum integration with the topography of the surrounding area and a natural decomposition of the requirement program.

Almost didactically the architecture tells us what is happening inside.

At the same time the volumes are articulated to generate a large private garden open to the sun and the surrounding views. The whole house is built with load-bearing walls of gray concrete and steel columns. Outwardly the gray concrete, zinc panels and glass walls with anodized aluminum frames materializes the four volumes.

With the decomposition of the requirement program into four volumes, we reached several objectives planed when analyzing the plot and its location. The first was to colonize the whole plot, making the area ours and eliminating any lost zones, the second was to search for a house with spatial continuity where the program wasn’t divided into stories as in a conventional building.

For this we for opted for a spread-out at half-story intervals of the volumes, which in turn allow for adaptation to the natural slope of the area, something fundamental in the relationship with the exterior.

The break with the traditional separation between inside and outside, which thanks to the local climate we can control to suit the user, according to their needs, with flexible and mobile closings.

An important aspect was the idea of humility. Outwardly we wanted to show the house as quiet and simple. And on the inside changing the scale, here showing it as extroverted, exaggerated and luxurious.

Access to the house is through a two-story volume that opens to the north by a concrete canopy that serves as outside parking and to the south the views with the lobby and a library on the top floor. This part serves as the hinge between the Day area and the Night area.

The Day zones are divided into two volumes with one story each. One for the kitchen and the service area, and one for the living room. Inside, the transition between one volume and the next is solved with small steps, which solves the height difference the volumes present externally, in a natural way.

Thereby enhancing the idea of spatial continuity and facilitating the circulation of the users. As for the technological part, it’s noteworthy that thanks to a cross ventilation system we have been able to eliminate the artificial air conditioning normally in use during summer.

The operation of this system is carried out by a system of sliding windows present throughout the house, some motorized and retractable with adjustable blinds.

For heating we have used a system of low temperature convectors embedded in the floor, always under and parallel to the large windows to reduce heat loss.

As for the lighting system, the large windows are the main characters, which virtually disappear, incorporating the exterior into the interior space.

For the artificial lighting a special ceiling piece has been designed, which serves to hide the curtains and generate linear lighting strips with LED’s, parallel to the windows empowering their presence in house and their character of glass walls.”

The Petit Chateau, a Luxury Ski Chalet in Courchevel