Modo Designs created this contemporary home in 2013 for a client located in Aranya, India.

It is a sprawling, single-level dwelling surrounded by lush vegetation. 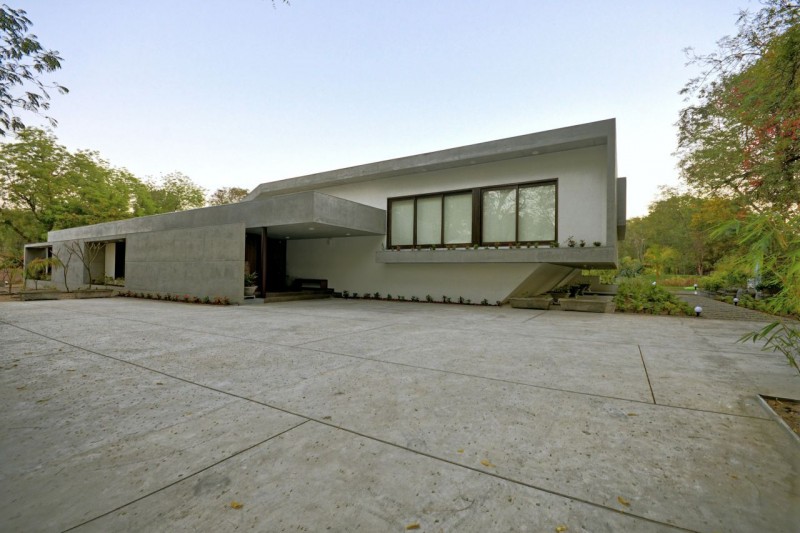 “Designed as a single floor dwelling, this house is a luxurious sprawl in the lap of a natural surrounding. The house is responsive to the series of palm trees that existed before and essentially orients itself towards it. It is designed to be inclusive of the natural elements- the sun, earth, water, air and fragments of the blue sky.

The layout segregates through a level difference, the parent’s and son’s living units and yet unites through a meeting place, which is the more open central bay. It’s a linear organization that separates the front street side from the rear garden and gives the garden a sense of privacy. From the garden side it’s a low stretch of a horizontal formation, parallel to the line of the ground.

The house is basically a three bay organization with the first bay towards the street that forms the parents, guest and kids bedrooms, the central which forms the transition areas the living area and rear court, while the last bay towards the garden is master bedroom, sitting area, the formal drawing and dining area.

The front yard is stark having cement and sand finished base that matches with stark exposed concrete walls and complemented by white walls. The flooring of internal spaces is Italian marble while the semi open verandah and courts have brown river finished kotah stone.

The internal spaces mostly has white walls, wood furniture and fragments of exposed walls which becomes backdrop for the colourful fabrics, artifacts and artworks which has been collected from different parts of India. The back yard has wood & glass doors and windows that open generously towards the garden.”