It is a renovation and extension of a cottage that juxtaposes original detail of the existing structure with new elements. 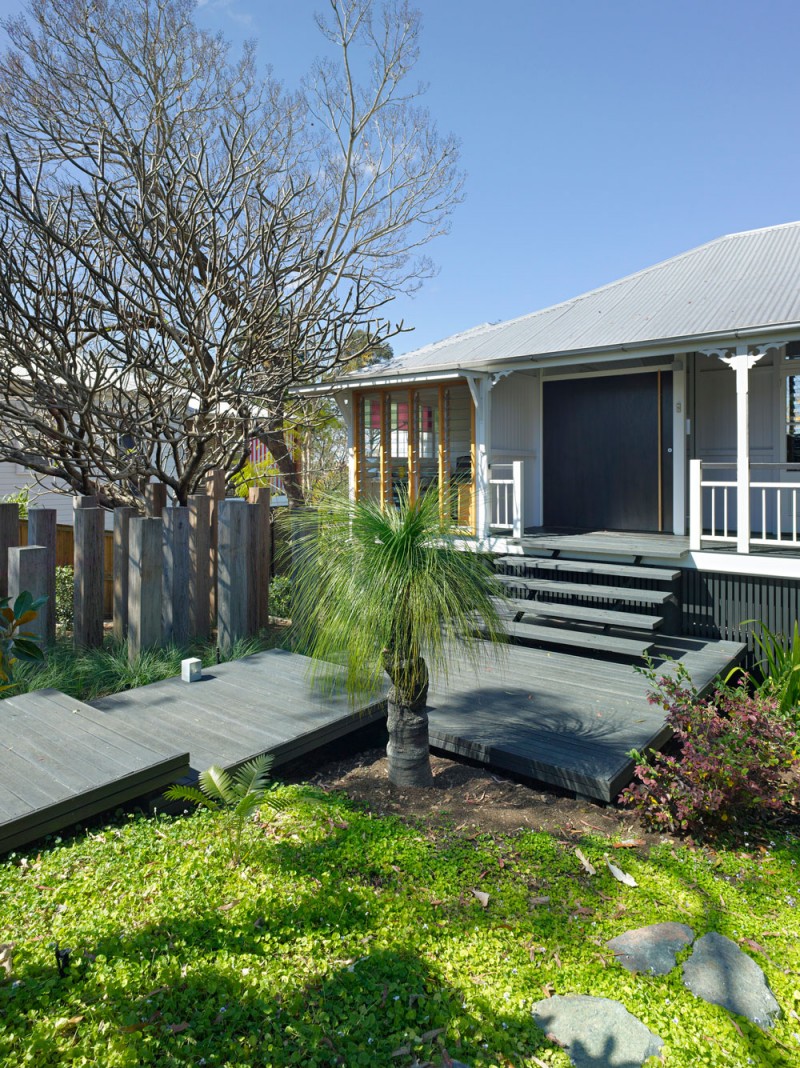 “The Taringa house, originally a four-room worker’s cottage is located along Stanley Terrace, a traditional street lined with character housing in an inner west suburb of Brisbane.

Topographically, the street follows the natural ridge line of the area.

The site falls away from the street, sloping to the rear boundary. This rear boundary is bordered by a creek and lined with sub-tropical vegetation. These landscape conditions are common to many of the properties that run parallel to Stanley Terrace.

The program, driven by the desire to accommodate the majority of family activity within the addition, has generated two juxtaposed but contrasting building forms defined in this text as the ‘old’ and the ‘new’.

Pragmatically, the ‘old’ cottage functions as an entrance from street level, also accommodating a guest bedroom, bathroom and overflow living space. The ‘new’ addition is the core of everyday living in the house. It contains the kitchen, main living area, dining and bedrooms.

The existing cottage and the addition are articulated as separate identities. The cottage retains its principal role of addressing the street and tying into the existing street fabric. The addition faces the rear of the site and celebrates the landscape.

The functions of the old and the new remain distinct; public and private, street and backyard, visitor and family, entry and living. The cottage retains much of its original detail, whilst the addition is contemporary in form, which is not immediately apparent from the street.

A priority within the brief was to ensure connectivity between the living spaces and the natural ground.

Sites that fall away from the street, often allow entry at ground level at the front of the site, however, as the site slopes, result in indoor and outdoor living areas to the rear of the site raised high above natural ground and disconnected from the ground. This relationship to the natural ground was resolved through an internal staircase, which strings the point of entry at the cottage to the main living area at the lower level.

The circulation spine begins as a small insertion at the entrance to the cottage, unfolding to become an intrinsic part of the new addition.

Connecting the two contrasting building forms, the circulation spine creates a ceremonial entrance from the existing cottage at the top of the site.

A key element of the existing landscape is an existing Jacaranda tree located almost in the centre of the site. The Jacaranda has been retained and celebrated as a focal point to the addition.

A double height glazed living area central to the addition opens out to the Jacaranda and sub-tropical vegetation of the backyard, blurring the boundaries between inside and out.

Accommodating the main living space in proximity to the natural ground level has meant that the addition has been cut into the slope on the high side of the site. This has created a single storey structure where the addition meets the adjacent existing cottage that matches the scale of the cottage.

A Spacious Home in Armidale Designed by Those Architects