This modern extension is a 2012 project by Jonathan Lake Architects that is located in Western Australia.

The Rammed limestone walls serve as a contemporary interpretation of the rubble walls found in the existing house, uniting the old with the new. 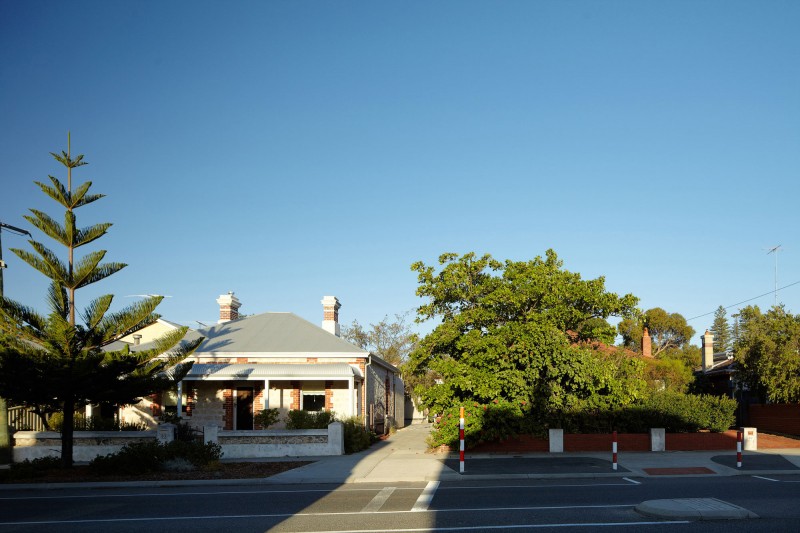 “This project is a highly crafted and tactile addition to a beautiful limestone colonial bungalow. It is an addition that draws heavily on the physical and material character of the existing house and sought to provide a contemporary re-presentation of these elements.
Section

The original house faces a main road and sits on a subdivided block with shared vehicular access to a contemporary house built at the rear. Ideas about where to locate the new addition were pre-determined by the heritage character of the house and minimal space available at the rear because of the vehicle access.

The brief requested a simple replacement of the existing fibro lean-to at the rear that contained the kitchen, dining, bathroom and laundry.

The only additional request was for a separate ensuite off the main bedroom. Formally the original house is a corrugated iron roof over rough heavy walls with dark interiors and no connection to the external environment.

The limestone rubble walls create a striking roughness and texture to the exterior while internally creating deep thresholds between spaces.

The new addition takes these qualities of material, light and tactility and reinterprets them to create a series of spaces that are designed to elevate the experience of living.

Rammed Limestone walls were created to continue the weightiness of the existing but to introduce a more tactile surface. Over the walls a dynamic metal clad roof structure has been carefully placed.

The profile of the roof reflects its role in opening up the interior bringing light and ventilation deep within. The texture of the cladding gives the roof a visual tactility through the play of light and shadow over its surface.

A significant problem in additions and alterations is how to connect the new and old together. Because of the strength of character of the existing the new roof and walls have been pulled away from the existing house in order to emphasize the qualities of each. Where the two forms touch the materials have been reduced to almost nothing.

The roof has been flattened to tuck underneath the existing and the walls stop short and glass has been introduced.

This project is a careful exploration of materials and restraint in order to create a generous living environment. The new internal living spaces have been augmented by the introduction of external deck and garden spaces. Cavity sliding doors open up to allow for the boundary between these two spaces to be erased.

The creation of the decking also allows for the introduction of green spaces and landscaping which previously was not possible.”