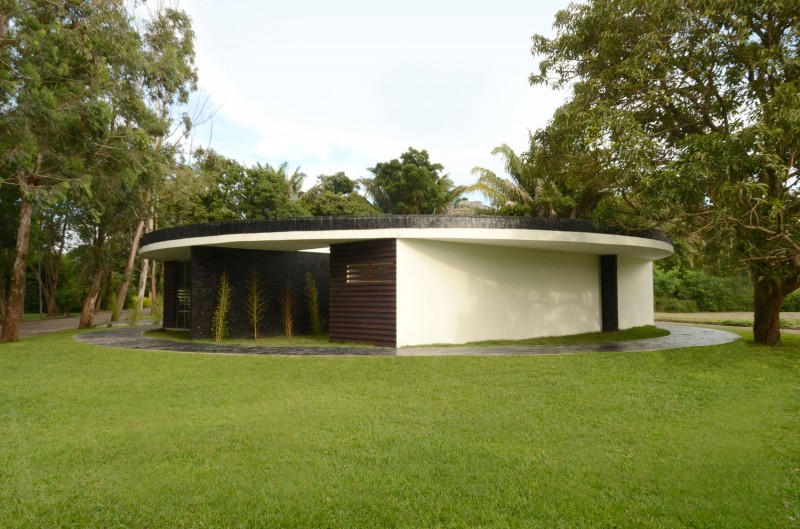 “This house inspires security and balance through its square form. Immersed in a round base, it inspires creativity and harmony from the sky. These two shapes -sky and earth- are present in the Chinese coin.

The main shape of the Chinese Coin House relates to prosperity. On both its sides, the Milky Way was expressed, utilizing the concept that irradiates prosperity.

All the house’s measurements are based in the Golden Number (or Golden Ratio): number Phi (Fi) Phi: 1,618. This number is found in the geometrical distribution of patterns, such as sunflower seeds, a bee’s body, even in the human body. Ancient Egyptians used this concept to build the pyramids. Ancient Greeks used it to build the Parthenon. Leonard da Vince applied it to his masterpiece: the Mona Lisa. The Eiffel Tower was also built under this same principle.

Many of the ancient cultures that accumulated a profound wisdom applied to the functioning of nature, gave a transcendental importance to location and to the way houses were built. Throughout centuries, observing the interaction between house and man led to the wise conclusion that our inner coherence, physical and mental health and our abundance and happiness depended on how our houses were built. There are several schools of thought that have recovered and restructured this wisdom.

When building a house today, it’s no longer possible to ignore these factors. Some examples are determining a location site according to the earth’s electromagnetic lines irradiating low intensity gamma rays; distributing interior spaces in a house, considering location of the four cardinal points, or using the golden number or ratio phi to establish the proportions of longitude, depth and volume (this measurement is needed to recreate spaces, giving its inhabitants stability and harmony). The Chinese Coin house was conceived considering all these principals, providing characteristics of an immeasurable value for the wellbeing of the family and guaranteeing the house is constituted as a real energetic battery. Some of them are:

-The location of the house sets the room’s orientation in an open area, free of any negative effect that might be created by the crossing of electromagnetic lines, heightened when subterranean water currents meet.

-The harmonic traces of design follow the shapes and proportions of the sacred geometry, imitating perfection of the universe.

-The definition and location of the main door of the house guarantees that the chi, the vital energy, will be attracted inside, in a unequivocal and generous manner.

-The distribution of interior spaces of the household follow the order of bigger over smaller, establishing the dormitories, living room, kitchen and bathrooms, according to the four cardinal points.”

Wo House by SO Architecture

House in Comporta by RRJ Arquitectos

House in Foz Do Duro II by Jose Carlos Cruz

The Shelter by Nha4 Architects