This modern project by Antonio Altarriba Comes consists of a total of seven residences in Rocafort, Valencia, Spain.

Each home features a ground floor that is open to the exterior as well as a glassed-in void that runs between each floor, acting as a light shaft. 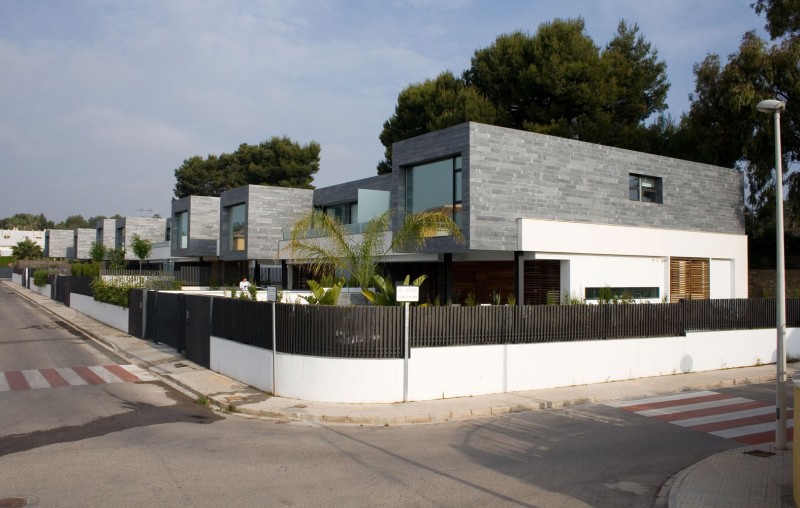 This project, consisting of six semi-detached houses and an isolated one located in Rocafort (Valencia), tries to get homogeneity and order of the independent units creating a whole.

Basically, there are three different types of houses: on the one hand, there are two different distributions for the semi-detached houses, and on the other hand the isolated house, which works generating the whole group but keeping its own identity as a single-family house.

The whole group is a combination of different pieces that come together indifferently, getting the suggestive unity of variety that is the pursuit of contemporary architecture.

The volumes consist mainly of two elements: the ground floor, which is completely opened to the exterior through its north and south sides and closed by white walls in the east and west façades, and the upper floor, built with natural stone, which lay overhanging from the ground floor with drilling façades depending on the interior needs.

Both floors are connected by a courtyard which is the main distributor of the inside spaces of the house. Therefore, the courtyard becomes the main void in this project and contains light materializing it like a “bright prism”. The light is distributed around the house, turning into the “light soul” of the house depending on where it is located.

The courtyard turns into a void sculpture which drills the houses hearths. The small surface of the courtyard and its façades, completely built in glass, filter the light and the air creating a faint atmosphere. One can even enjoy the great visual feeling of the rain falling during the stormy days or gaze at the moon and the stars from unexpected locations inside the house.

The light is able to materialize the interior space, both by day and at night. During daylight, big amounts of light get into the house through the big windows.

The light is coloured and materialized by wooden slats that protect the windows of the ground floor.
At night, through artificial light, the houses turn into a container of the bright void. This is a significant effect to understand that in some dots the inside part of the house extends indefinitely to the exterior.

Regarding on the program, all the houses consist of living room, dining room, kitchen, utility room and bathroom in the ground floor and three bedrooms, two bathrooms and a dressing room in the first floor.”