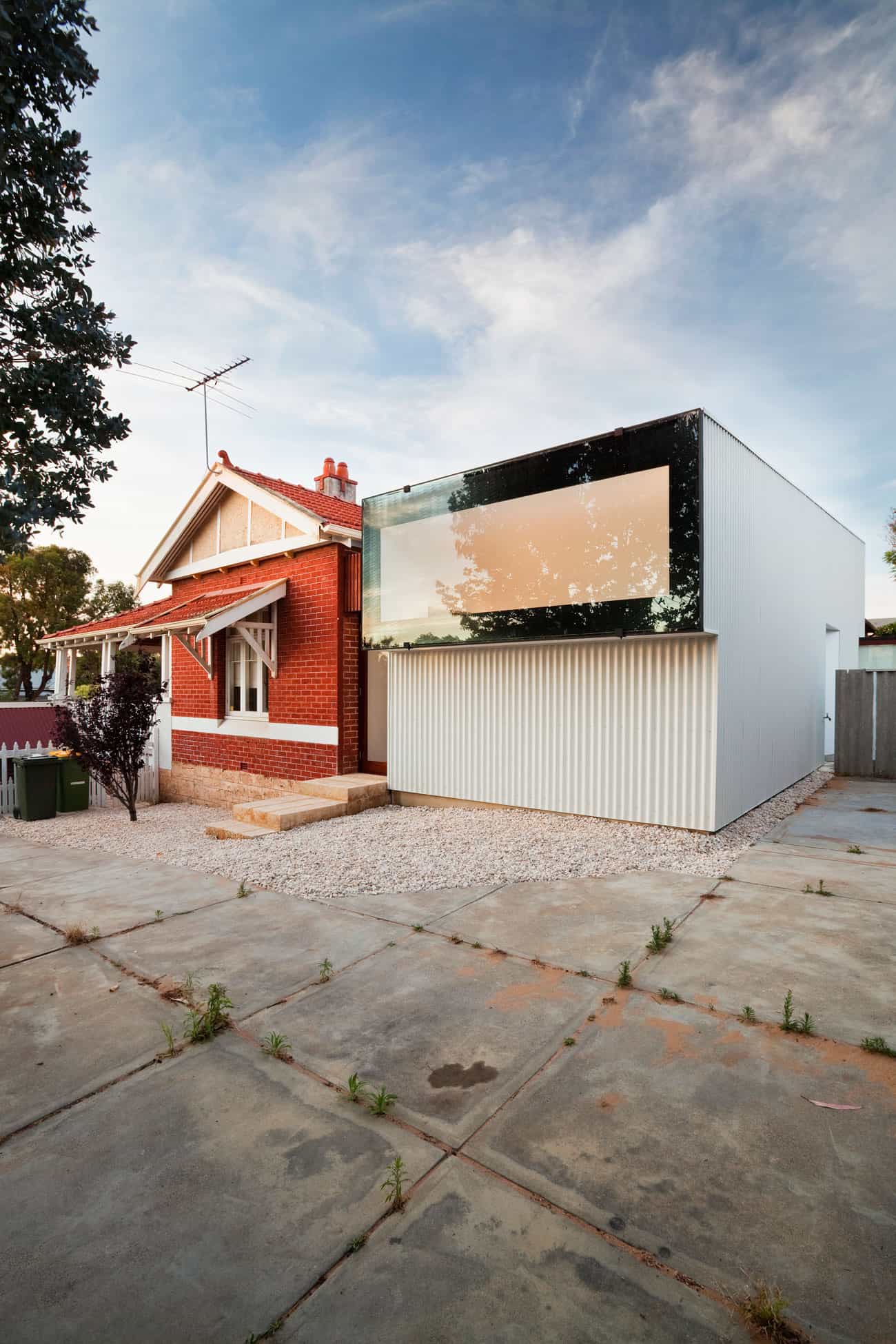 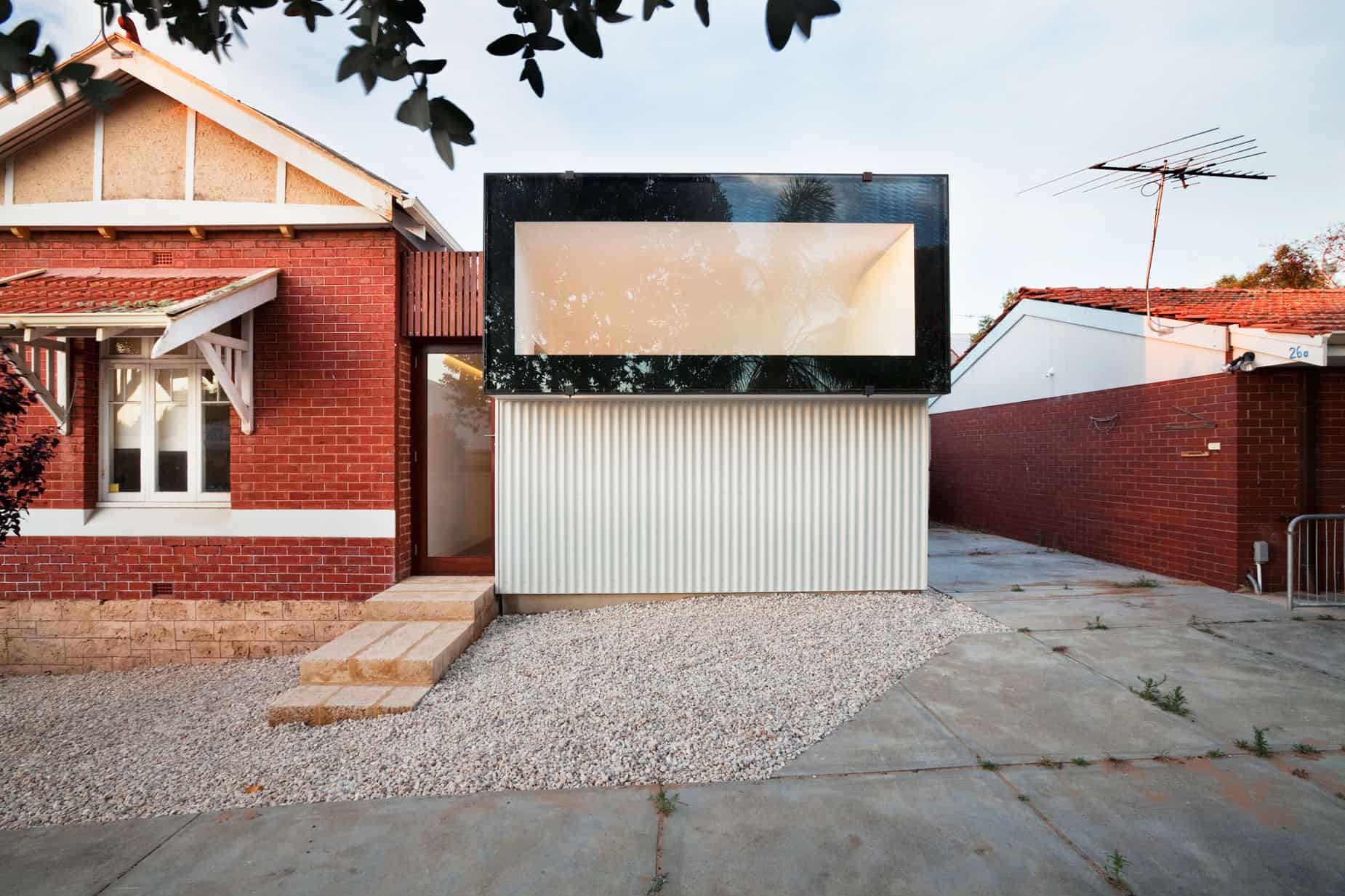 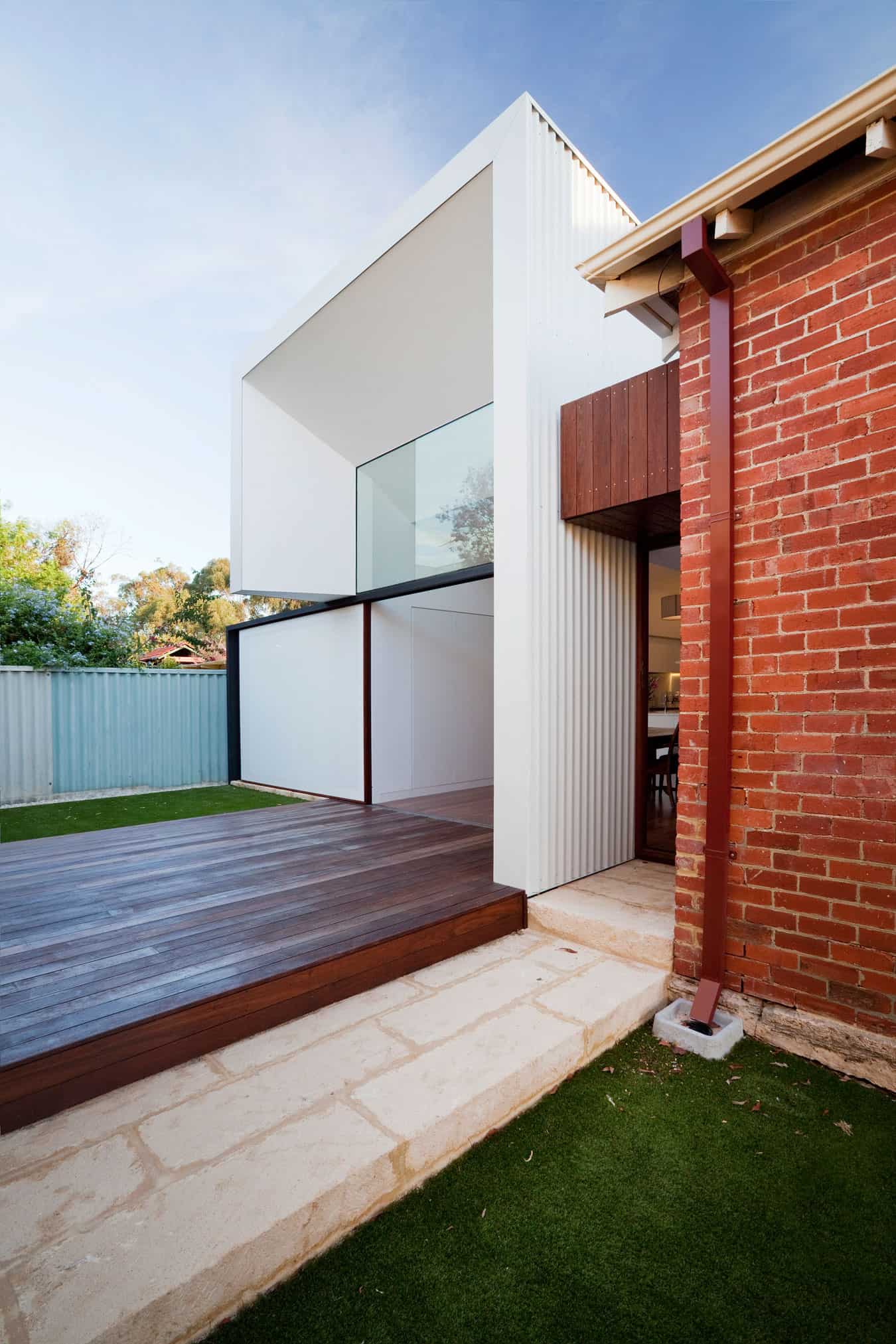 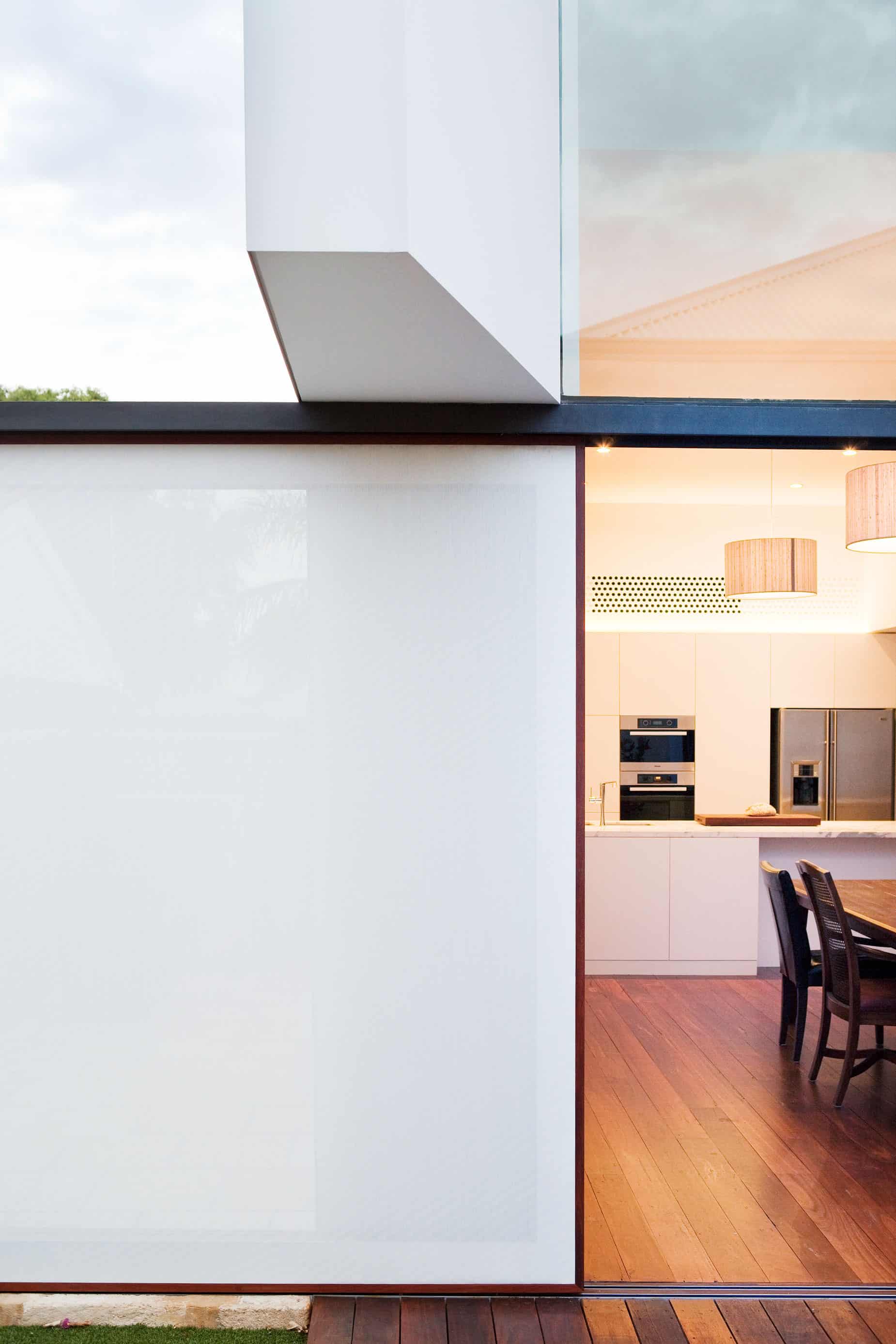 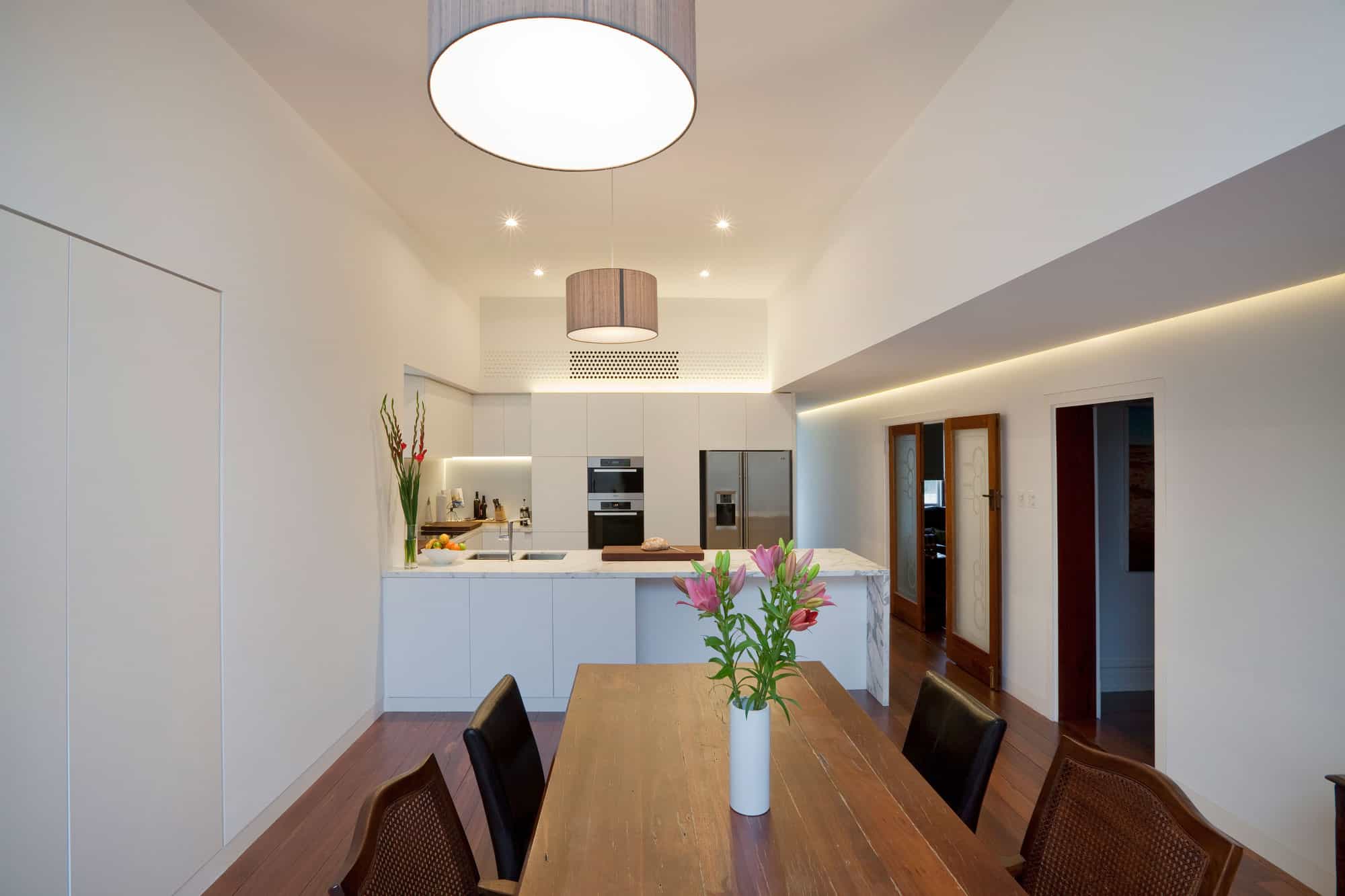 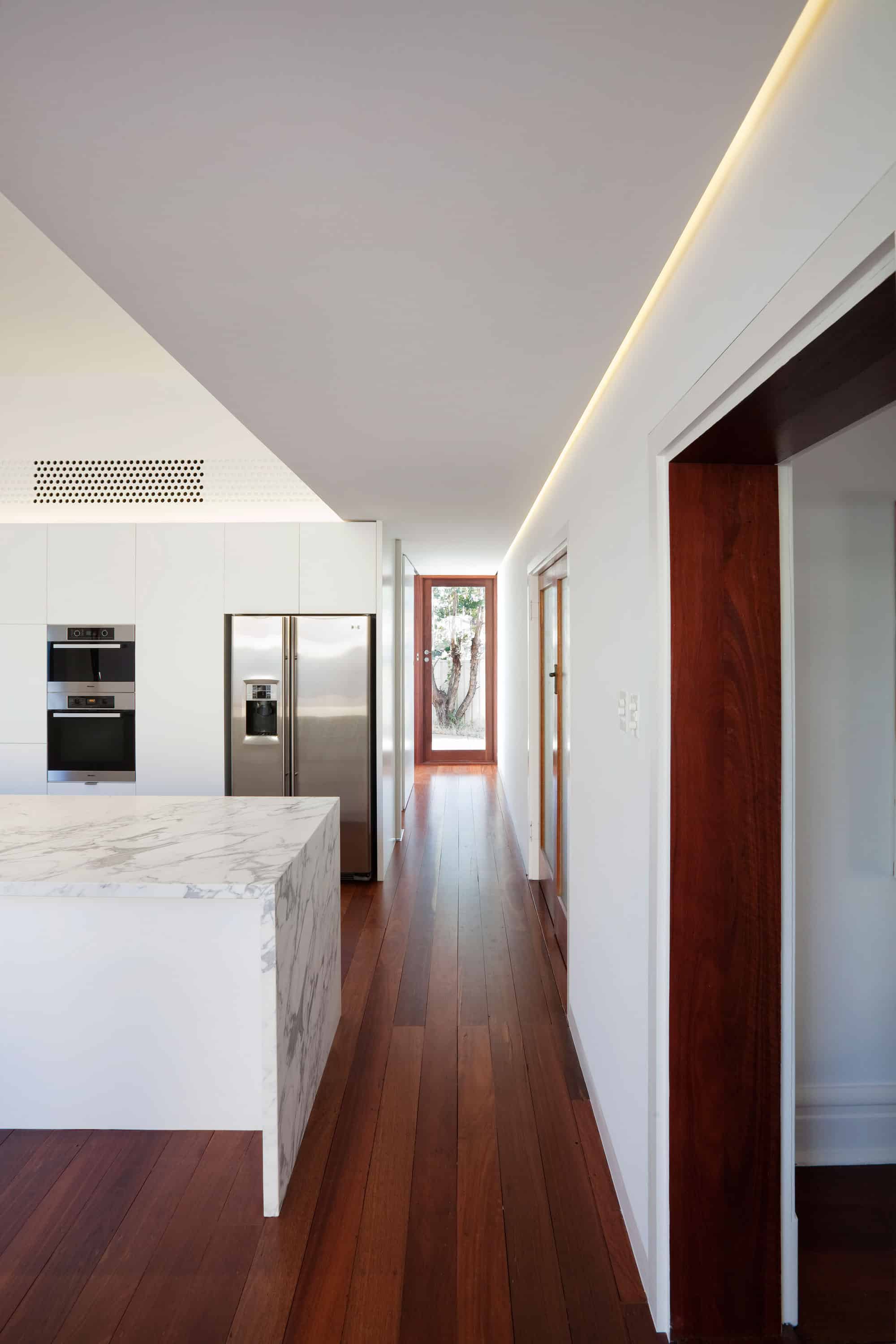 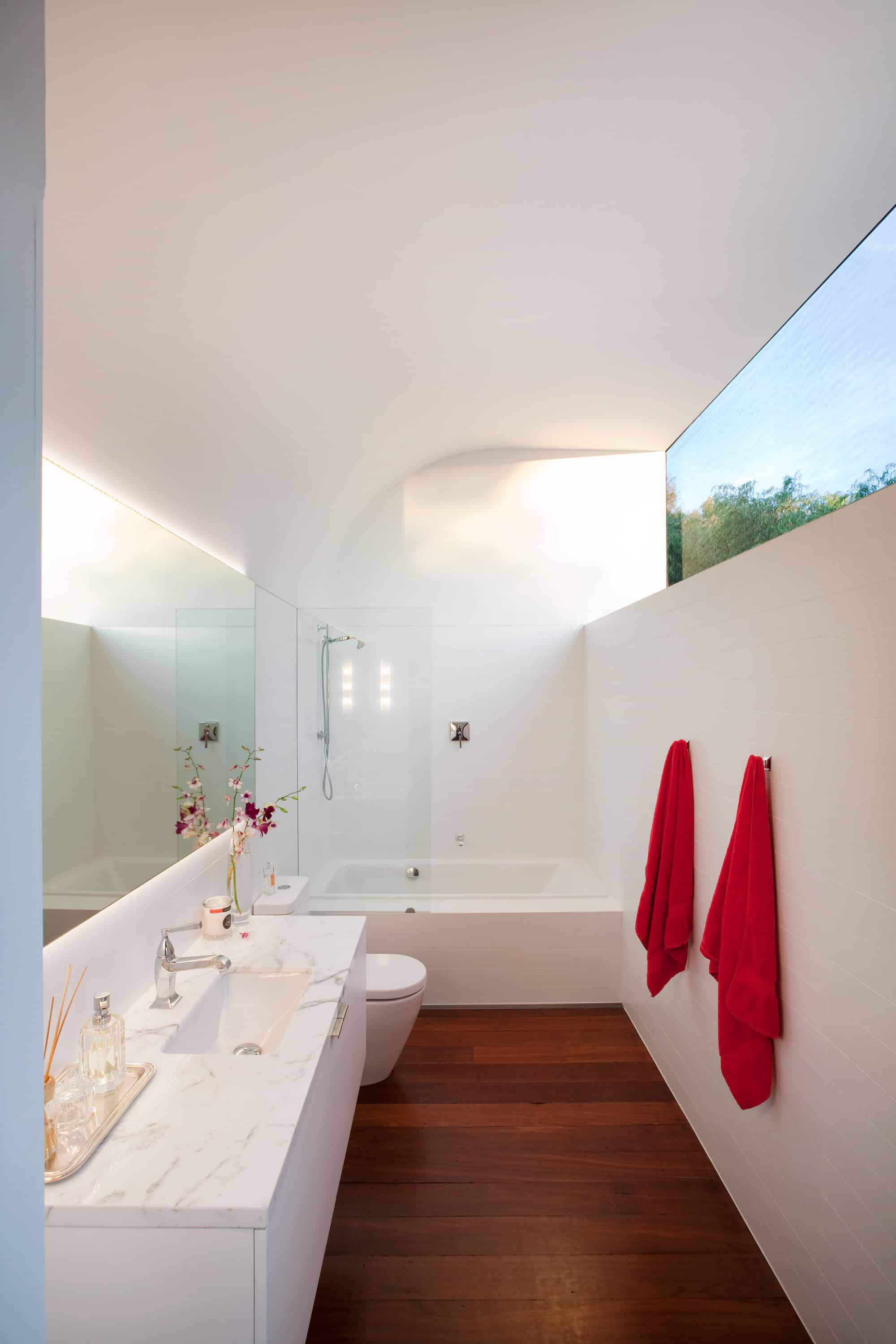 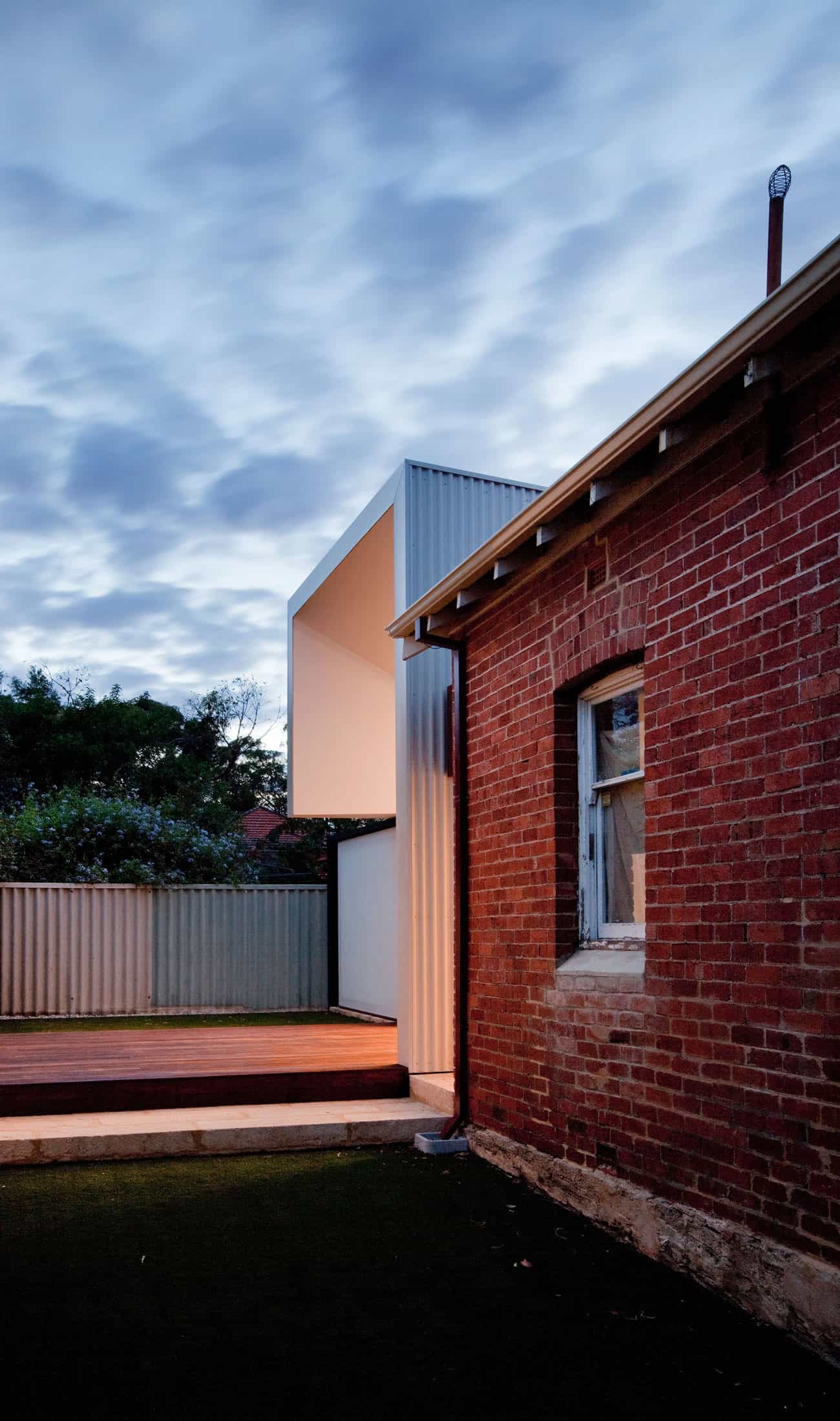 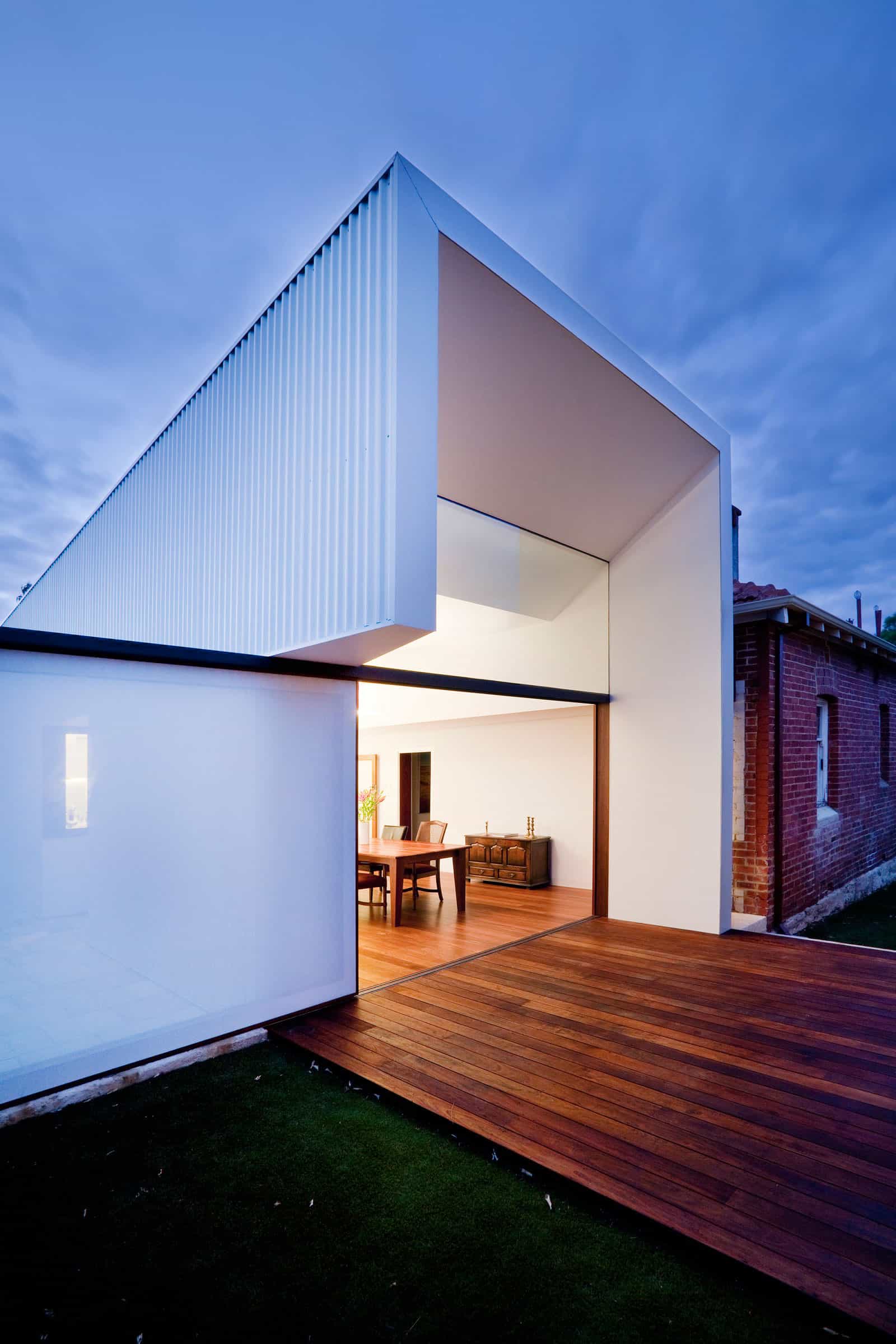 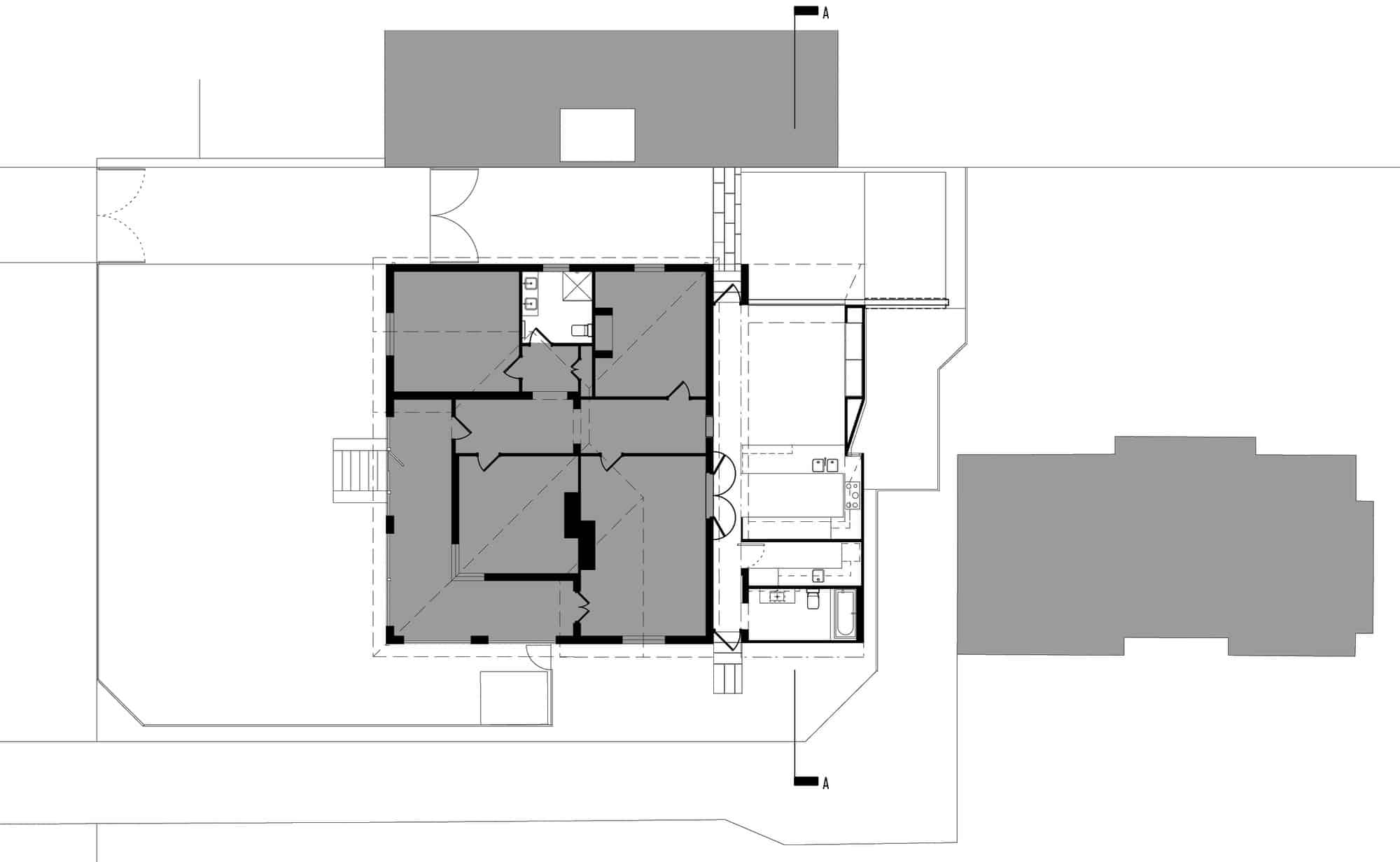 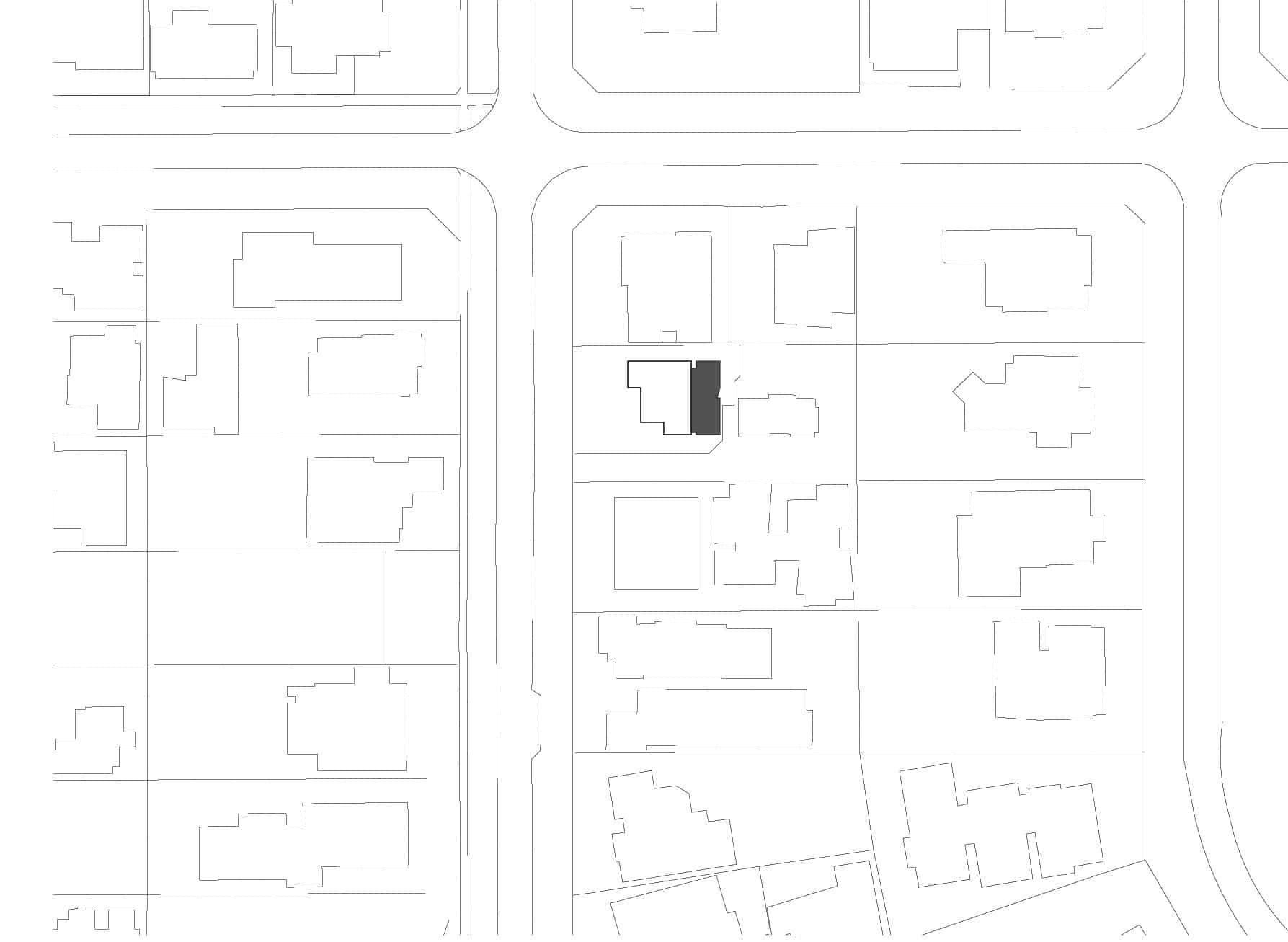 David Barr Architect created this modern renovation in 2011 for a client living in Perth, Australia.

Instead of using a hi-tech approach to sustainability, the designers focused on simpler ways to maximize efficiency which included reusing as much of the original home as possible. 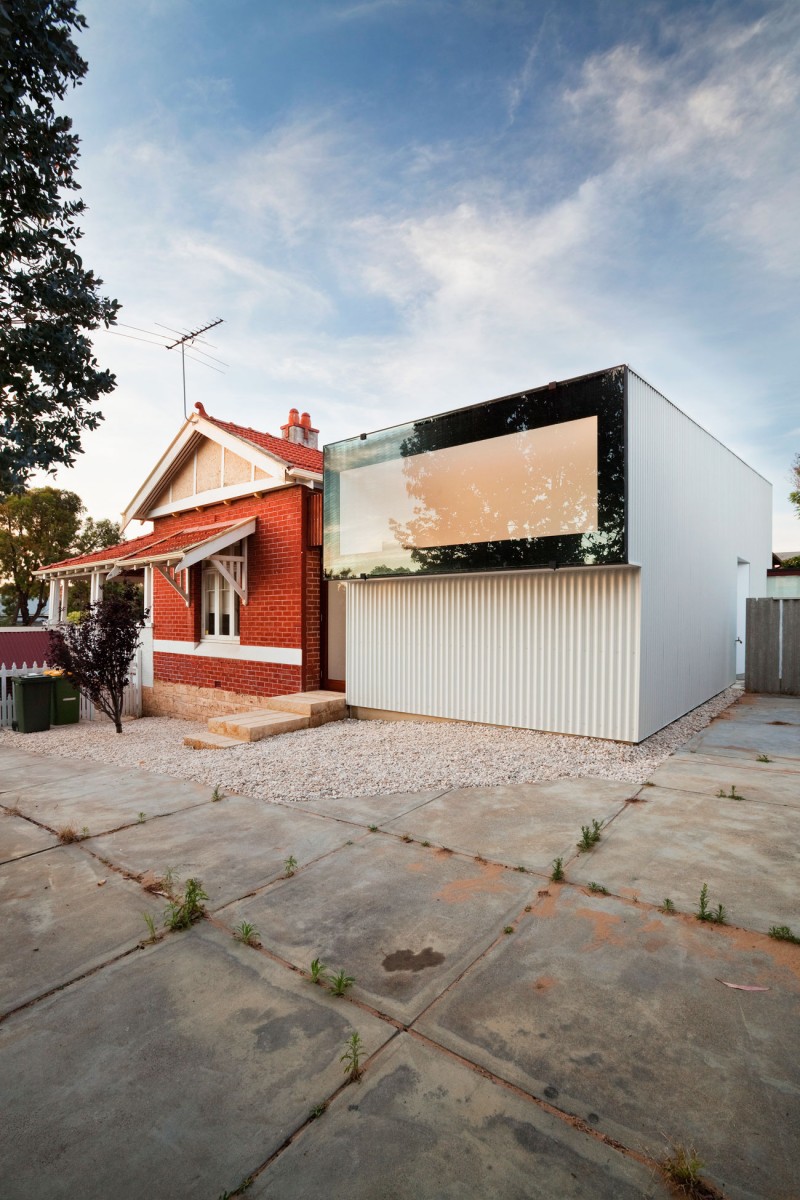 “A 65 square metre alterations and addition to the rear of an existing Federation brick and tile house which aims to extend the perceptual space of the project. Daylight is funneled deep from the north, morning light reflected in from the east, filtered zenithal light washed down from above and ambient light scooped inwards from the south.

These same apertures capture visual moments from both the adjacent and surrounding site through a large northern glazed and screen sliding wall, a considered eastern slither and a southern clerestory window projected beyond the buildings edge.

The project is located near the Swan River in the southern suburb of Bicton. It is a small alterations and additions, that replaced a derelict, lean-to at the rear of an existing Federation brick and tile house.

In the east by an attached neighboring dwelling with an irregular eastern boundary, a 6m high boundary parapet wall to the north and shared access right of way to the south. The project therefore sought to extend perceptual space through the considered placement of apertures capturing visual moments far beyond the prescribed site boundary.

The external and internal form of the new work was manipulated to sculpt atmospheric and functional light into crafted spaces, thus turning the originally introverted residence inside-out.

One enters, through a small light filled aperture located at the end of the generously volumed hallway of the existing residence.

The character and memory of the existing cottage are maintained as the primary streetscape. Only subtle hints of the new addition are revealed between interstitial spaces when viewed from the streets edge.

From the link space, day to day living spills onto the outdoor decks & steps. Therefore neighbourly interaction is encouraged in side yards not concealed in private backyards. The new built form has strong connections to the existing site and house, whereby the surrounding context directly influences the ‘form’ of the building and the position & sizes of the resulting apertures.

The neighbouring parapet wall to the northern boundary required an elevated light scoop to provide for winter sun. The fire rated boundary wall construction to the east, encouraged zenithal light to filter into the laundry space whilst a large clearstory southern window in bathroom provides privacy from the adjacent neighbouring properties.

The originally narrow termite ridden lean-to, with its poorly located toilet and adjacent disused dining space, was demolished and replaced with a isolated laundry, bathroom and a functional dining / kitchen space which has became heart of the house.

The considered placement of program not only provides strong spatial connections between the old and new but also activates previously under utilised spaces both inside and beyond.

The architecture of the project is not found in quantitative square metre assessments but in the experiential qualities, which pervade each space.

A new link set perpendicular to the existing hall binds new spaces to the existing residences and intertwines adjoining programmatic functions. This circulation space is economically set within the dimensions of adjoining areas whilst a clear counterpoint between old and new is maintained via a low ceiling and the subsequent compression of overhead volume.

The bathroom and laundry are masked physically and visually through operable door panels. However there still remains the attempt to provide delightful, naturally Lit sculpted spaces within.

The detailing of a simple external form, clad in a low cost corrugated skin, provided the opportunity for a greater emphasis to be placed on the materiality and manipulation of interior experience.

The small project works within 65sqm of contained built footprint but ultimately activates 150sqm of previously unused surface. Not only were new outlooks provided beyond the definable limits of the project but the design also allows a new and immediate experience of place – previously not offered by the old home.

Through the considered crafting of natural light all spaces remain well lit throughout the day without the requirement for artificial lighting. When night prevails, all light fittings are low energy LED.

A large sliding screen to the north, covered with stretched sail-shade fabric is operated to regulate sunlight & ventilation as well as provide privacy and a surface for movie projections.

Sustainability was sought not through complex technical solutions but through the original decision to retain the majority of the original family home.

The scheme proposed a reworking of the existing 2×1 into a 3×2 configuration, rather than a tabula rasa approach. During the course of construction 70% of waste materials were recycled through a waste management company.

The selection of a light coloured roof and wall cladding aimed to minimise solar absorption. This was initially a variation to council regulations due to it being deemed a highly reflective material.

With this project as a contributing precedent the council are now undertaking the process of amending their town-planning scheme to allow for the use of these efficient building skins.

The clients provided a clear direction for their aspirations of both physical and visual engagement within the building, whilst the builder’s openness to refinement aided the precise rafting of such experiences.

We therefore see the project team as consisting of the client, architect and builder intertwining knowledge in the collective pursuit of an architectural resolution.”