Duplex in Arnedo by n232 Arquitectura

Located in Arnedo, La Rioja, Spain, this duplex was designed by n232 Arquitectura.

Completed in 2013, the interior has a design that is clean and stylish, with vivid colors that aren’t in the least overwhelming, and instead populate the space comfortably and pleasantly. 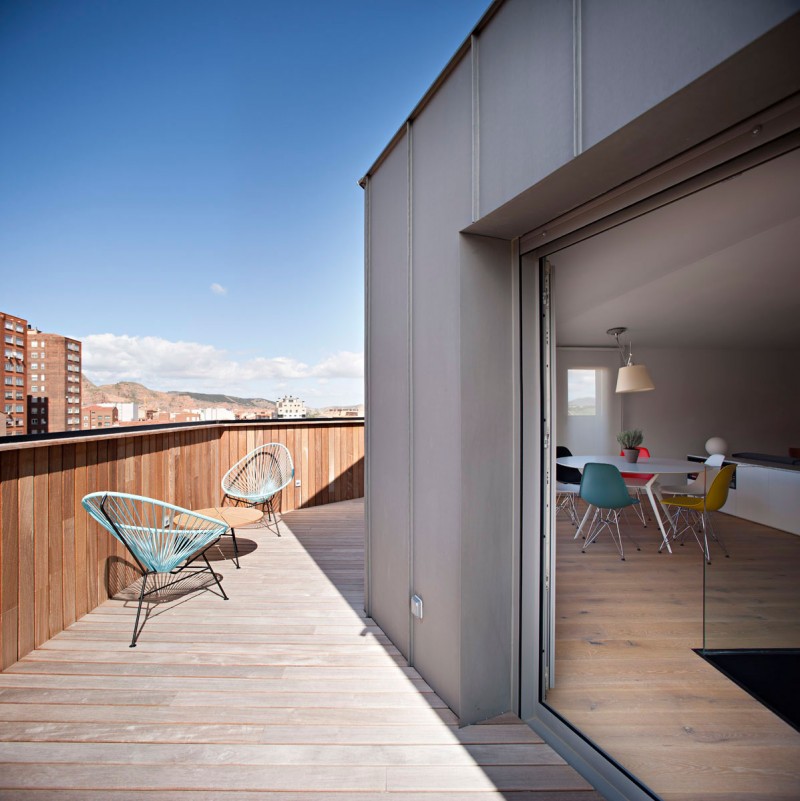 Duplex in Arnedo by n232 Arquitectura:

“This duplex penthouse is inside a new building located in Arnedo, Spain. The original plan of the dwelling did not comply with the client expectations and the lifestyle of a young couple. After an intensive research and several meetings, the resolution of the architectural challenge was well enough reached.

The spatial solution is not conventional, due to the flip of the floor use found in a traditional duplex. The main access and social area are in the upper level, while the bedrooms and more private zone are in the lower one. Turning upside down the levels not only modifies the use of them, but also changes completely the configuration of the space of each one.

The main access level is where the social life expands. This space adapts seamlessly providing an open concept living room and unifying it with a large wooden deck terrace. A number of elements in this floor are used to give character, while they organize space through its functions: the stairwell divides the kitchen from the living and dining area; a column covered with mirrors gives back polyhedral vision of the place; and finally the black background cupboard that provides different use depending of the space -library, multimedia shelves, wardrobe, electrical cabinet, main door, toilet door, chalkboard-.

The lower floor, however, is more protected. A wooden box gives privacy and access to each bedroom and links the two floors with a common space. In this way, this box acts as a heart of the home, a transition zone from public to private, and giving warmth and allowing the transit among the rooms.

The master bedroom functions as a micro apartment, with its own access hall, a resting area, a dressing room, a place for sleeping and watching TV, a balcony and a bathroom generously sized. In contrast with the upper level, the lower one offers an intimate and secluded mood.

Thus, the architectural solution offers its inhabitants a set of contrasts, and in its core, a wooden heart that ties everything together.”

A Duplex in Greenwich Village

i! arquitectura Designs a Contemporary Home with Stunning Views Over Madrid

A Penthouse Duplex on Gramercy Park