The exterior is done in rich wood and the exterior in a bright white, creating a contrast that is very pleasant to the eye. 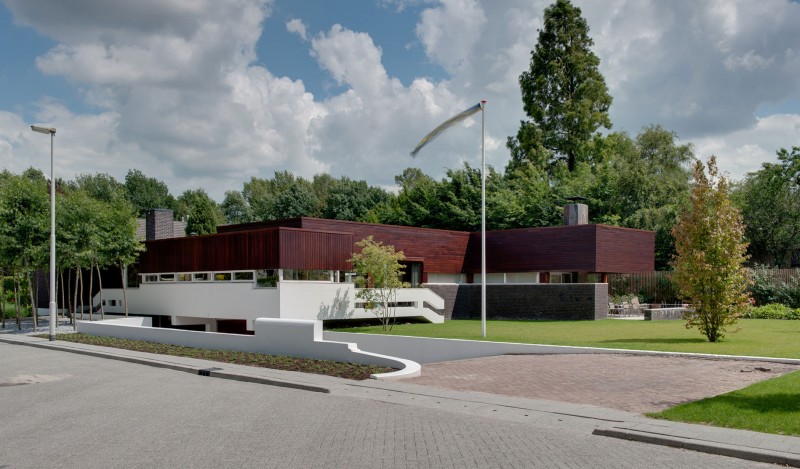 “The Van Buchem House is originally designed by Jaap Bakema in 1962. Today it is a municipal monument. The villa is built in a U-shape with the south side left open. On the street side the facades have a closed character whereas the backside of the building has a more open and green character. Because of the minimal amount of doors, the internal structure is very open.

In 2007, the current owners of the villa asked for the addition of extra space as in the original design was not enough room for the needs of the young family. Their desire was to create a library to store the families book collection. At the same time, this room should also be used as a study or guestroom. In order to create the extra space, it was chosen to solve the expansion underground at the location of the patio. By doing this, the original volume and composition of the building will remain intact. Next to the library, also an additional bathroom and games room is created. The spaces below ground level will bathe in the sunlight from above by the multiple glass rooflights which are carefully integrated in the garden design as well.

The floor inside the patio is newly set up and features the same stone as was used in the original design for the floor of the living room and outdoor terraces. This enhances the effect that the interior gradually fades into the garden. The stones are imported from an Italian quarry.

The house itself has been renovated and restored by its original principles. The brick walls have been cleaned and all the woodwork outside is repainted. Also some window frames have been renewed. The damaged floor in the living room is removed and replaced by a newly laid floor which also contains a new heating system. Finally all walls inside are plastered again and all the facilities of the house have been updated, including a new underground thermal storage system.”

The W.I.N.D. House by UNStudio