Split House was created by TWS & Partners, and it is located in West Jakarta, Indonesia.

The interior blends the boundaries between workspace and the residential, and even uses some ingenious methods of storage and concealment to add to the illusion. 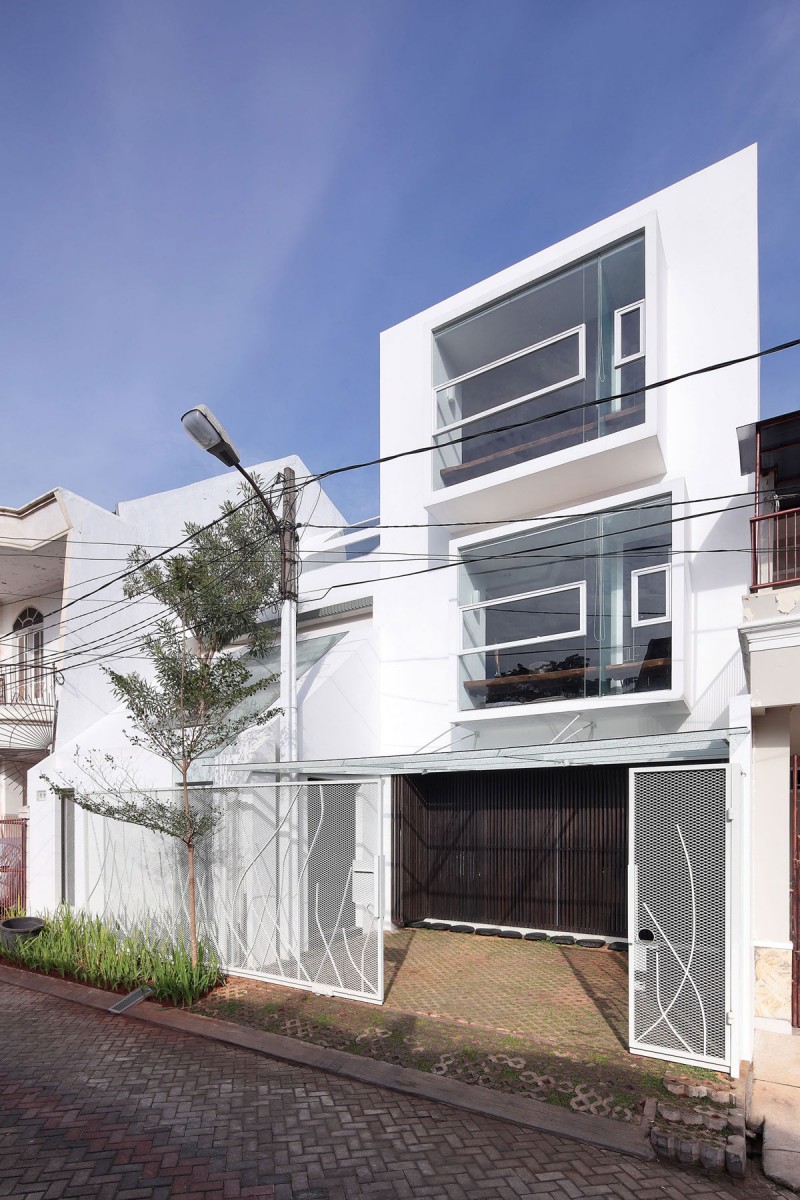 “This project is a renovation project of an existing house on 6×15 meters (20×50 feet) land owned by a family of four. Pushed by the need to provide a comfortable and adequate working space, the owner planned to extend the land area one lot to its neighbor. This need creates a combination function between a private living space and working space together in one place, which is no more an ideal form. We need to design a well separation for those functions. One other constrain is the construction phases should had been run one by one, because the family requested not to move out from the existing house during the construction of extended land lot. After the new building finished, they moved aside to occupy it, so the existing building construction could run.

According to the background of expanding design and construction area, it was decided to design a house consisted of two buildings. It is a strategy to run the construction phases one by one and to separate the two functions between private living space and working space.

The name of “Split House”, related to the concept visualizes two houses with slope roof that stand on two different land lots. One of them is rotated 180 degrees, so they are opposing each other. The part that has slope going down to the front street is an entrance area to the private living space for the four-family, while the other part of the house is the entrance for office space. Actually the zone separation of living and working space does not happen horizontally, but vertically. The horizontal separation in the front area of the house is just intended to define the entrance to living space and the entrance to the office. Generally speaking, the zone is divided vertically, that the ground level is intended for office function and the upper level is used for living space. Those vertically zone division is very logical to reach private visual quality as living space hierarchy in higher floor.

Living space entrance starts by a front courtyard with a tree as a welcoming vocal point and is covered by a transparent roof to let the natural light and air coming directly into it. This courtyard concept in the front area of the building acts also as mediation to family room on the second floor with the surrounding outdoor area. After passing the courtyard, we will arrive in the gallery space like directing us to vertical circulation area at the back. Vertical circulation is made in zigzag shape, imagining it as an artwork element filling the void area at the back. The gallery space actually could also be used as additional space for working area of the office if it is needed.

The placement of family room at the second floor is intended to achieve privacy as in function and also visual protection from outdoor area. Meanwhile we still preserve the connectivity of views and natural air circulation between the family room itself with the outdoor area within the foreground of a tree from the courtyard.

Master bedroom and kid’s bedroom are located at the side of family room. These layout suits the best as a balance circulation to all residences of the house. Family room becomes a loft under the slope ceiling and roof that eventually direct the natural light and air to come in. This loft concept space for the family room also let the visual continuity to the front courtyard. On the third floor is set up with casual lounge space for the family with the roof garden that produces an active natural air circulation changing with the front courtyard.”

Modern Construction with Fabulous Views Over the Bay of Acapulco