The Exbury Egg by SPUD Group and PAD Studio

The Exbury Egg is a project completed by SPUD Group and PAD Studio and it is located in Exbury, a village in Hampshire, England.

Its curious design makes it look like something out of a fairy tale, and it is design to make as small an impact on the environment as possible. 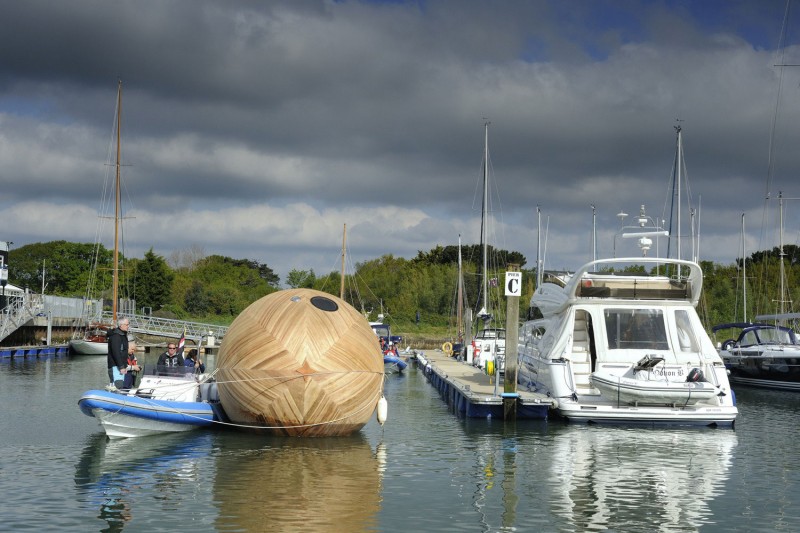 The Exbury Egg by SPUD Group and PAD Studio:

“The project is led by art, architecture and education consultants, Space Placemaking and Urban Design (SPUD Group). SPUD project manager, Phil Smith explains: “Everything about this project looks to the value of our environment and sustainability; from the design and build of the Egg, to working with Stephen Turner in raising awareness of environmental change, to creating a cross curriculum education programme for schools and colleges.”

Created and designed by PAD studio and Stephen Turner, the Egg was inspired by the nesting seabirds on the shore. It was built locally, by boat-builder Paul Baker, as a cold moulded reclaimed cedar -sheathed structure approximately 6 metres (19.7 ft) long and 2.8 metres (9.2 ft) in diameter, whose aging will be tracked by the artist. Local Douglas Fir has been used for the supporting ribs and internal framing; continuing the age-old tradition of timber marine construction on the Beaulieu River.

Wendy Perring, the project architect, explains: ‘It was our intent to create a minimal impact live/work structure, using materials with low embodied energy sourced within a twenty mile radius, and put together by a team of local craftsmen using centuries old techniques. We want to test the minimum someone needs to live quite comfortably, and how we can minimise the impact on the environment.”

Inspired by the estuary and its ecology, Stephen Turner will develop the Egg into one of his artworks through the course of the residency; an on-going record of his work will be available for the public to see at Exbury Gardens and on the project website. At the end of the project, the Egg will become part of a sculptural installation of the artist’s work and shown in galleries across the country.

Stephen explains his plans: “My contribution to the design concept of the structure was its symbolic egg form, that will decay and change during my occupation; turning the egg into a calendar revealing the impact of 365 days of changing weather and tides upon its surface. My idea is to show that nothing is forever and that understanding and welcoming such change should be part of our sustainable relationship with the rest of nature.
“I wanted to investigate the landscape at a key moment when climate change is already creating new shorelines and habitats. Established salt marsh is being eroded by a combination of rising sea levels and falling landmass and the entire littoral environment is in a state of flux. The implications for wildlife and flora as well as people are challenging and raise awareness of a particularly 21st century sort of tension.”

The educational aspect of the project is hugely important; schools and colleges have been able to visit the boatyard to learn about, and watch, the construction. Once afloat, Stephen Turner will be liaising with SPUD to engage with a wide local community and will use interactive social media to report on the stages of his voyage of discovery.

The interior provides for Stephen’s basic needs with a desk area, hammock and kitchen – containing paraffin stove and sink (there is no running water to the Egg – Stephen has to collect and transport water to the Egg from a nearby hosepipe provided by the estate owner). the Egg is off-grid and has no mains water, grains or power. All Stephen’s power requirements are provided by a series of solar panels in a nearby field. These provide enough power to charge a phone, use his laptop and give some LED lighting.

There are two full height cupboards that act as wet and dry lockers for Stephens clothing and belongings. The wet lock drains into the Eggs bilges which will be periodically pumped out by Stephen. In between the cupboards is a wet/shower room – this contains a basic solar shower (essentially a bag of water which Stephen heats outside with the sun), and a portaloo (like you would find on a boat or caravan) – Stephen will need to regularly empty this toilet by taking it up to the farm and putting the contents into the sewerage. tank. The wet room is very basic with a waterproof coating on the walls and a shower tray.

The stove is a Taylor’s Paraffin Stove – this requires the tank being pumped up to achieve pressure to drive the burners. Its a typical marine stove and used for safety (as opposed to pressurised gas stoves).

Finally the Egg has a small charcoal burning stove inside that will provide Stephen with heating through the colder winter months.”