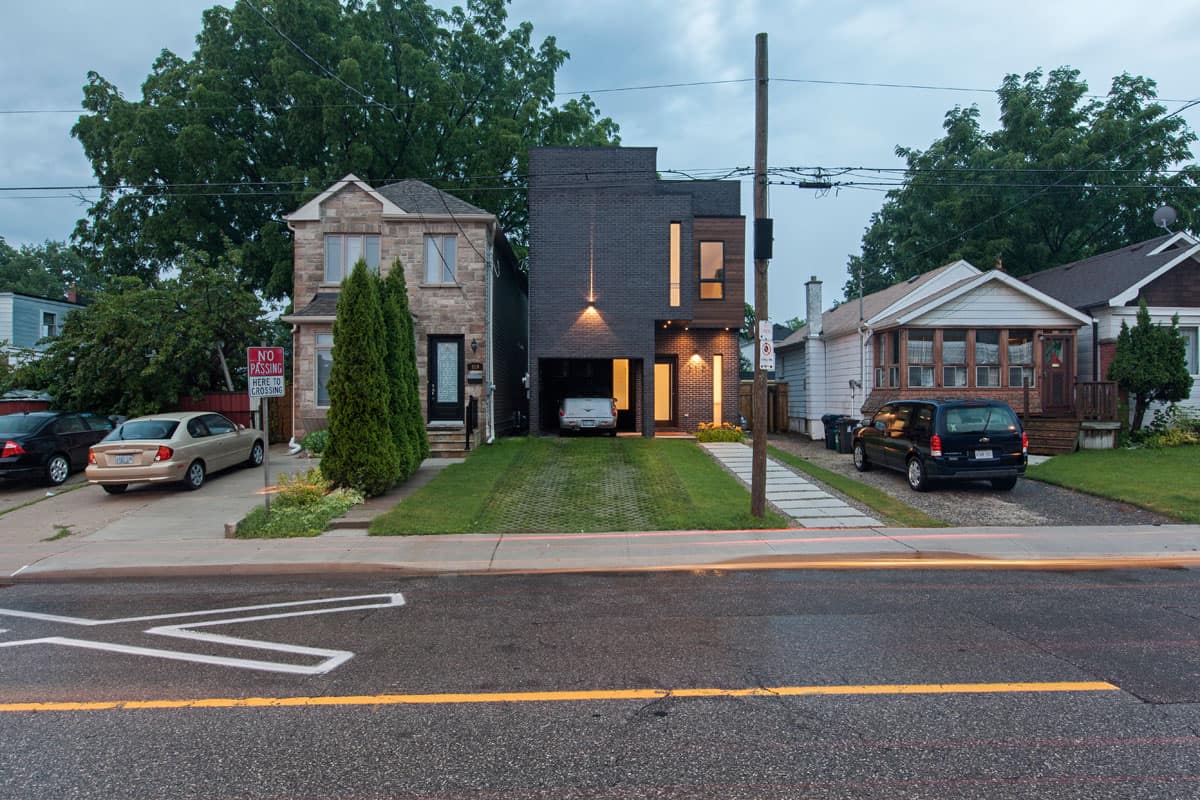 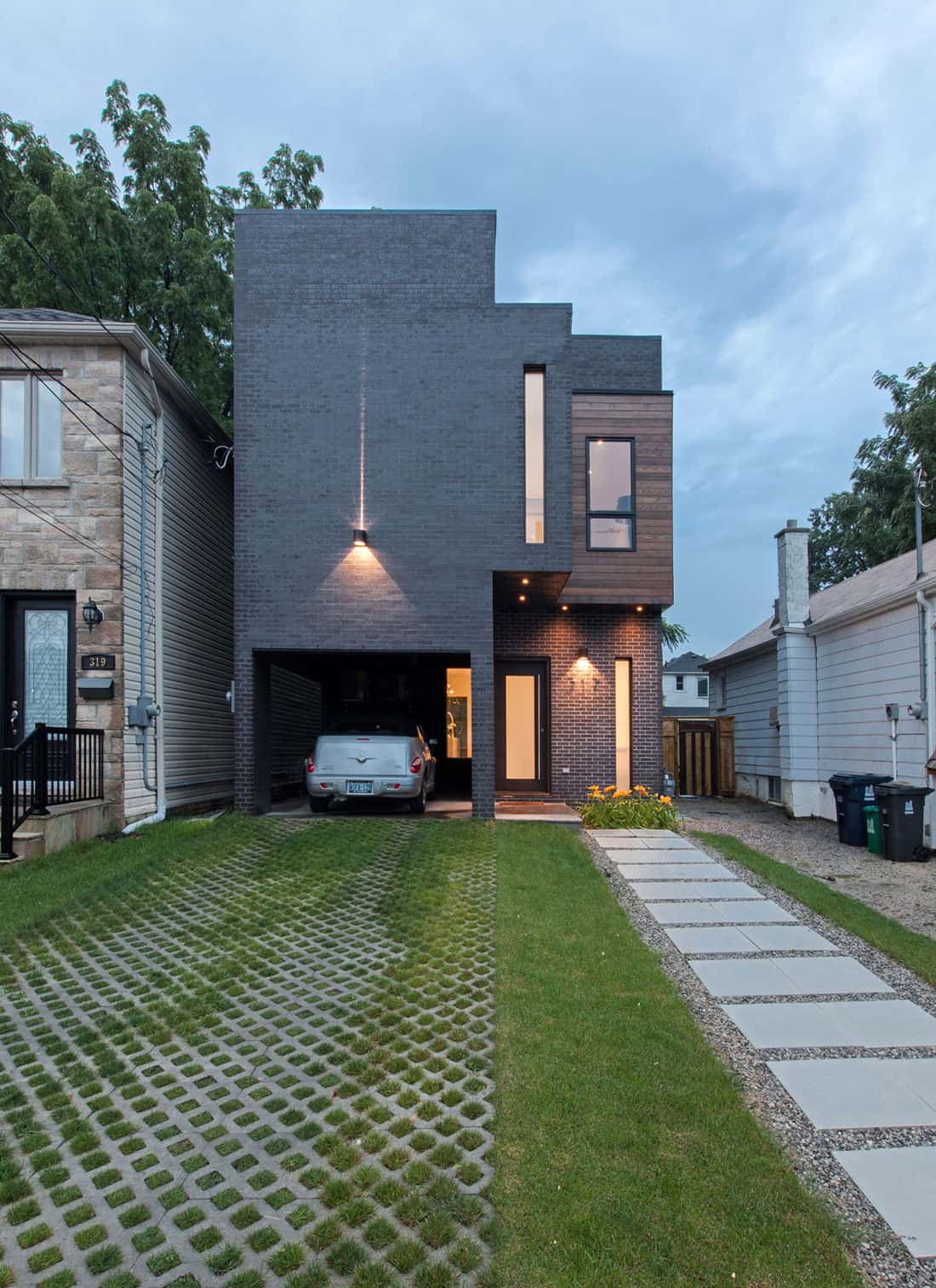 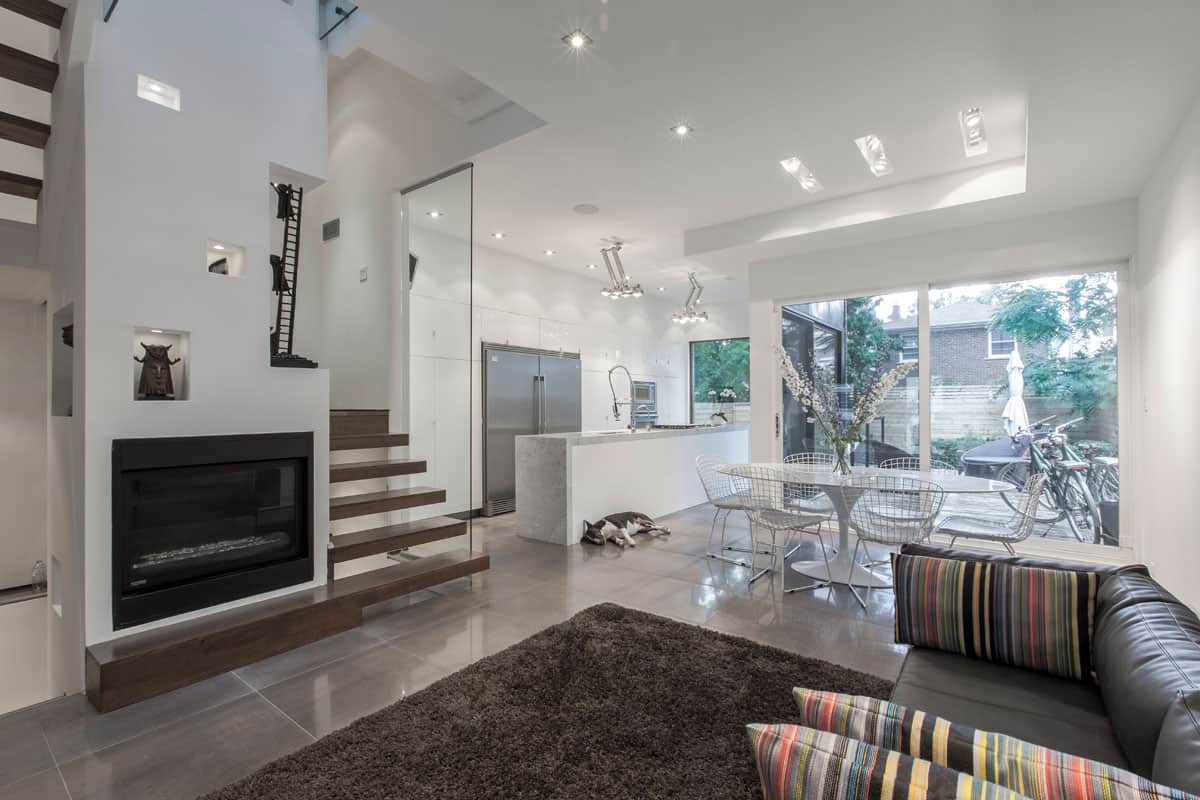 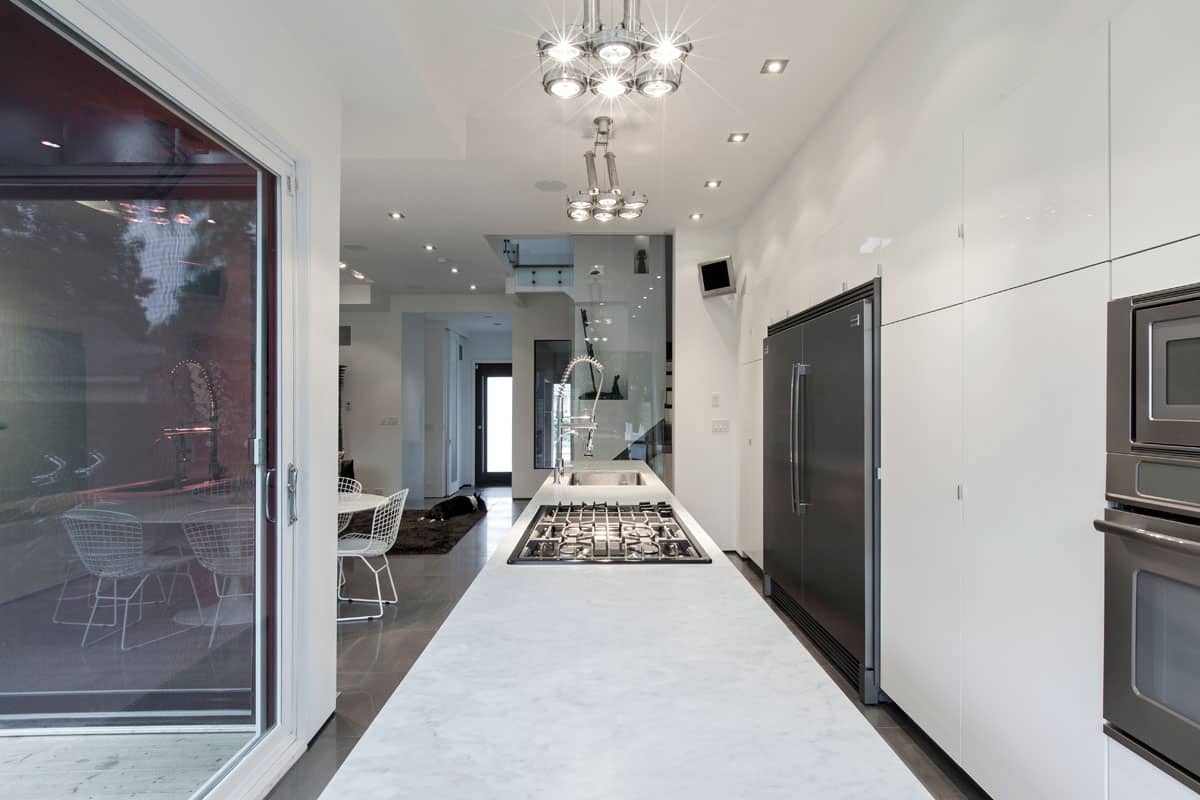 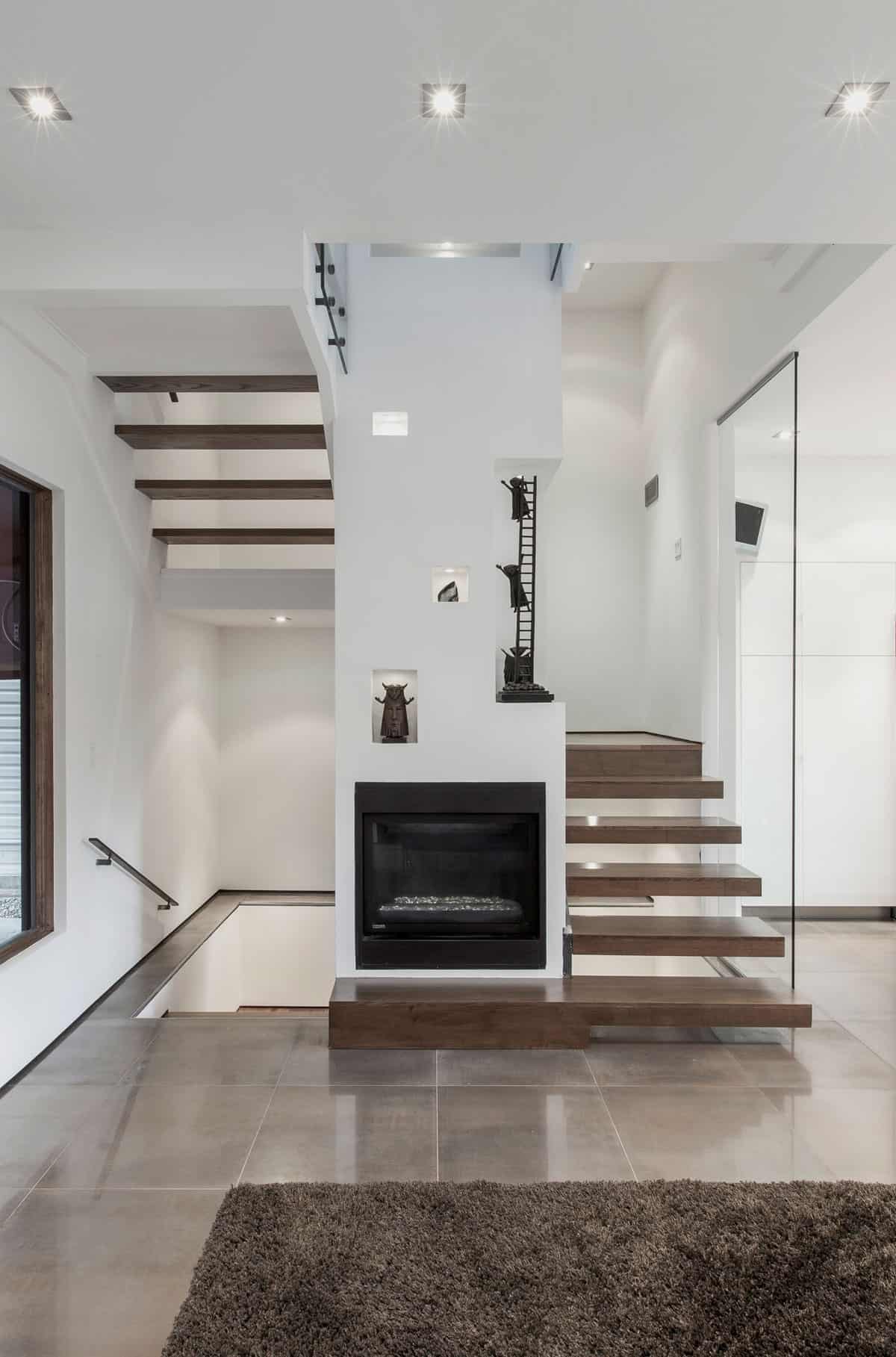 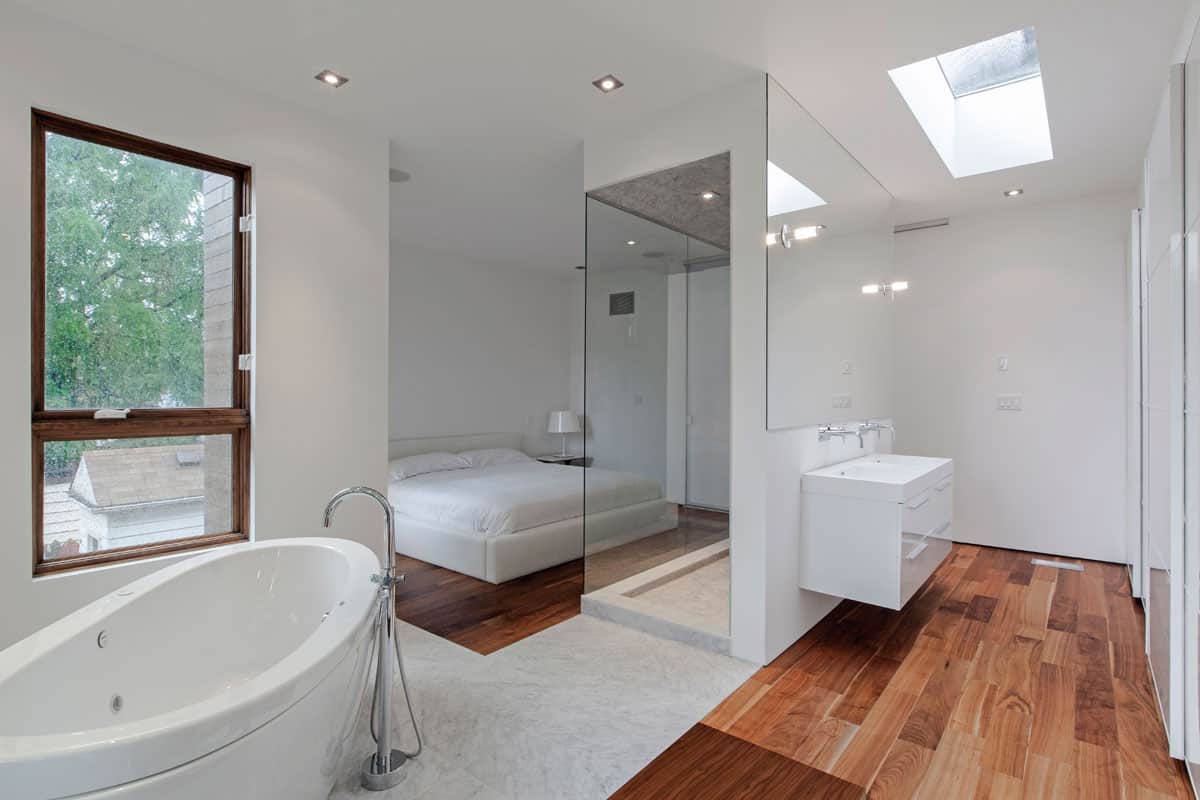 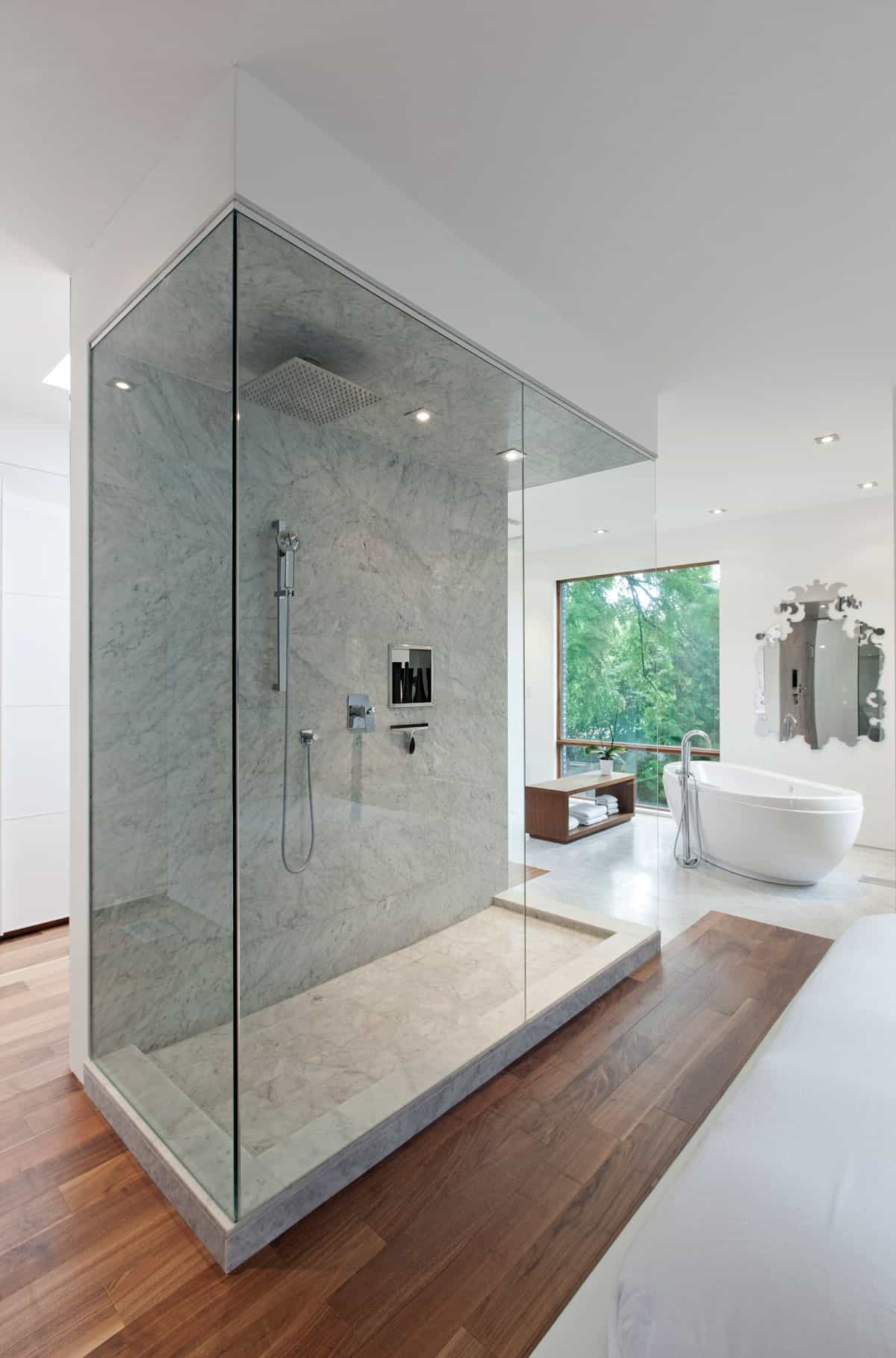 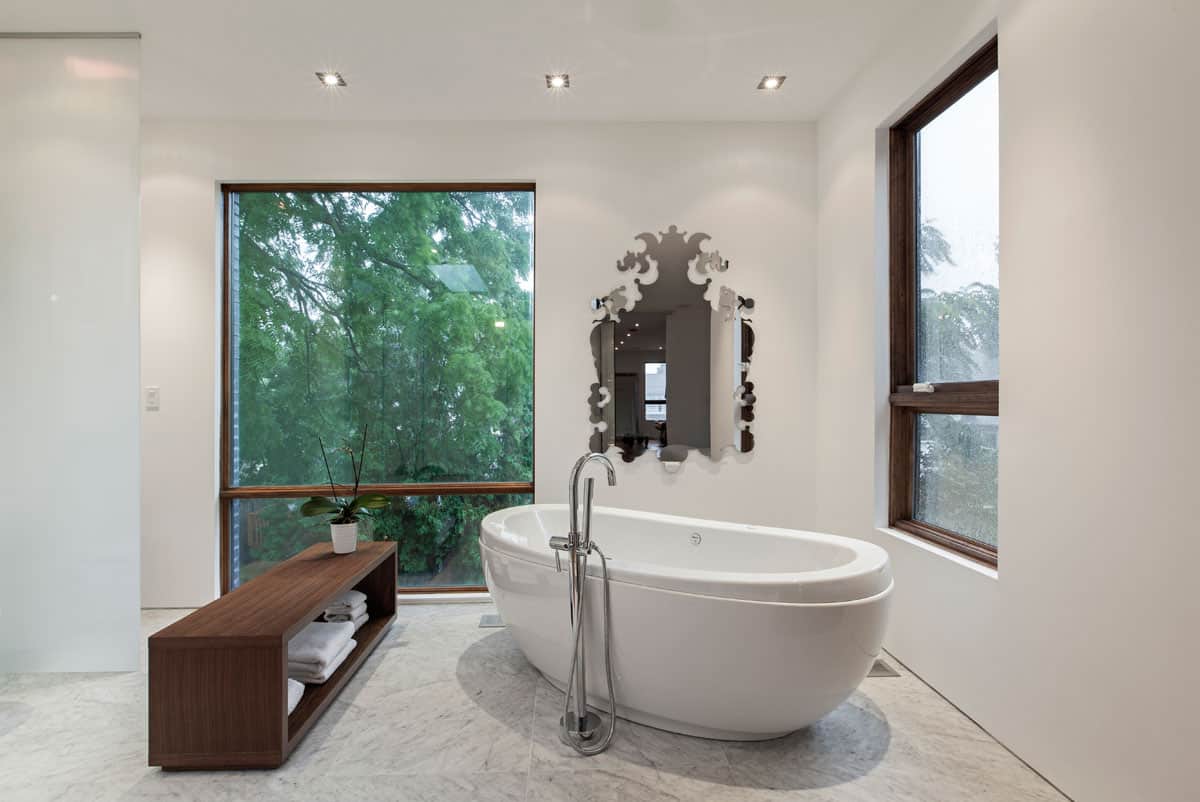 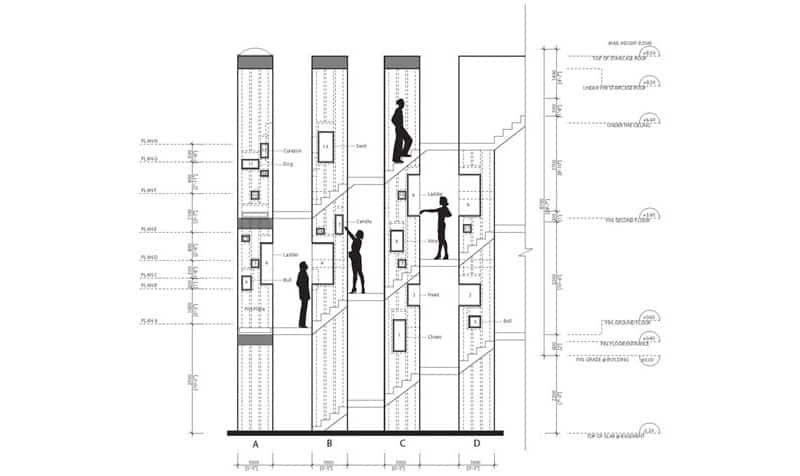 Totem House is located in Toronto, Canada, and was designed by rzlbd.

The home’s exterior architecture differs greatly from those which surround it, making it stand out from its counterparts. 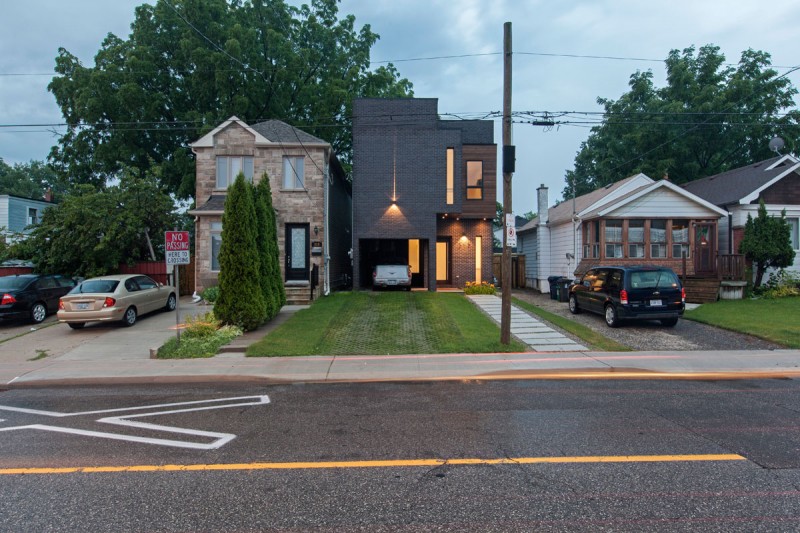 “Robert and John are travellers. They collect sculptures by local artists and bring them home. They have a keen eye for modernism and minimal design and they don’t settle for ordinary. They love cooking and they avoid the unnecessary. In building their home, rzlbd respects their curiosity for style.

A totem is sculptures within a sculpture. The totem in Totem House is a vertical gallery that exhibits John and Robert’s souvenirs from around the world. Each piece has been carefully measured and placed in a designated niche inside the Tower. An open wooden staircase connecting the three stories of the house gently circulates around the totem allowing one to observe the artworks from many different angles. During the day the skylight above the staircase naturally illuminates the totem, and at nighttime dedicated LED lights installed inside the niches light each piece. The totem naturally becomes the focal point in the house, as it is visible from every corner on all levels.

The evolution of design was a simple geometrical obsession with squares and grids. Starting with ten 10’ x 10’ squares carefully assembled on the linear site, logical modules were then dedicated to essential rooms in the house. The squares not only define the interior rooms, but they also formulate the boundaries of the backyard patio, the landscape, the parking area and the covered entry to the house. The totem sits on the central square dividing the living/dining area from the kitchen on the ground floor and the two bedrooms on the second floor.

Robert and John’s kitchen could not be a typical urban kitchen, because they don’t have typical cooking habits. They passionately care for taste and they are minimal and chic. A gas burner cook-top with no hood on top was what they wanted to cook their food on. Except for the appliances everything is concealed behind the white cabinet doors that cover the wall from floor to ceiling.

On the second floor the master bedroom is yet another manifesto of their style, with the ensuite and the bedroom entirely merged together and washed with natural light, the challenge was to define the wet zones without disturbing them with dry-walls. Beautiful marble tiles separate the shower and the bathtub area from the rest of the hardwood floor. The freestanding bathtub installed in the corner of the room has a peaceful corner view to the courtyard.

The exterior of the house is a monolithic charcoal brick mass. Two small blocks on the north and south facade of this perfect mass have been extracted and cladded with wood. The small wooden corner creates an interesting deception where one imagines the wood to be the core material of the brick mass, like a bitten apple exposing the color of its flesh. The harmonious contrast of the charcoal brick and the wood with the immediate neighbors is tied to the surroundings with a humble design for the landscape allowing the neighbors to perfectly frame the house.”