This home was originally built in 1983 with the primary goal of being eco-friendly. It was remodelled in 2011 with a contemporary design and the latest environmental technologies. 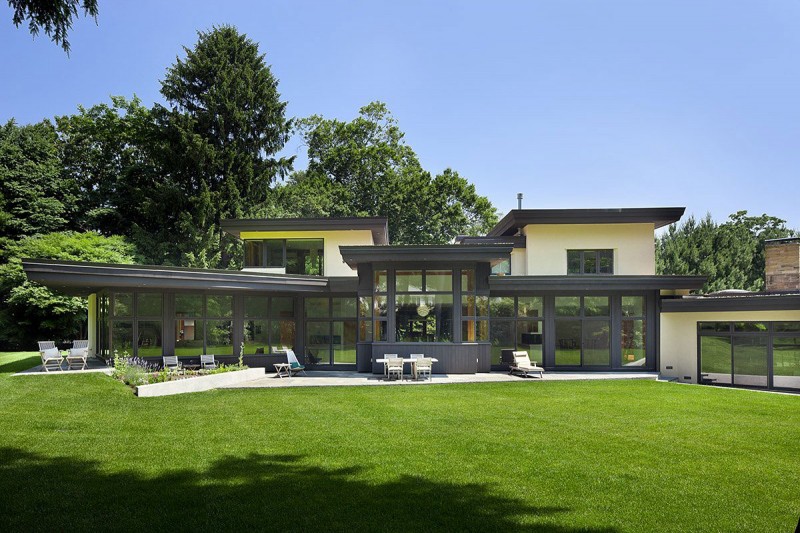 “The existing Chestnut Hill residence was built in 1983 as a “Solar House” with a few large windows on the south side and deep set openings in thick exterior insulation over concrete block. The resulting interior spaces were dark and cold.

Sited on land that was originally part of an estate landscaped by F.L. Olmstead Associates in 1909, the house was purchased in 1996 by Mitch Kapor, founder of Lotus Development, who made several minor alterations managed by Mark Armstrong and Anne Snelling-Lee, architects at Leers Weinzapfel Associates at the time.

Because of their previous experience with the quirky house, the most recent owners were referred to Snelling-Lee and Armstrong, who, as a+sl studios, continued to collaborate on complex residential and commercial projects after leaving LWA. The owners’ growing family and passion for green design mandated a complete reappraisal of the interior spaces and their connection to the site, as well as technological upgrades to reinforce the house’s original mission and to make an up-to-date sustainability statement.

The interior spaces have been opened up and ceilings heightened. A new master bedroom suite and family room additions provide needed spaces for the couple and their young children. A new passage along the south side connecting the living, dining, kitchen, and family rooms has been created with a wall of high performance windows to expose the pastoral site with the interior and to flood the rooms with natural light. NFC Certified veneers and hardwoods applied to cabinetry, floors, walls, and built-ins lend warmth and a sense of natural materials to the new home.

The resulting scheme leverages the original house’s overhanging eaves to provide passive energy conservation: using a detailed digital model, the overhang dimensions at various locations were clculated to allow penetration of warming sunlight during the winter, when the sun angle is low, and to provide shade in the summer, when the angle is high. A geothermal well assists heating and air conditioning by pumping heat in and out of the ground as needed. Power saving systems oversee lighting, power, appliances, and networked media. A green roof tempers heating and cooling demands while keeping storm runoff on site.

While respecting the geometry and energy conserving intent of the original structure, a cool contemporary addition takes this family’s home off the grid.”

Hammer Architects Carry Out a Modern Renovation in Brookline

A William Stephenson House for Sale in Beverly Hills