House in Valongo is a private residence located in Valongo, Portugal.

It was designed by Atelier Nuno Lacerda Lopes, and has wide open spaces with abundant natural light. 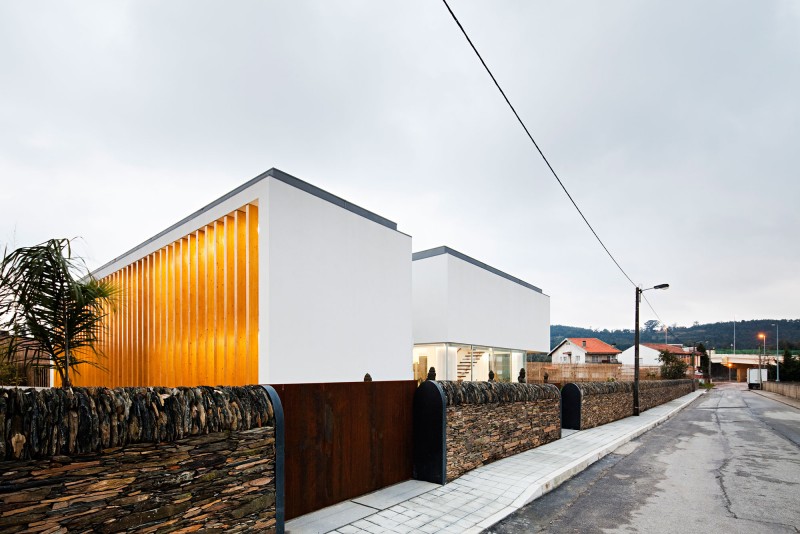 “Thought as a large volume that cuts and breaks the house proposing spaces, scales, experiences and distinctive moments. The entrance sharply assumed by a breach or opening between volumes, gives us, a compression accentuated by a sculpture that accompanies the entrance path. The house closes itself on contact with the street and opens itself to the interior of the land through the large windows, provoking unbalances and sensations.

A rigorous metric served as a base for the design and volumetric concept of the house. The program was distributed in accordance with functional demands, adjusting according to necessities and project evolutions, guaranteeing through lighting, natural ventilation and circulation studies, a succession of interior spaces that are differentiated and adapted to the different uses, moments, experiences and sensations.

The compartments were thought and treated through different heights, levels and window and light openings, resulting in a great diversity of volumes that are lived and related in distinctive manners. On the other hand, there was a special concern with the dilution of the interior / exterior limit, where the living rooms, the kitchen and the gym / spa see their extension to the outside through large windows, making the most of the land and at the same time guaranteeing the necessary privacy, to be done through a landscape design.

Guaranteeing the unity and continuity of the whole house was a predominant factor in the choice of materials to be use. The game of shadows in the façades, resulting from the volumetric advancing and retrieving, assures a greater plastic richness in the design of the façades. A vertical wooden structure assures the necessary shading, attributing a rhythm to all of the East façade, insuring the interior privacy.

Thus, the solution results in a strong intervention, outstanding in regards to the conjugation of the materials, with a sober language that balances the necessary aspects of modernity at a beginning of a century and the security of a formal and aesthetic classical expression assurance of time’s continuous updates, in a space where one desires to be happy.”

Note: this project was originally published on June 20, 2011. This article features Hi-Res shots.

House in Comporta by RRJ Arquitectos

One Comment to House in Valongo by Atelier Nuno Lacerda Lopes