It is located in Hyoja-dong, Jongno-gu, Seoul, South Korea, and was finished in 2013. 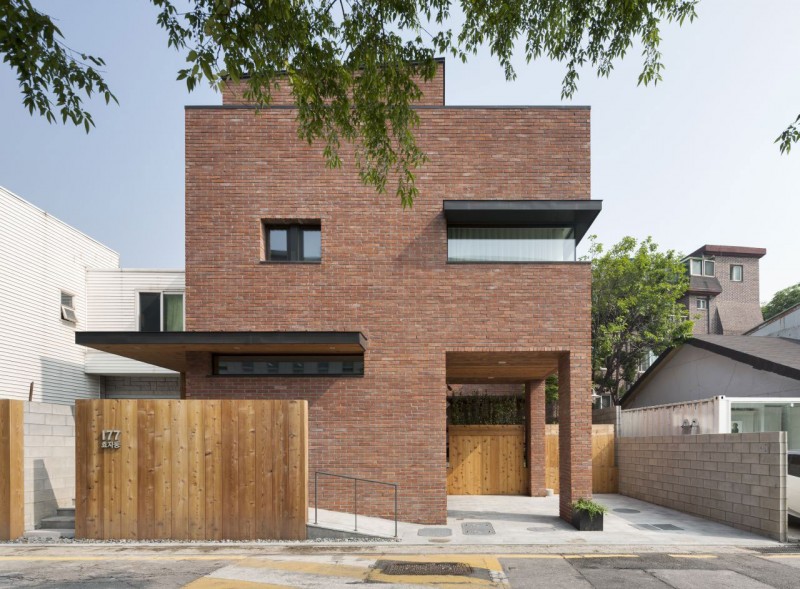 “This 3-story private residence is located in the old neighborhood of Hyojadong, directly west of Kyongbok Palace in the heart of Seoul.

Although the site totals only 194 square meters (2088 square feet), it was important for the client to preserve area for natural landscaping. The house encloses an intimately scaled exterior courtyard that opens to the southeast on the ground floor for maximum daylight to enter into the site. The resulting U-shaped mass, along with varying floor plates at each level, helps break down the scale of the building to better integrate it within the diverse residential neighborhood.

On the ground floor,the open flow of living, dining and kitchen areas face out onto the central courtyard through large, sliding glass partitions, allowing in daylight and connecting interior and exterior spaces. Similarly on the second floor, living spaces are arranged around the central courtyard. Guest bedroom, family room, and master bedroom have windows facing the interior of the site with views of the courtyard. Although the building engages with the street, doing away with the traditional privacy wall, windows are sparingly used at the front facade. The house truly “opens” to the central courtyard in order to provide privacy for its inhabitants.

The third floor consists of a single studio space with access to two separate roof terraces. The front terrace provides views of Kyongbok Palace to the east and of city center high-rises to the south. The back terrace opens out to dramatic views of nearby mountains to the north.

The salvaged brick facing on the exterior helps blend the house into the fabric of small buildings in the neighborhood. The repeated pattern of individual and unique, salvaged brick units reflects the numerous surrounding brick structures as well as the stonewall patterns of the Kyongbok Palace nearby. In addition, the play of recessed and protruding windows breaks up the monolithic image of the brick exterior.

The interior expresses a minimalist palette of finishes that include natural oak flooring, ash veneer, plywood, and paint.”

Beachaus I by Pb Elemental