Itahye Residence is located in Santana do Parnaíba, São Paulo, Brazil, and was created jointly by Apiacás Arquitetos and Brito Antunes Arquitetura.

The spacious home makes use of a great deal of openings to blend the boundaries between indoors and outdoors. 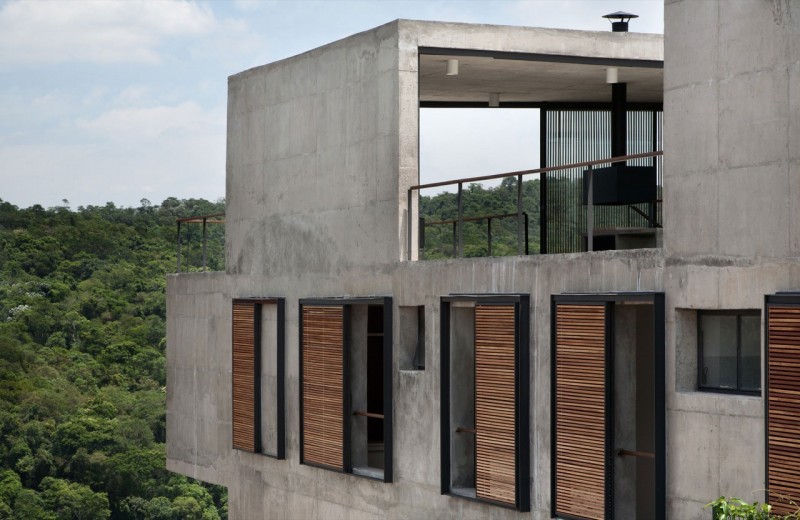 “Designed to be located in a suburb in the city of Santana do Parnaíba, in the state of São Paulo, the development of the project for this home was possible thanks to the collaboration of the client, who in an unusual way in these situations, considered positive the hypothesis of living in a house designed in a way to establish a clearer relationship to the street.

The first prism, parallel to the street and in contact with the ground, contains the leisure area, sauna, jacuzzi and lounge, in addition to the entire infrastructure of the house (tanks, pumps and filters). The pool covers these areas.

The second prism, perpendicular to the street, contains all private and service areas; rooms, laundry, and TV room, which are at the same level as the garage. They are connected by a circulation around the courtyard, which in turn connects to the leisure area.

The roof slab determines the level of the living room and extends to the public promenade generating an internal street, and consequently another elevated courtyard with a direct view of the landscape .

Both prisms are enclosed by two parallel frames perpendicular to the street, which are the boundaries between internal and external areas. They are connected by an open passageway (the elevated courtyard) and another closed one (metal bridge), that link the following related programs: the first frame, closest to the access road, contains the kitchen and entrance courtyard, in the second frame are the living and dining rooms respectively.

The dining room is at half the level of the living room, and therefore serves as intermediate floor between the leisure, private, and kitchen areas.

The gap between the living room and the kitchen forms a suspended courtyard, facing the main view of the house: a large nature preserve that draws the landscape and turns out to be an important element guiding this project. The house was built in reinforced concrete and metallic frames, glass, and wood.”

Casa do Arquiteto by Jirau Arquitetura

House in Dnepropetrovsk by Yakusha Design