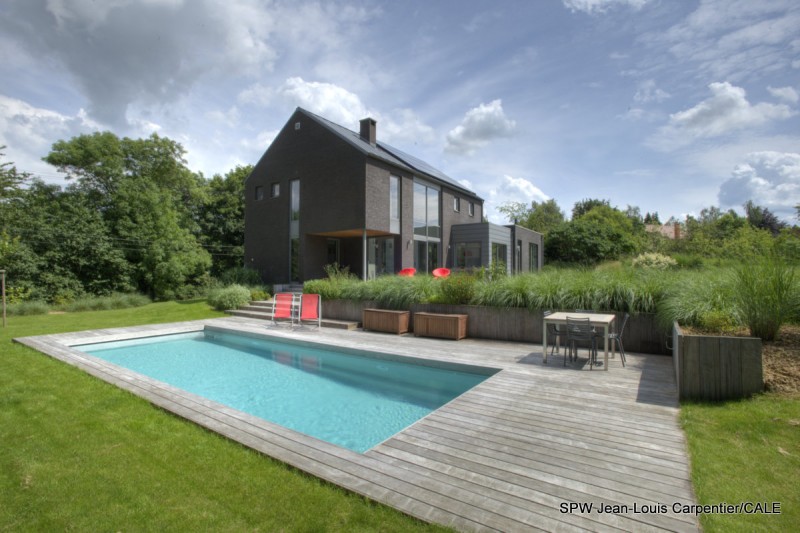 “THE PROJECT:
– New low energy single family home for 2 adults and 2 children.
– Surface : 2,368 square feet
– Energy Performance: K35 – Ew 56
– labeled CALE
The desire was to create a home where the quality, organization and functionality of the space maximised the well being of the inhabitants. Careful consideration was given to the comfort level of such a low energy home. It was also essential for the design to establish a permanent relationship with the outside environment.

METHOD :
Integration to the site was made firstly ​​by implementation of the building and its side access, which on the one hand, preserved the existing slope and on the other hand allowed the addition of volumes to the existing building on the right. The volume’s flat roof was also a contributing factor.
The choice of a dark brick in 2 tones (very dark brown for the brick and grey for the zinc, blue stone, window frames) allowed for the harmonious integration with the surrounding landscape. Urban planning constraints contributed to the overall aesthetics of the building. The impossibility for a flat roof on the main volume is why the zinc roof was built to slope.
Due to its low energy design, interior temperature remains constant thanks to double flow ventilation and is also what allowed the interconnection of the internal volumes. The living spaces, which serve as heat retainers, are separated from the mezzanine with a wall. Excess heat is able to diffuse upward through open space.
Interior areas and volumes of different heights also allow for more ventilation and an increased sense of space.
The home’s extension was built with equal consideration for the existing interior as well as the exterior site and landscape.

RESULT:
The goal was achieved, in that the architectural research and design enabled the proper inhabitation of harmonious and functional spaces of superior quality. Furthermore, the energy requirements were perfectly met and planning constraints were creatively adapted.”

The Architectural Bureau A2 Designs a Home in the Banks of a Lake in St. Petersburg

SUCRA Arquitetura + Design is a Private Residence Located in Caxias do Sul, Brazil

Drozdov & Partners Build a Private Home Out of Recycled Bricks

A Private Residence in Northumberland, England

One Comment to New Private House in Feluy by Bureau 2G