It was completed by Design band YOAP. 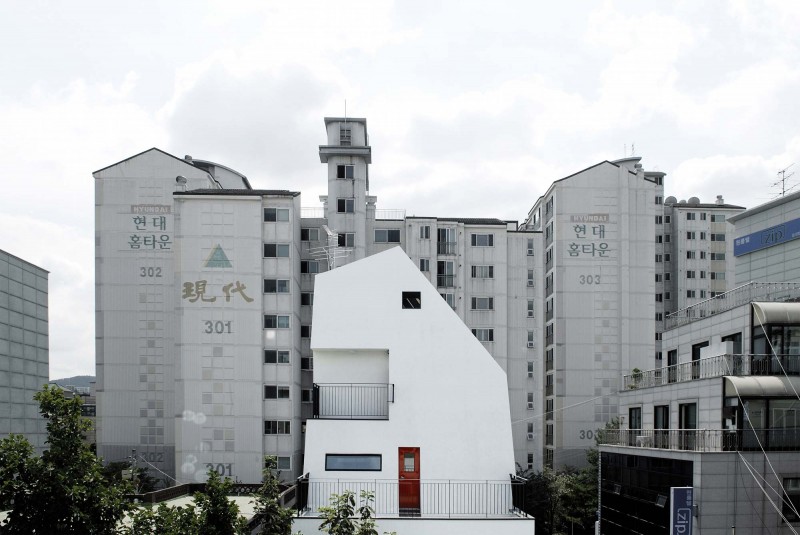 “The site Located is limited to a very small area, small even for a house: 8 meters (26 feet) wide and 20 meters (65 feet) long, with a 175 m2 (1,884 ft2) area. Nine studio apartments had to be packed into this 5 story multiplex housing building. As is the case for all rental housing in Korea, the building had to be profitable and economical and yet the building should be pleasant and even pleasing for the residents.

Each apartment was given the simplest floor plan possible, so that none of the nine apartment spaces would intrude into another in the limited area. This left the designers with some ‘leftover’ spaces in the plan, which then were turned into ‘breathing spaces’ such as the terrace and the community area on the rooftop.

Once people walk into their apartment through the red doors, large windows greet them with the views of small Seoul streets. The designers made maximum use of the location of the site, three sides of which faces the street, positioning windows to view the street, not the adjacent building, to create open view.

As a result, the pipelines and the aluminum grill windows of the equipment space came along to the west side, the building’s main façade. Part of this façade was given double layer outfit to conceal the pipes and grills and keep the simple and clean look of the façade.

On contrary to its bright white façade, colorful space opens up as opening the red door. Walking from the entrance of the building to the door of each apartment, people would find unexpected scene each time they turn around a corner. The yellow staircase intersects aqua blue and lime colored walls. Each time people open up the red door they will face colorful image set in door frame.

Its name YOAP White House comes from Korea word yoap, meaning just around or nearby. This small housing will stand in the corner site of old resident area of Bangbae-dong, giving intimate image like its name.”

The Charcoal House by rzlbd

The Cracked House in Seoul by Mass Studies

Apartment in Arklių Street by DO Architects

House AT by MIRAG Arquitectura i Gestió