Trastevere is a cozy studio apartment located, as its name suggests, in Trastevere, a district of Rome, Italy.

It was completed by Archifacturing in 2011, and flawlessly combines modern elements with the more traditional aspects of the existing structure. 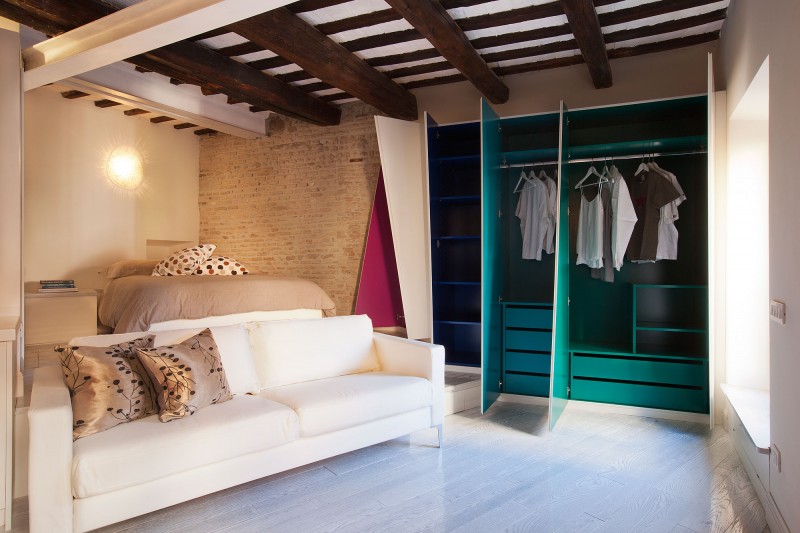 “A 38 sq m (410 sq ft) suite in the heart of the historical quarter of Trastevere. The designers, Sara Cimarelli and Giorgio Opolka, partners in the Archifacturing office, have designed and created a solution for exploiting the available space to the full, enhancing the perception of permeability amongst the environments, while maintaining a clear division of the functional spaces.

The careful design of the furniture has permitted cohabitation of several functions in the same space; living room, kitchen, dining room, bedroom and changing room. The designers’ choice of developing the floor space over two levels has made it possible to divide the living and sleeping areas in a functional manner. The space obtained in the 45 cm (18 in) of height difference contains four large top opening lockers, two drawers and a spare 1 ½ place bed.

The interior furnishing has been made to measure, from the white lacquered wooden kitchen to the Corian top, from the wardrobes to the white lacquered oak flooring with silvery sheen, from the raised floor structure with its “secret” containers to the bathroom door and even the classic skirting board; all are rigorously white to make the chestnut wood beams of the ceiling stand out . The only exception is the inside of the main wardrobe which reveals a coloured interior on opening.

The only vertical volume present in the house contains a 3 sq m (32 sq ft) bathroom. Inside this tiny bathroom with its restored 18th century floor and the black slate tiling of the shower there is an elegant blend between the use of the vertical mirror and the transparent glass of the ceiling which allows natural lighting to come in.

The transformation of the existing space has been obtained without changing the characteristics of the original structure, indeed the visible wooden beam ceiling and two original stone walls stand out even more. The flat is warm with classic allure highlighted by the choice of natural materials reinterpreted from a modern viewpoint.”

The Trastevere Loft in Rome by MdAA architects

A Vibrant and Colorful Apartment in Pinheiros