Residencia Tambore is a private home designed by Conseil Brasil‏.

It is located in Tambore, São Paulo, Brazil, and has a bright and elegant interior. 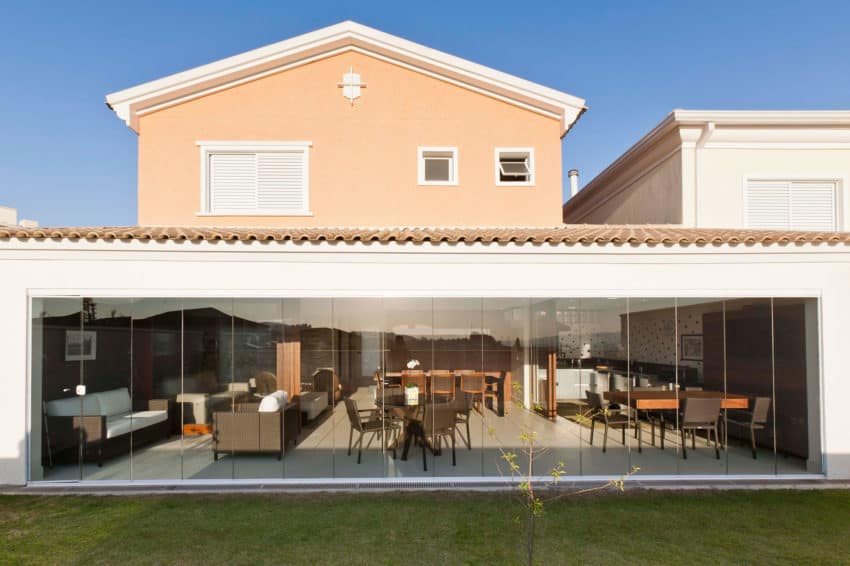 “Considering his enormous admiration for Ludwig Mies van der Rohe – a major 20th century German architect who helped define modern architecture – the architect Anna Novaes, of the Conseil Brasil office, created the project of a residence of 230m² with concepts of architecture created by famous professional.

The references used were taken mainly from the German pavilion design for World Expo 1929 in Barcelona, popularly known as the Barcelona Pavilion, which complete 85 years in 2014.

Van der Rohe innovated structures and valorized open spaces. Extended environment when using glass as partitions, also on facades. For the first half of the last century these features were great innovations, and gave him recognition. Their concepts of the construction and urban planning were expanded and used later in projects worldwide, including the elaborated by Conseil Brasil.

In the residence, located in Alphaville, Sao Paulo, the architect opted to integrate all social environments – dining room, breakfast room, TV room, gourmet and livings – and at the same time, separate them only by partitions glass in the model of sliding doors. This results in the incidence of natural light in every room . The kitchen, in turn, is separated from other spaces by a panel developed by Anna Novaes.

This mix of materials, especially with the glass composition is strong feature in the designs of Van der Rohe. Other highlights are the straight lines and structural objectivity, clearly perceived in the residence.

The German architect was also the creator of the famous phrase ” less is more ”. This means that sometimes the simplicity of a project and a well designed architecture is sufficient to cause her evidence, because the real beauty is inherent in the essential elements.

In the design of Anna Novaes, the concept for the decoration was no different. The architect chose to invest in structural motifs and fixed decoration, as differentiated coatings, plus the choice of a palette of muted and neutral colors used elegant way, without extravagance, in all environments, even in intimate.

“Mies van der Rohe is one of my great idols. Thus, their conceptions end up being absorbed in my projects. In particular, almost all structural items can be associated with it. Even the rear facade, which is entirely of glass” – says Anna Novaes.”

A Bright Contemporary Home in Los Gatos, California Designed by Schwartz and Architecture