It is located in Twentynine Palms, California, USA and was finished in 2012. 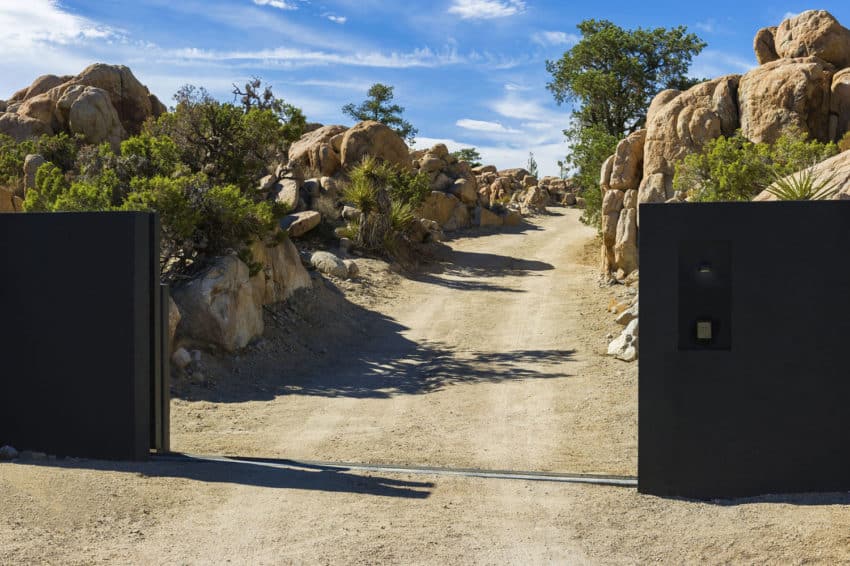 “This project began with an e-mail and a meeting in fall of 2008 for a house in Yucca Valley, which is located near Palm Springs, east of Los Angeles in the high desert near the Joshua Tree National Park.

We had completed two projects in Yucca Valley and occasionally received inquiries about projects in the desert. In the midst of the economic downturn typically these inquiring led nowhere. We had just had our second child and things were looking rather uncertain. We decided to meet with Marc and Michele Atlan to see if their project was a reality. Even from the first communications, Marc’s enthusiasm was noticeable.

After the first meeting, we found that we shared a common aesthetic and process and after seeing the property we knew this was a project like nothing else we had done, really almost a once in a lifetime opportunity. There was no looking back, we immediately began work on the house.

Beyond the technical and regulatory challenges of building on the site- several previous owners had tried and given up there was the challenge of how to build appropriately on such a sublime and pristine site. It is akin to building a house in a natural cathedral.

Our client had given us a brief but compelling instruction at the start of the process- to build a house like a shadow. This had a very specific relevance to the desert area where the sunlight is often so bright that the eye’s only resting place is the shadows.

Unfortunately, the site had been graded in the 1960′s when the area was first subdivided for development. A small flat pad had been created by flattening several rock outcroppings and filing in a saddle between the outcroppings. To try to reverse this scar would have been cost prohibitive and ultimately impossible. It would be a further challenge to try to address this in the design of the new house. The house would be located on a precipice with almost 360 degree views to the horizon and a large boulder blocking views back to the road.

A long process of research began with the clients showing us images of houses they found intriguing- mostly contemporary houses that showed a more aggressive formal and spatial language than the mid-century modern homes that have become the de-facto style of the desert southwest.

We looked back at precedents for how architects have dealt with houses located in similar topography and found that generally they either sought to integrate the built work into the landscape, as in the work of Frank Lloyd Wright and later Rudolf Shindler or to hold the architecture aloof from the landscape as in the European modernist tradition of Mies van der Rohe. While on a completely virgin site, the lightly treading minimalist approach would be preferred, here we decided that the Western American tradition of Land Art would serve as a better starting point, marrying the two tendencies in a tense relationship with the house clawing the ground for purchase while maintaining its otherness.

The house would replace the missing mountain that was scraped away, but not as a mountain, but a shadow or negative of the rock; what was found once the rock was removed, a hard glinting obsidian shard.

Concept in place, we began fleshing out the spaces and movement through the house. We wanted the experience of navigating the house to remind one of traversing the site outside. The rooms are arranged in a linear sequence from living room to bedrooms with the kitchen and dining in the middle, all wrapping around a inner courtyard which adds a crucial intermediate space in the entry sequence and a protected exterior space in the harsh climate.

The living room was summed up succinctly by Marc as a chic sleeping bag. The space, recessed into the hillside with a solid earthen wall to lean your back against as you survey the horizon is a literal campsite which finds its precedent in the native cliff dwellings of the Southwest.

The dark color of the house interior adds to the primordial cave-like feeling. During the day, the interior of the house recedes and the views are more pronounced. At night the house completely dematerializes and the muted lighting and stars outside blend to form an infinite backdrop for contemplation.

The project would never have come about without the continued efforts of the entire team. The design was a collaborative effort between Marc and Michele and the architects. The patience and dedication of the builder, Avian Rogers and her subcontractors was crucial to the success of the project. Everyone who worked on the project knew it was something out of the ordinary and put forth incredible effort to see it completed.”

One Comment to Yucca Valley House 3 by Oller & Pejic Architecture