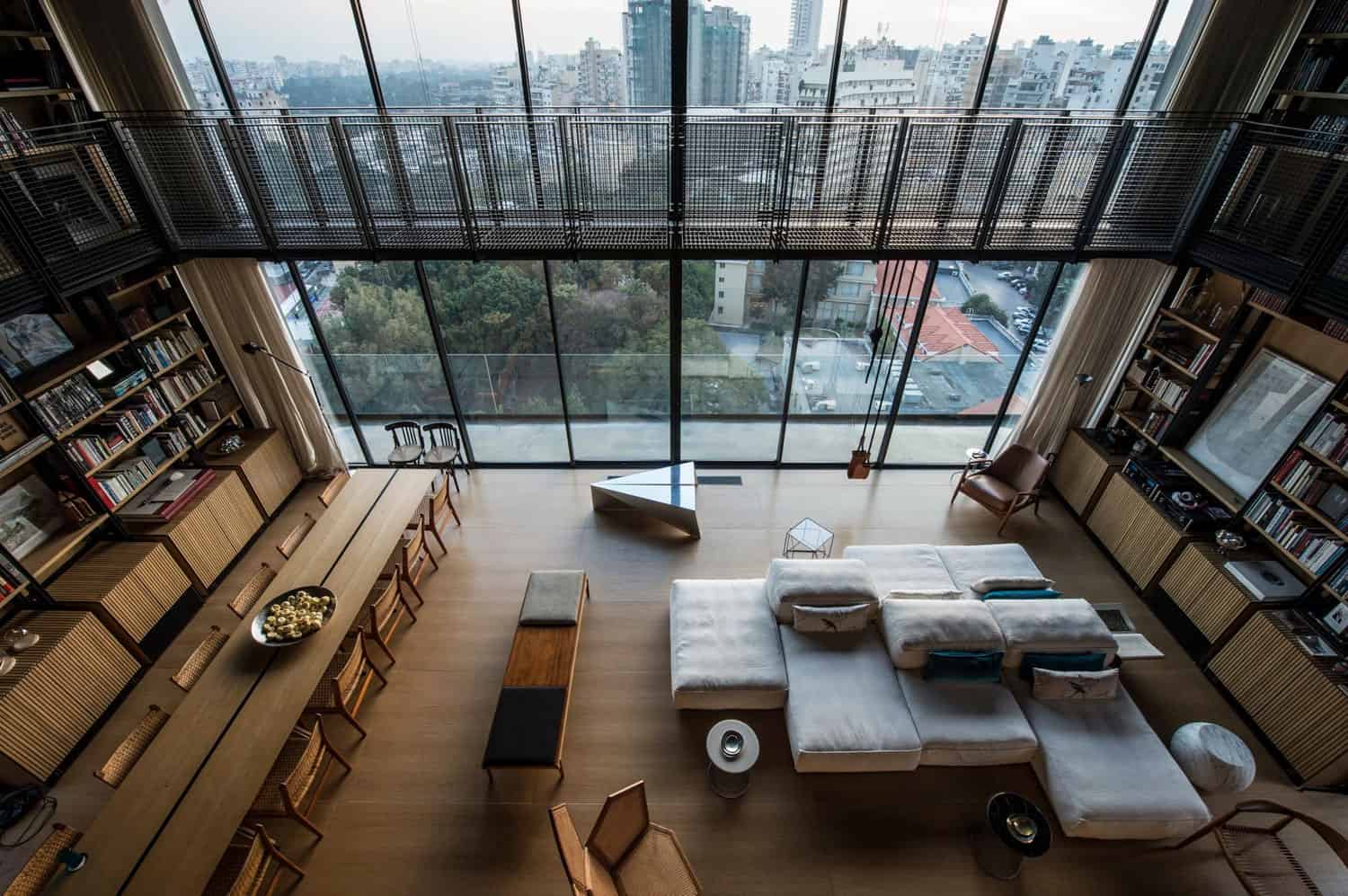 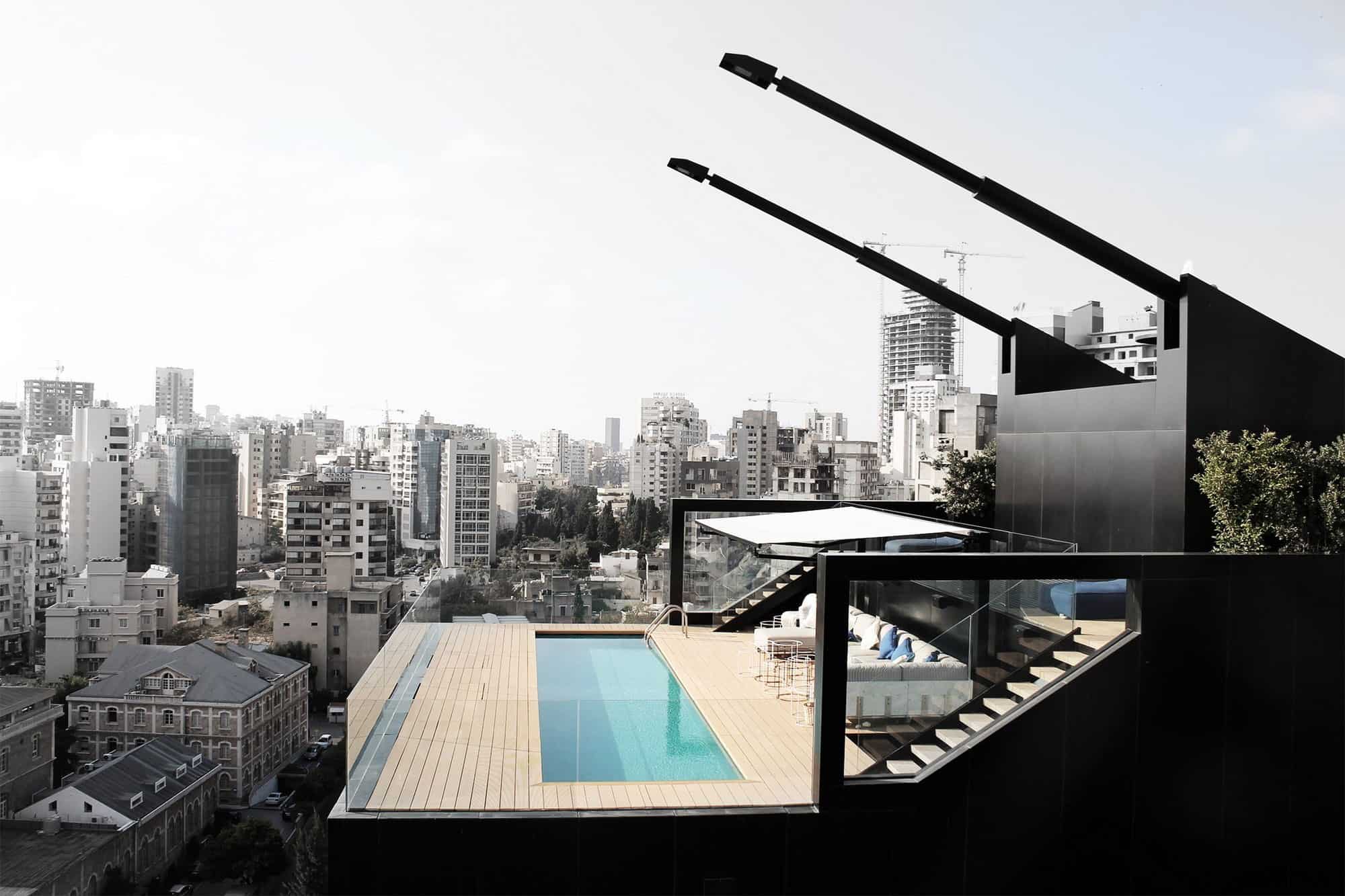 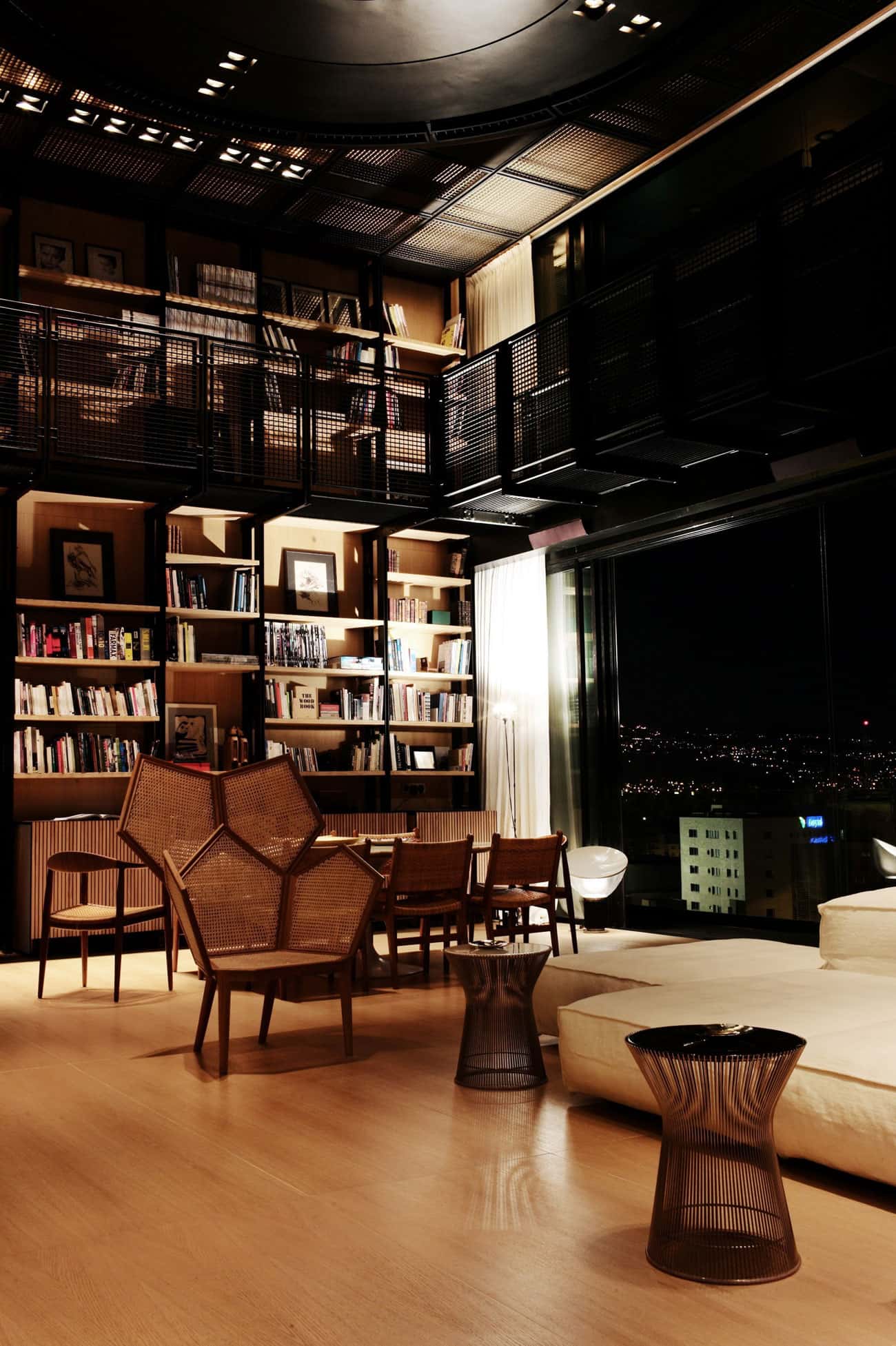 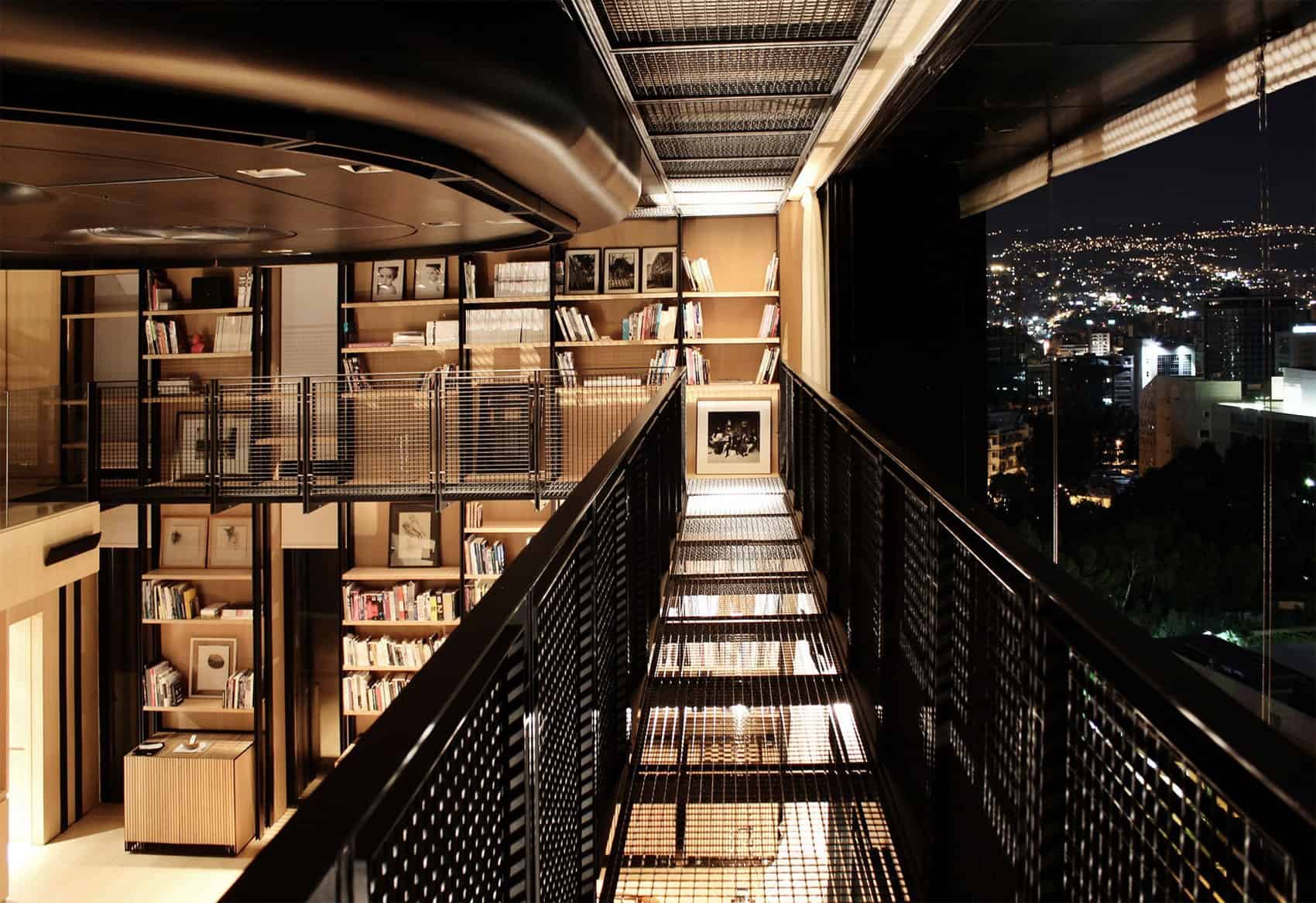 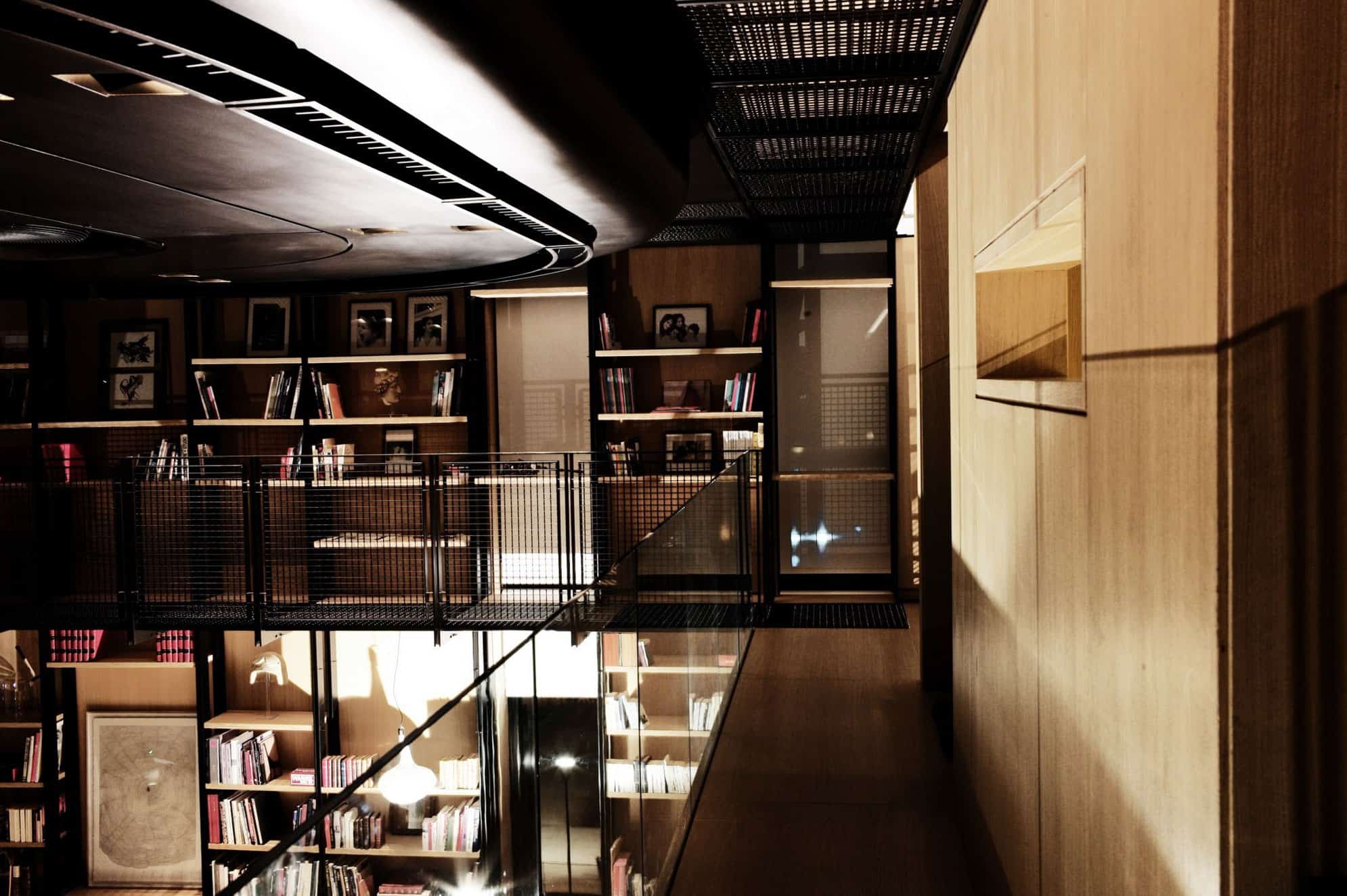 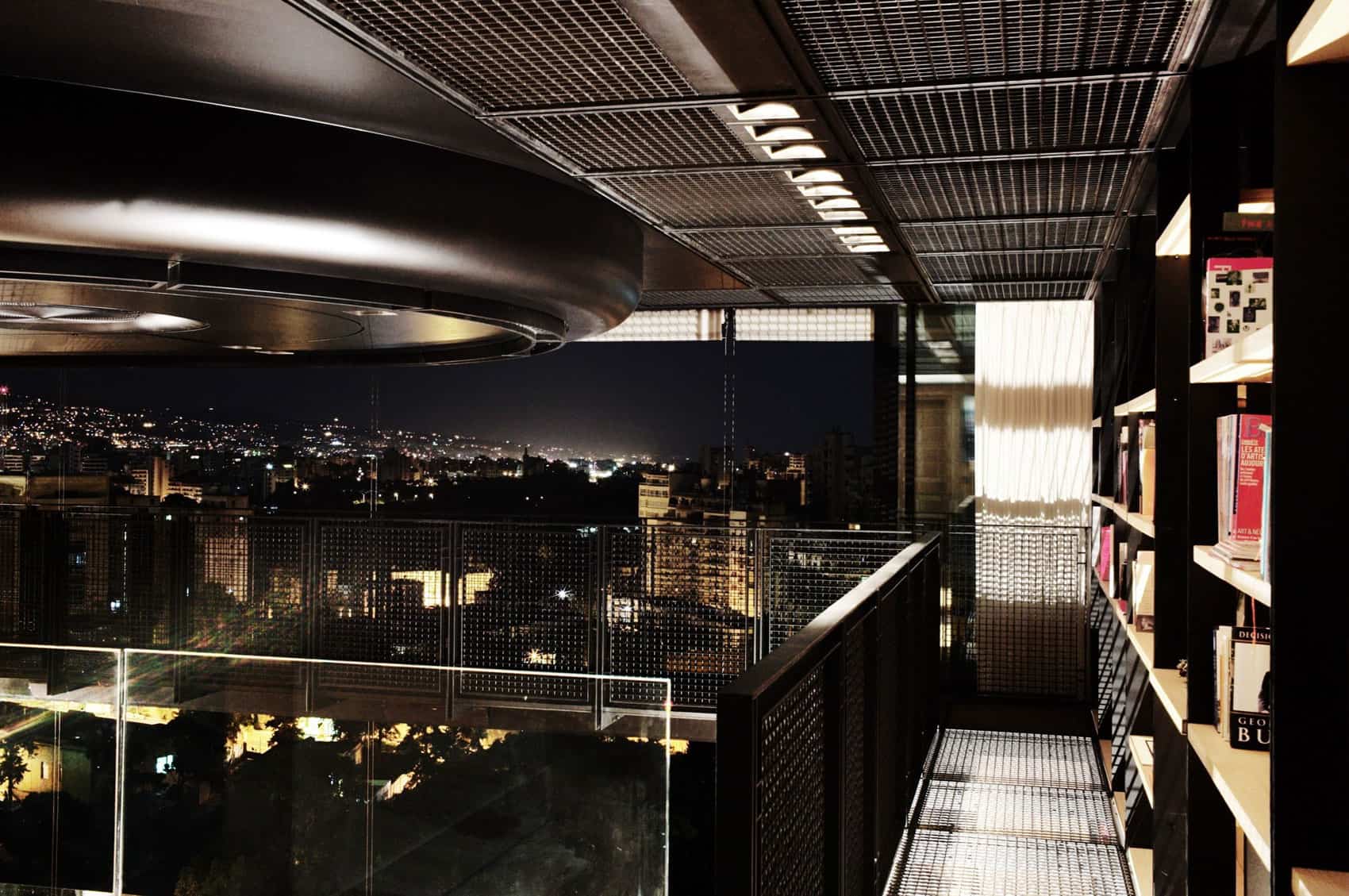 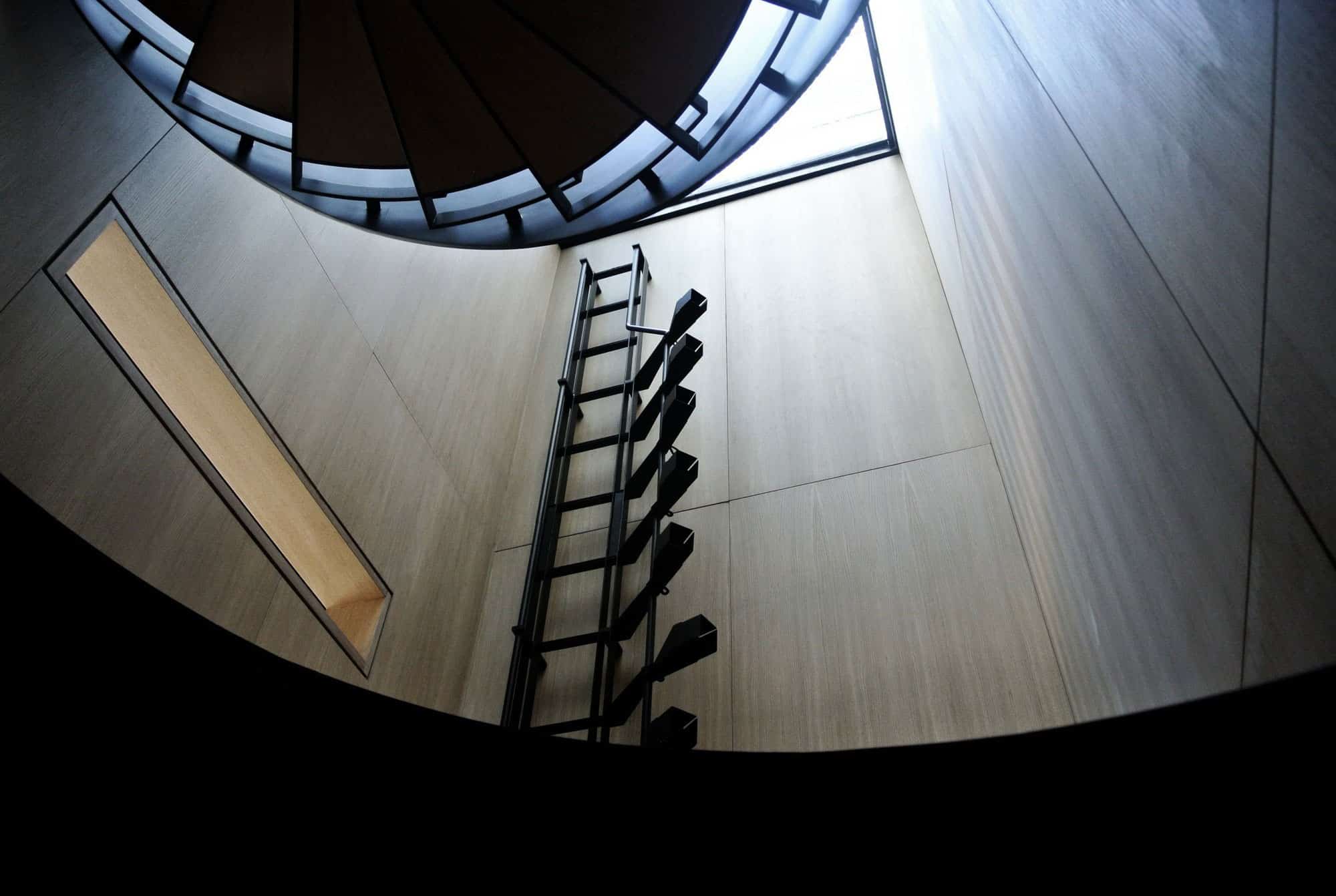 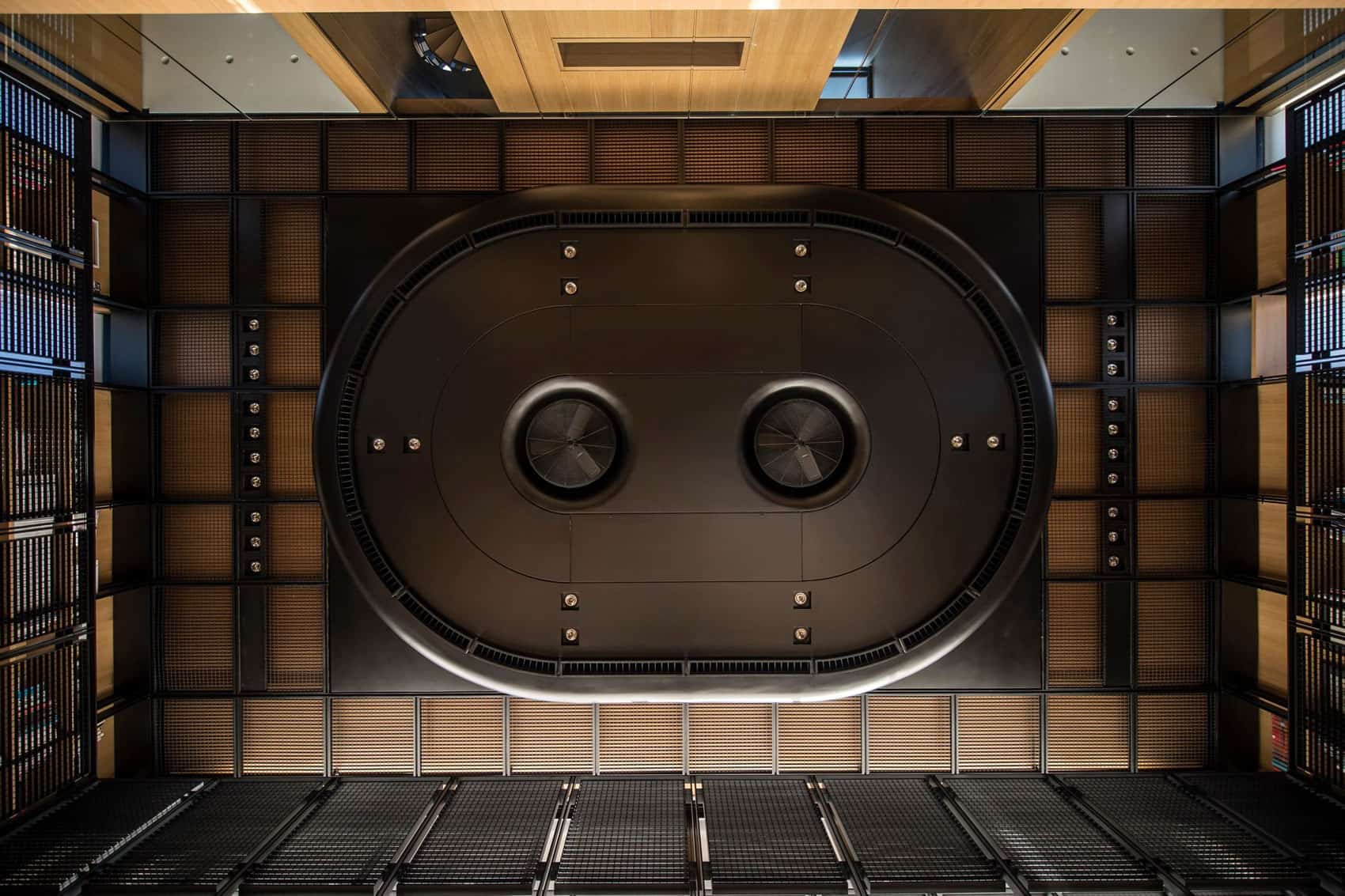 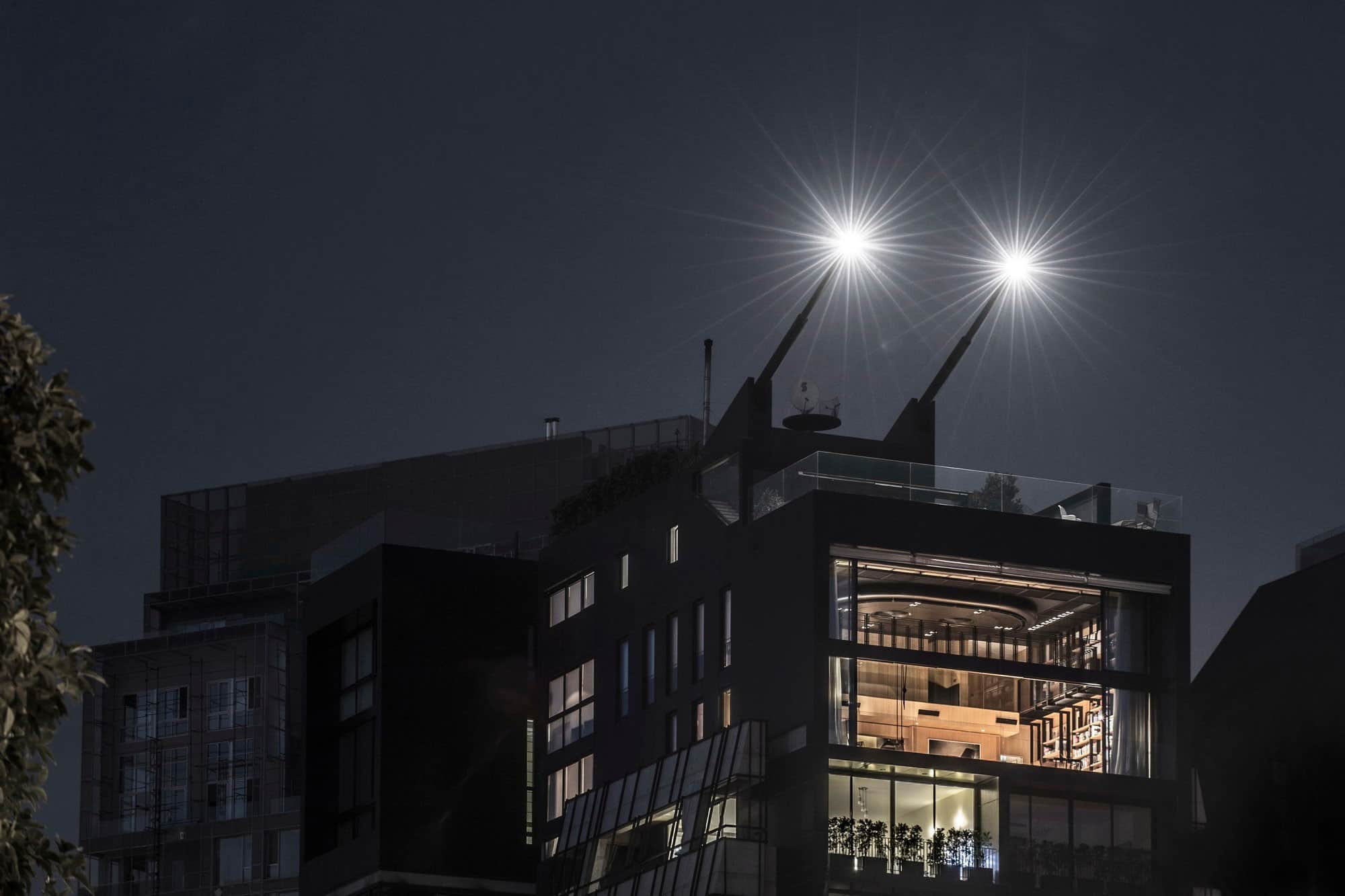 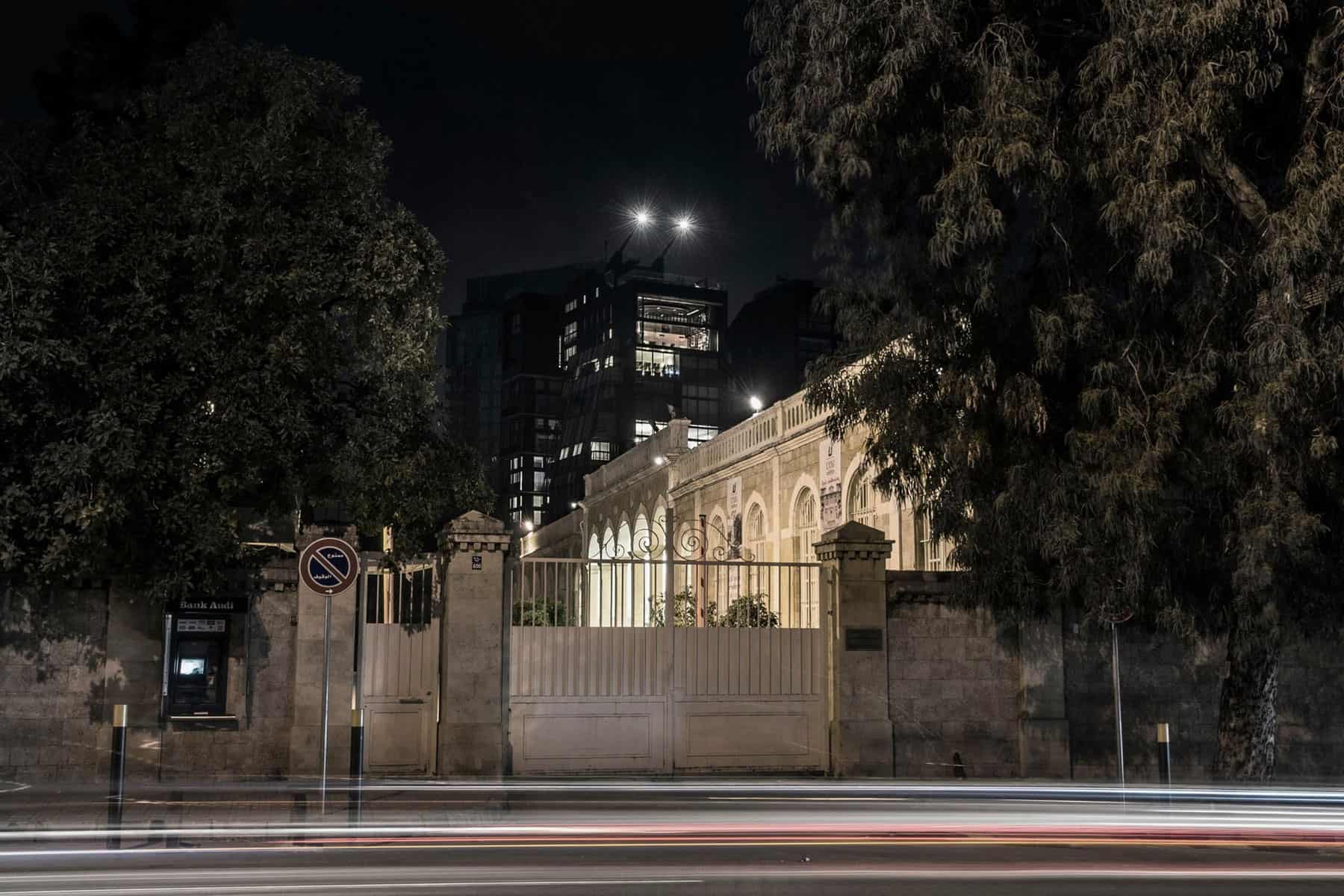 Completed in 2013, the home is located in Beirut, Lebanon.

“Located at the ninth and last level of the Plot # 2251 project which we conceived in 2008 and for which construction ended in 2013, this three-storey apartment is articulated through an independent structure capping the building. Structurally, the apartment only shares the building’s vertical circulation core, as well as the perimeter along which its two peripheral walls lie. Beyond the ninth level, the structure of this residence becomes autonomous, rendering it morphologically detached from the edifice. The result is what resembles an independent house placed atop a building, rather than what is commonly known as a penthouse or roof level apartment.

The articulation of this project is also related to its geographic location. Virtually situated on the former demarcation line which separated east and west Beirut, this apartment opens up onto “the hell” of its city, placing it neither east nor west but in between. Whereas usual preference for Mediterranean roof apartments is to turn their backs on the urban fabric in exchange for a sea view, this apartment is oriented toward the city, taking advantage of the setbacks imposed due to the surrounding projects defining its entire periphery. These include the Maronite Cemetery, the Beirut Hippodrome and various institutional buildings. All relatively low-rise, these guarantee view corridors extending in the southwestern direction towards the Chouf mountains which subside in the southern suburbs of Beirut, as well as in the western direction and towards the former demarcation line defined by Damascus Road.

This situation in fact informed and defined the large frame instantaneously experienced upon one’s arrival to the apartment. 12 meters (37.4 feet) wide and 6 meters (19.7 feet) high, the reception which extends from the landing is an almost exaggerated, unobstructed and completely open space.

The apartment comprises three levels, the reference level being the landing floor throughout which the vital programmatic functions take place – the reception space, the dining room, the master bedroom as well as the kitchen. The mezzanine level accommodates two additional bedrooms, as well the continuation of the floor-to-ceiling library accessible at this level by a steel grating bridge crossing the entire frame of the reception, and seemingly floating once the floor-to-ceiling glazing is retracted. Lastly, the uppermost level houses the pool terrace, as well as a guest studio and staff quarters.

N.B.K. Residence 2 resumes certain experimentations with interior layouts, furnishings and materials used in various projects throughout the years, including N.B.K. Residence 1 which was conceived 12 years earlier. The experience gained by these allowed for the development of a certain knowledge related to the misappropriation and reinterpretation of traditional materials, through the reanimation of specific artisanal practices. Alliances formed with local artisans over the years were thus rekindled, and materialize in the intricate steelwork and elaborate woodwork of the apartment, notably in the reception area.

The wood panel cladding of the reception space is defined by a layout that starts at the floor, folding onto the walls and ceiling, and extending throughout the rest of the rooms. This same cladding layout defines that of the steelwork, which ultimately frames the focal point of the room, a piece affixed to the ceiling housing all air conditioning and ventilation equipment. The modern tradition has rarely worked the ceiling, and this element thus takes us back to traditional interior architectural practices. However, rather than a fresco, this installation consists of an extremely dense hood-like structure, designed to perfection in coordination with a mechanical engineer, with plaster as the material of choice. A traditional material typically associated with ornamental cornices and mouldings within a typically classical language, the plaster is in this case painted black rather than white, and misappropriated to portray a much more contemporary and machinist expression. The result is an alien-like object seemingly hovering above the space, clearly portraying an unconventional form and aesthetic conceived using an artisanal trade as well as the perversion of a traditional material.

Lastly, the outdoor pool terrace at the roof level is crowned by two antennae containing the area’s light fixtures. Southwardly oriented, these probe-like pivoting projections exceed the height average of their adjacent buildings, making them visible from surrounding neighbourhoods.”