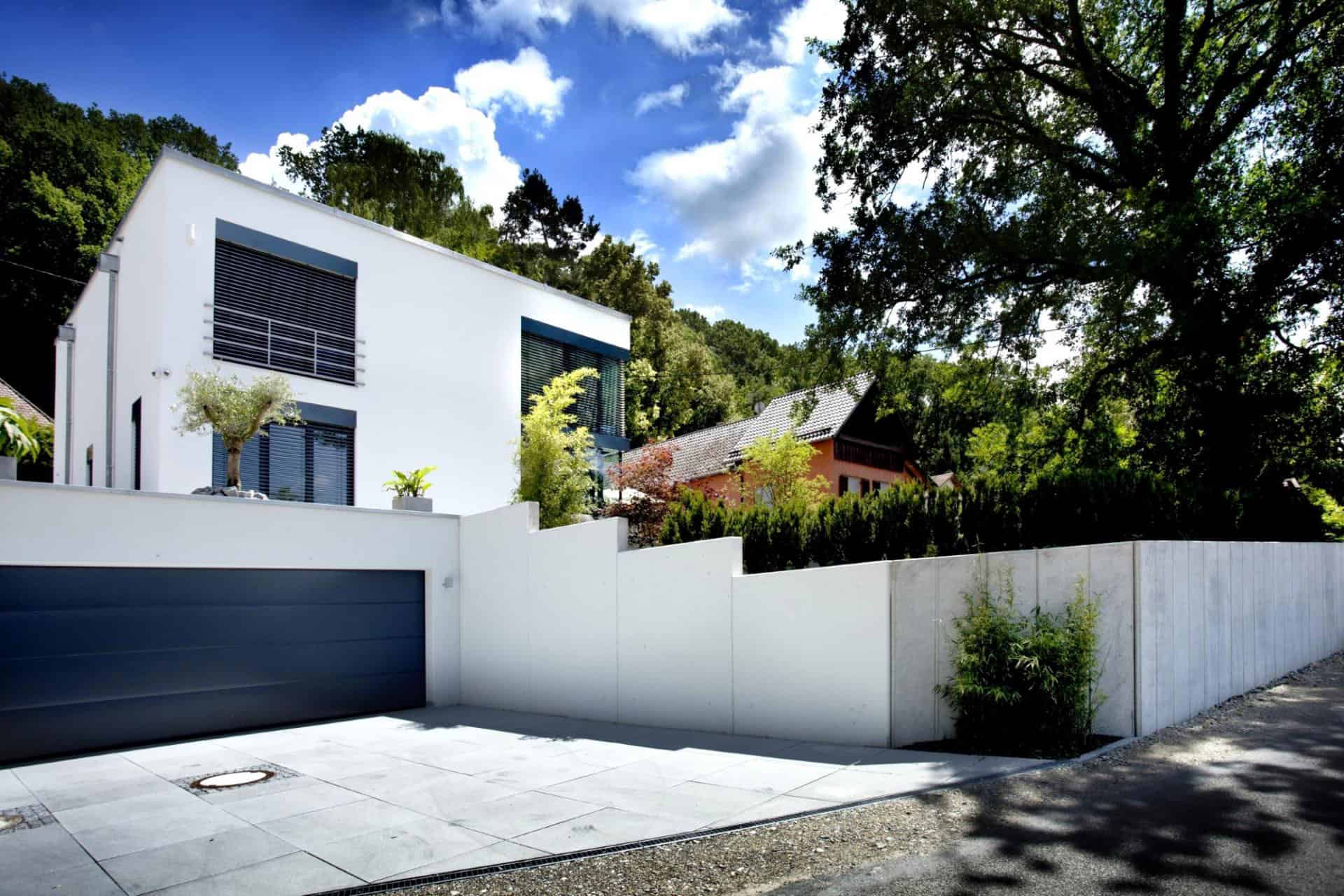 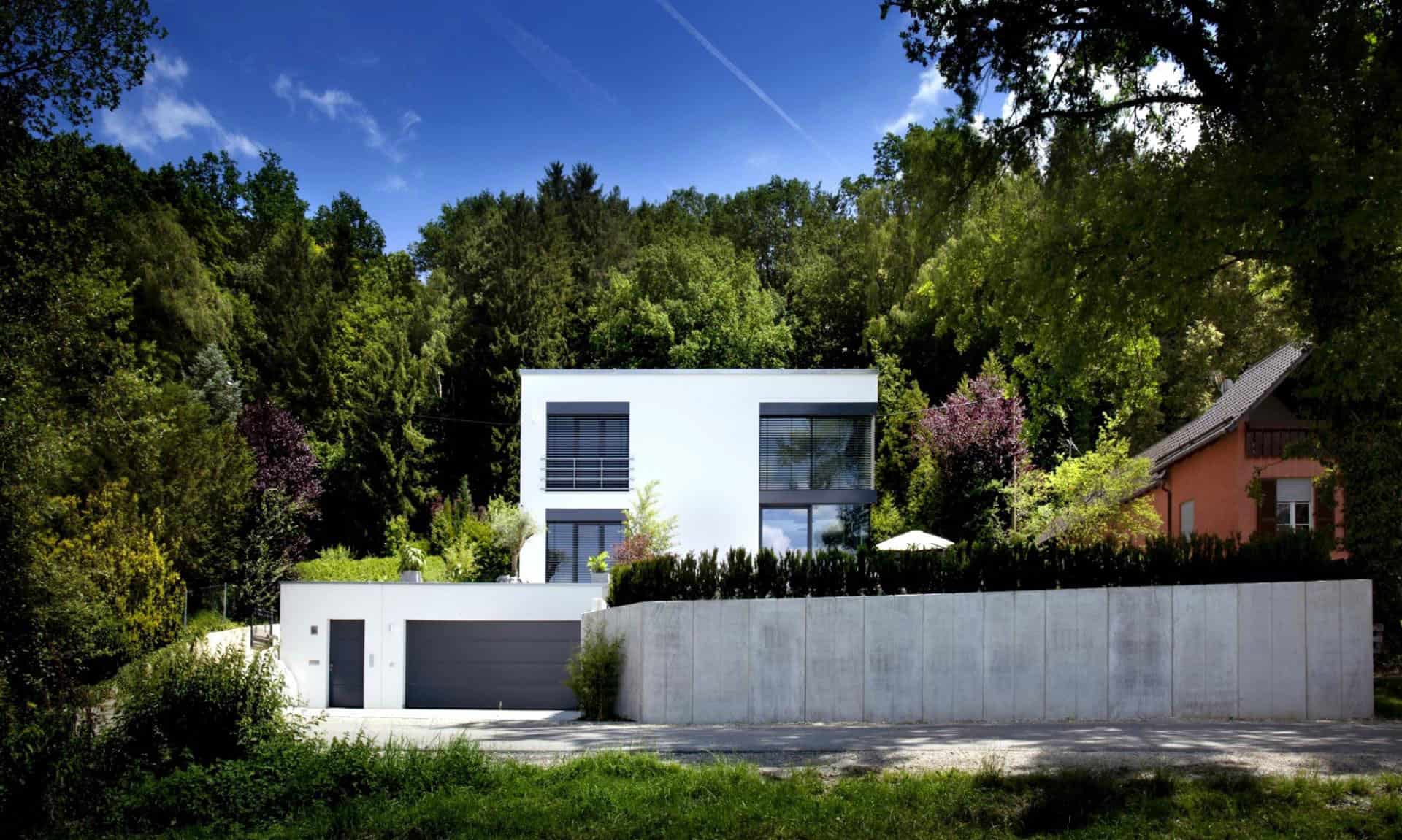 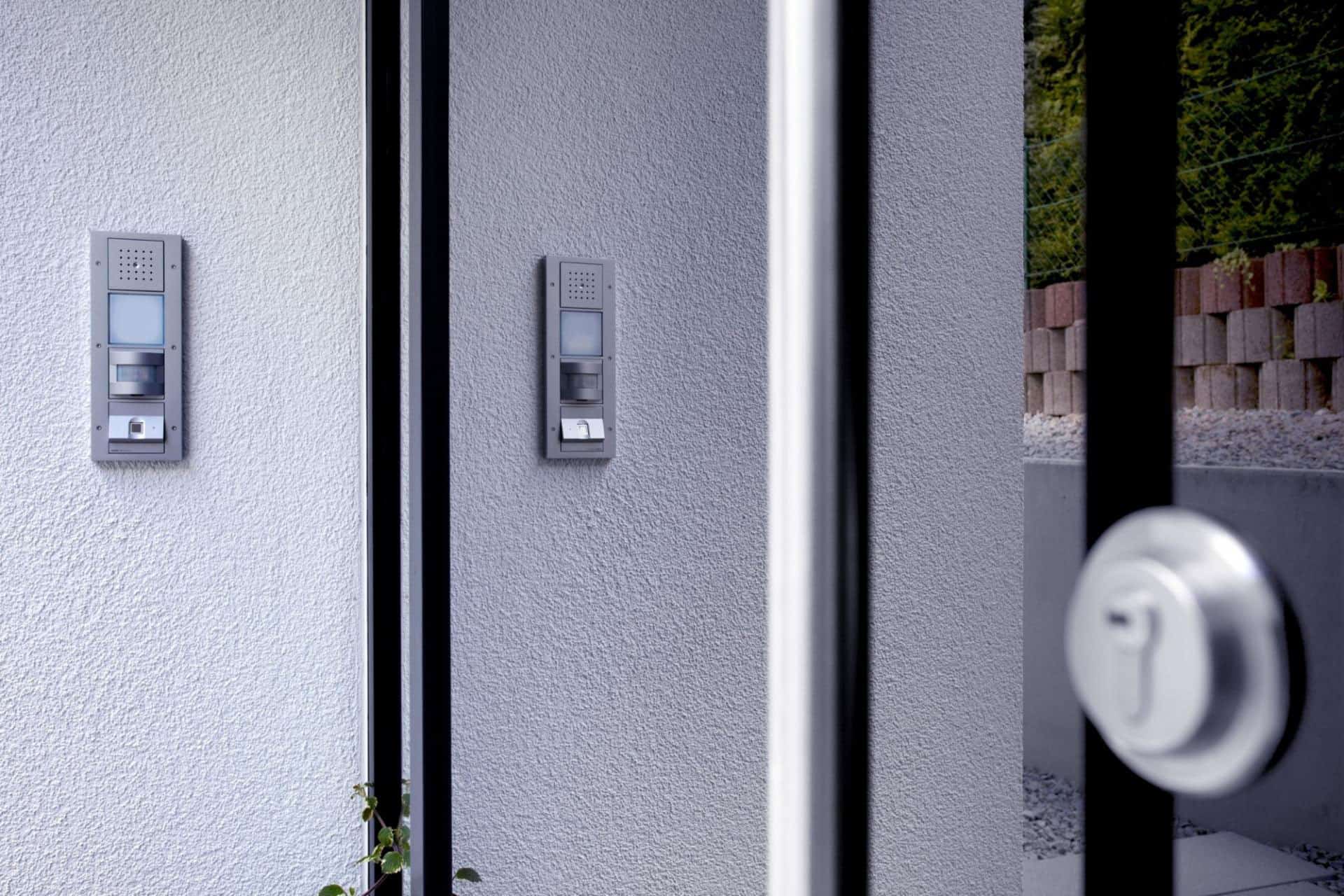 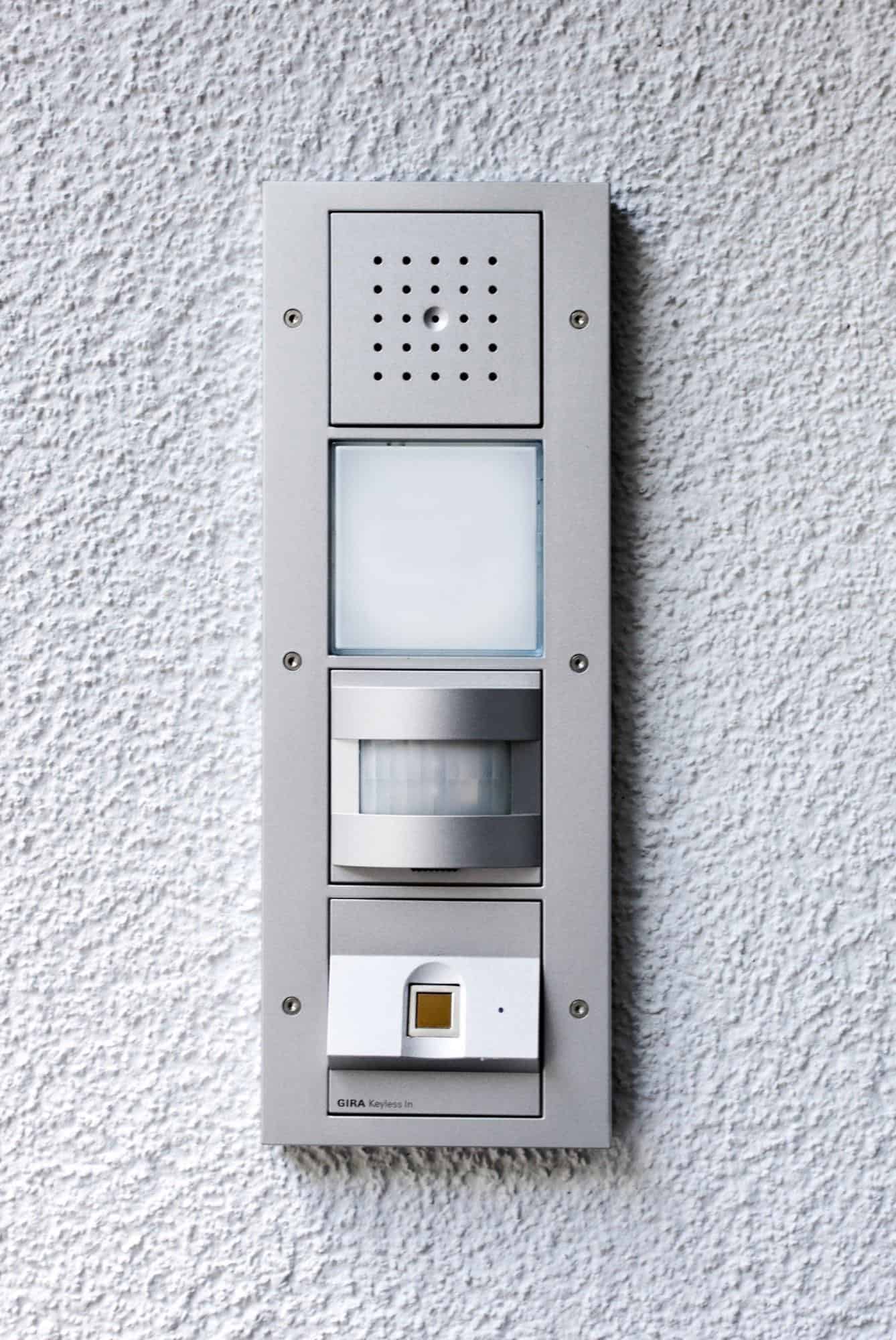 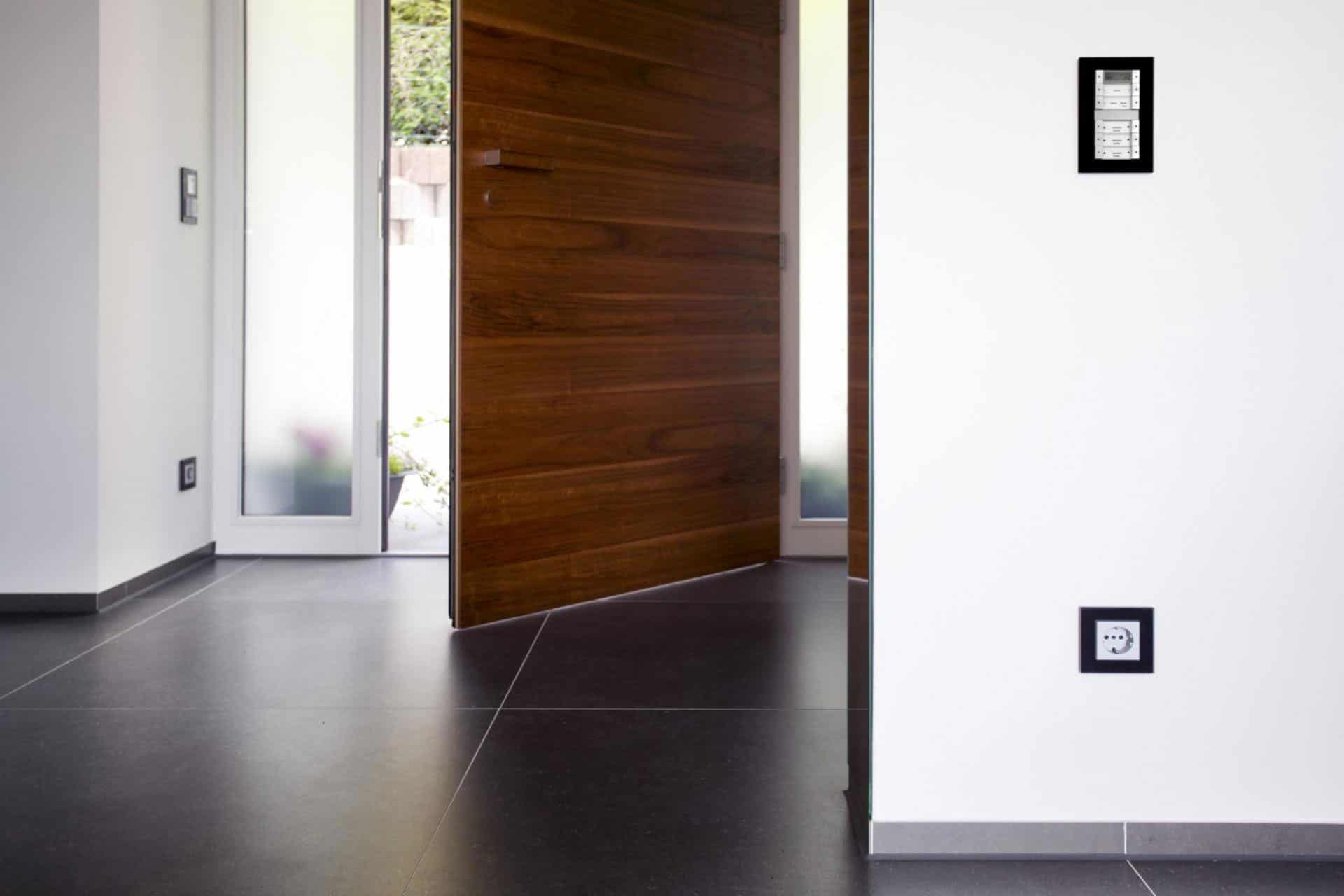 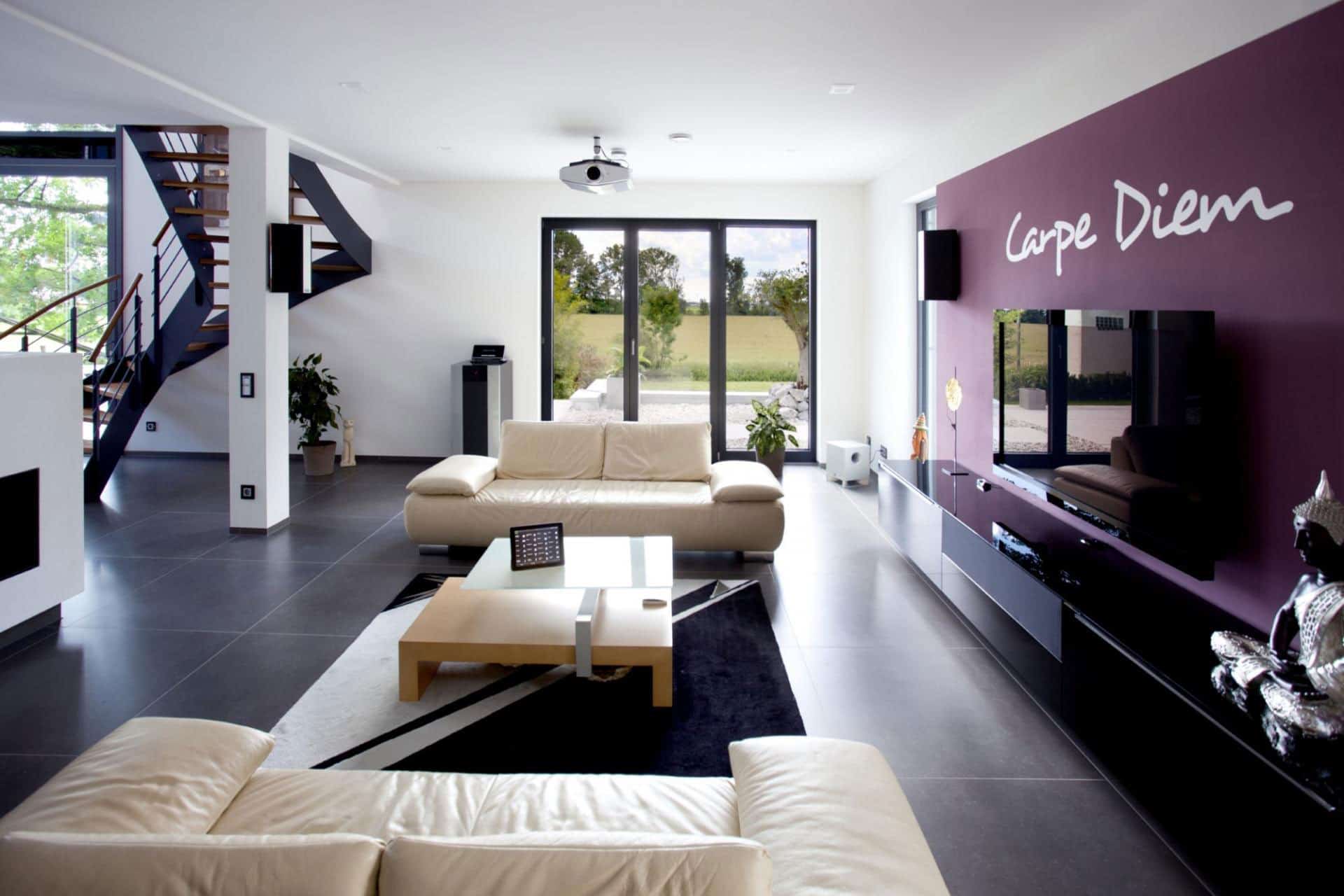 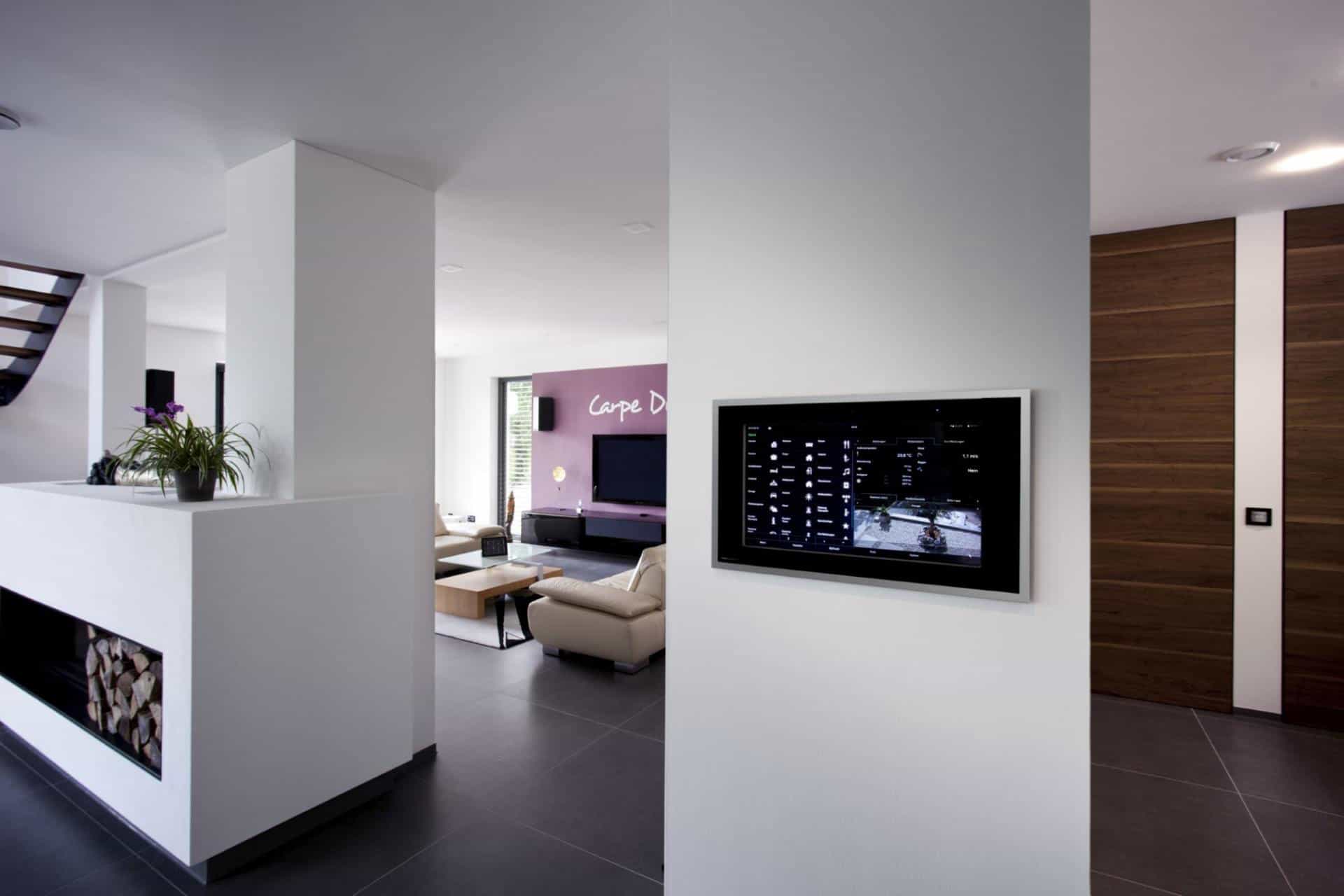 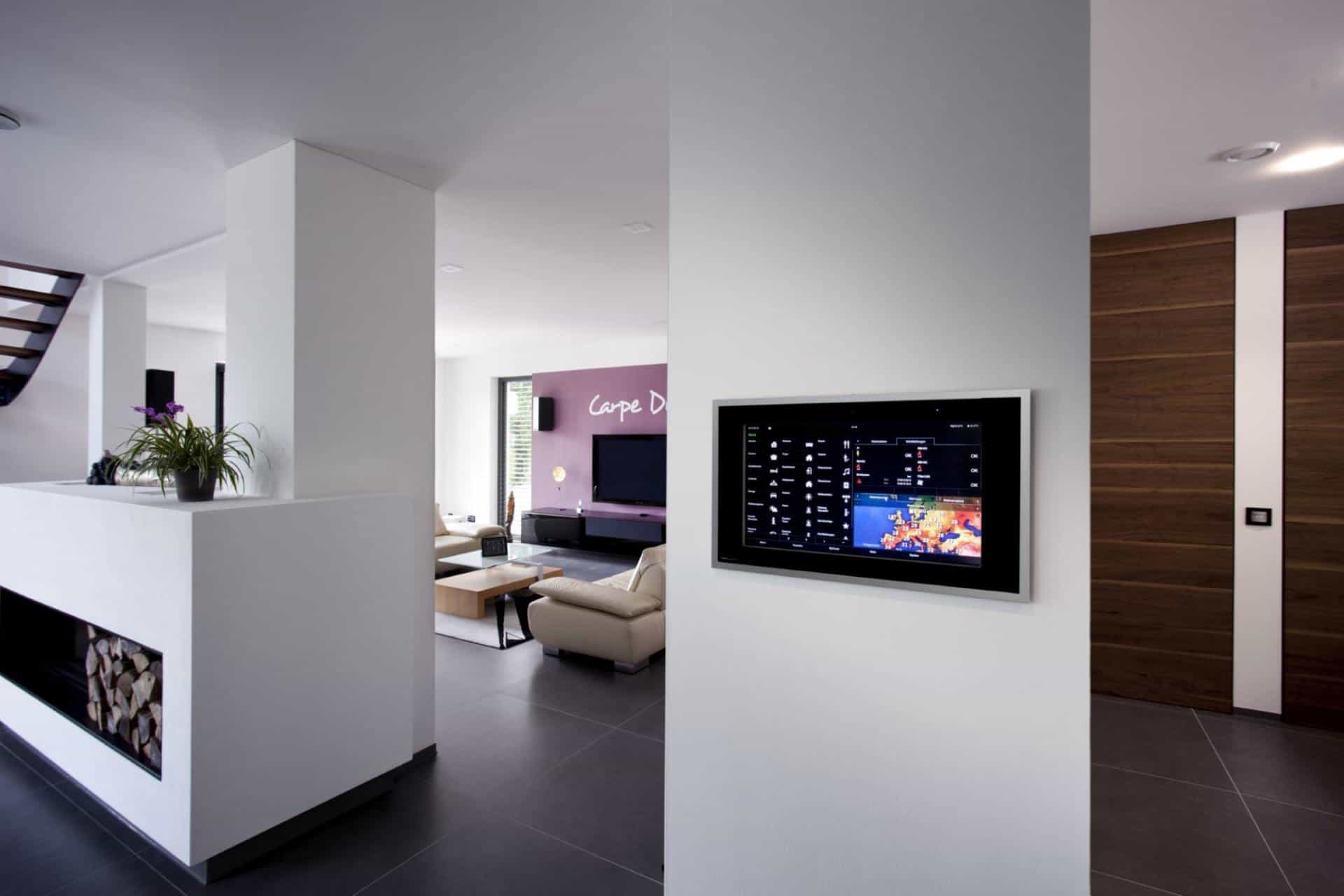 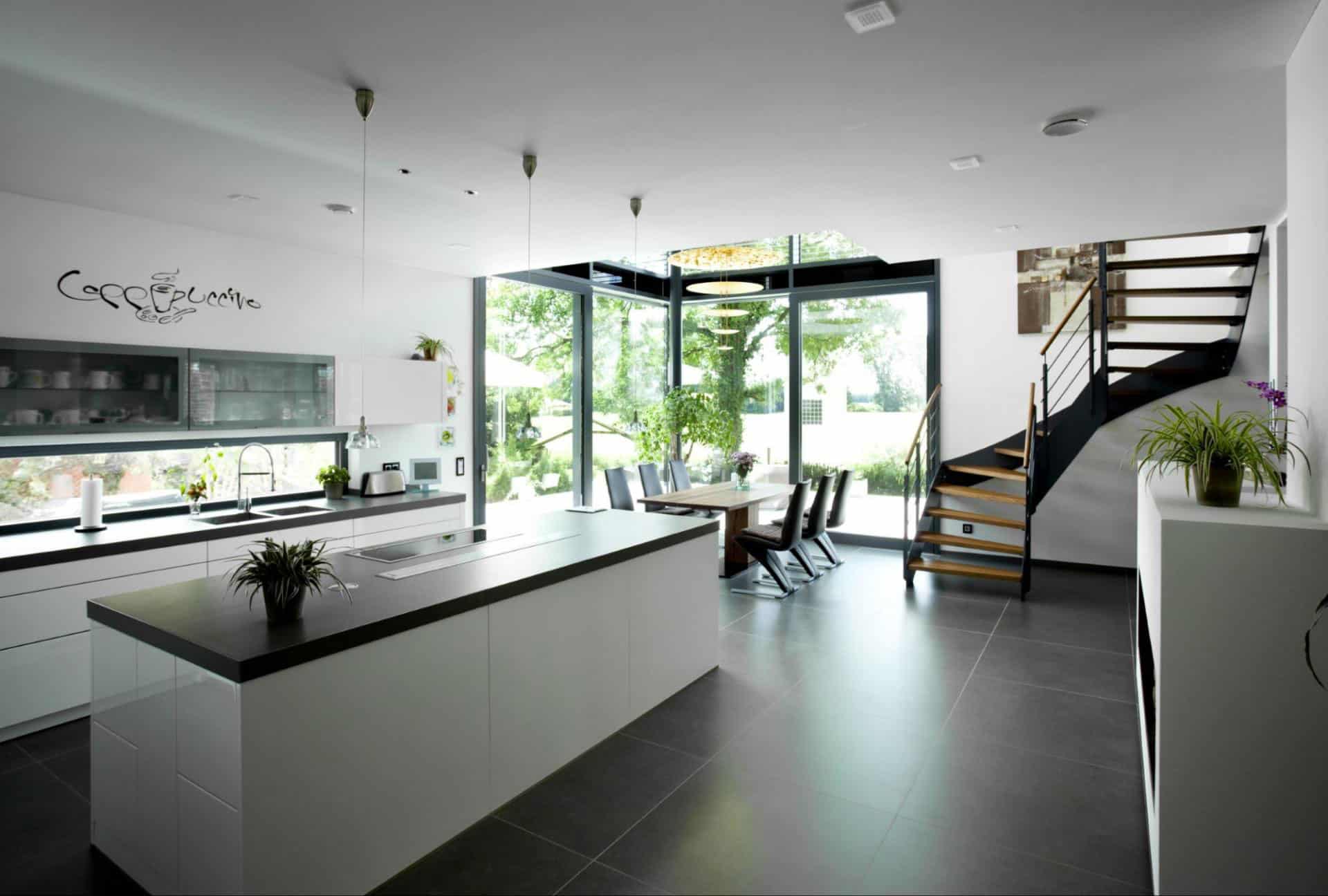 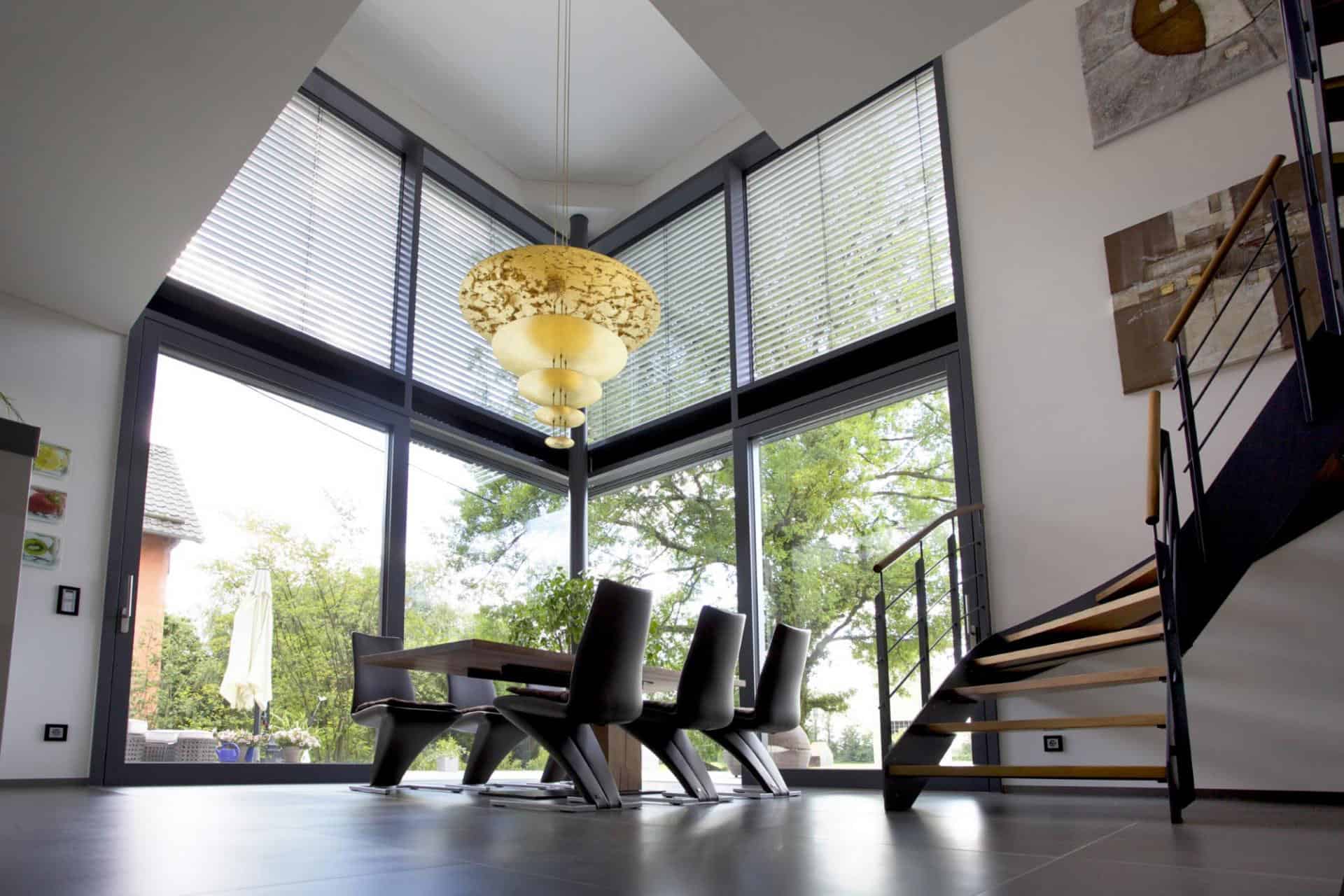 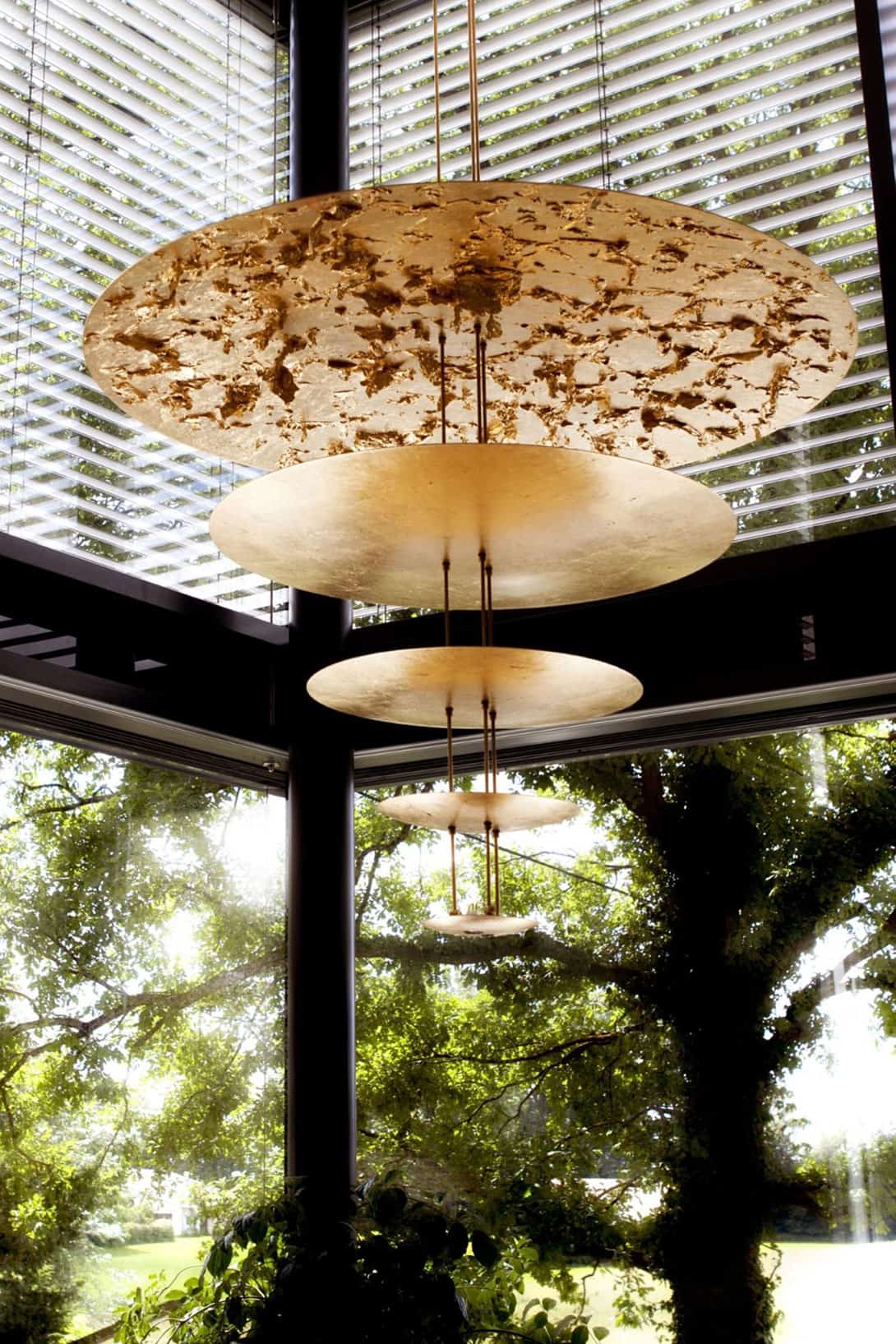 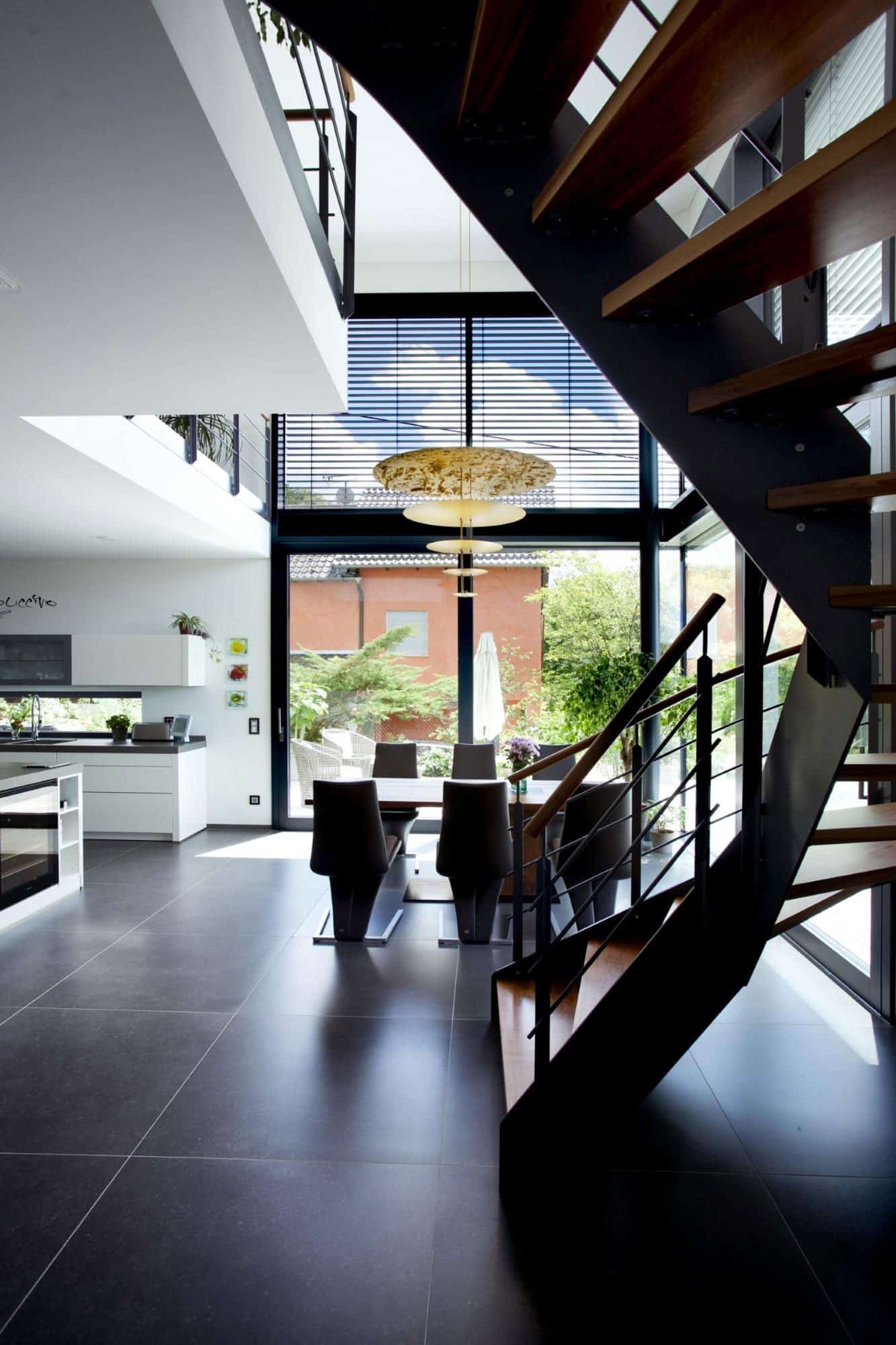 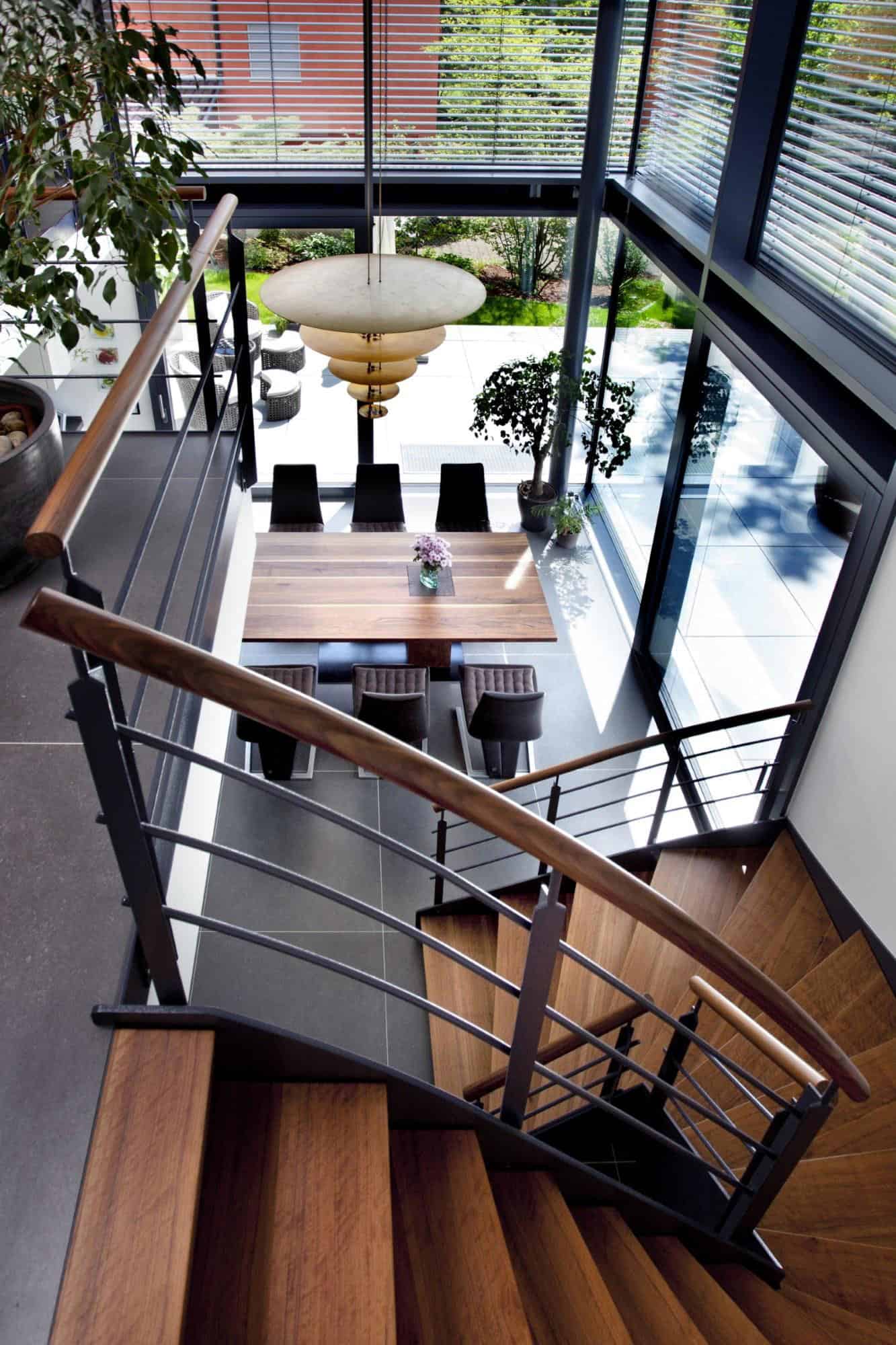 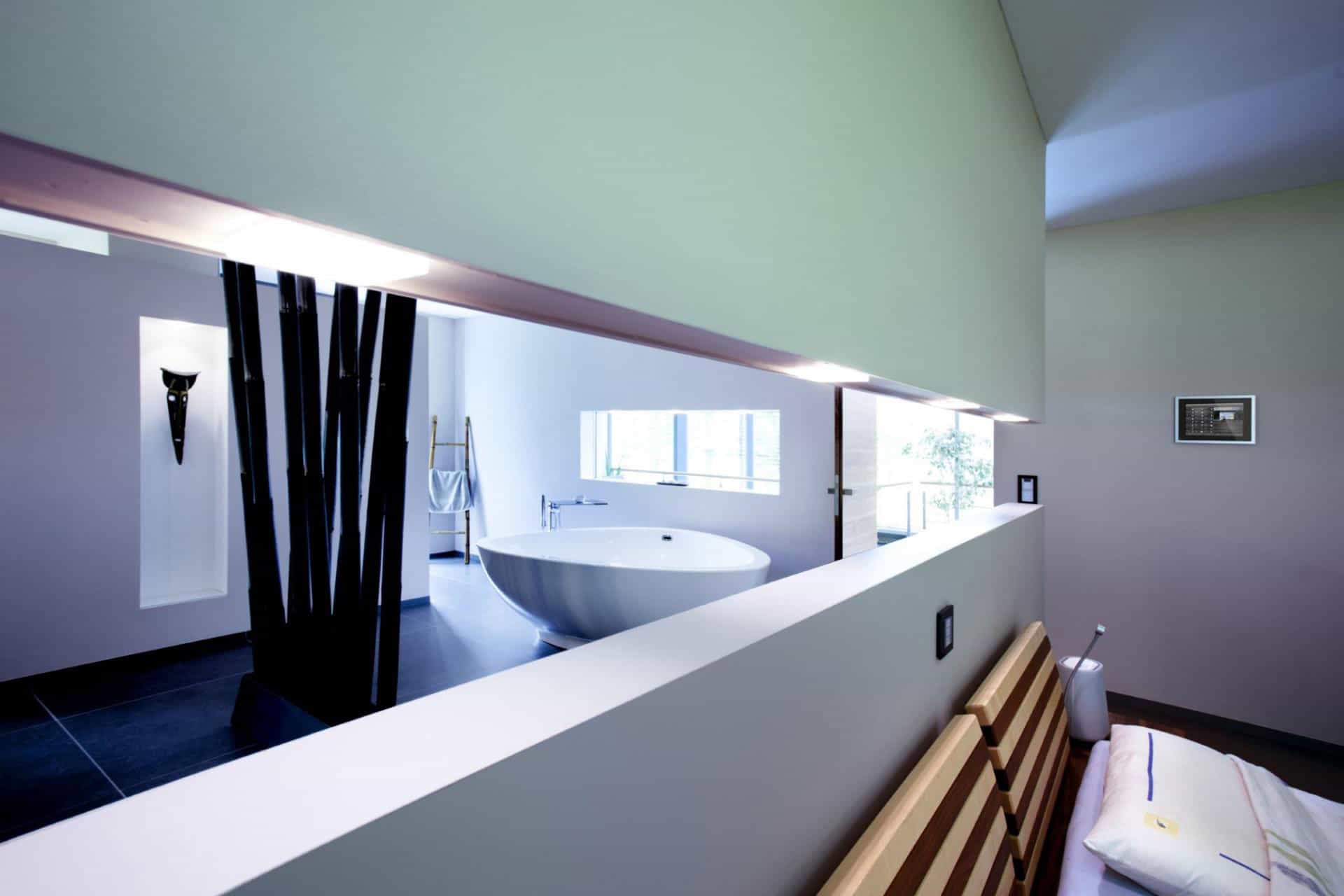 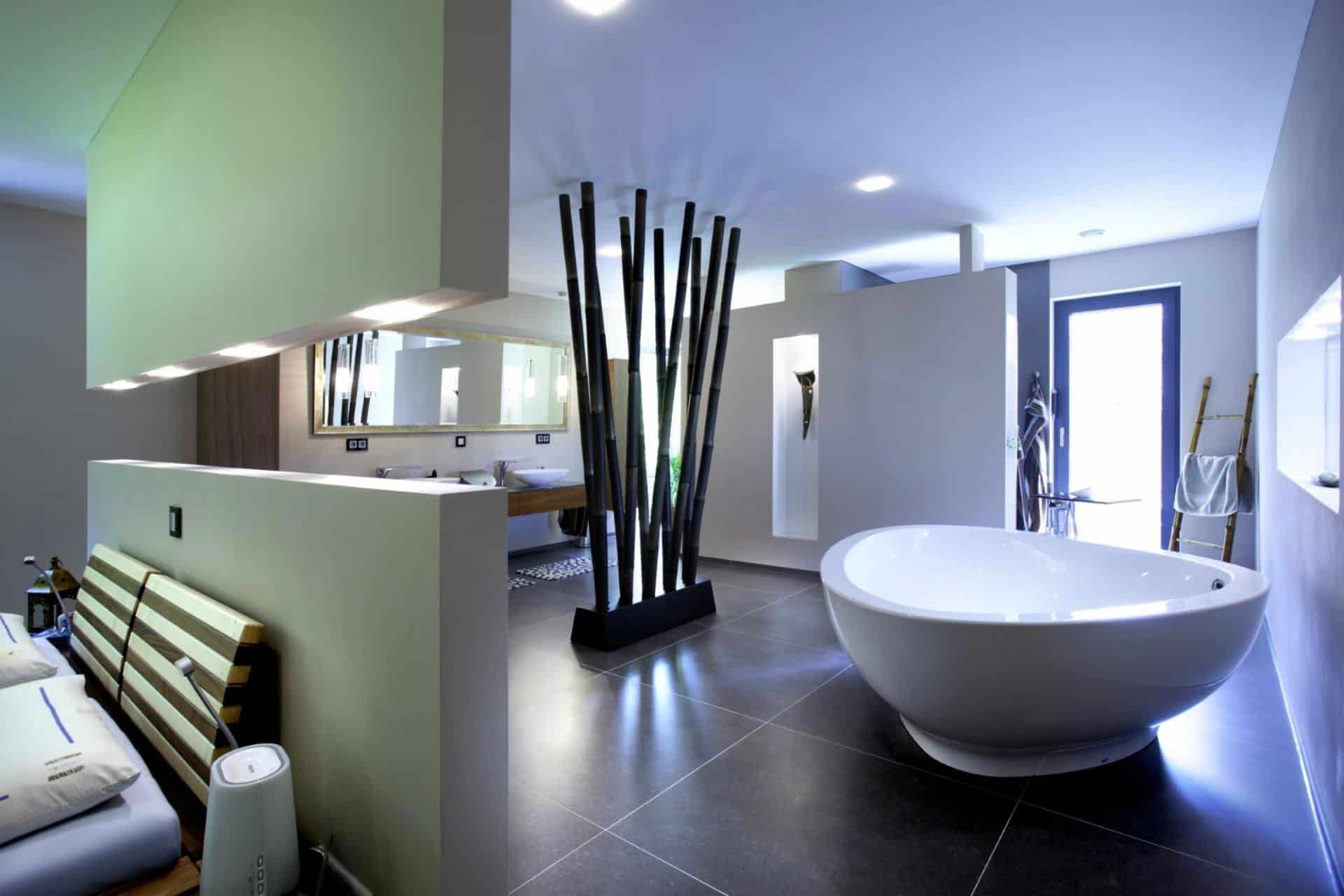 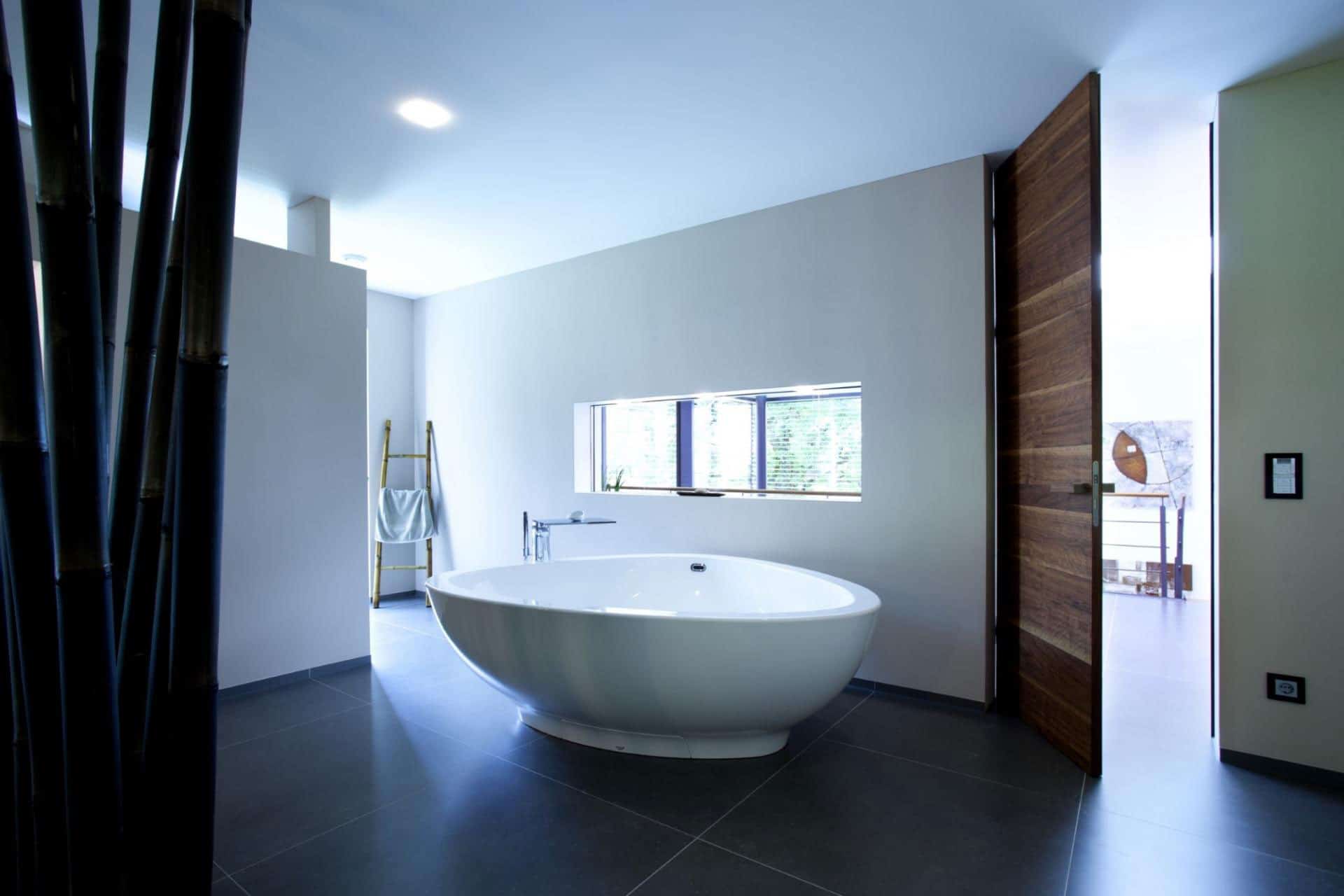 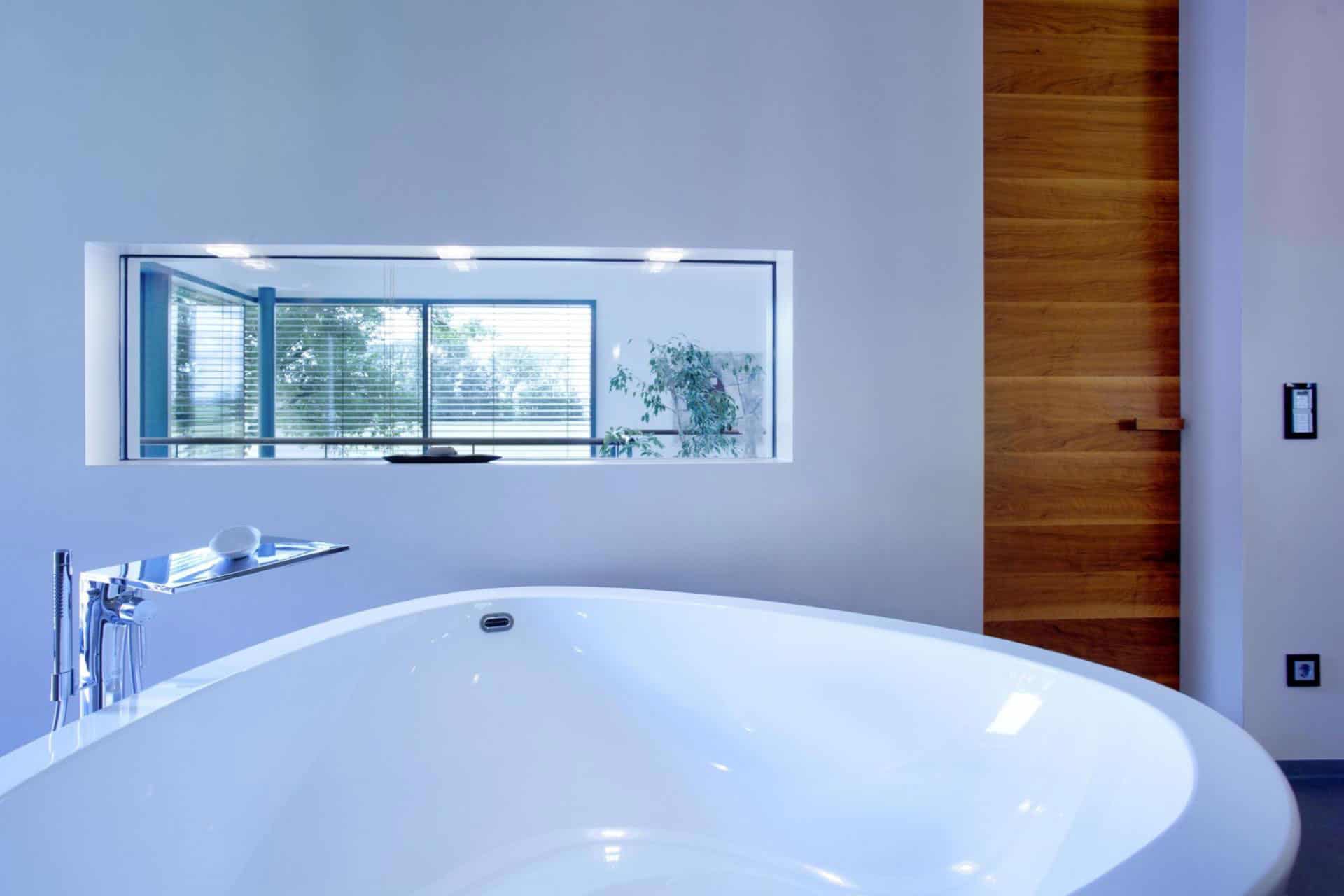 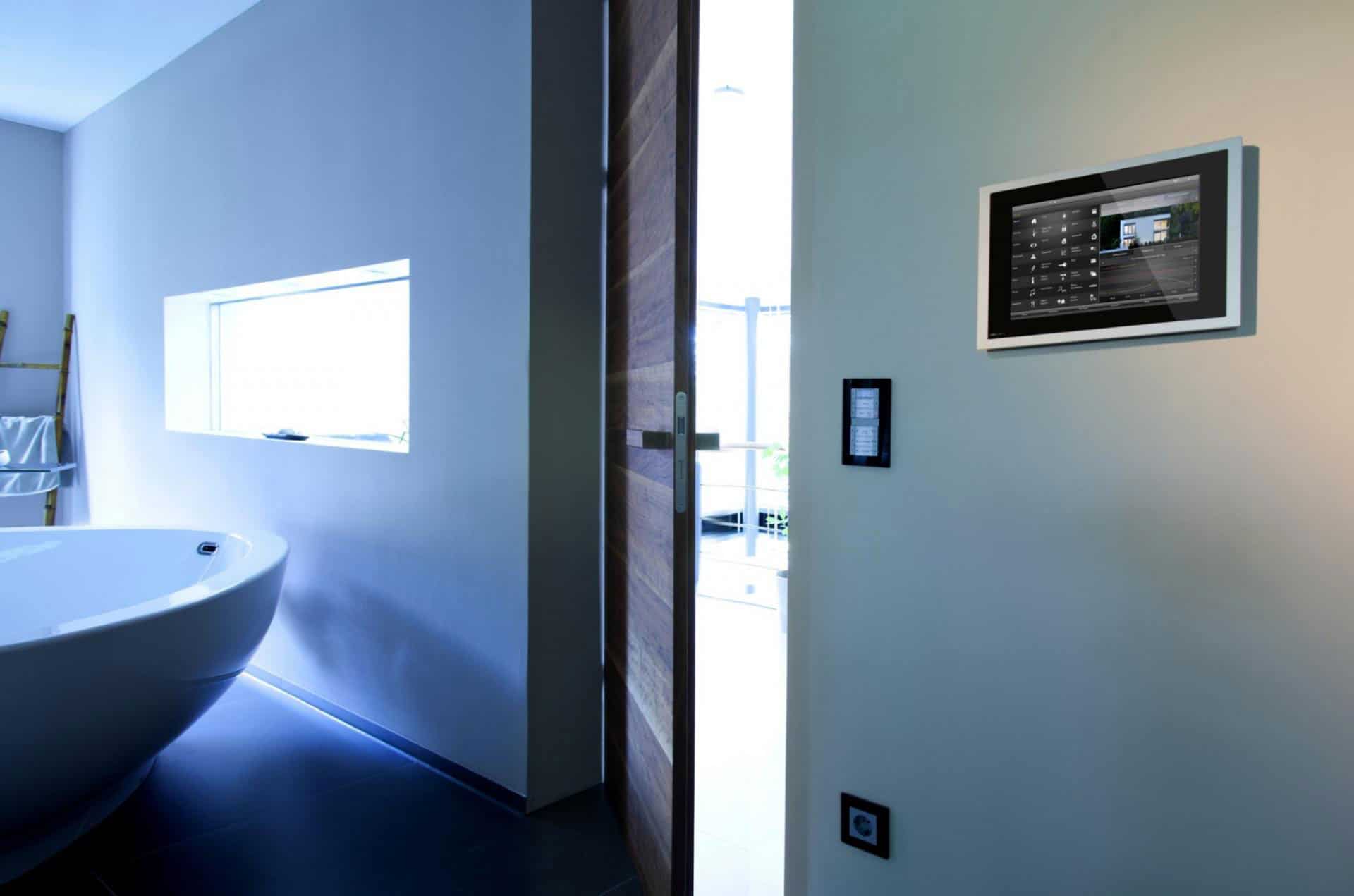 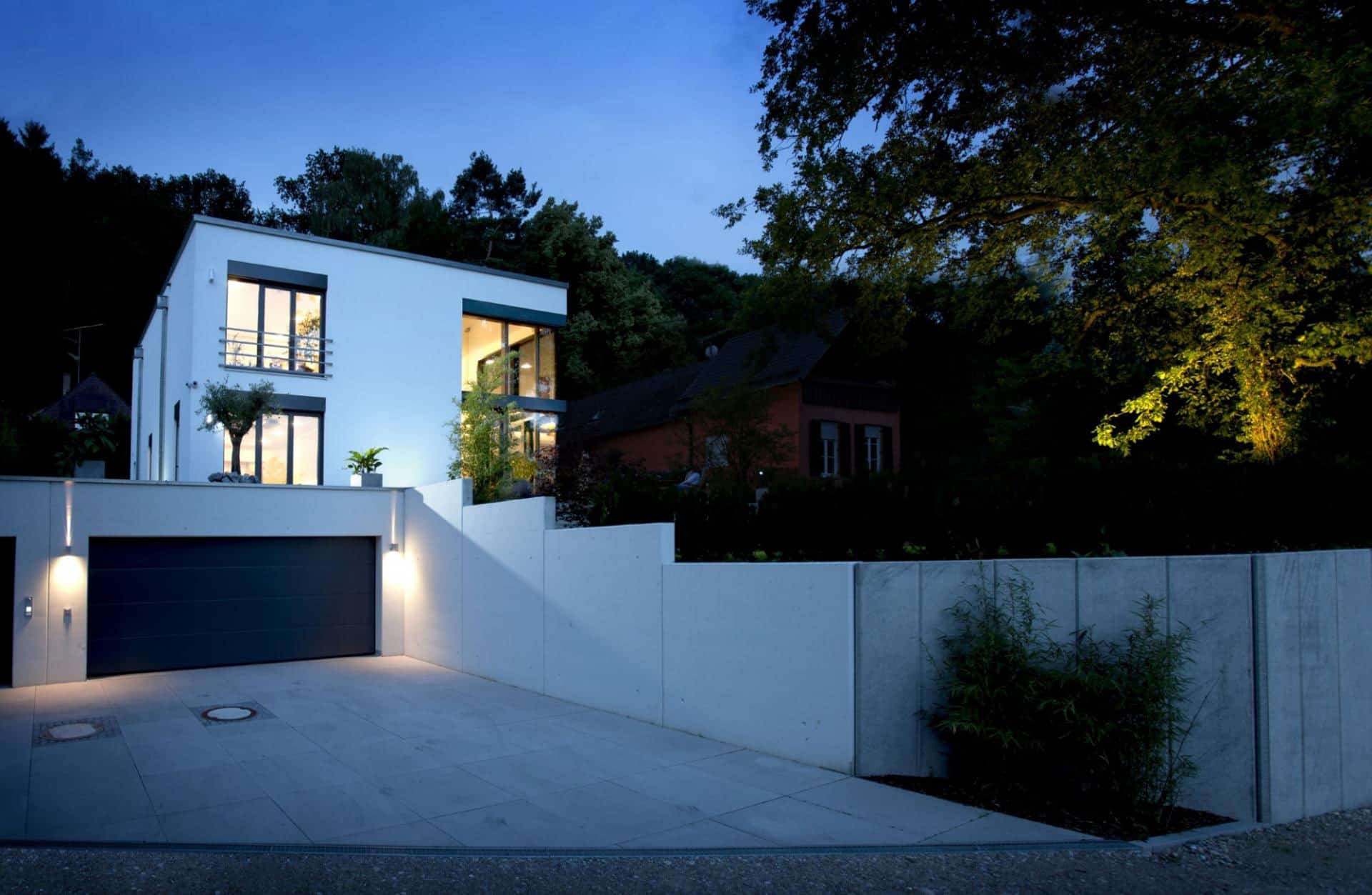 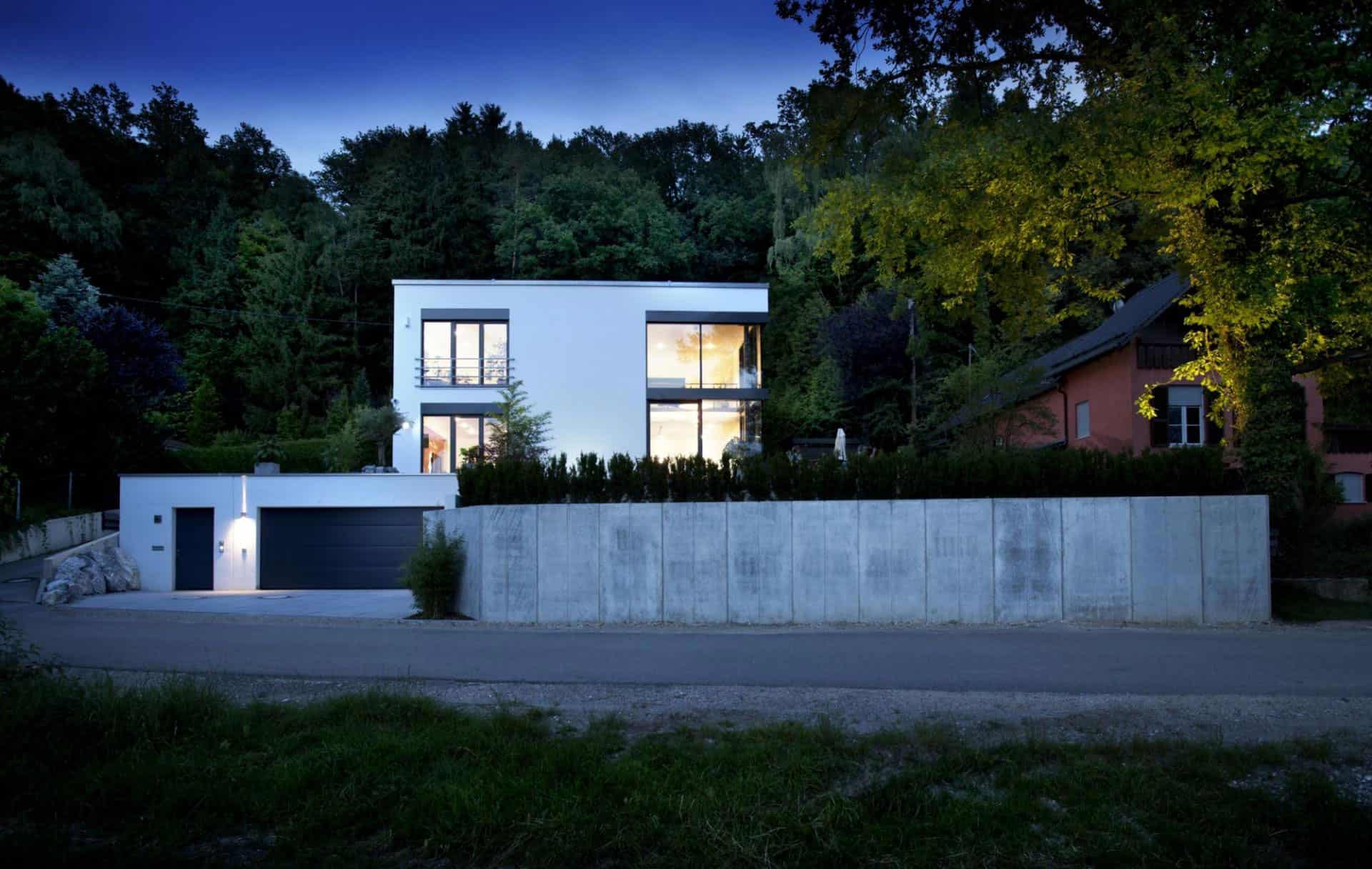 Weisser Wuerfel is a project completed by Gira.

The home is located in Germany.

“Admittedly, the plot is a rarity. It is located directly in front of a nature reserve which guarantees an unobstructed view of nature, and there is a small forest with an old stock of trees in the rear. Despite this, the plot is located in the proximity of a large Bavarian city with motorway access just a few kilometres away.

However, building their dream home there wasn’t that simple for the owners. This was due to the fact that the nearly square building lot is slightly twisted and located surrounded by elongated parcels of land which have been built-up for a long time. The building shape of the residence was based on this distinctive feature: a cube with a flat roof which is fit into an ascending slope. The outdoor areas are staggered, and the spacious terraces pick up on the very linear and rigid structure, which is unusual in this area. Huge windows on the southwestern side open up the cube and allow a great deal of light to enter.

The young owners deliberately wanted to build a modern home and looked for a suitable property for years. They used the wait time in a meaningful way to collect inspirations during their travels and holidays. This included inspirations of houses with attractive architecture, as well as interior design details and accessories. It was important to the working couple that the design of the interior be spacious, airy, open and bright. “Basically, we developed the house from the inside out, and the cube shape was an almost inevitable result,” said the builder. The fact that it is energy-efficient was a further advantage.

Progress was quick once a suitable property had been found. A local construction company realised the house which had already been fully designed in the family’s minds without having to make many changes. They built a 12 x 12 metre (39 x 39 foot) structure made of classic brickwork. The ground floor is basically a single open room, apart from a guest bathroom and a pantry. An open kitchen/living room passes into the living area, which is also open-plan. They are separated only by a fireplace which is accessible from all sides. Without a doubt the home’s centrepiece is the “light tower” facing southwest and stretching up into the upper floor. There is a dominating walnut dining table here, with a magnificent designer chandelier towering above it. The delicate appearance of the sophisticated glass façade was realised with a transom/mullion structure. It allows an unobstructed view far into nature – including of the old oak tree which shelters the new home from one corner of the property.

A curved staircase – also made of walnut – leads to the upper floor which houses only bedrooms and bathroom in addition to a guest room. This area also has a full view of the natural surroundings. “A sense of space means quality of life” is the concept of the builders. It was consciously designed as a contrast to their prior living situation where although it had been large, the rooms had been small, low, and tight. Their new house is the complete opposite, and the ceiling height of nearly 3 metres makes a significant contribution here. The owners planned even more, saying, “We wanted to eliminate the separation between the indoors and outdoors as much as possible. Therefore, we realised large windows. Also, the balconies on the southern and western side lead out into the garden which is adjacent to the nature reserve, divided only by a narrow street.” In the winter, the heat generated reduces energy consumption measurably. In contrast, the house is rather sealed off towards the other two directions, which is also an energy-efficient solution.

In addition to the engineering room and home gym, there is a large garage in the cellar which opens up to the street in front of the house at ground level.

The design signature of the builders is perceptible in each detail because the long pre-planning phase allowed time for their ideas to mature. The floor-to-ceiling doors are also walnut, while all of the floors on the two residential levels are covered with large stoneware tiles which shimmer in matt anthracite. The counter and free-standing kitchen island pick up on this material and colour tone. The white walls throughout reflect light into the interior of the house. Only a raspberry-coloured colour accent in the living room relaxes this severe design.

In addition to the structure, the technical inner working of the house is also modern. The fact that the builder is a fan of technology reinforced his wishes: He explained, “I wanted to have both trend-setting and future-fit building technology in my home.” He also obtained a great deal of outside stimulation and information in this context – from magazines, as well as from the Internet. His “initial contact” with Gira was also within the virtual world. The home owner was immediately fascinated by the uniform and visually appealing Gira switches – the Gira Esprit series in black glass was installed through the entire house. He considered the possibilities for building control even more interesting because they make living more convenient, secure, and energy-efficient today. The basis for this is the powerful KNX system which links all the electrical components in the home with one another. The intelligent central control unit behind this is the Gira HomeServer, where all of the information merges and is evaluated.

An experienced professional was needed to realise a system like this – the builder was also able to find one of those on the Gira website. The solution provider in the field of modern building control runs a competence network of KNX experts, called System Integrators. The search function filtered a nearby contact person out of its comprehensive country-wide network: Anton Hieber in Schwabmünchen. The initial consultation was held in a relaxed atmosphere in his Gira Revox Studio. The System Integrator was henceforth closely included in the planning process. It was his job to realise the builder’s wishes for building technology and integrate them into a uniform, easy-to-operate system.

Security aspects were paramount in this regard. The alarm system is integrated in the KNX system while several IP cameras monitor the outdoor area and supply the images to the two Gira Control 19 Client operating panels in the living area and bedroom. The entrance area below in front of the house and the building’s rear door are also monitored with video cameras – the Gira door stations with wide-angle cameras deliver images of the areas which cannot be seen from inside the home. The Gira DCS-IP-gateway transfers the images from all the cameras to the operating panels, thus making these panels expanded home stations for door communication.

The Gira door stations installed outdoors are equipped with Keyless In functions. The Gira Keyless In Fingerprint controls access using the unique biometric properties of the human fingerprint. It acts as an electronic key, but with the advantage that it’s always available. It can’t be lost, misplaced, forgotten, stolen or copied. The home owners are particularly fascinated by the fact that different fingers can control different functions. The door communication should also be installed on mobile end devices such as iPhones and iPads in several months. Anton Hieber will integrate the new Skype expansion of the Gira DCS-IP-gateway for this purpose.

The letterbox in front of the house is also monitored. It transmits a message when mail is actually delivered and indicates exactly when that occurred. In addition, there is a central fire alarm, plus a separate Gira smoke detector in each room. The electrical control of several windows that cannot be accessed by hand is a convenient function. Security aspects also play a role here: special contacts display on the operating panels whether windows and doors are still open when the family leaves the house.

For the owners, however, modern living also meant living in a power-saving and healthy way. For example, the heating – a gas-fired boiler – is integrated in the KNX system in the form of single-room control including a comparison of target and actual figures. A ventilation system provides fresh air for the entire indoor area. It has eight adjustable levels and controls e.g. the temperature of the supply air. Anton Hieber programmed the special fireplace switching for the open fireplace. The blinds are equipped with automatic functions to shade the house ideally in the summer. They react even when the family is not home. A weather station on the roof safeguards the house against storms and hail, and the blinds are raised automatically in case of emergency. The weather station can also call up forecasts to be processed by the HomeServer from the Internet.

The lighting is mainly realised with LEDS, except for the chandelier in the light tower. This is also a construction measure to conserve energy. A photovoltaic system on the roof generates power for the home – and its current values can also be viewed on the operating panels. In addition, the entire building control can be monitored and controlled while away using an iPhone or iPad. “It is an ideal solution for owners who are away often,” said System Integrator Anton Hieber.”