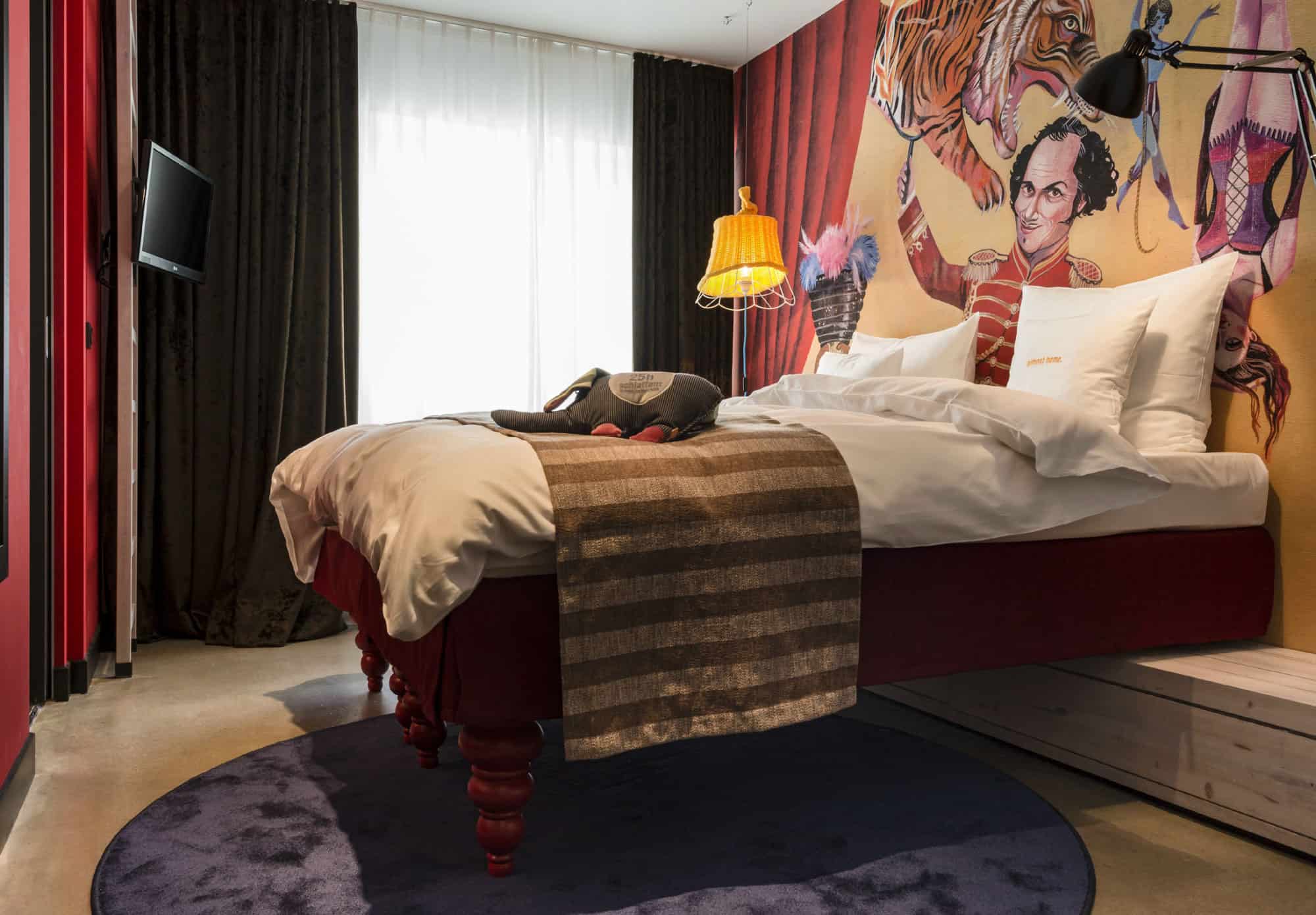 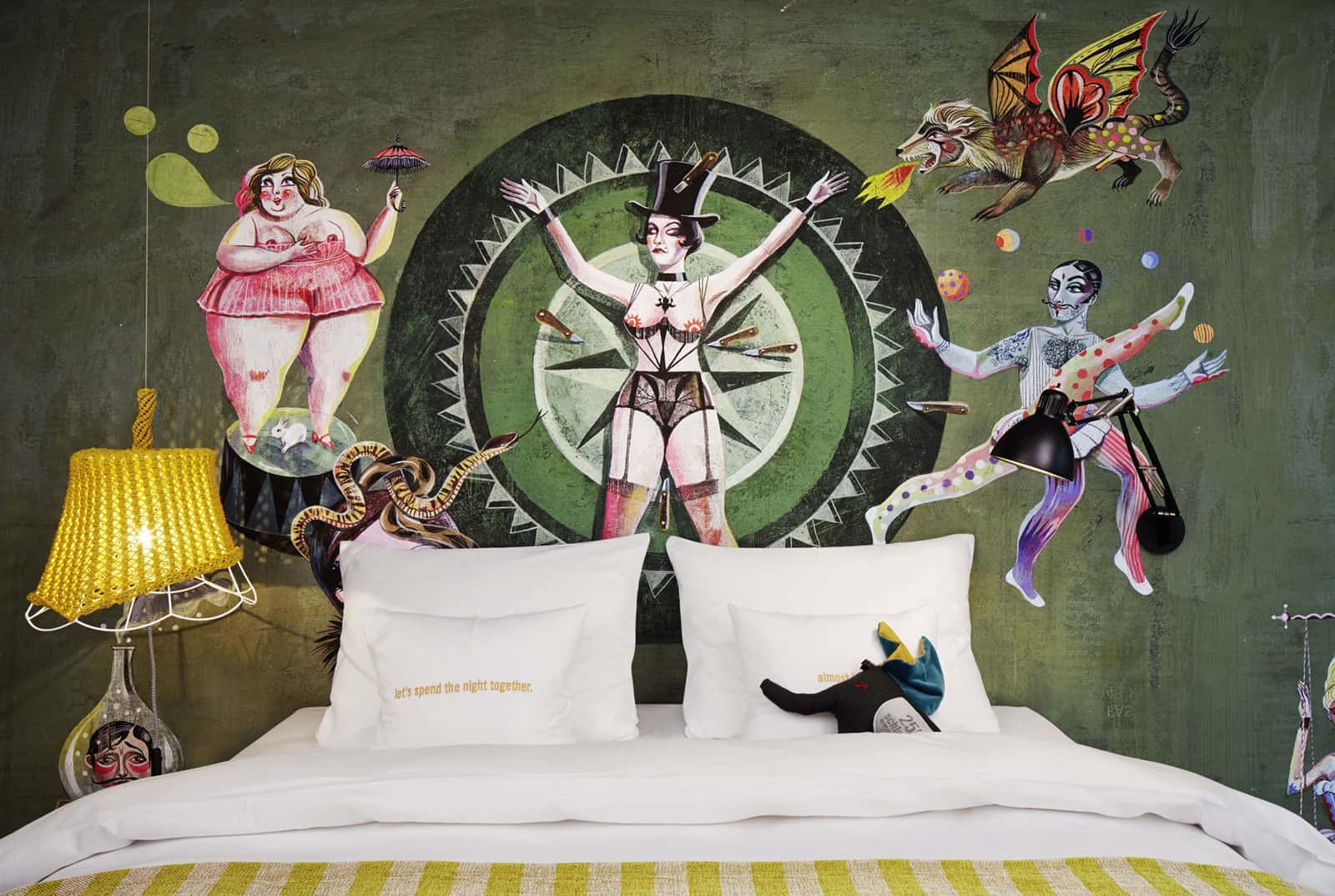 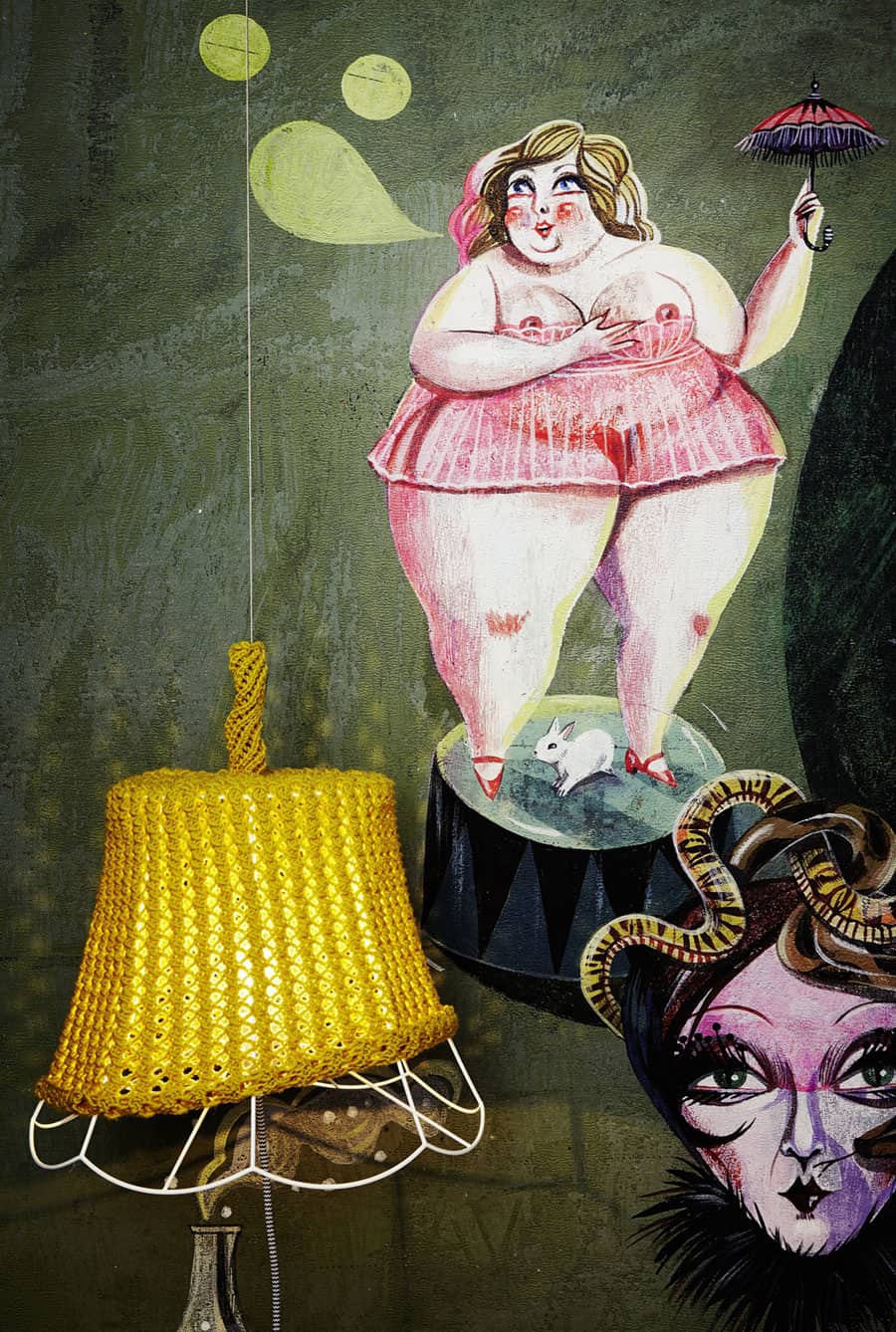 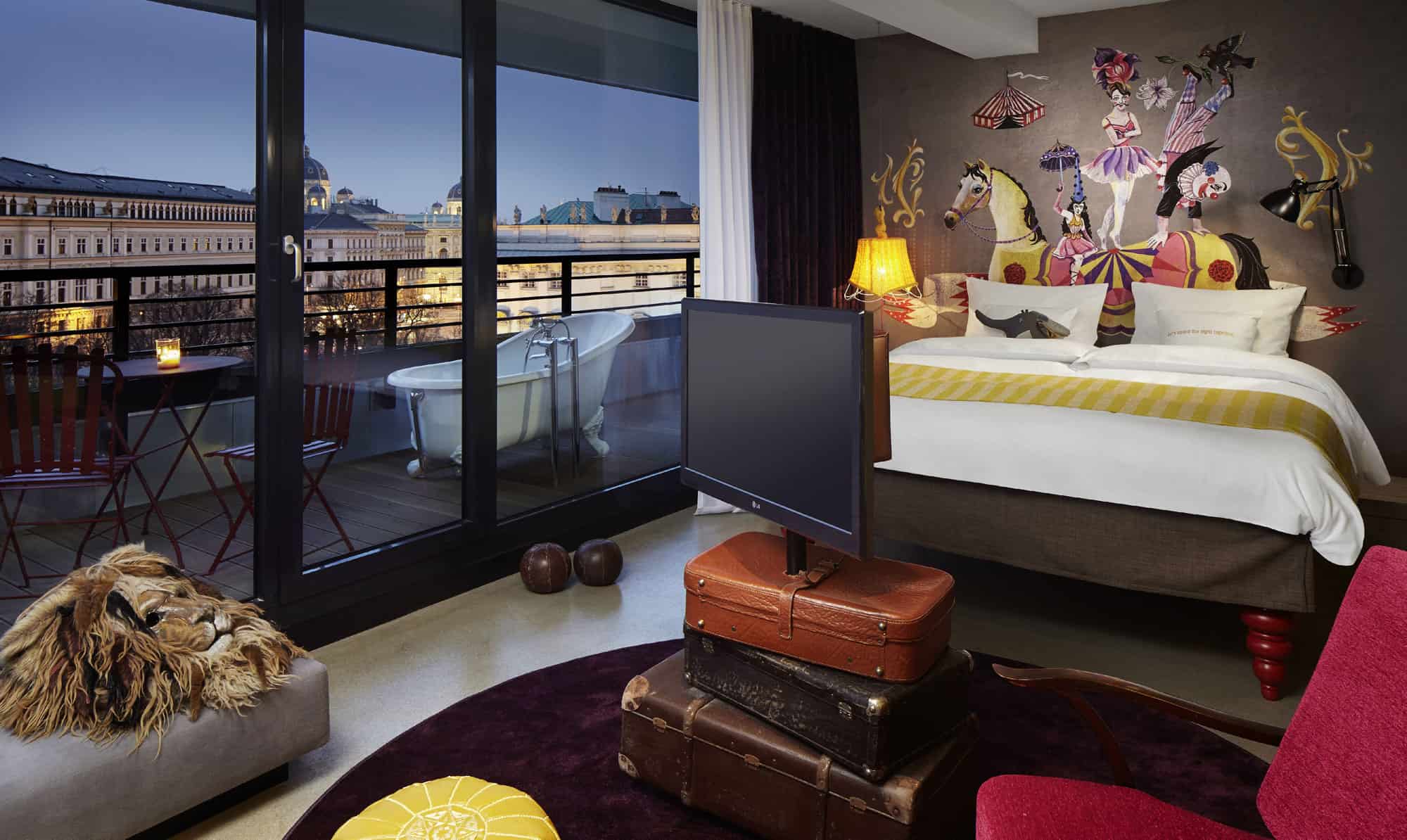 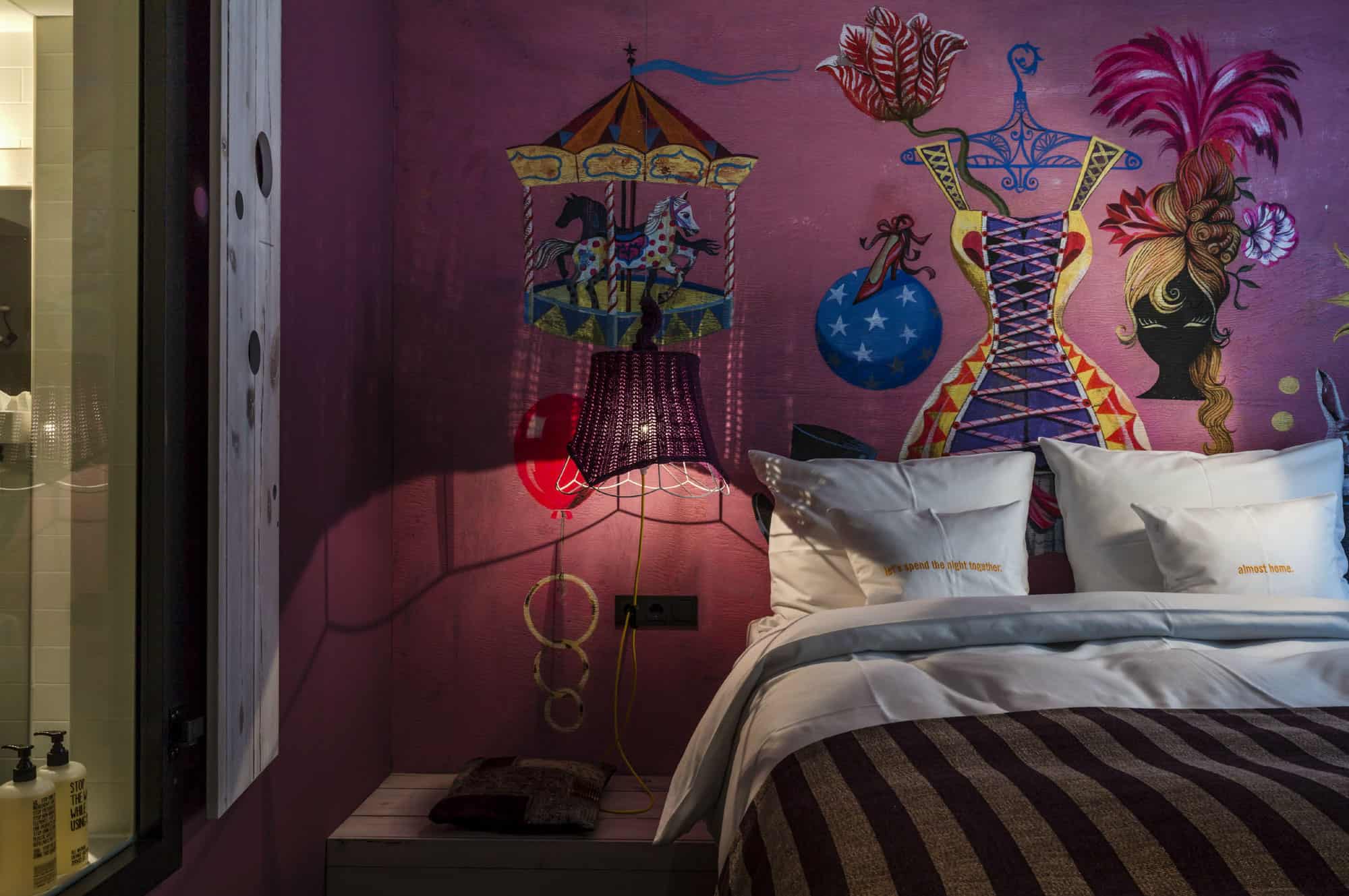 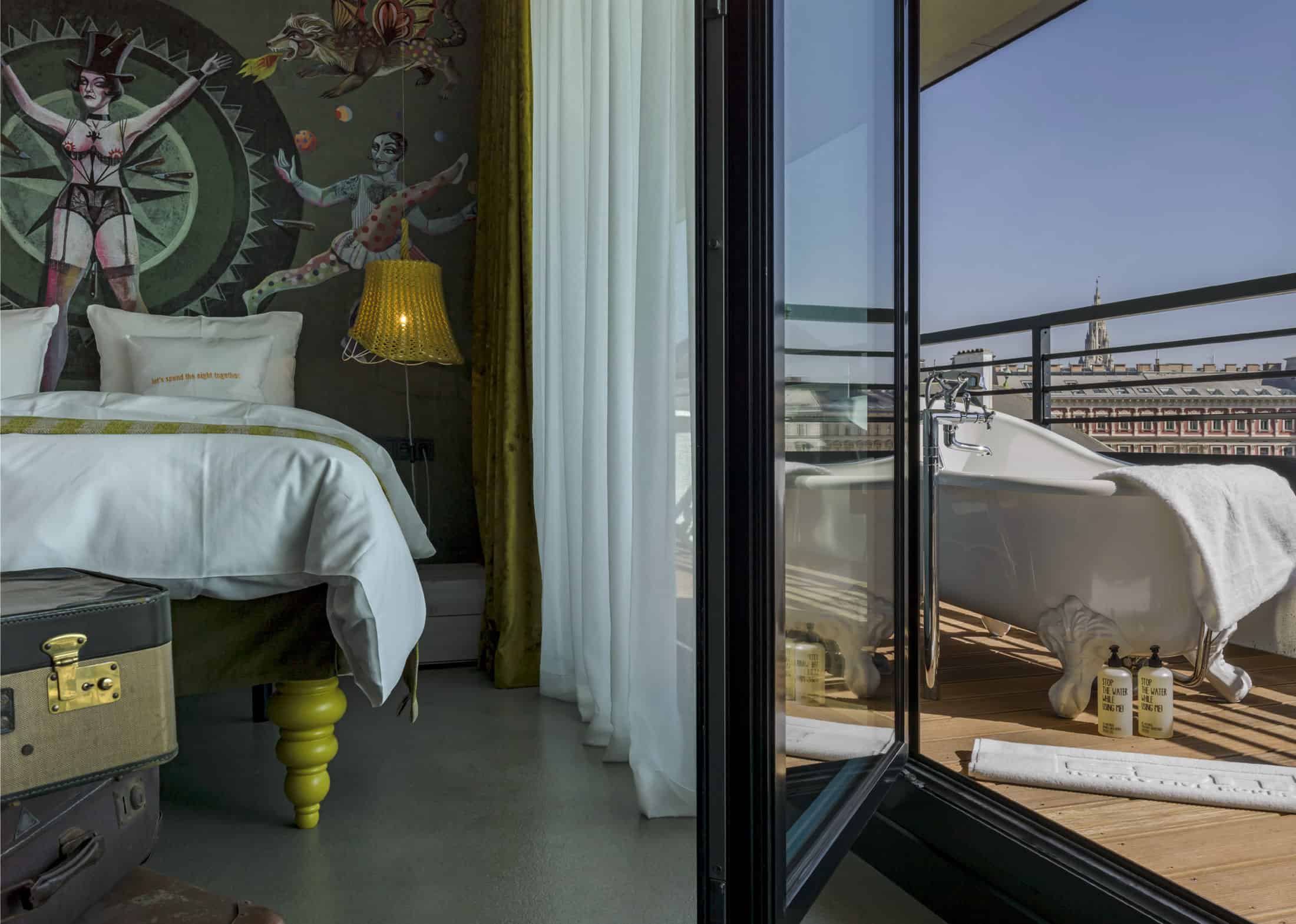 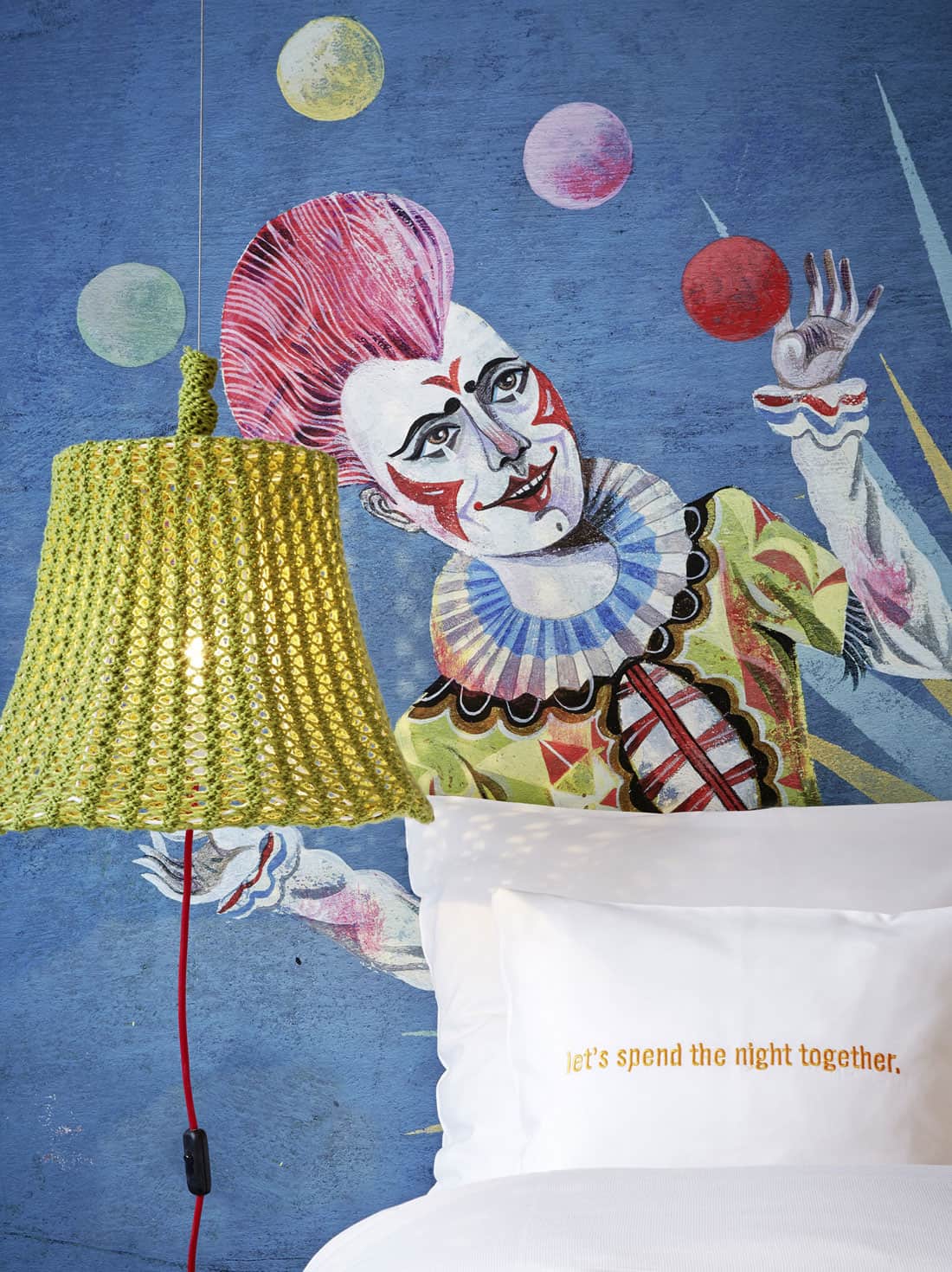 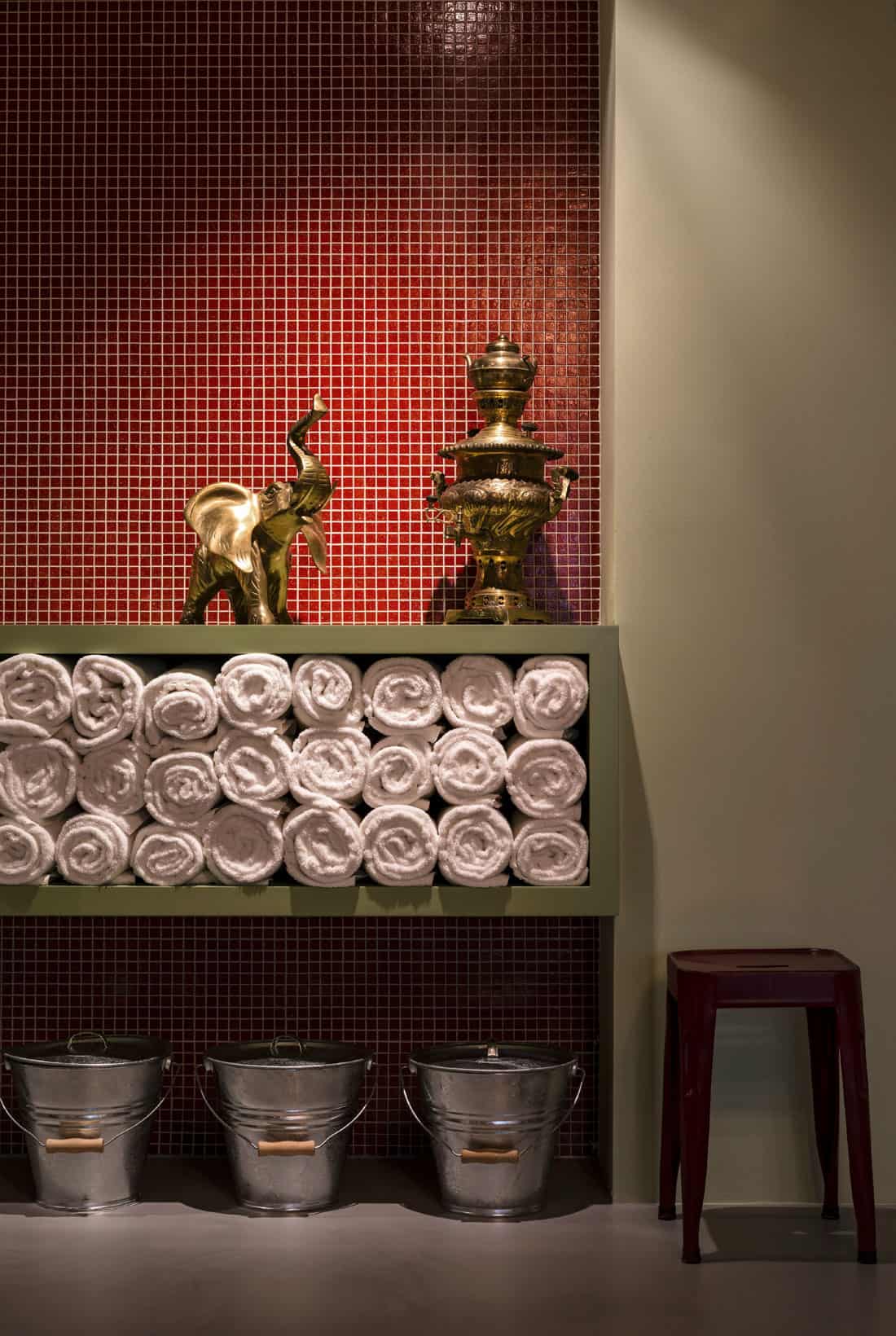 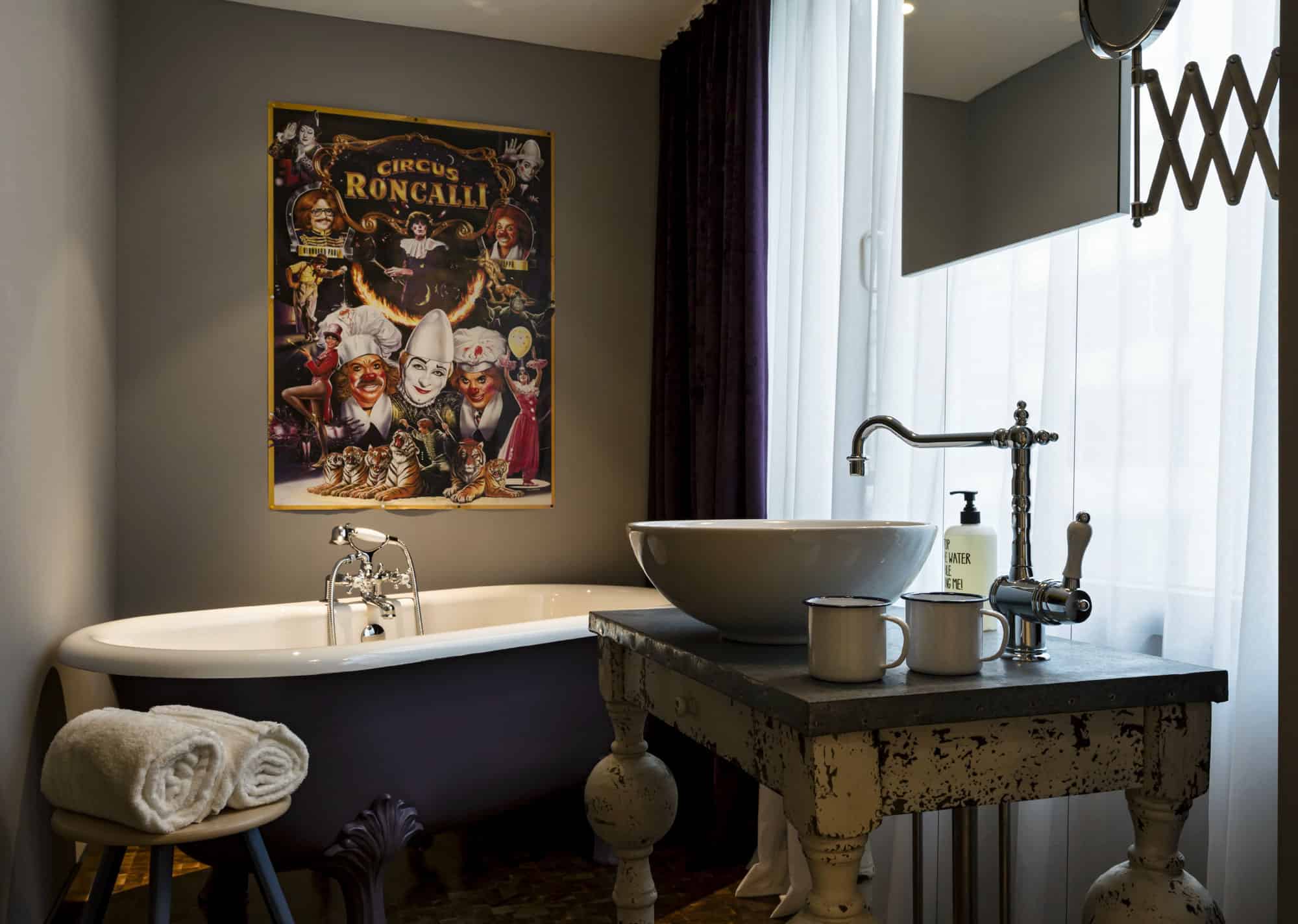 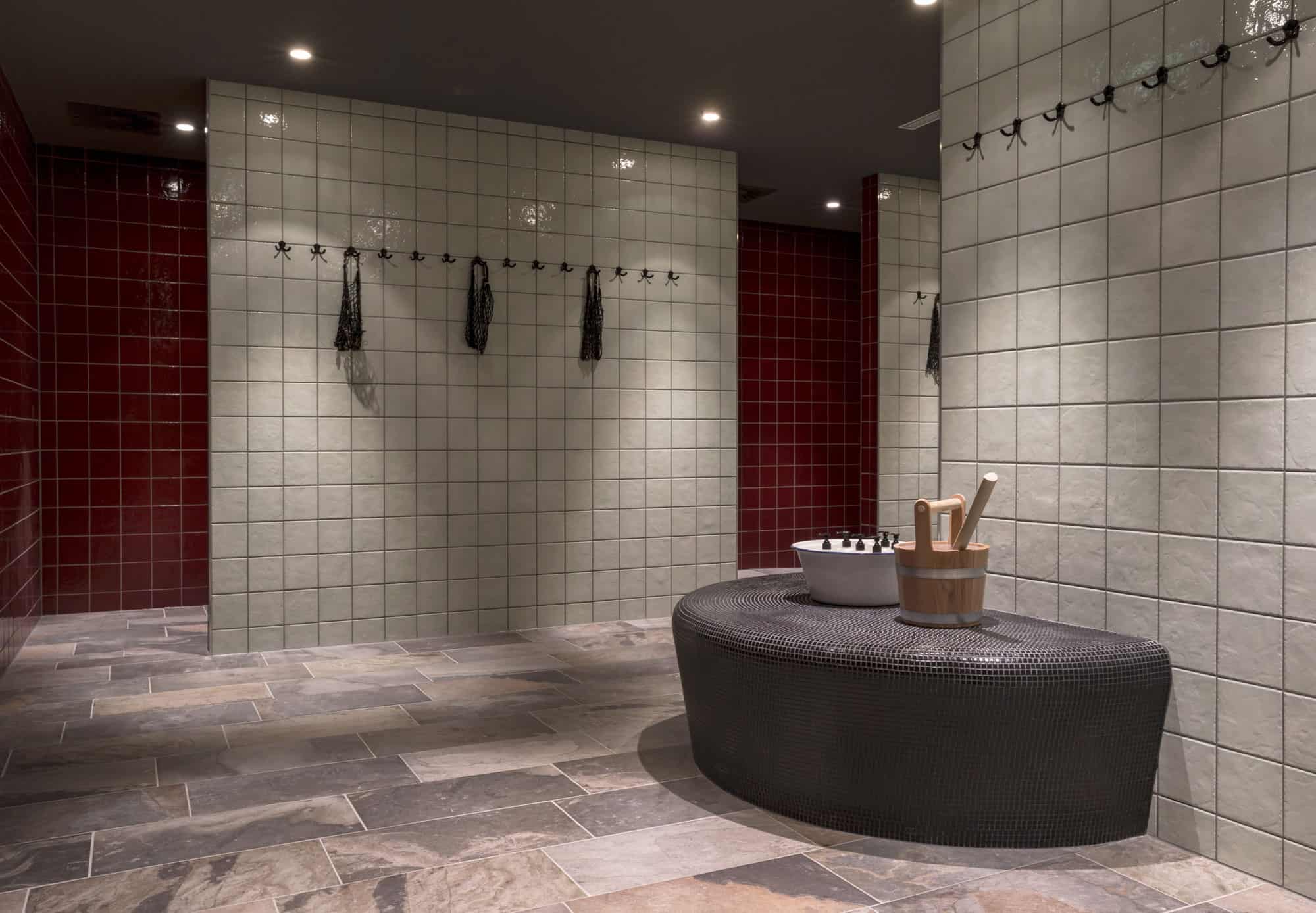 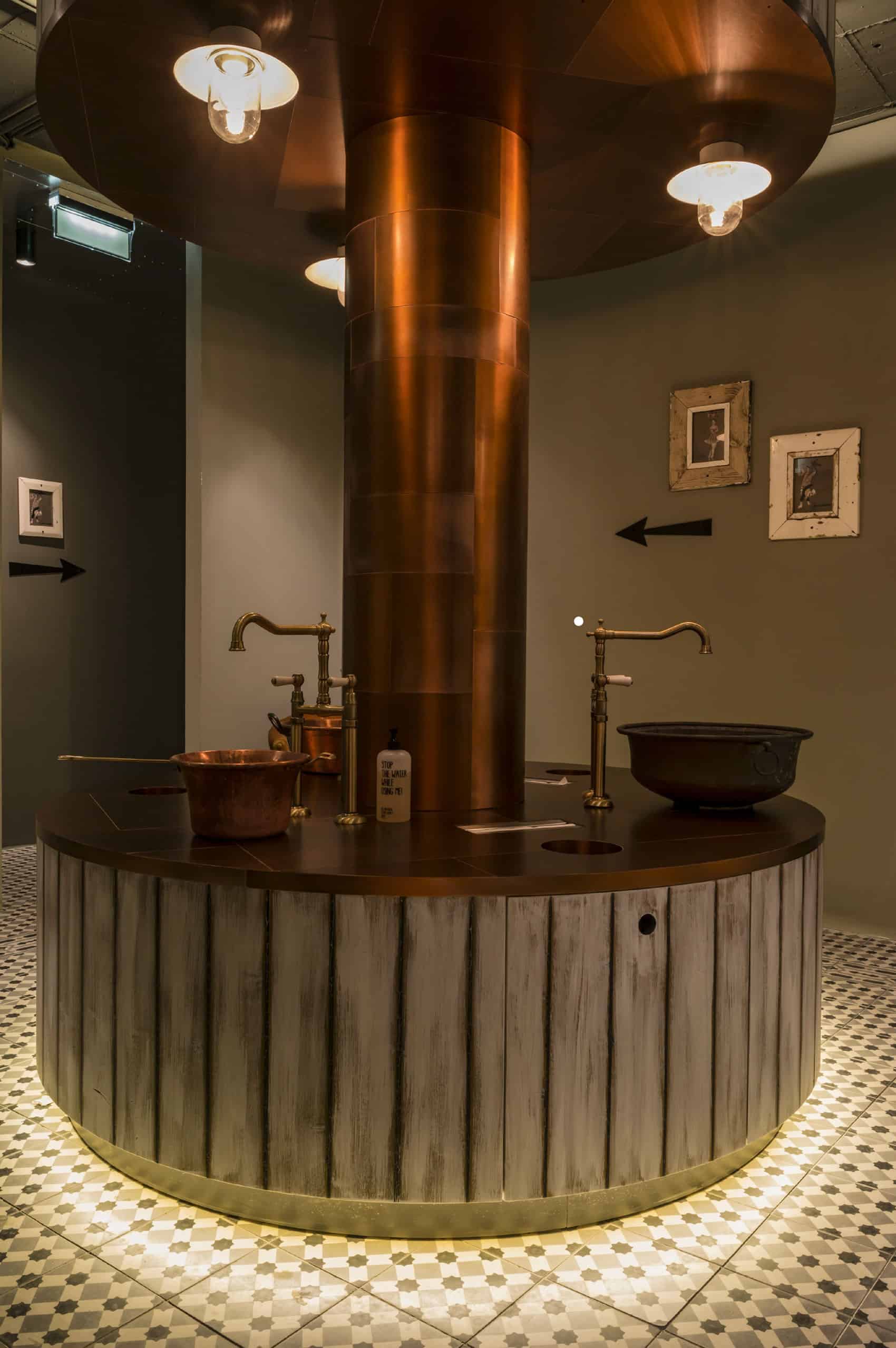 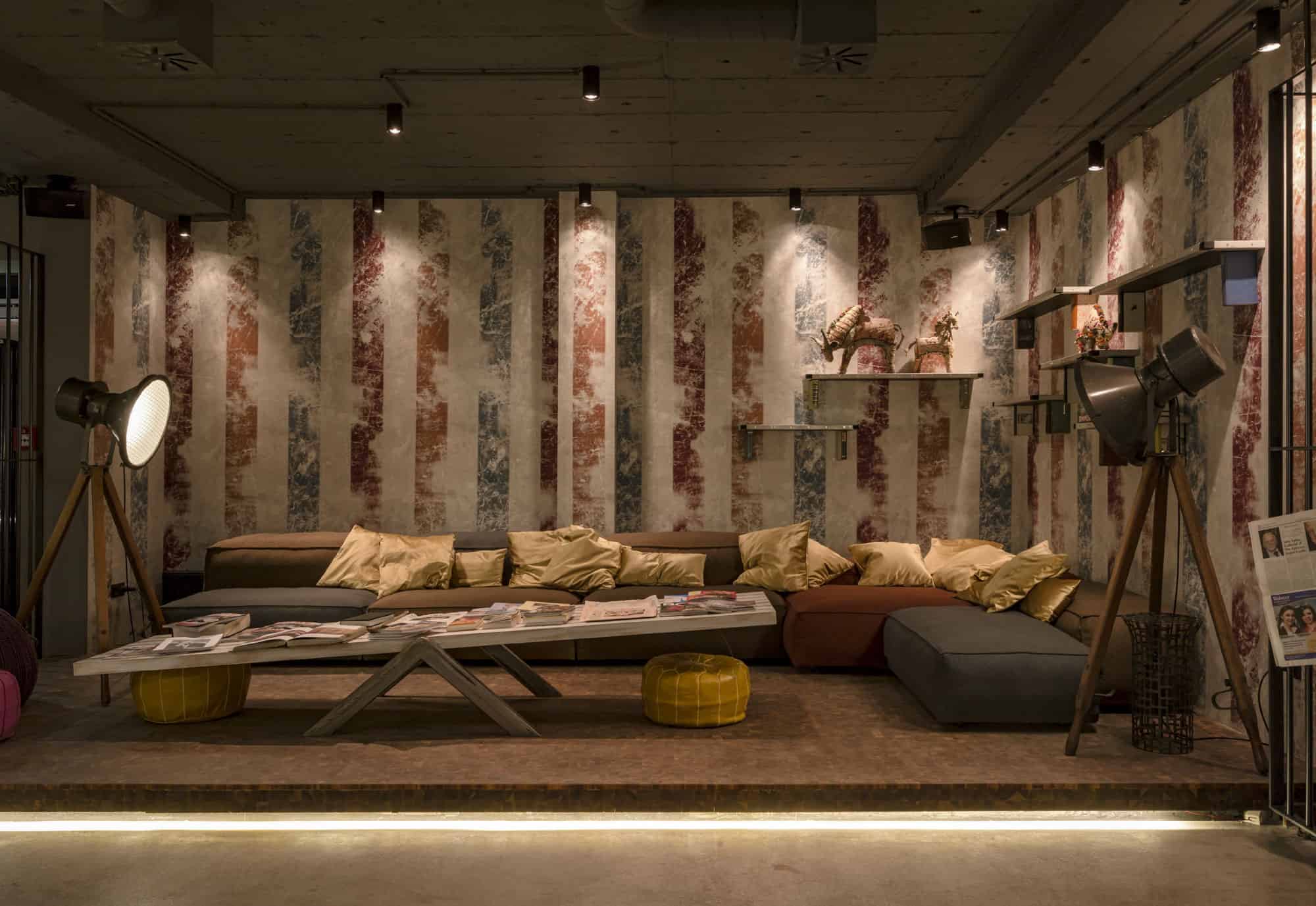 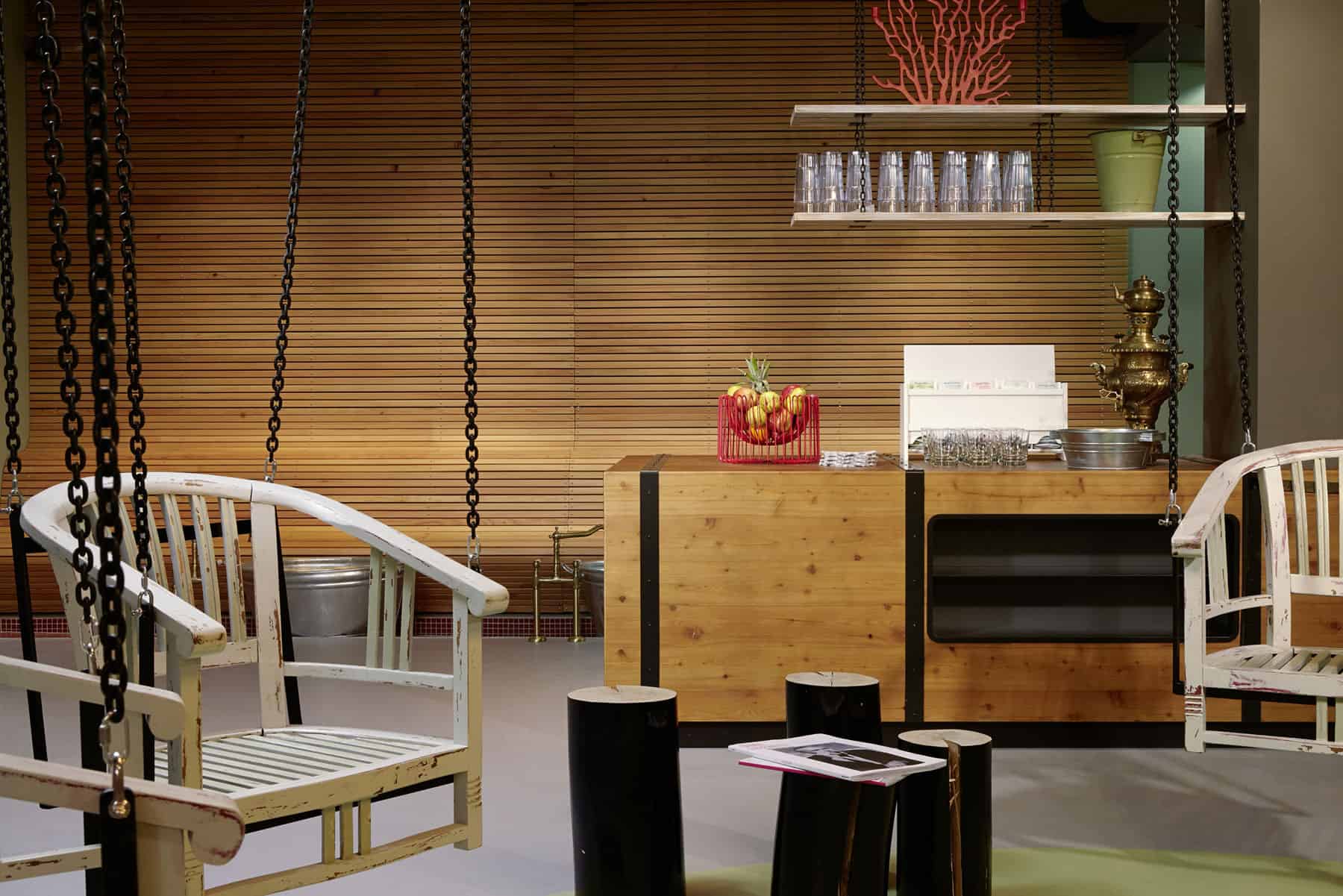 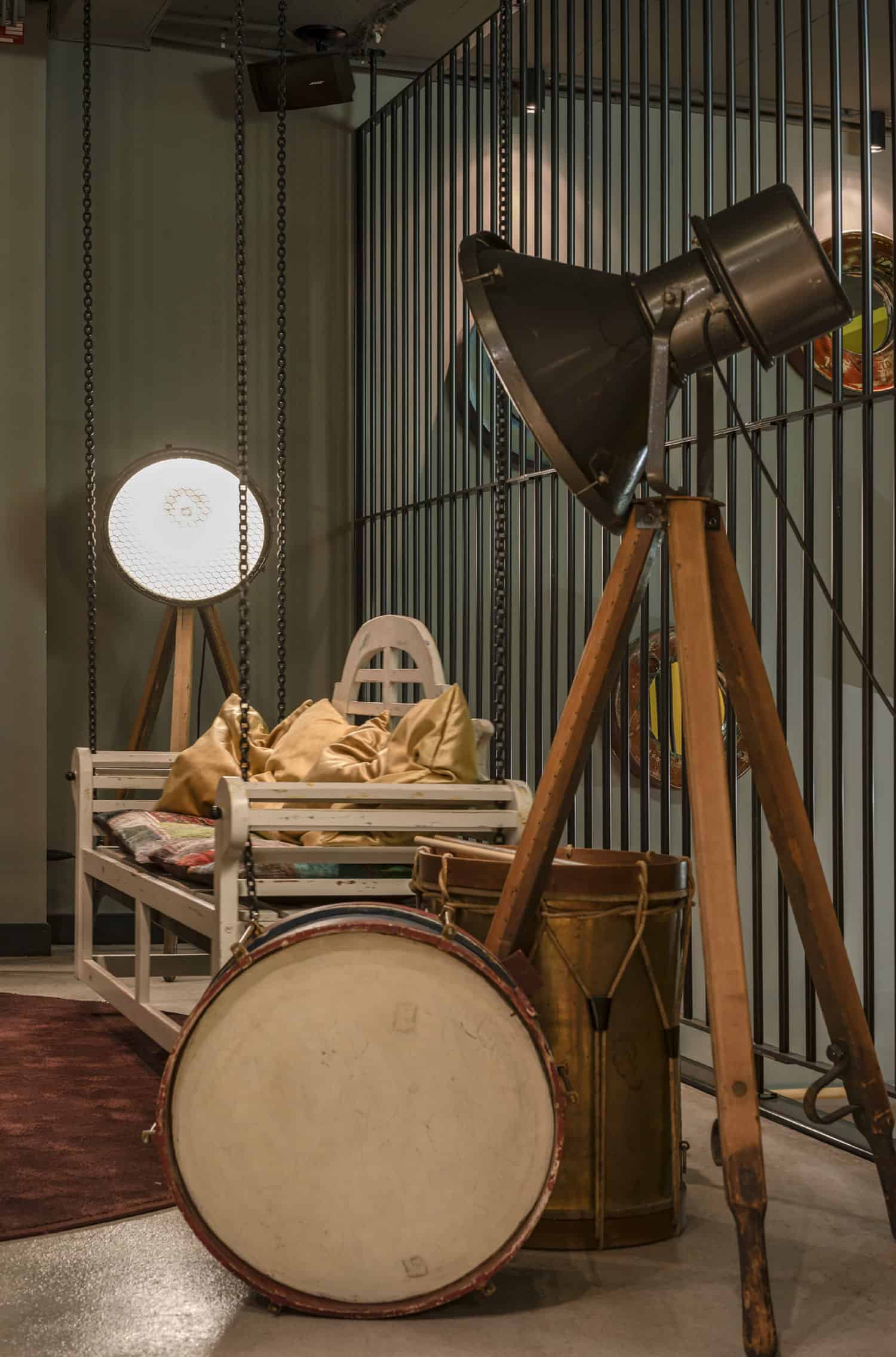 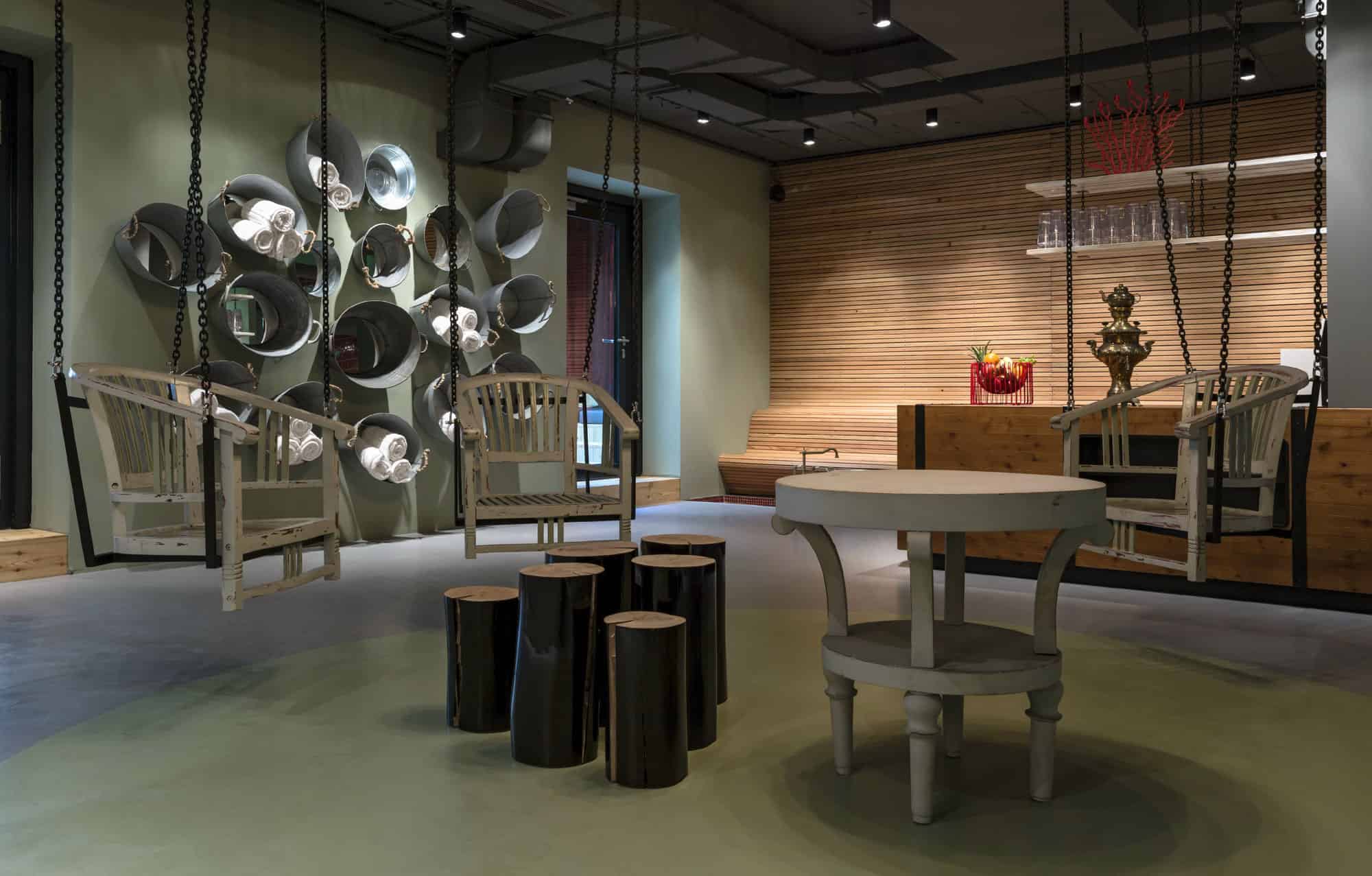 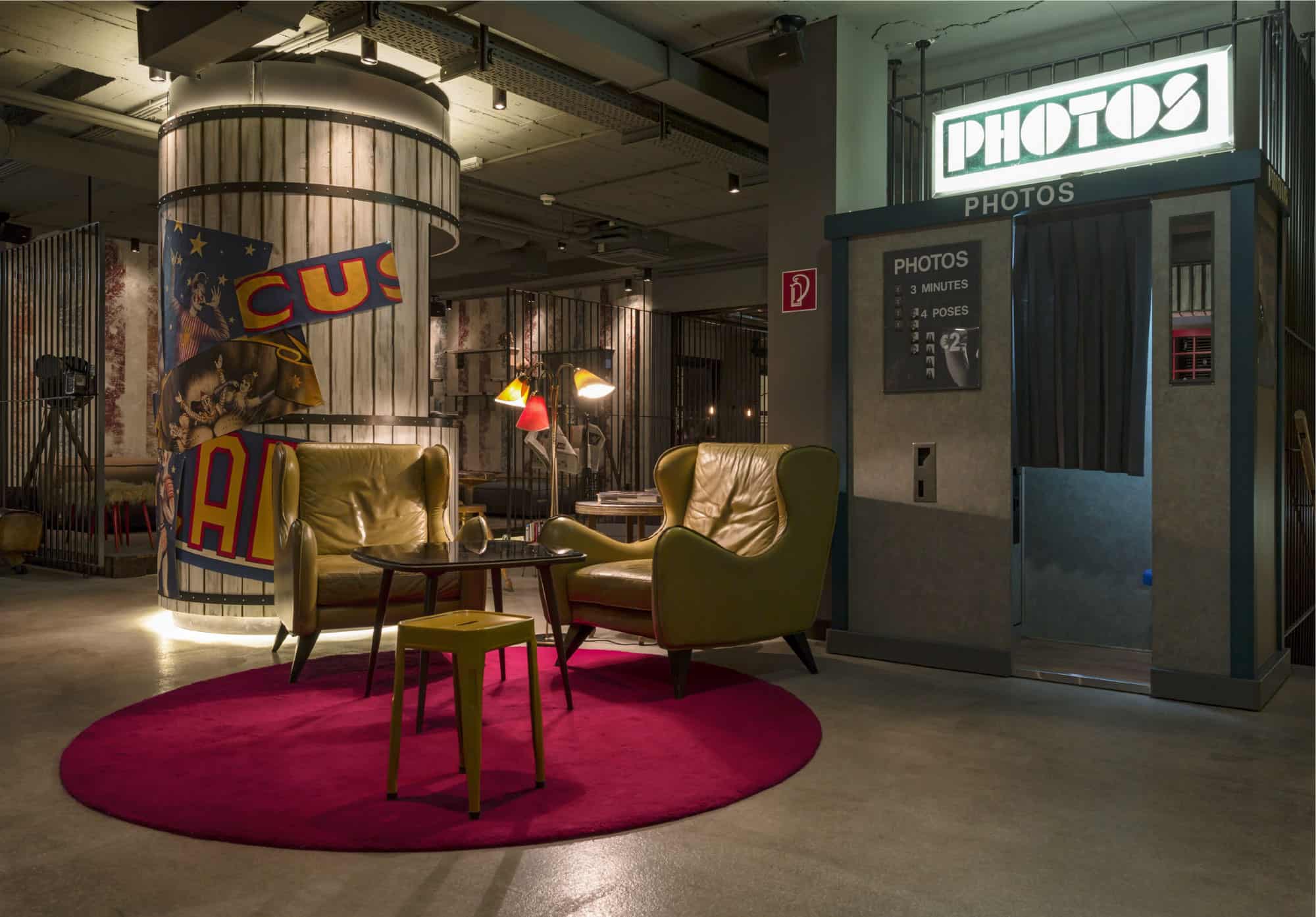 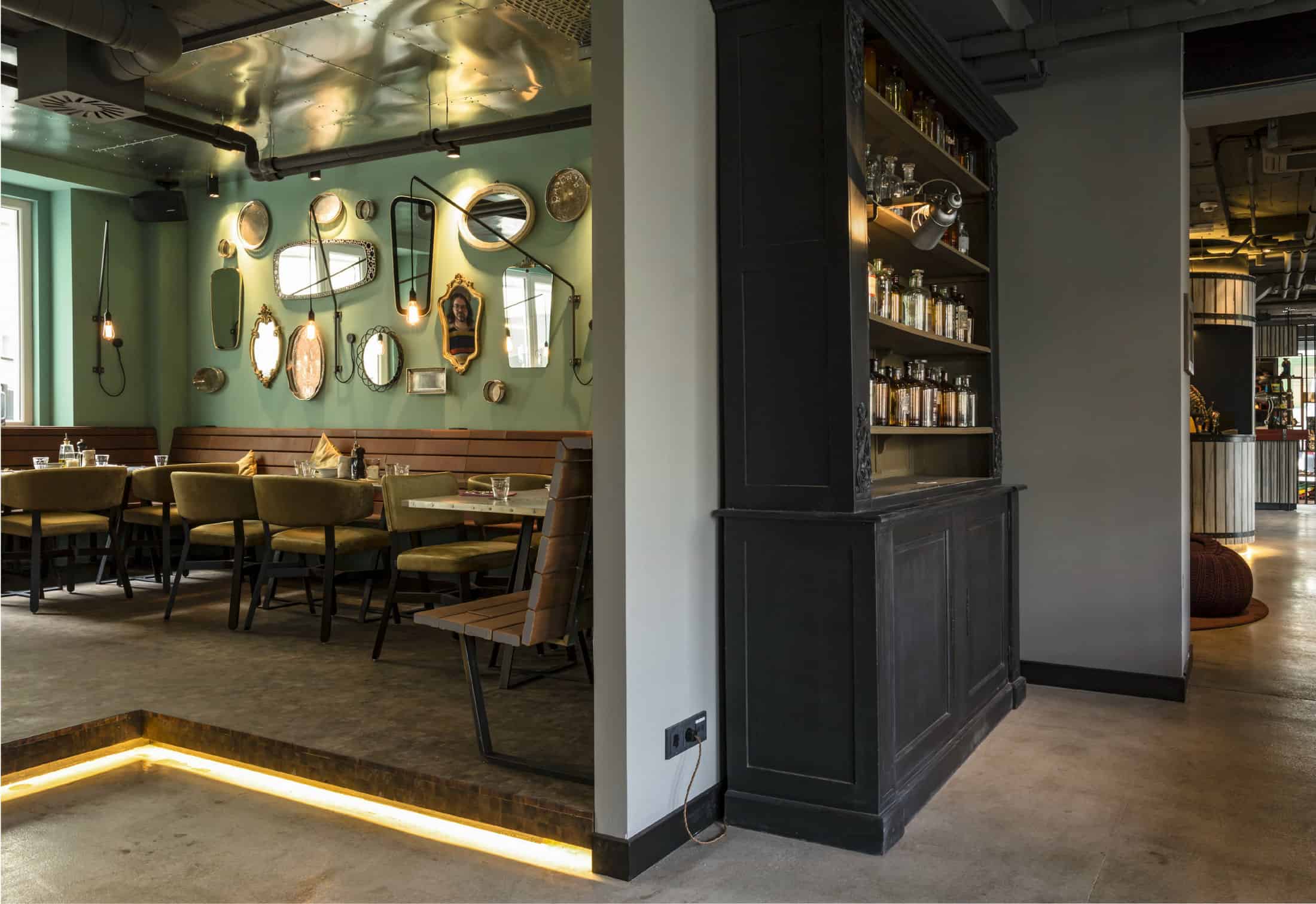 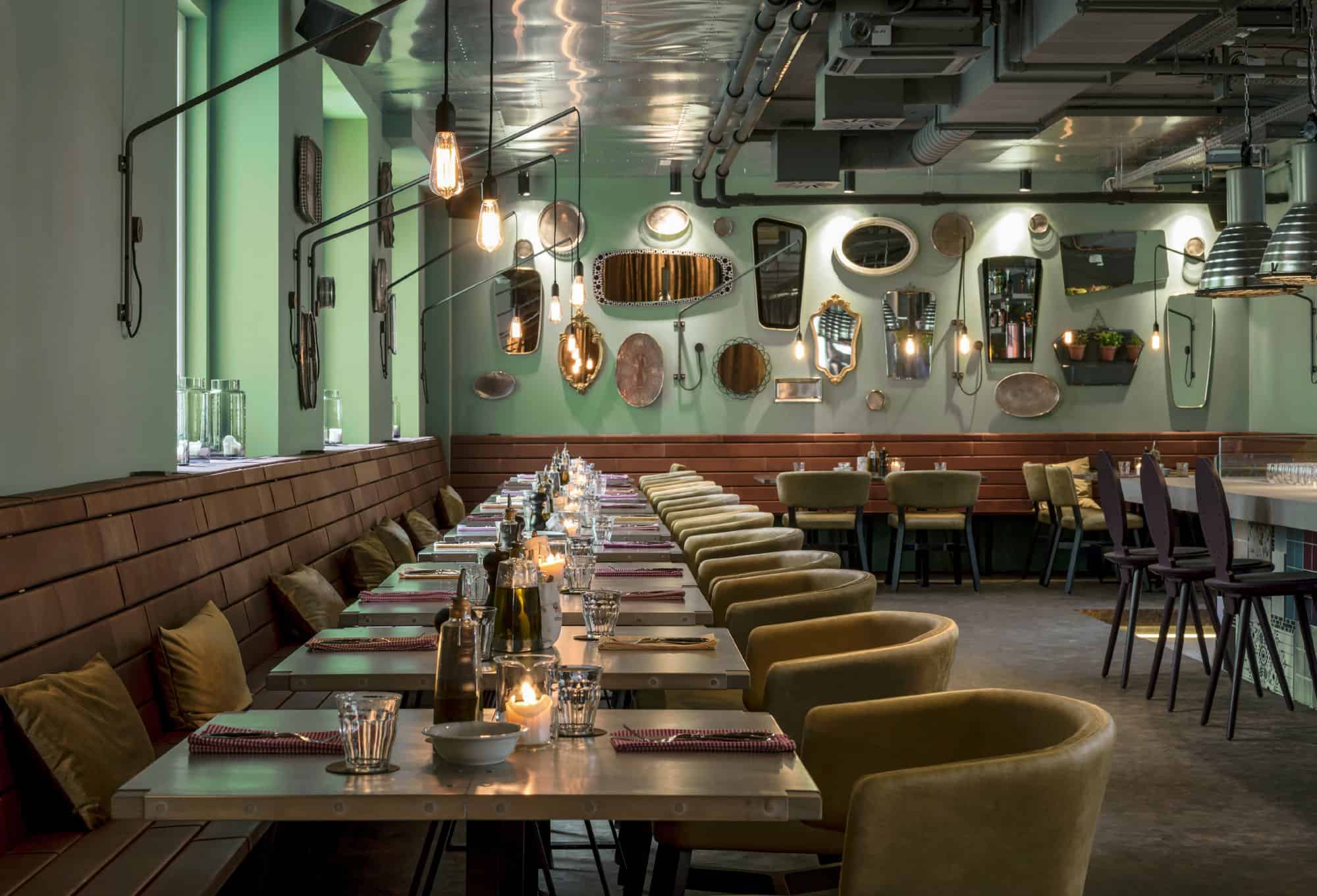 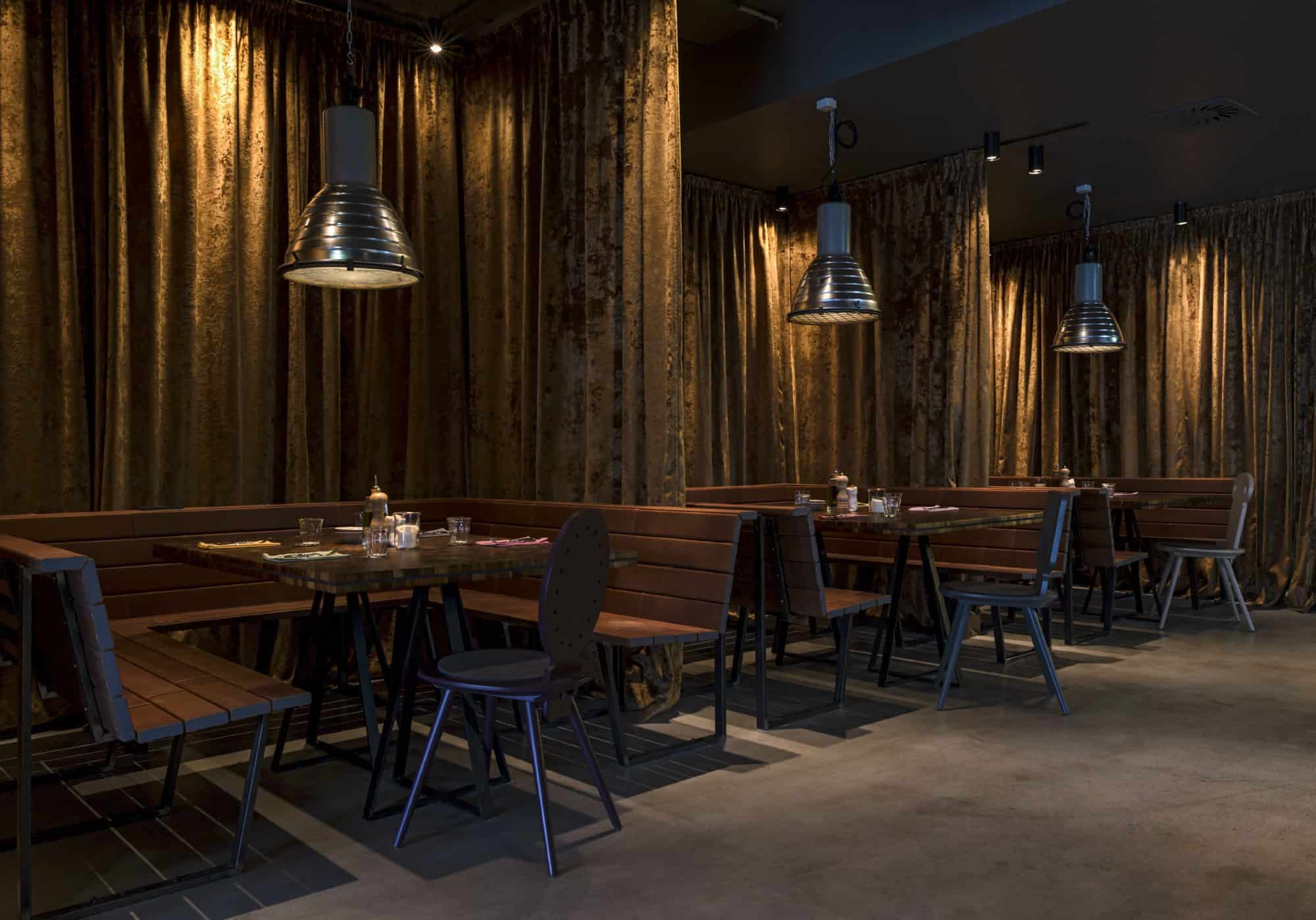 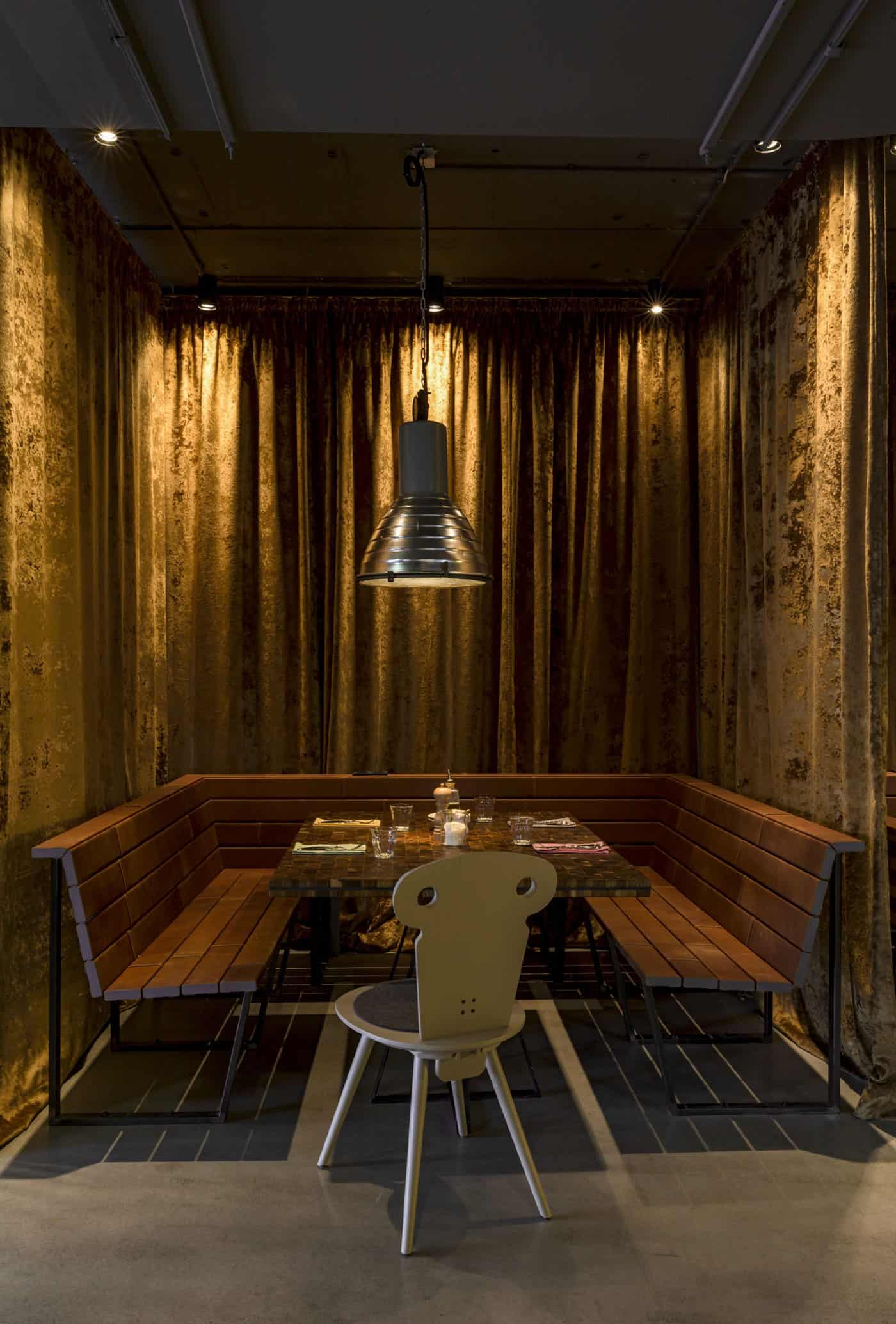 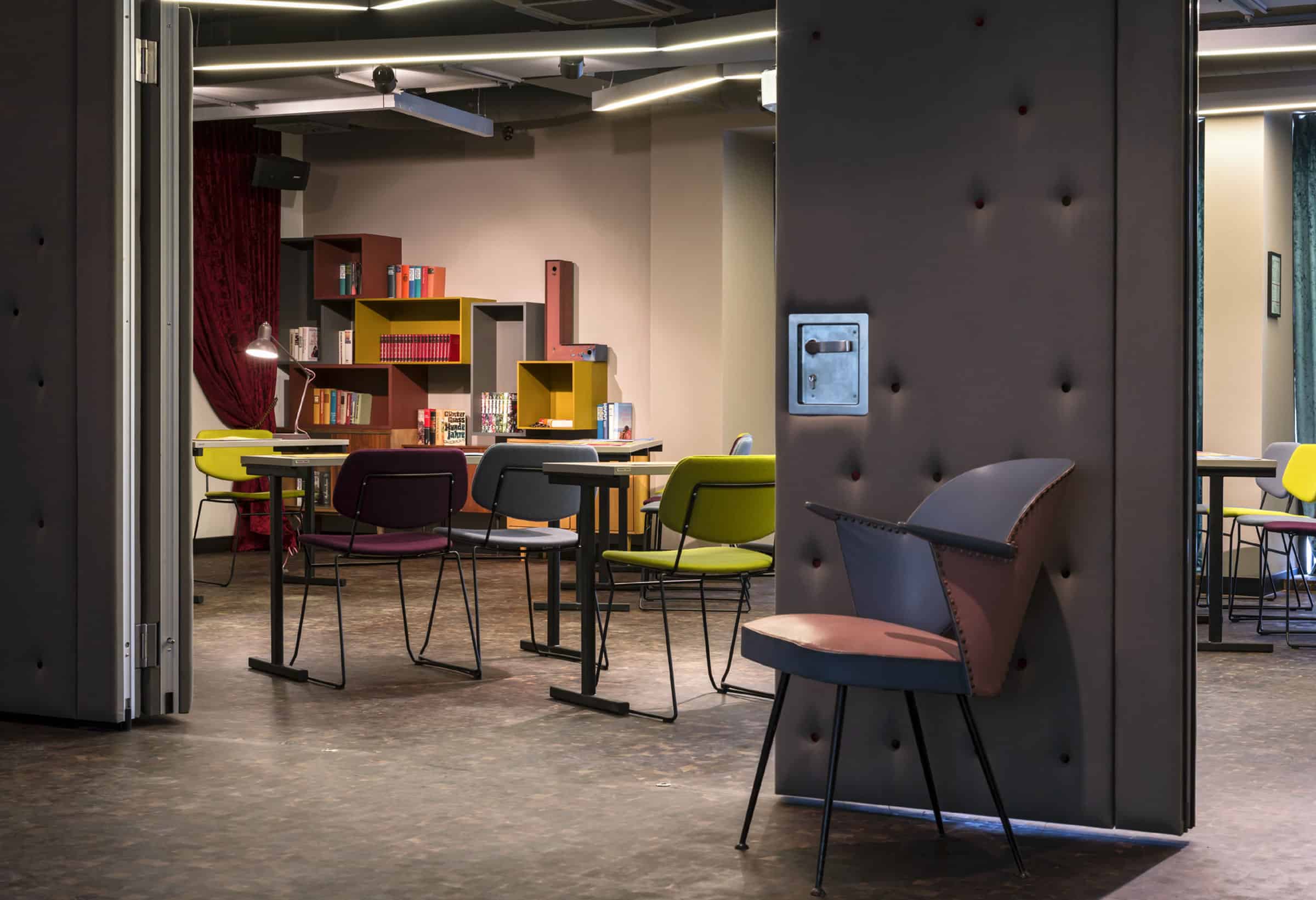 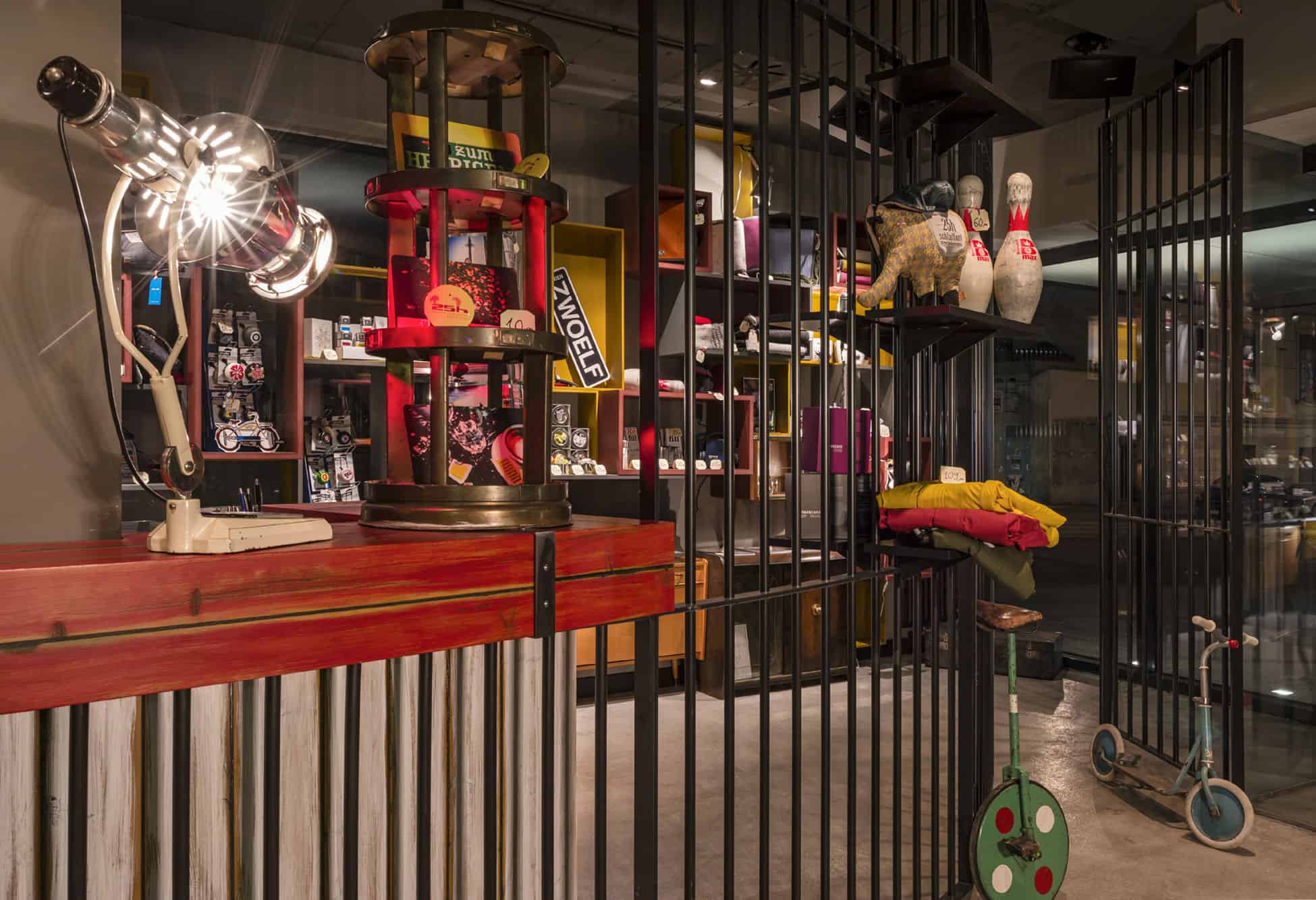 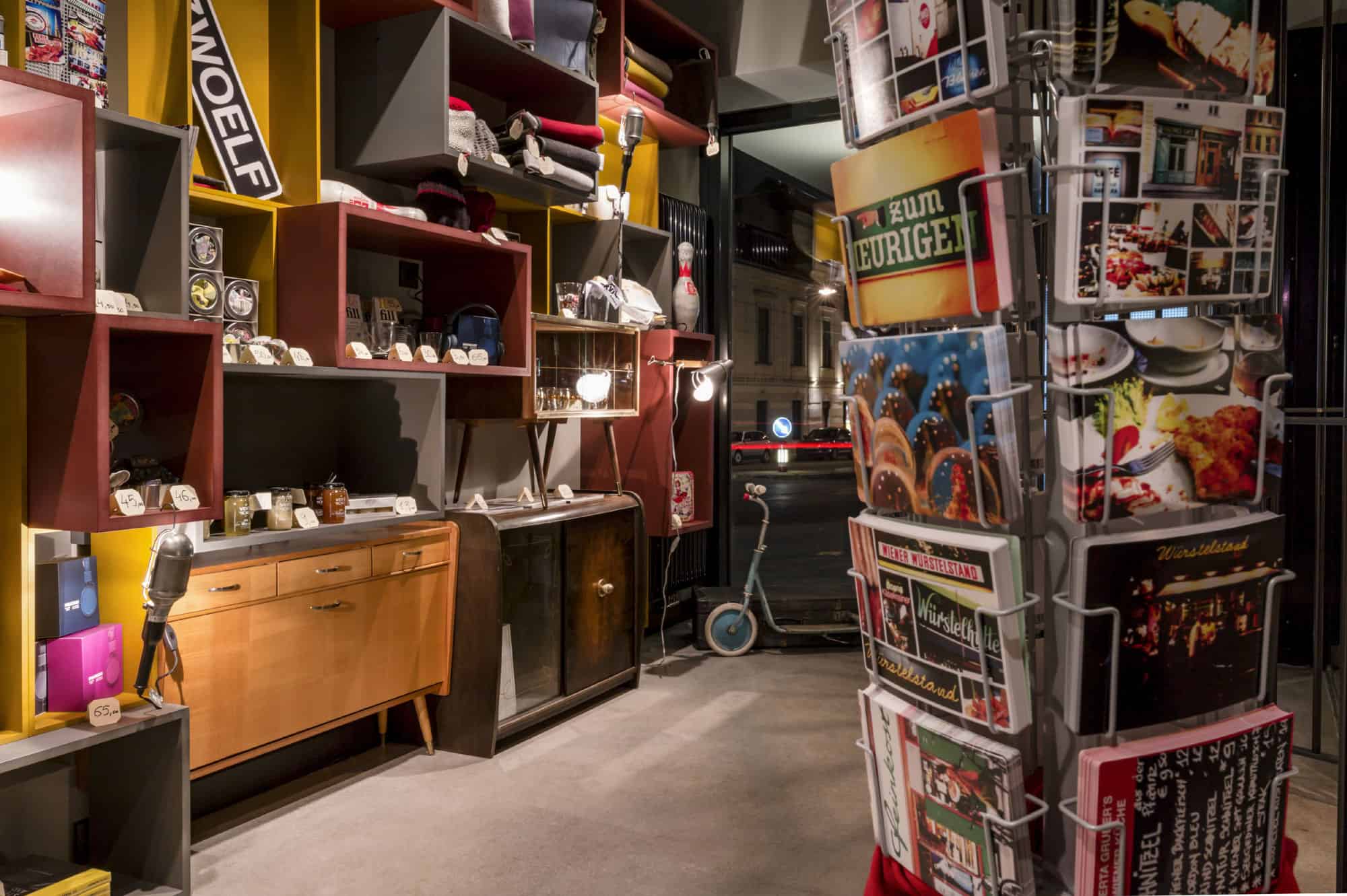 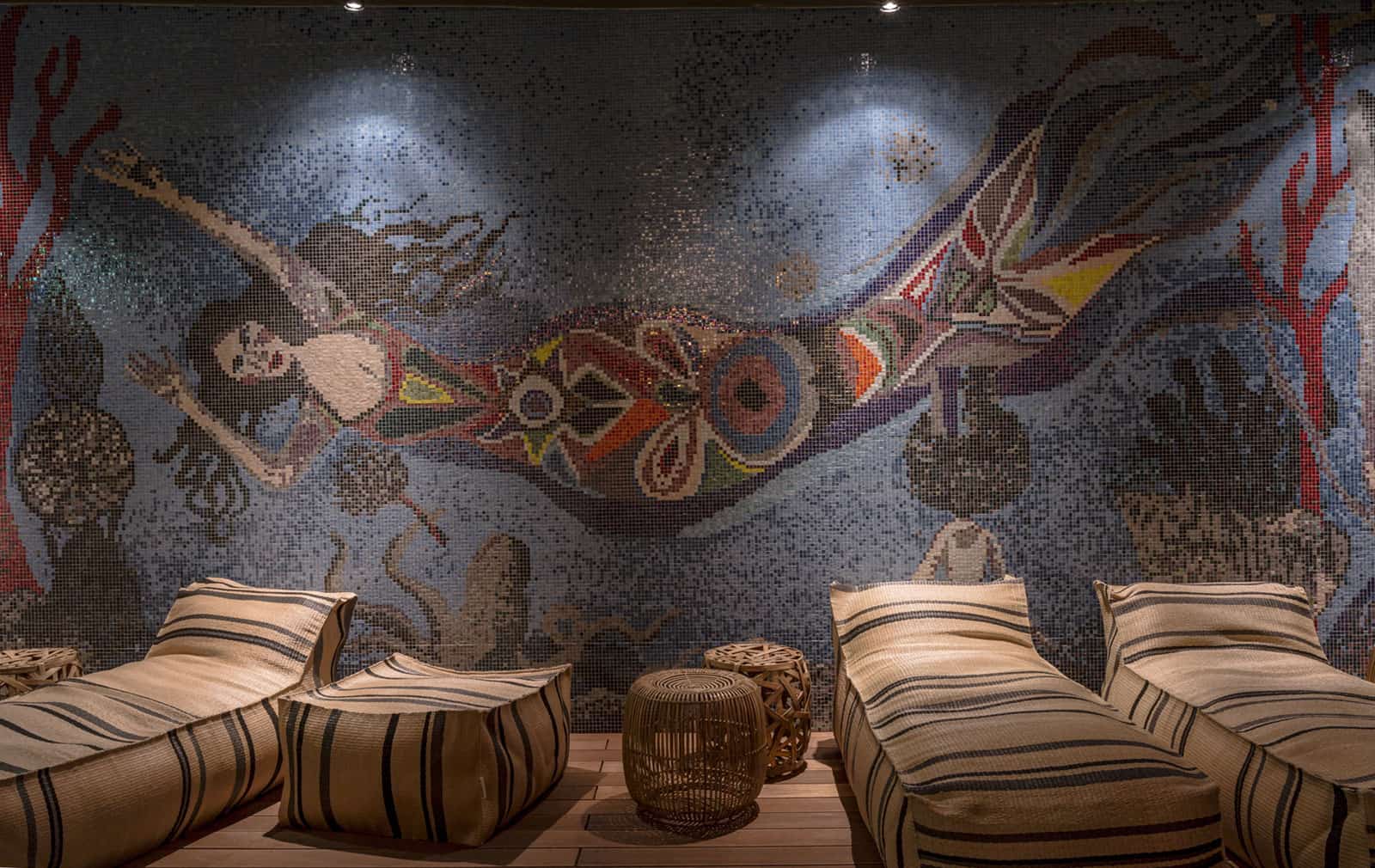 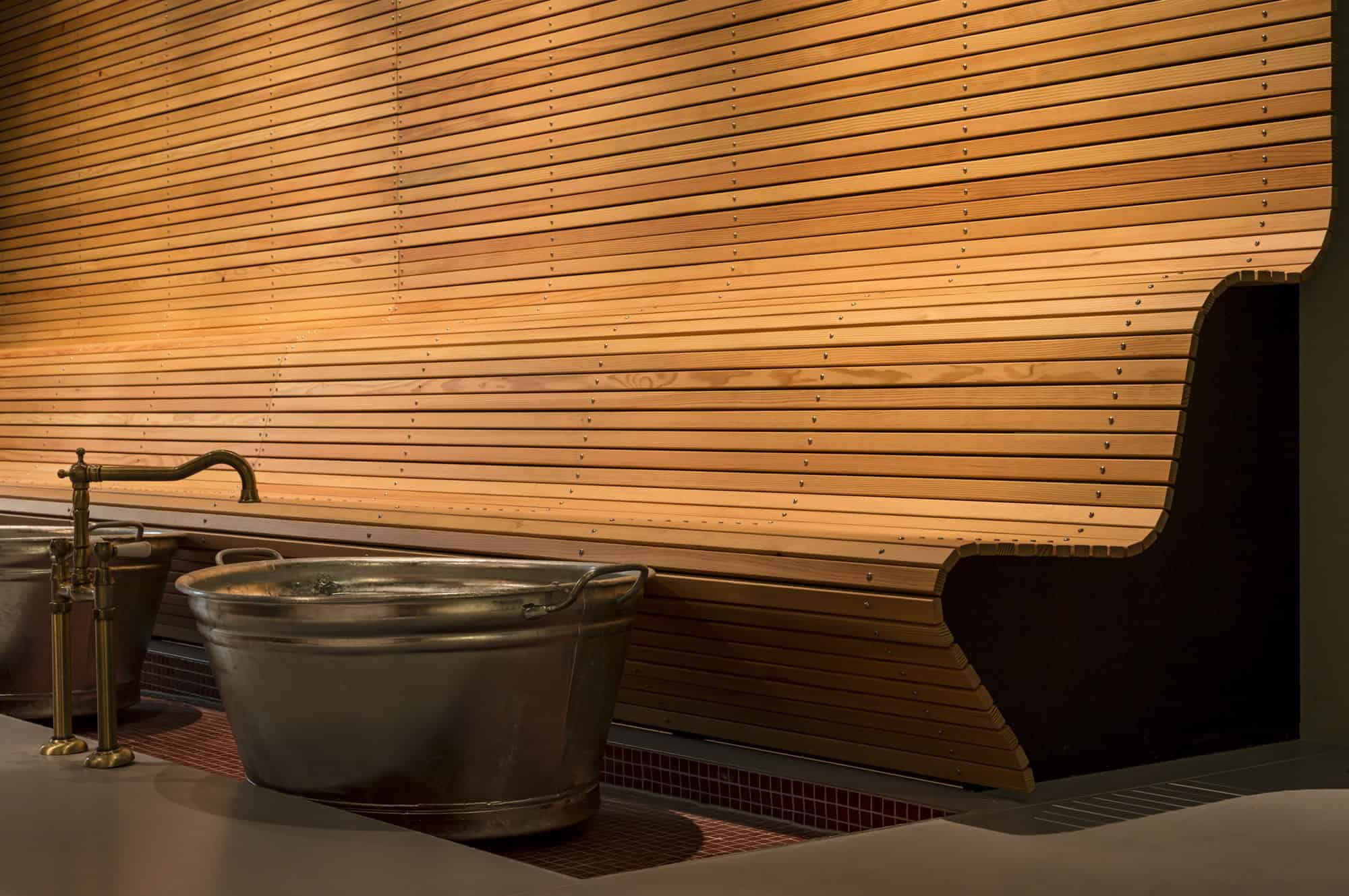 25Hours Hotel Vienna is a quirky hotel designed by the German firm Dreimeta.

The hotel is located in the Museumsquartier of Vienna, Austria, right at the center of the city’s cultural scene.

“Wilful. Surreal. Bold. The interior design work for the 25hours Hotel in Vienna remains firmly in the hands of Armin Fischer and his team at DREIMETA. After the interior designer created 34 suites during the first phase in 2011, a further 185 rooms, a spa, conference areas, a restaurant and a breath-taking roof terrace now round off the hotel. Vienna is synonymous with the spectacular – the Opera Ball, Prater, theatre and, not least, seeing and being seen. As early as 1746, Maria Theresia proclaimed people’s freedom to entertain. With this hotel which comes under the umbrella 25hours brand, the Augsburgbased interior designer has successfully transported this cultural tradition to the former students‘ hall of residence in the Museums- Quartier. Improvisation – the world of the circus, here today gone tomorrow – as well as Vanity Fair played a pivotal role for the designers. Apparent opposites, eclecticism and hand-picked individual pieces go together to create a uniquely relaxed atmosphere. This design approach which has shaped the suites and the hotel‘s now legendary „Dachboden“ since 2011 has now been applied throughout the hotel, which opened for guests in the first days of April. This 25hours Hotel provides a welcome break from everyday life by allowing us to immerse ourselves in a different world. A world of entertainment and the spectacular which challenges our powers of imagination“, said Armin Fischer, describing his approach which formed the basis for DREIMETA‘s design concept around three years ago.

In addition to the 34 suites, a further 185 rooms measuring between 17 and 28 square metres (183 and 301 square feet) have been available since April 2013. Thick, soft carpets on rough concrete floors, heavy velvet curtains and five different wallpapers created exclusively for the hotel depict the overall theme. Particular highlights are the extra high beds which tower some 70 centimetres (27.55 inches) above the floor. In design terms, the other fixtures are reminiscent of the furniture in a circus caravan. The bathroom for example is like an artiste‘s dressing room. Everything is practical and functional. If necessary, the glass dividing wall for the showers can be screened off from the bedroom using a window shutter. The aim of Armin Fischer, the creative mind behind DREIMETA, and his project manager Britta Kleweken was to make each individual room seem unique using surprising details and authentic objects.

Integrated into the overall design concept, the 1500 Foodmakers restaurant seats around 140 people and has its own distinct personality. Combining simplicity and elegance, the open kitchen offers guests modern, refined Italian cuisine inspired by hip locations in Santa Monica, Los Angeles and New York. The room captivates with its various levels as well as the harmonious combination of cosy niches, leather benches, large dining tables and the eating counter in the middle as a highlight. With around 20 seats, the counter is the centrepiece of the restaurant. Thanks to its colourful front panelling – a conglomerate made up of leftover tiles – it stands out from the otherwise simplistic colour scheme in the rest of the room. In the 250 square metre (2,690.98 square foot) spa area, guests can relax after making their „big entrance“. The seven metre (2.75 foot) long wall mosaic of an underwater world with a mermaid playing the main role was designed by the Berlin-based artist Olaf Hajek. Numerous glass domes allow light in, creating a relaxed atmosphere in the entire area. The hanging chairs inspired by a swing carousel radiate a sense of tranquillity. Above all of this, there is the „Dachboden“ which is popular with residents of Vienna and hotel guests alike. Accessible via an outside lift, the 400 square metre (4,305.56 square foot) roof terrace on the eighth floor offers a spectacular view of Vienna. What makes it so special is the unique concept created by the Augsburg-based design team. In the mornings, it offers guests and customers an ideal place for creative work. In the afternoons, it turns into a hip lounge. And in the evenings, it becomes an after-work meeting place with an adjacent club and open-air bar open late into the night. Back in 2003, DREIMETA was responsible for the design concept in the first 25hours Hotel in Hamburg. Now that the hotel in Vienna is finished, the company has created yet another showpiece, this time in the MuseumsQuartier, one of the ten largest cultural areas in the world.”

Penthouse in Wilanów by HOLA Design