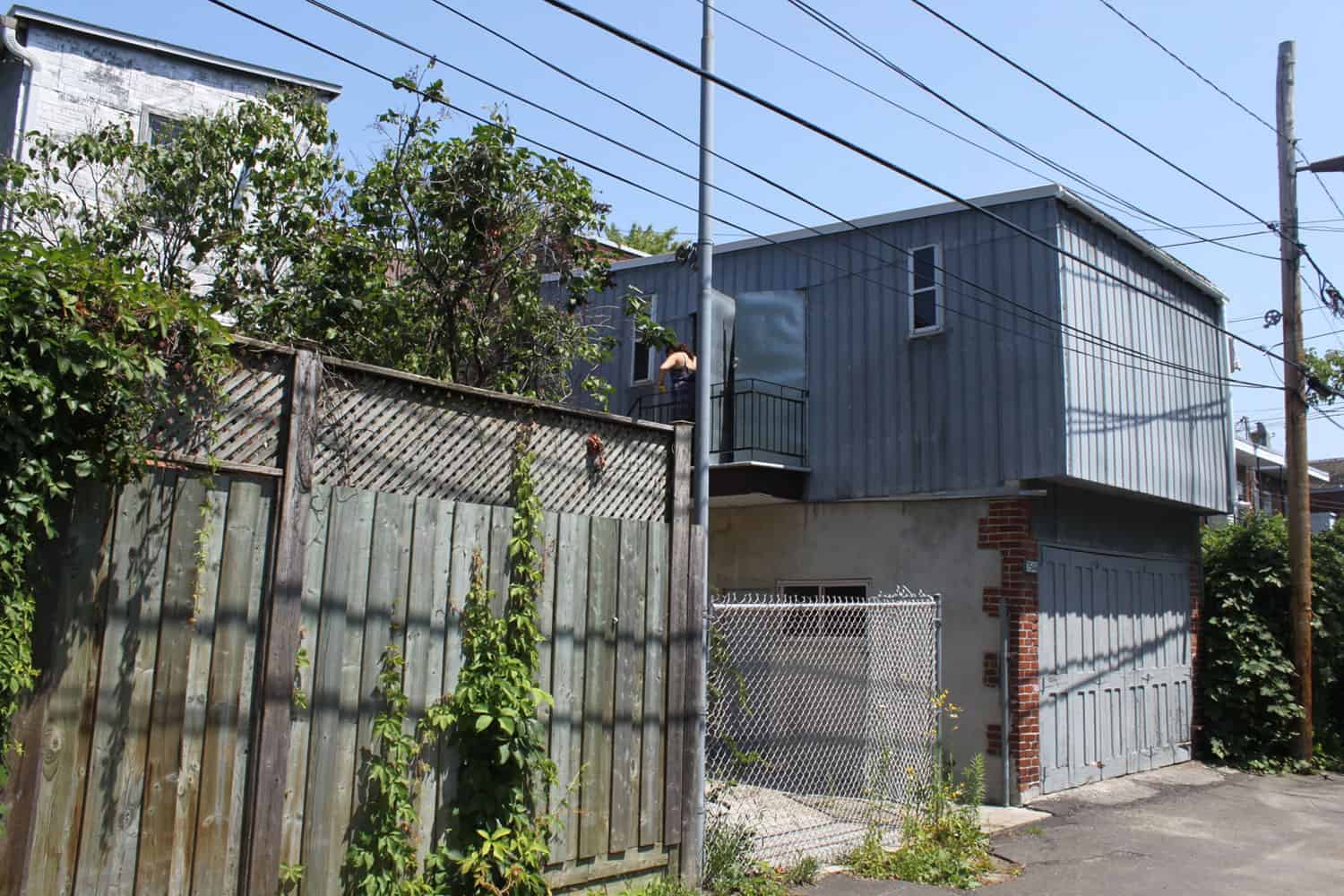 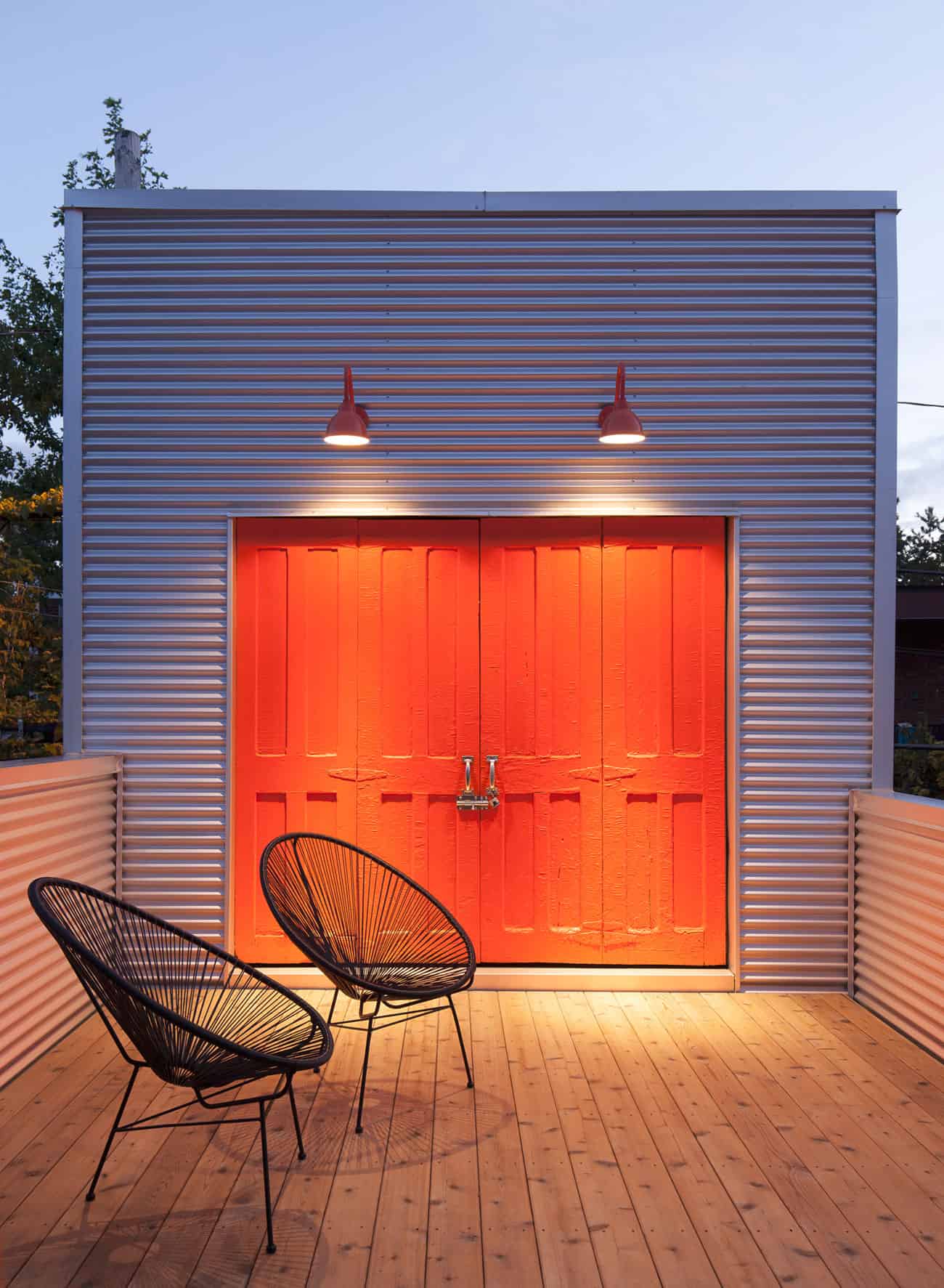 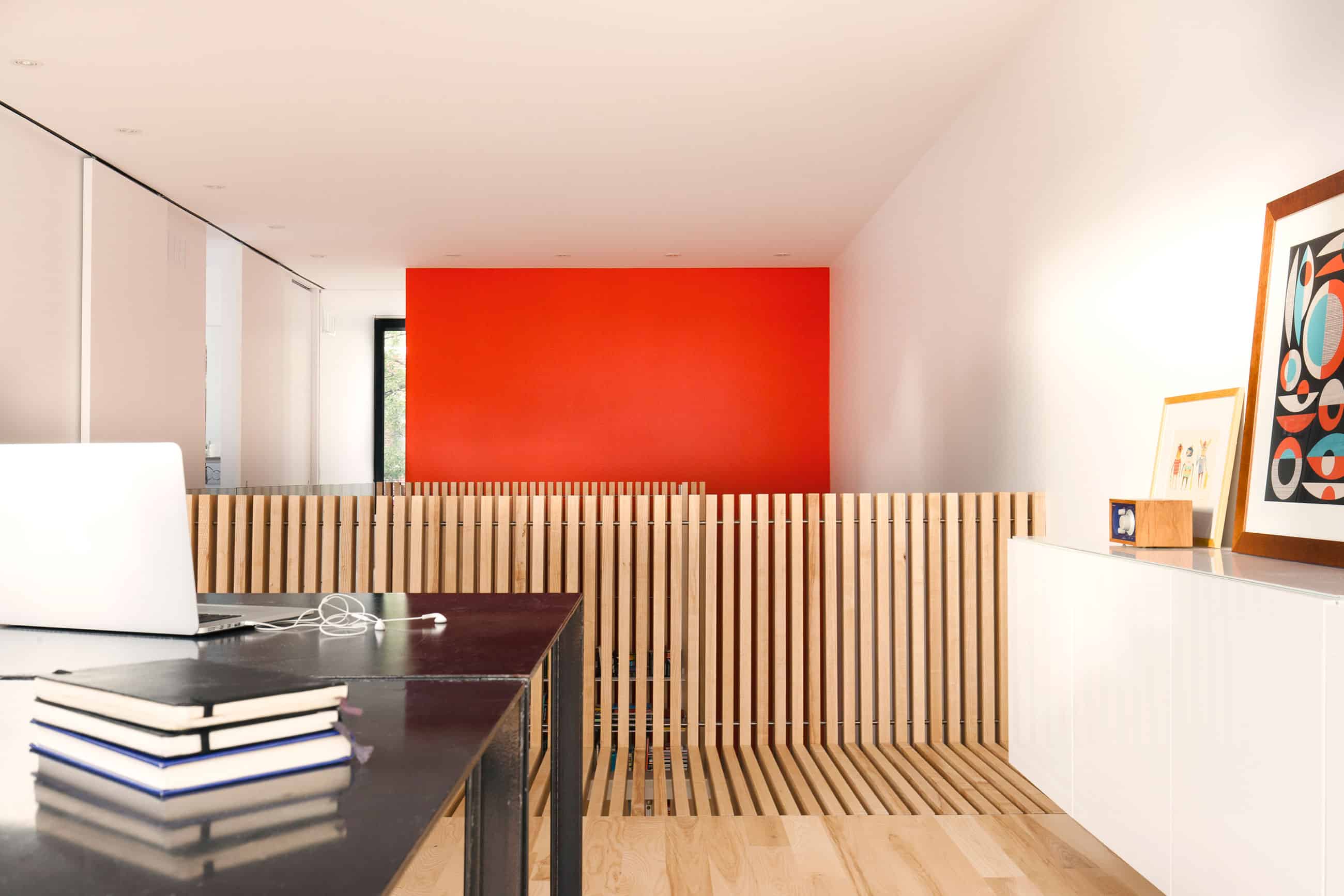 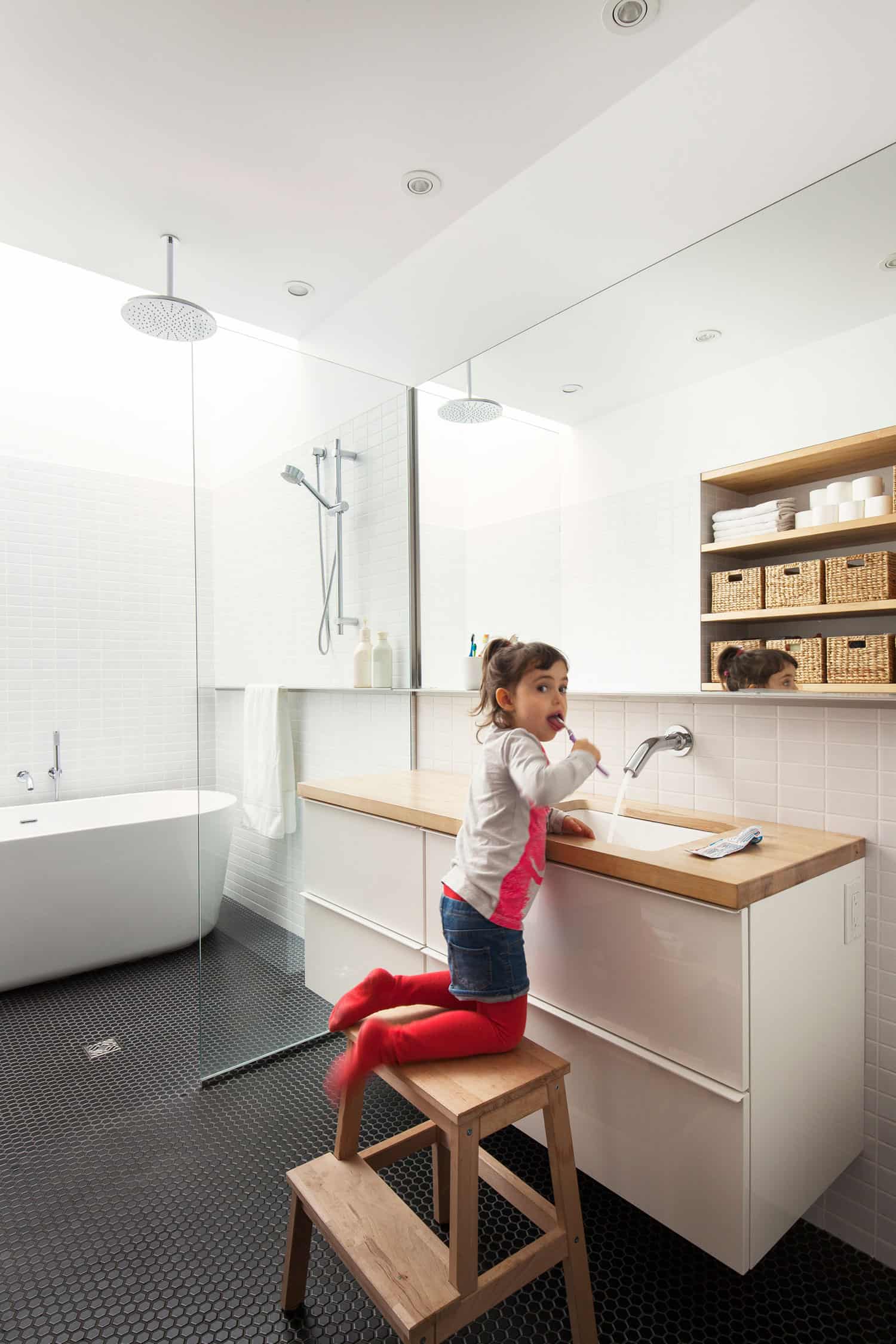 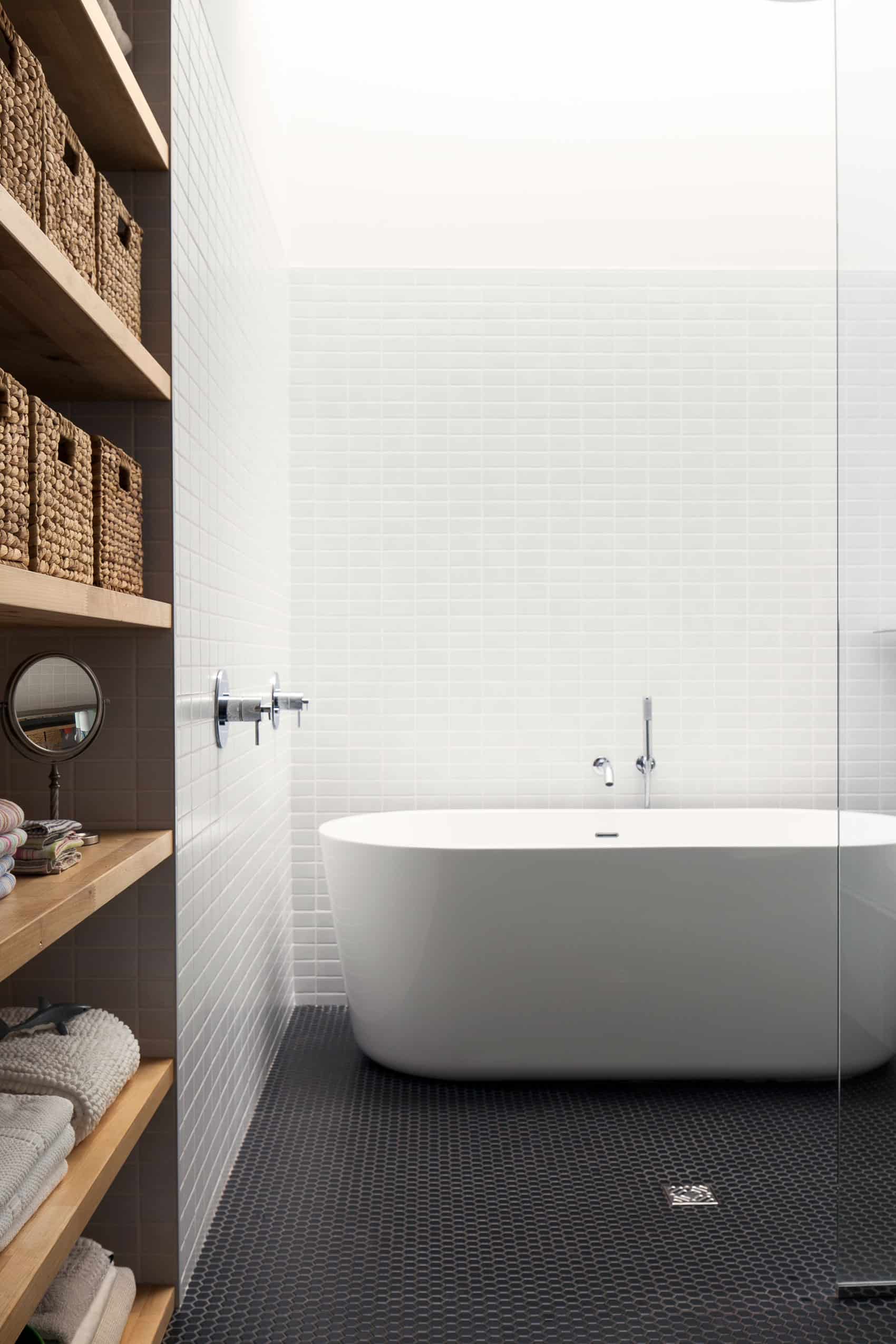 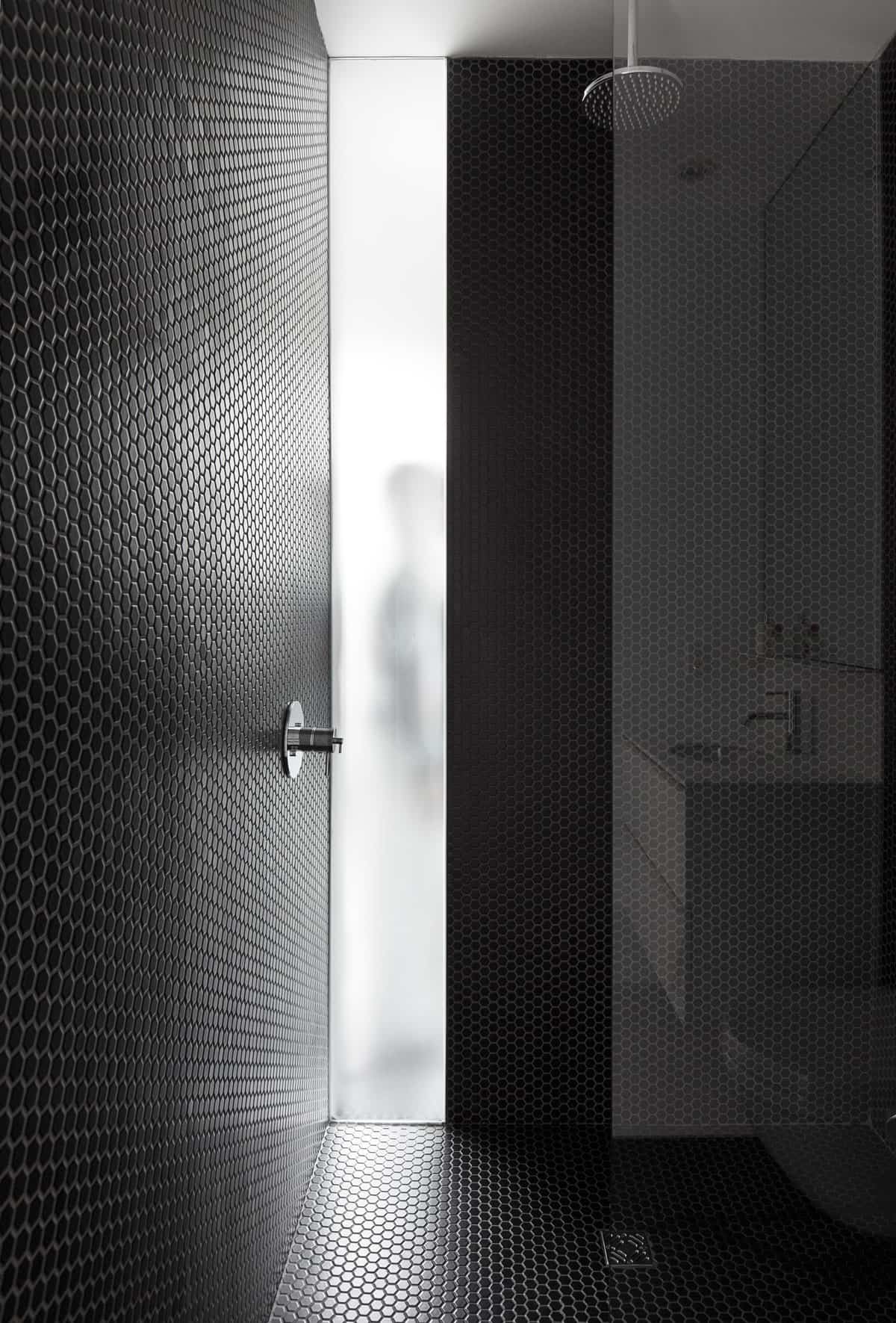 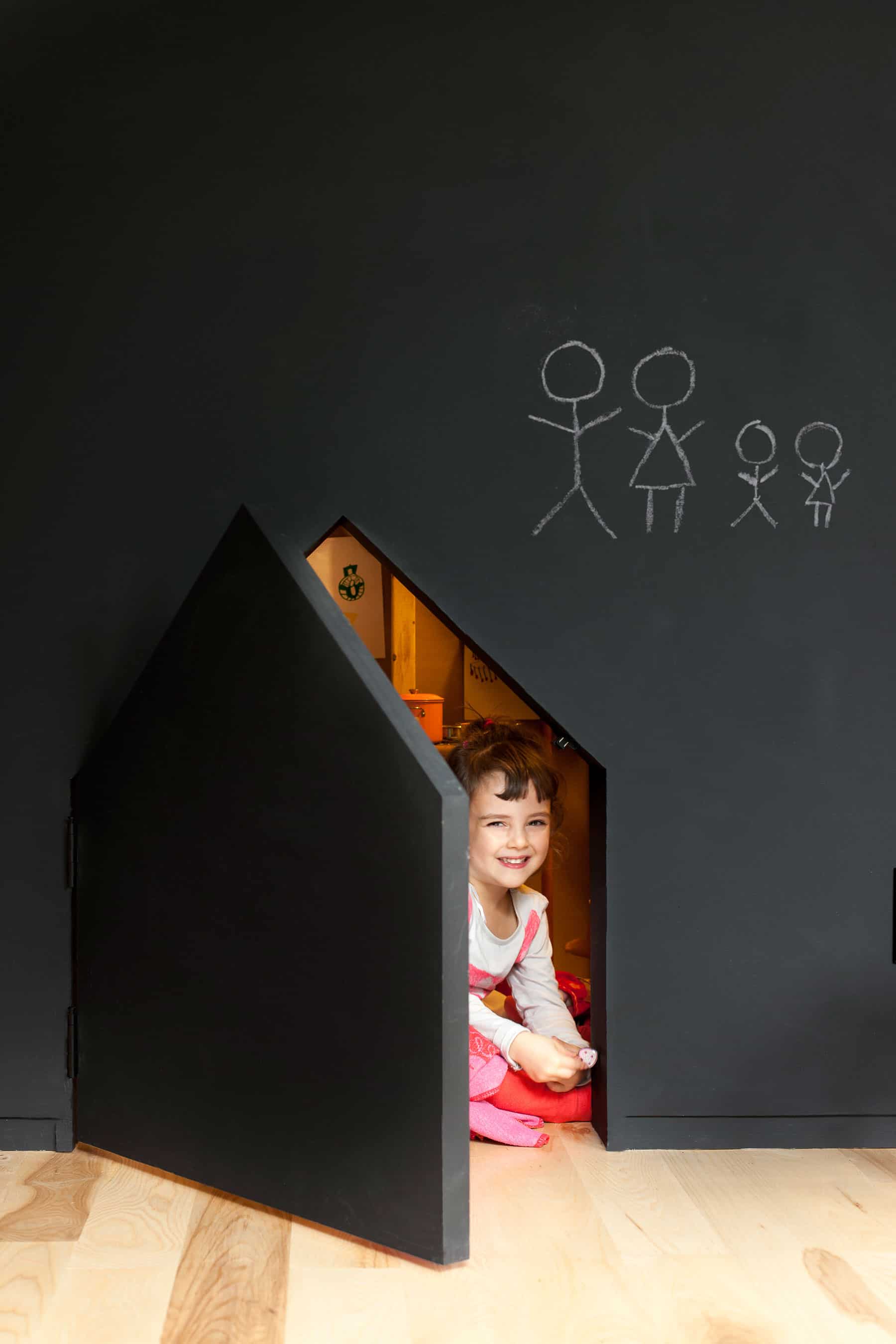 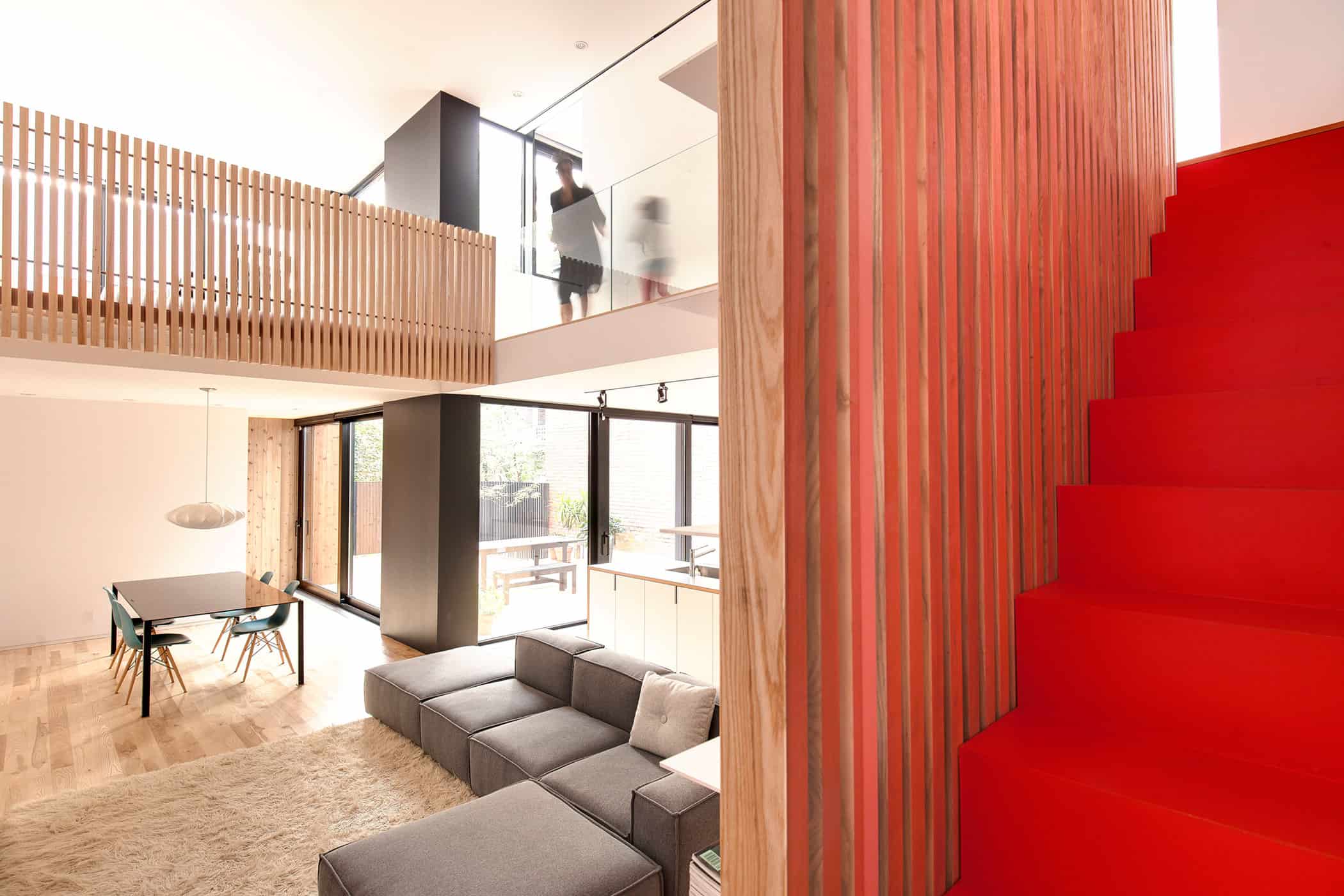 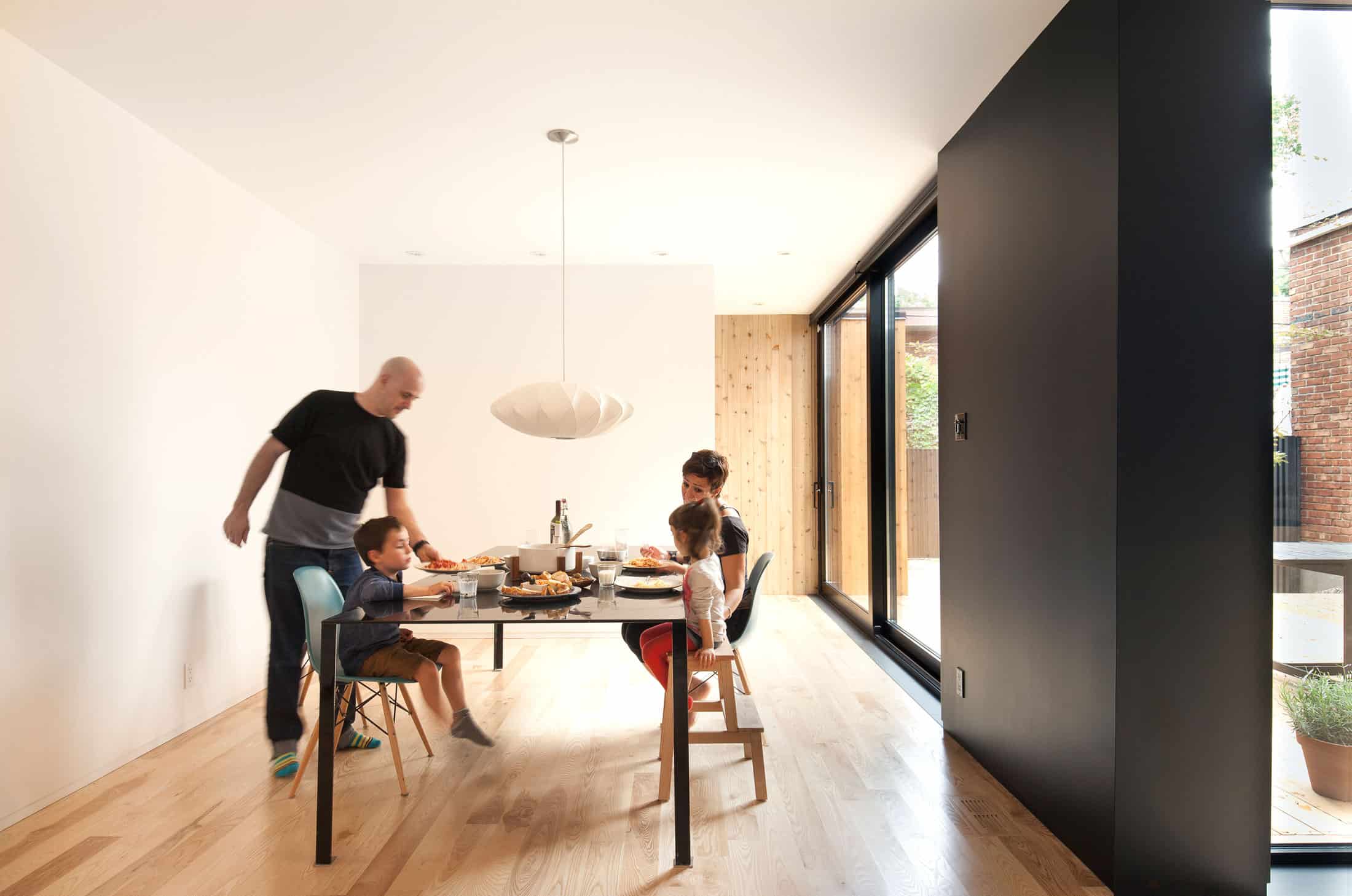 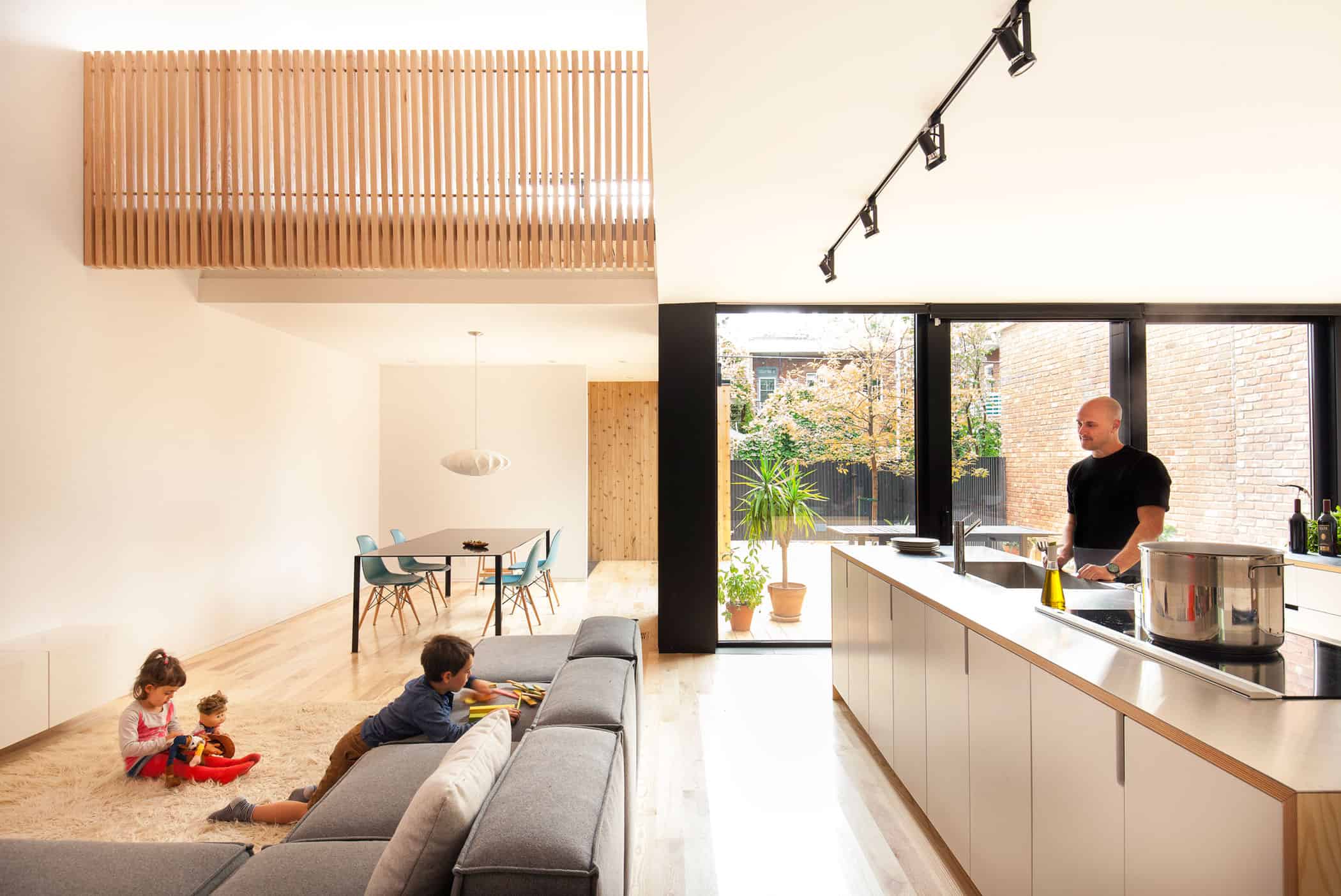 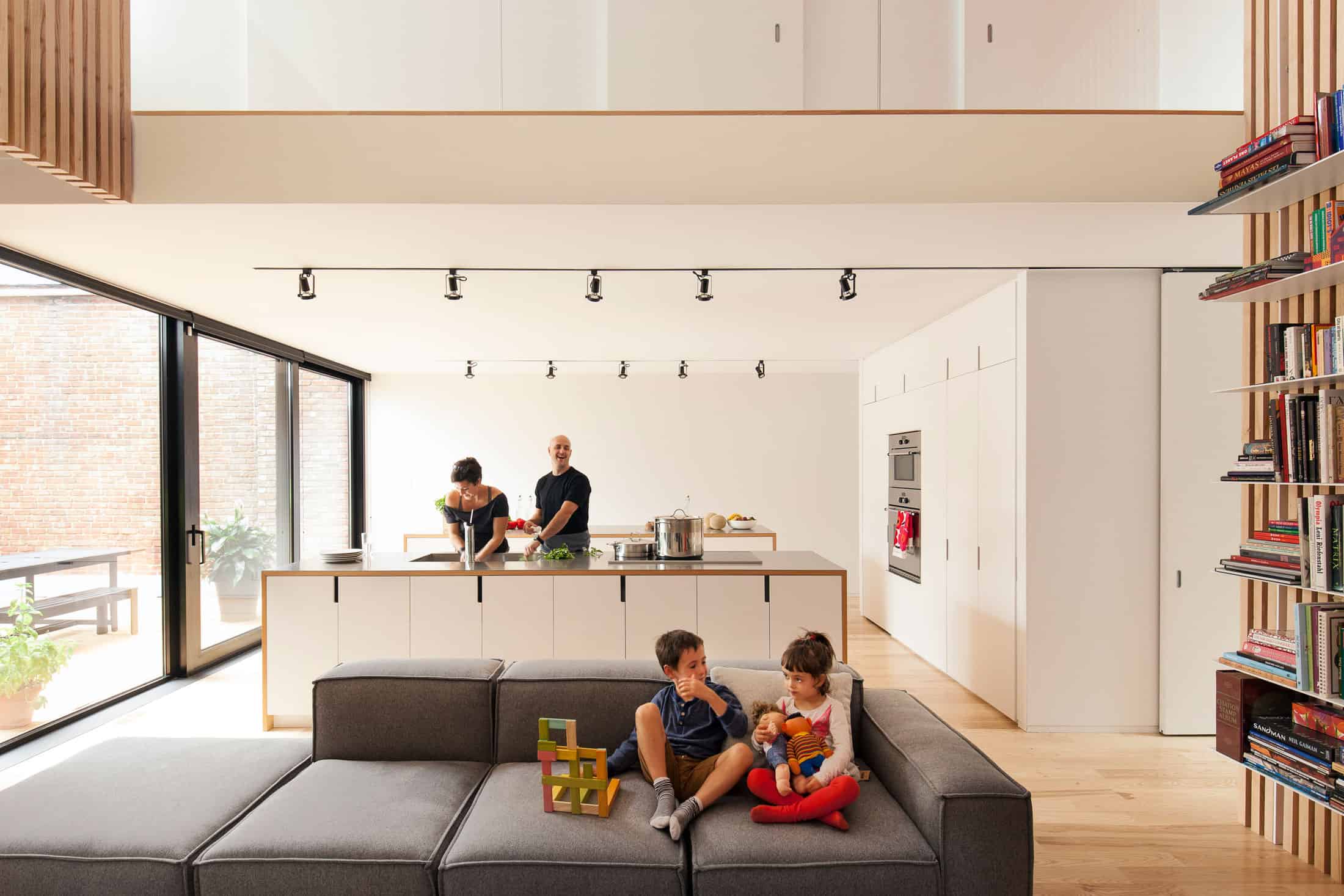 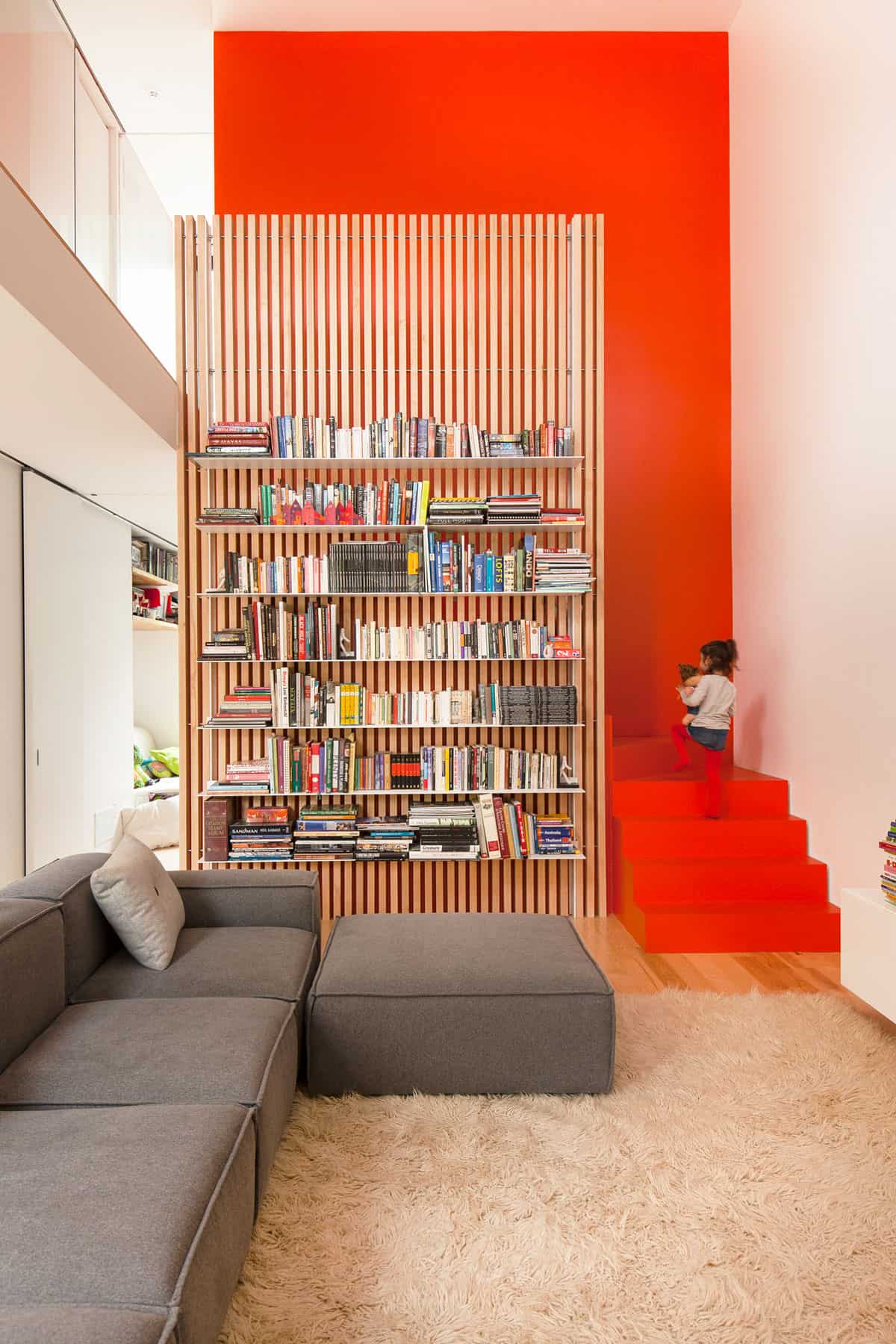 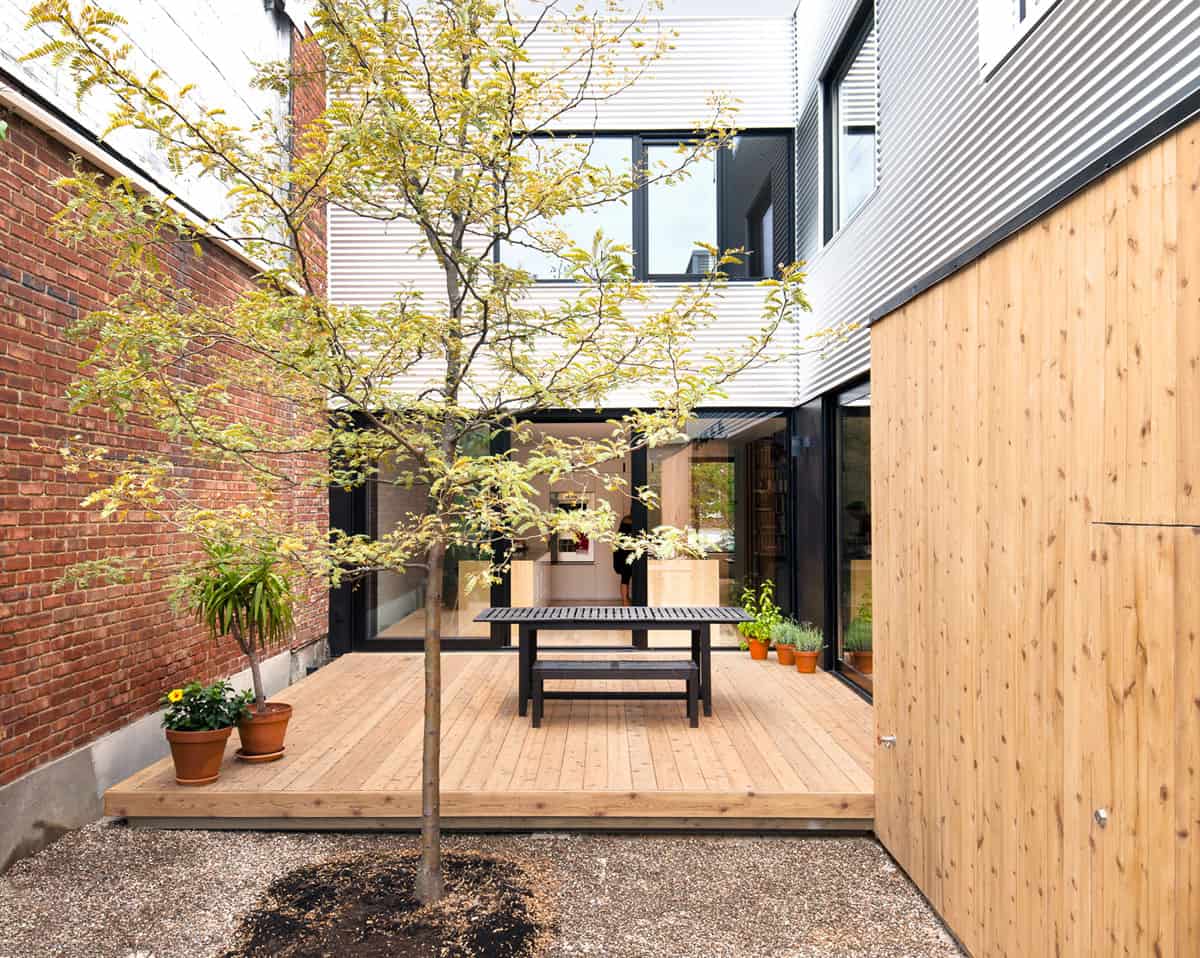 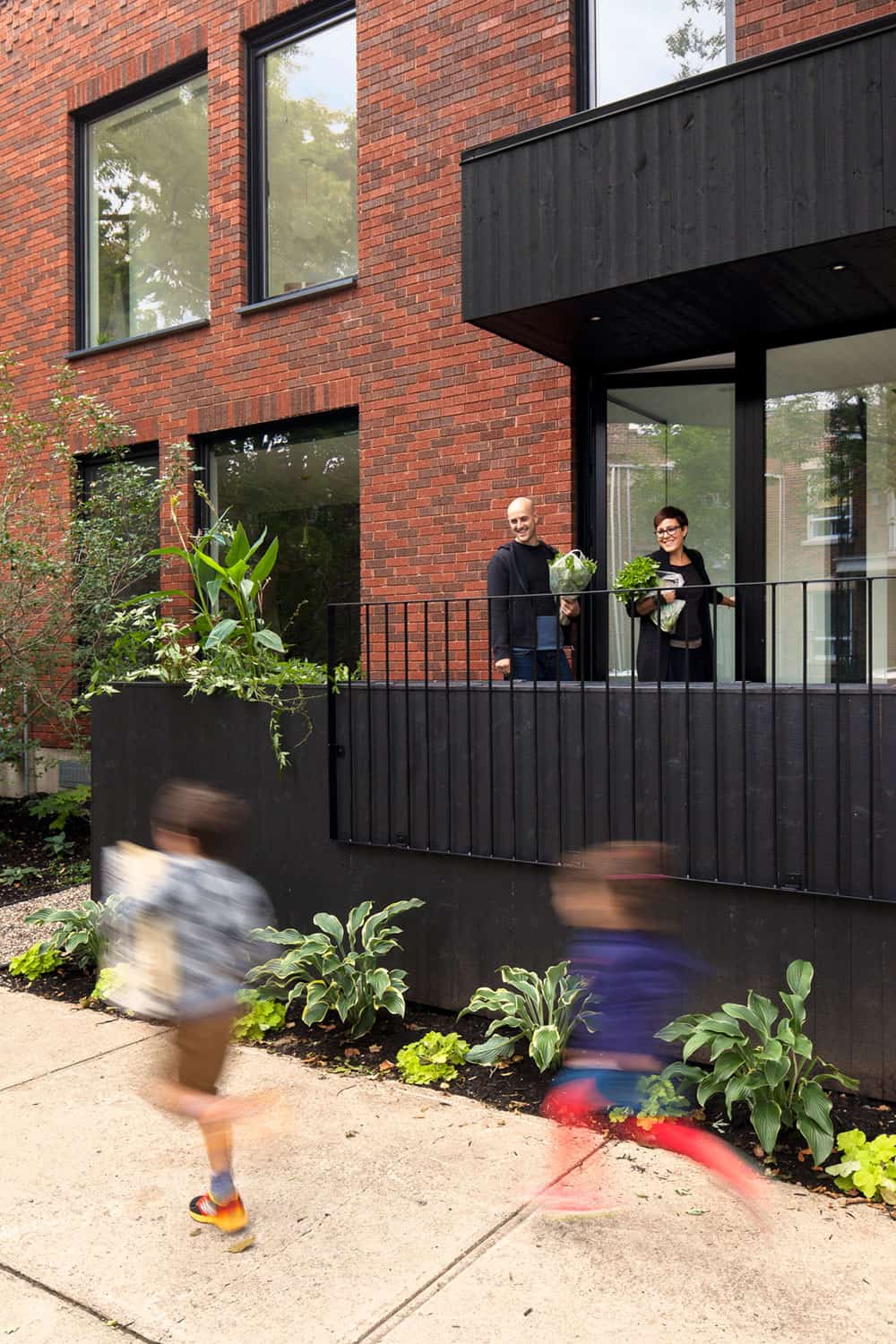 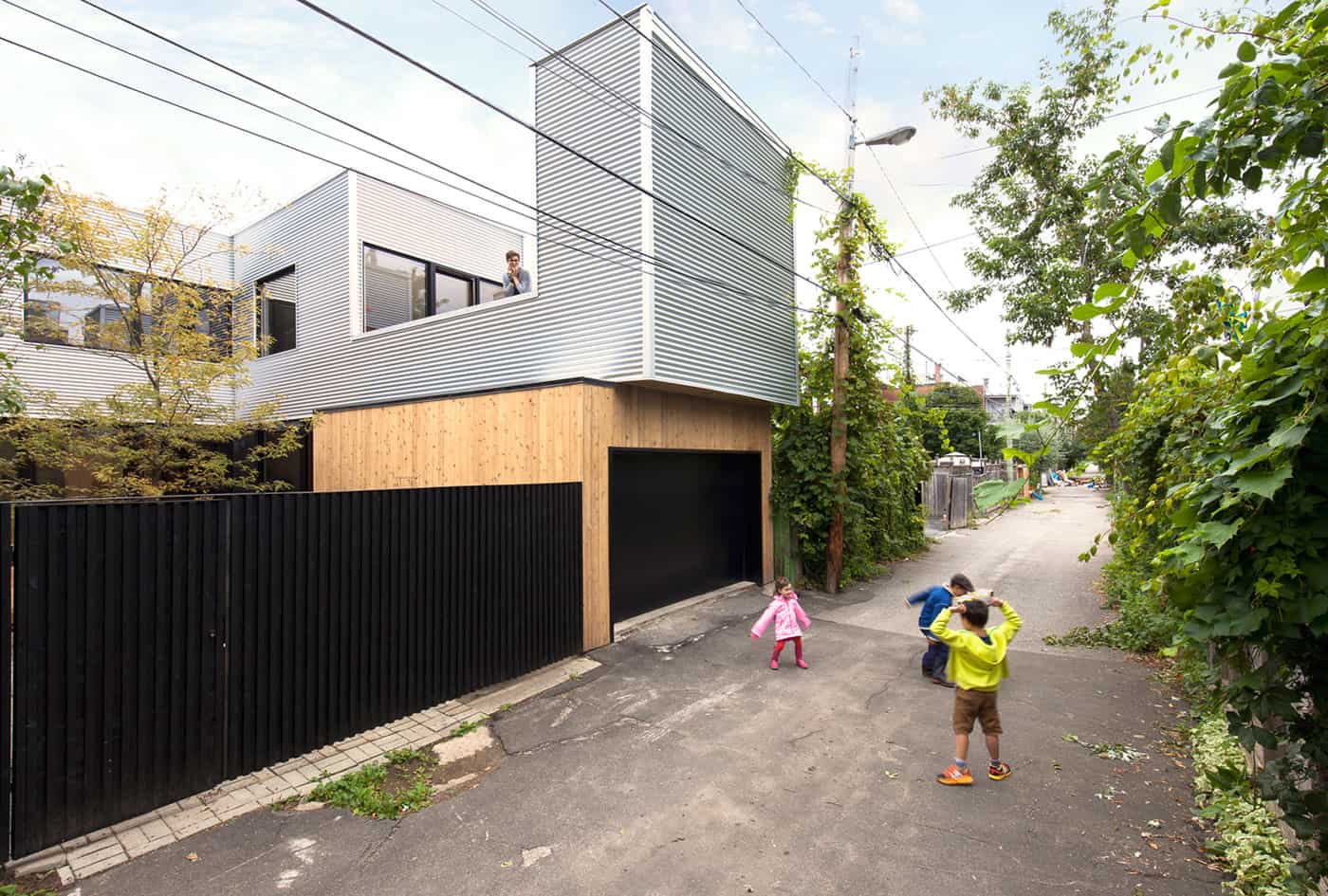 It is located in Montreal, Canada.

“Located in the heart of the Villeray district, the De Gaspé House project consisted of the major renovation of an existing building that lost most of its original characteristics. The old duplex including a garage as well as a variety of annexes was transformed into a single family home for two adults and two children.

The façade went through a variety of transformations over time that made restauration impossible. The project designers thus chose to create a contemporary facade that would seamlessly integrate with the surrounding housing stock. In order to do this, a variety of steps were taken in order to reconcile new and old. Firstly, dark painted clay brick was chosen as the material for the facade because of its resemblance to the surrounding buildings. A remodeling of the openings allowed windows to be placed vertically once more, while relief work on the brick crowning alluded, in a modern manner, to the traditional masonry ornaments typical of the surrounding area.

Inside, a compact block containing the service areas (closets, bathroom, storage space) was positioned near the entrance in order to create an intimate separation between the vestibule and living spaces. Once past this block, in the kitchen, the occupant can enjoy a clear view of all common areas. All upper elements of the kitchen were placed in the service block, which allows for an organization of work spaces around two islands oriented towards the living room. Covered in a thin sheet of stainless steel, these islands help increase the space’s luminosity. On the ceiling, rail lights and sliding doors create a border for the kitchen while surrounding the service block that slides into its position seamlessly.

The living room, aligned with the kitchen, benefits from having twice the ceiling height which brings light from the first floor down to the ground floor. This space is framed between two pieces of woodwork wooden slats that filter and play with the occupant’s perception of the living room’s spatial limits. On one side, an elegant bookshelf extends to the double height space and acts as a screen that hides the stairs. Thin white steel tablets are integrated in the wood lattices and create a contrast with the orange background provided by the stairs. On the other side of the living room are a bridge and railing that are made of materials matching those used in the bookshelf; this bridge lets the occupant have a sneak peek at the office above.

At the top of the stairs a large hallway that opens on the living room’s double height space regulates access to bedrooms and the bathroom. This circulation, controlled by a multitude of sliding doors, creates a space in constant evolution throughout the day. The master bathroom contains a skylight the same width as the room itself and is thus flooded with natural light that is reflected by white ceramic walls, a freestanding bathtub and the large mirror above the vanity. The black hexagonal mosaic floor as well as solid wood horizontal surfaces act as contrasting elements in relation to the omnipresent whiteness of the bathroom.

At the rear, the house’s original volume was preserved while removing a portion of the first floor in order to create a patio. This removal allowed for an alleviation of the building’s density in relation to the backyard, while providing the garden with further natural light and a more open line of sight. A galvanized corrugated steel coating was applied to the first floor in order to lighten the enclosed exterior area while offering a sustained contrast between various black elements of the façade and fence separating the yard from the alleyway. As for the garage, it was located in a light wood block that extended from the inside of the house, thus amplifying the continuity between indoors and outdoors already highlighted by the extension of the wooden floor between the kitchen and outdoor patio.”