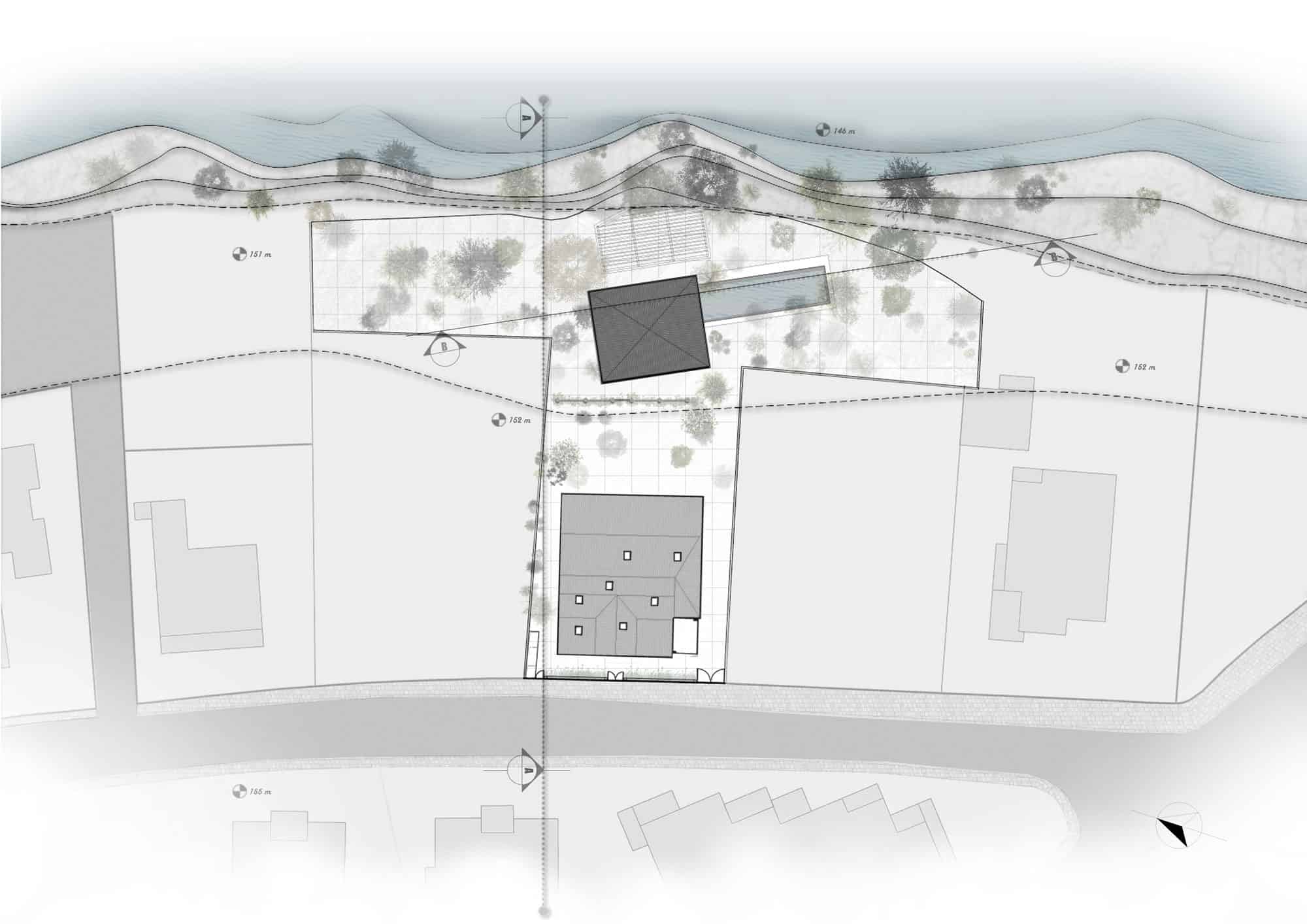 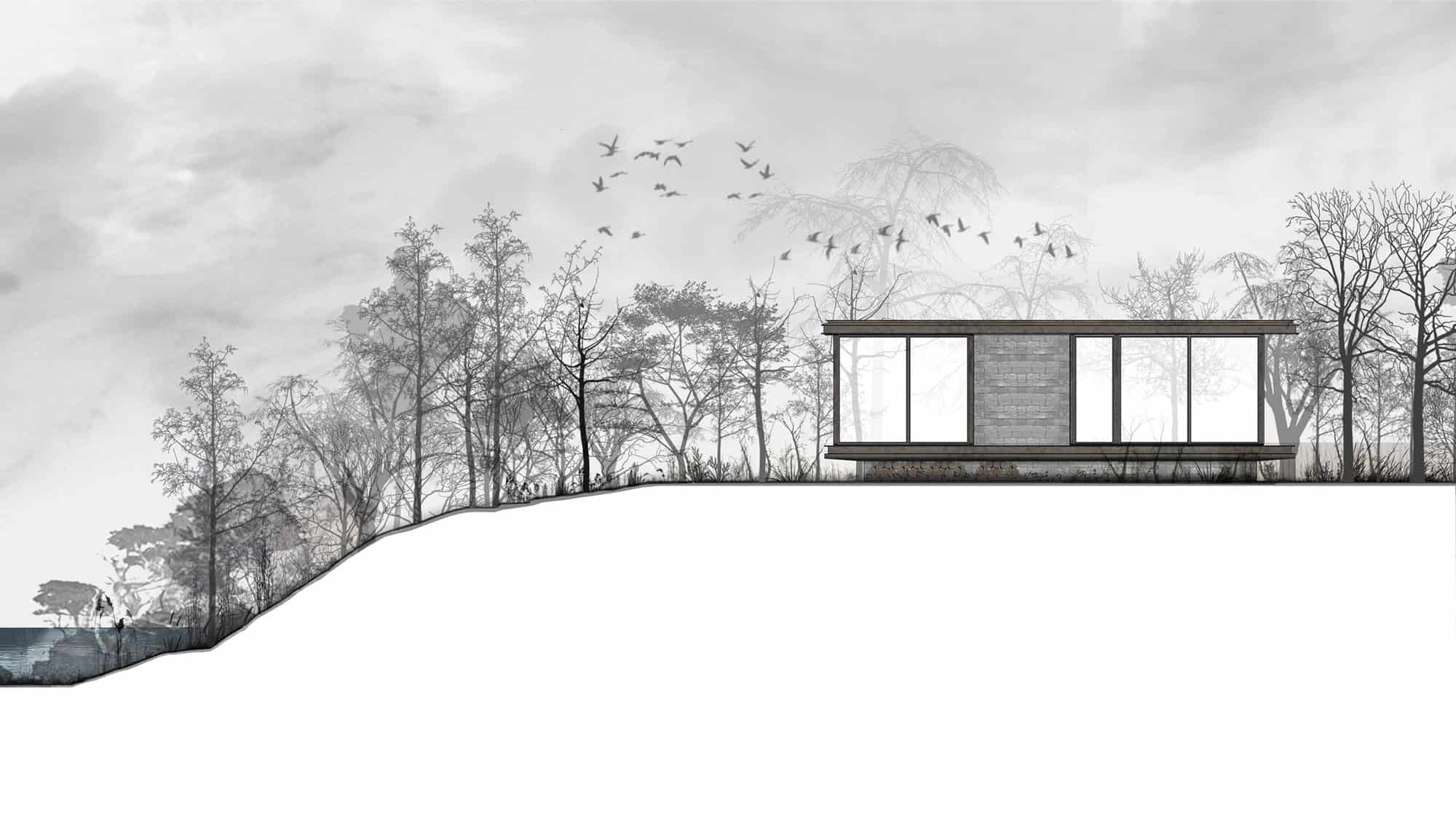 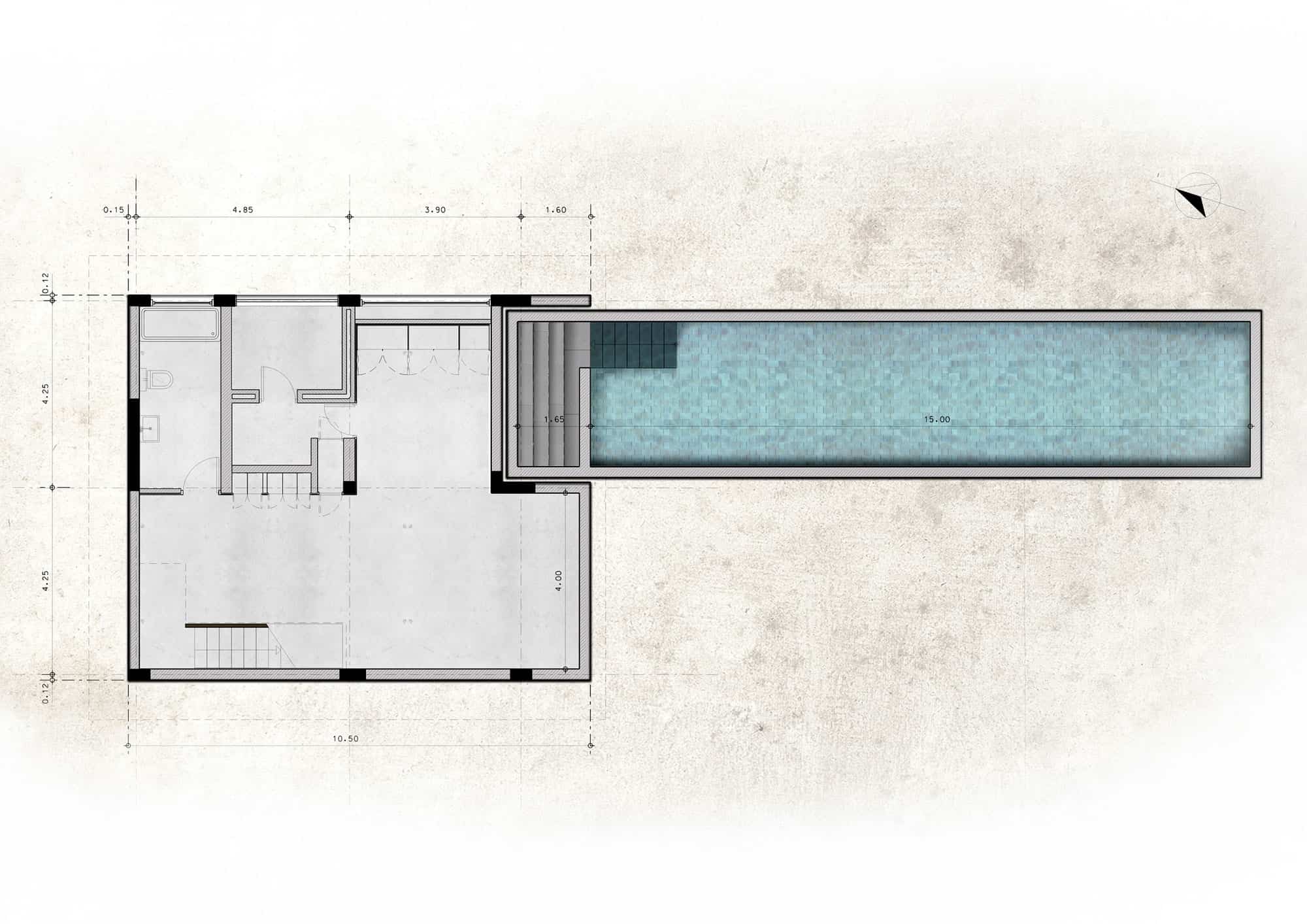 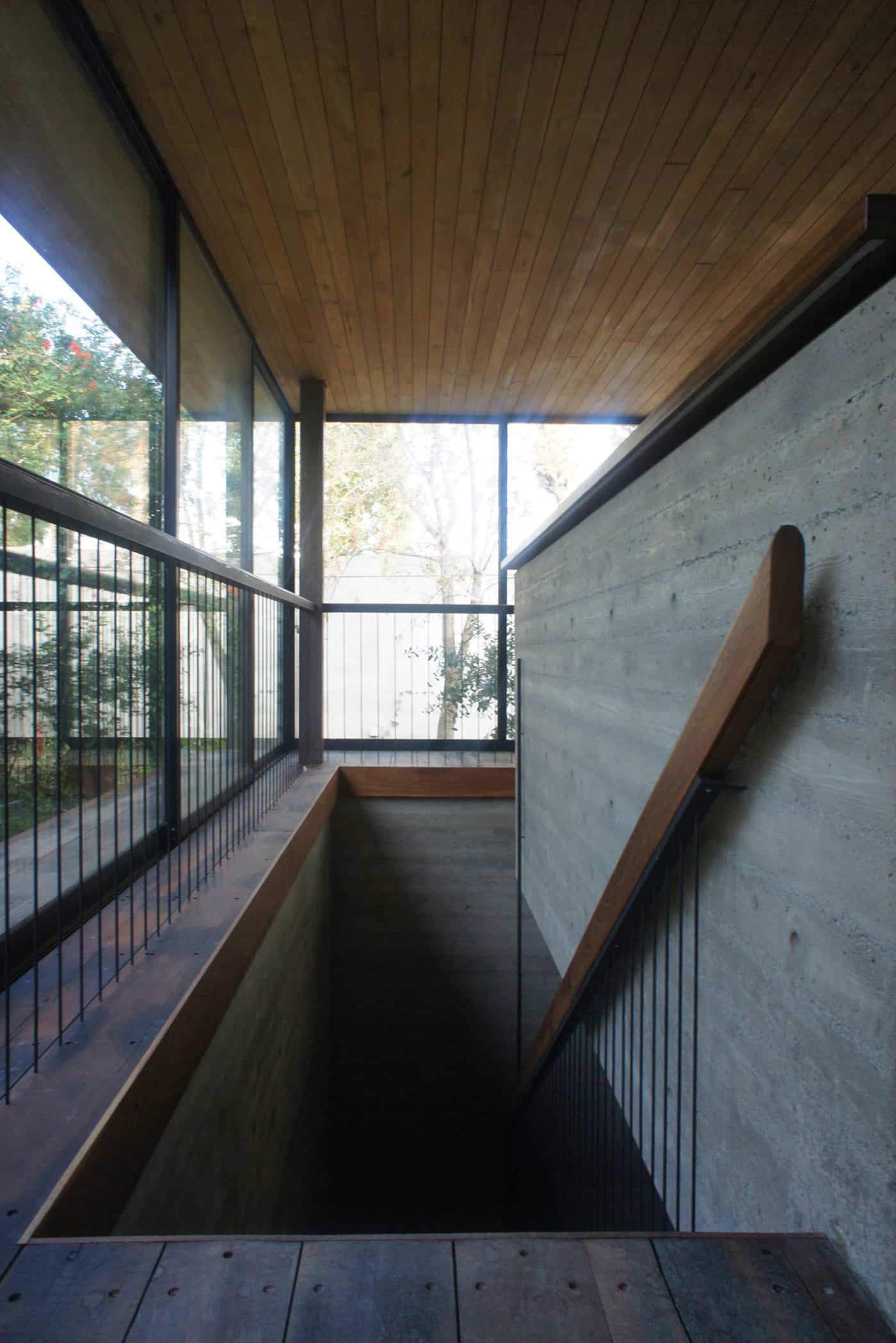 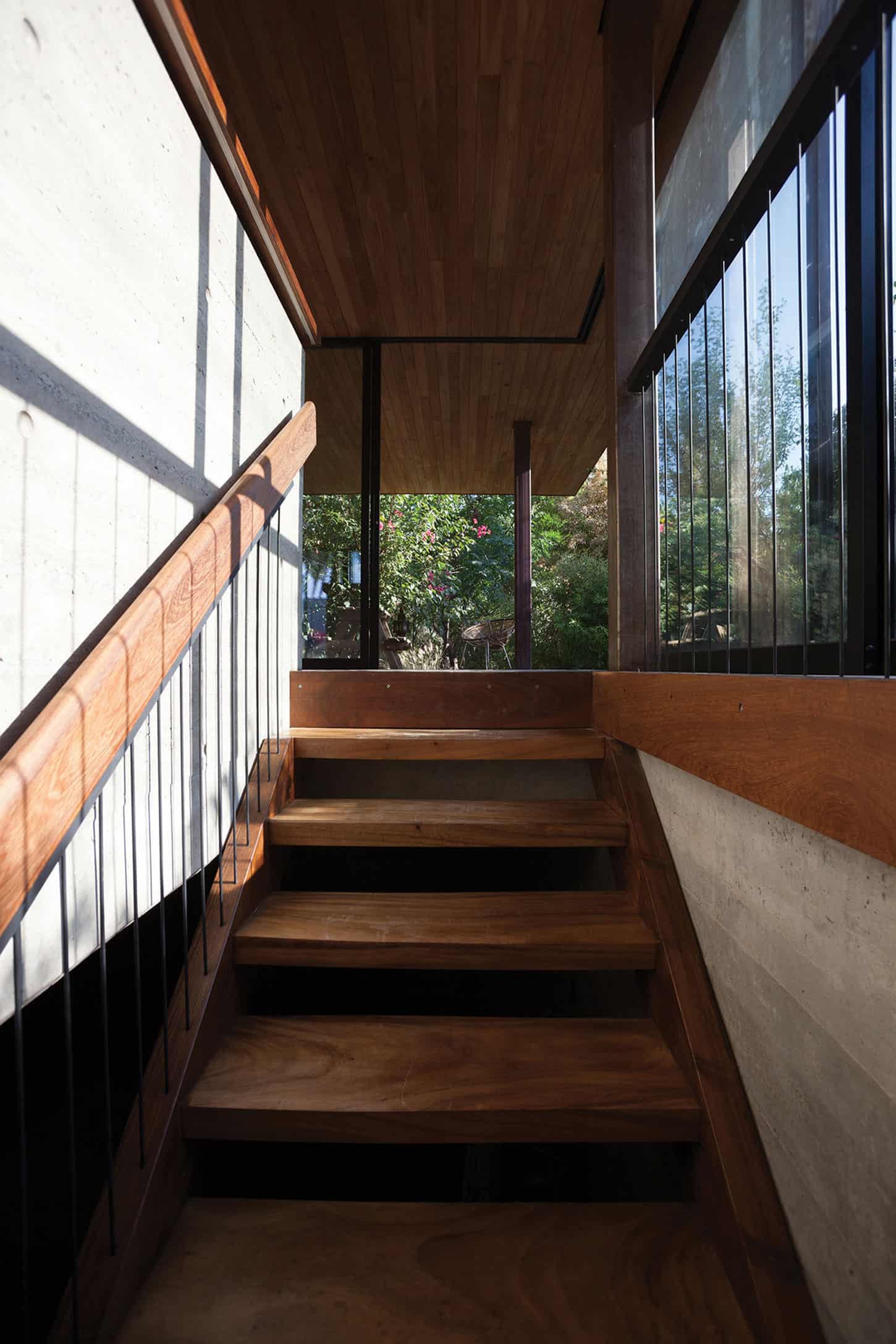 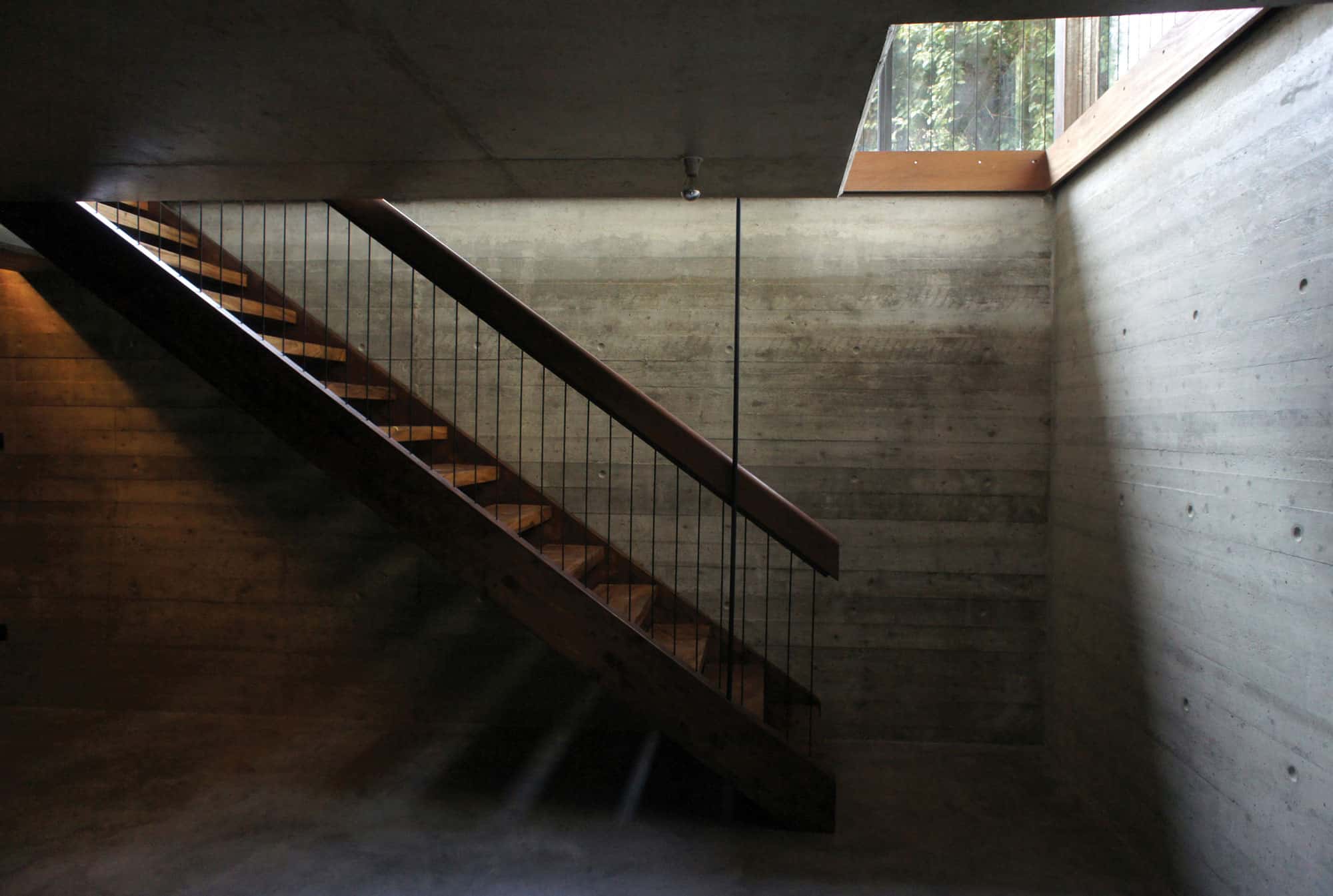 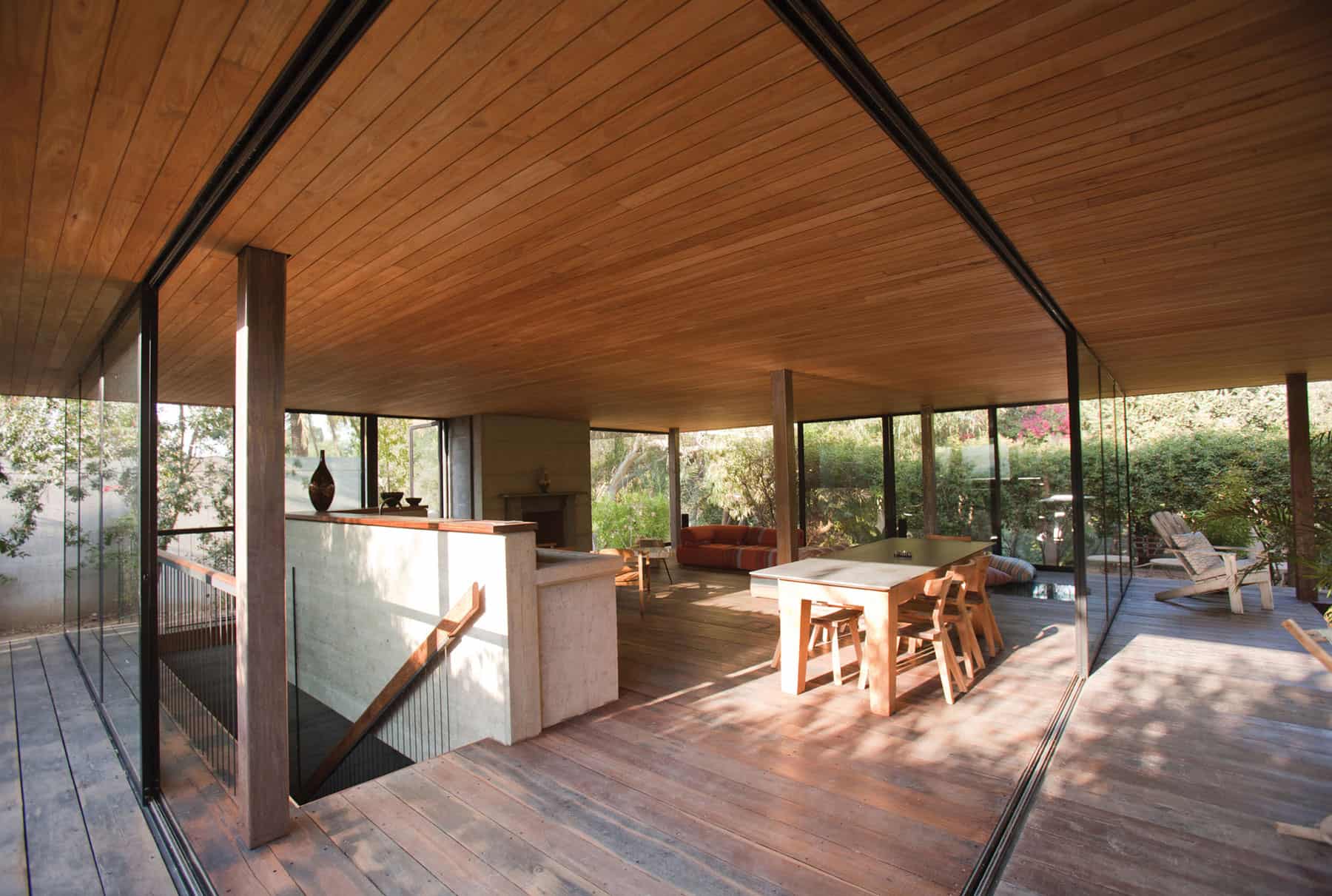 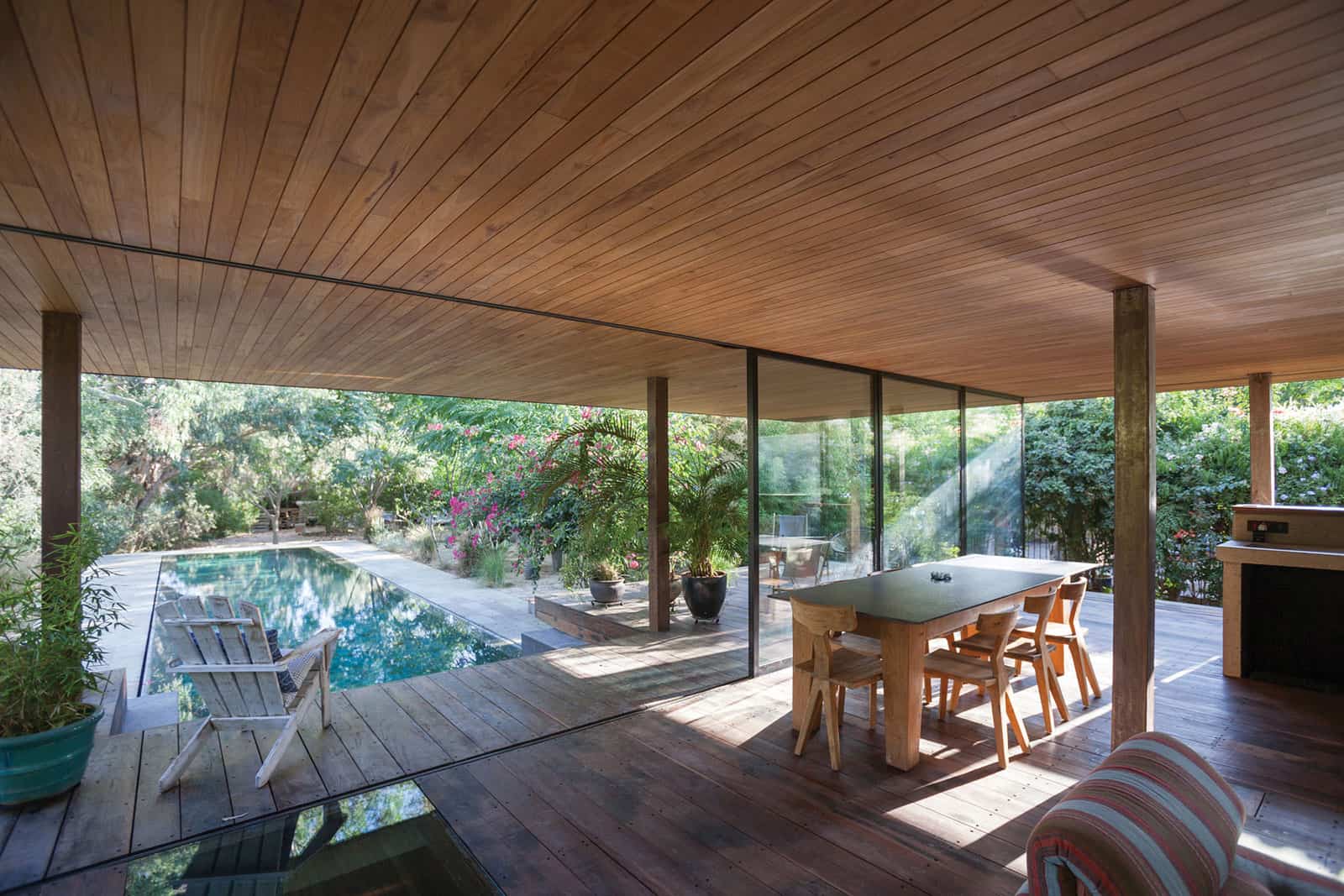 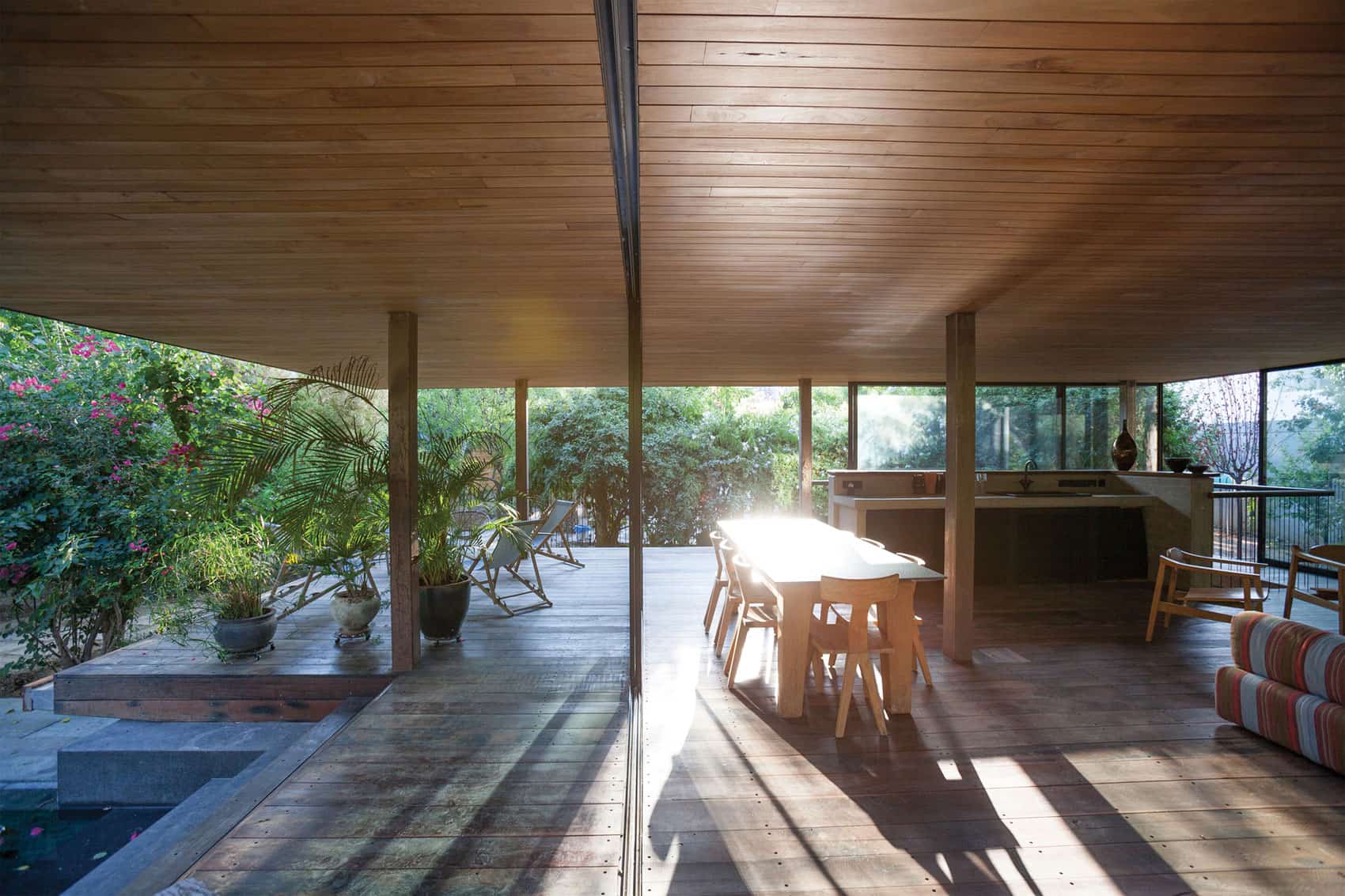 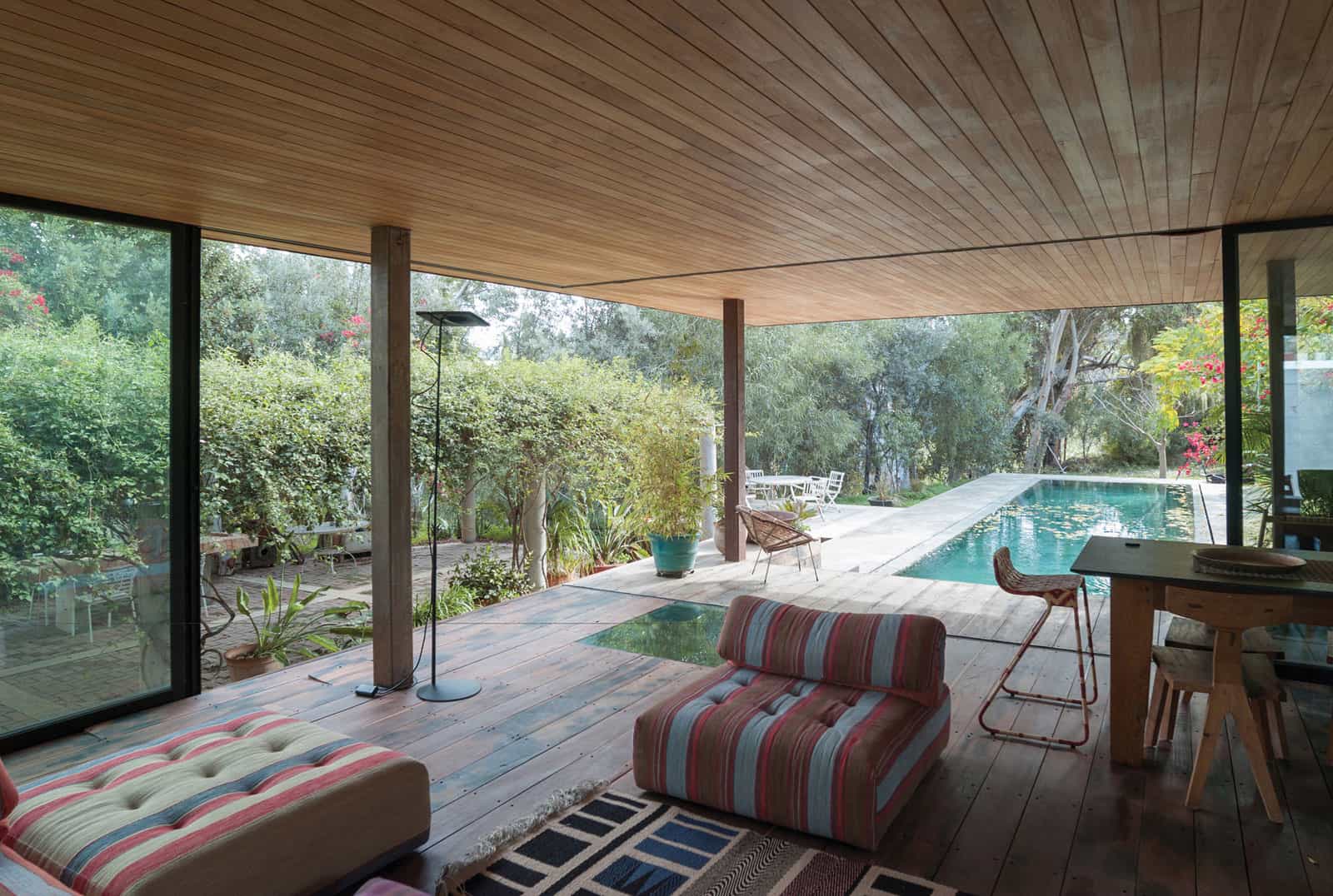 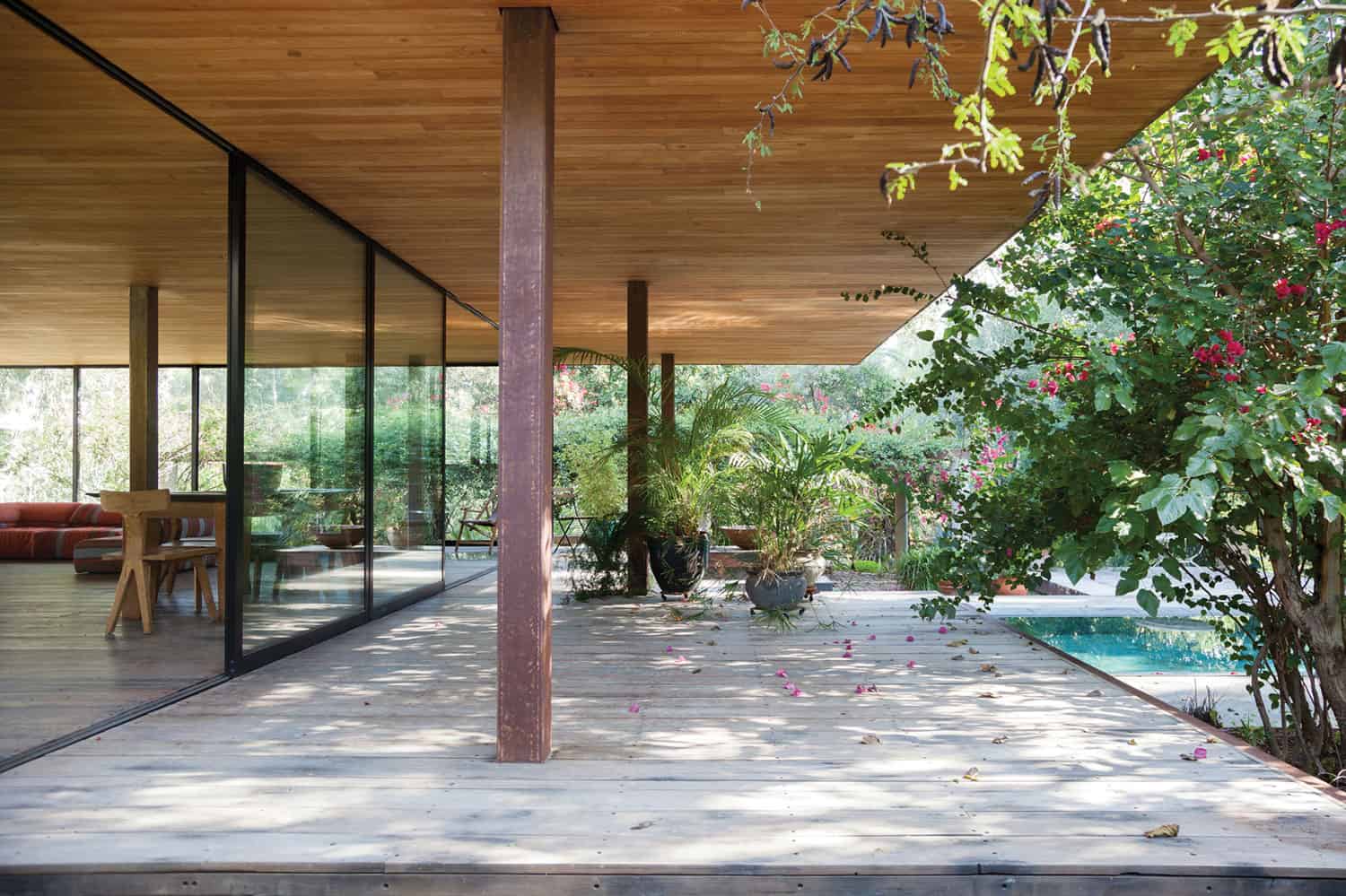 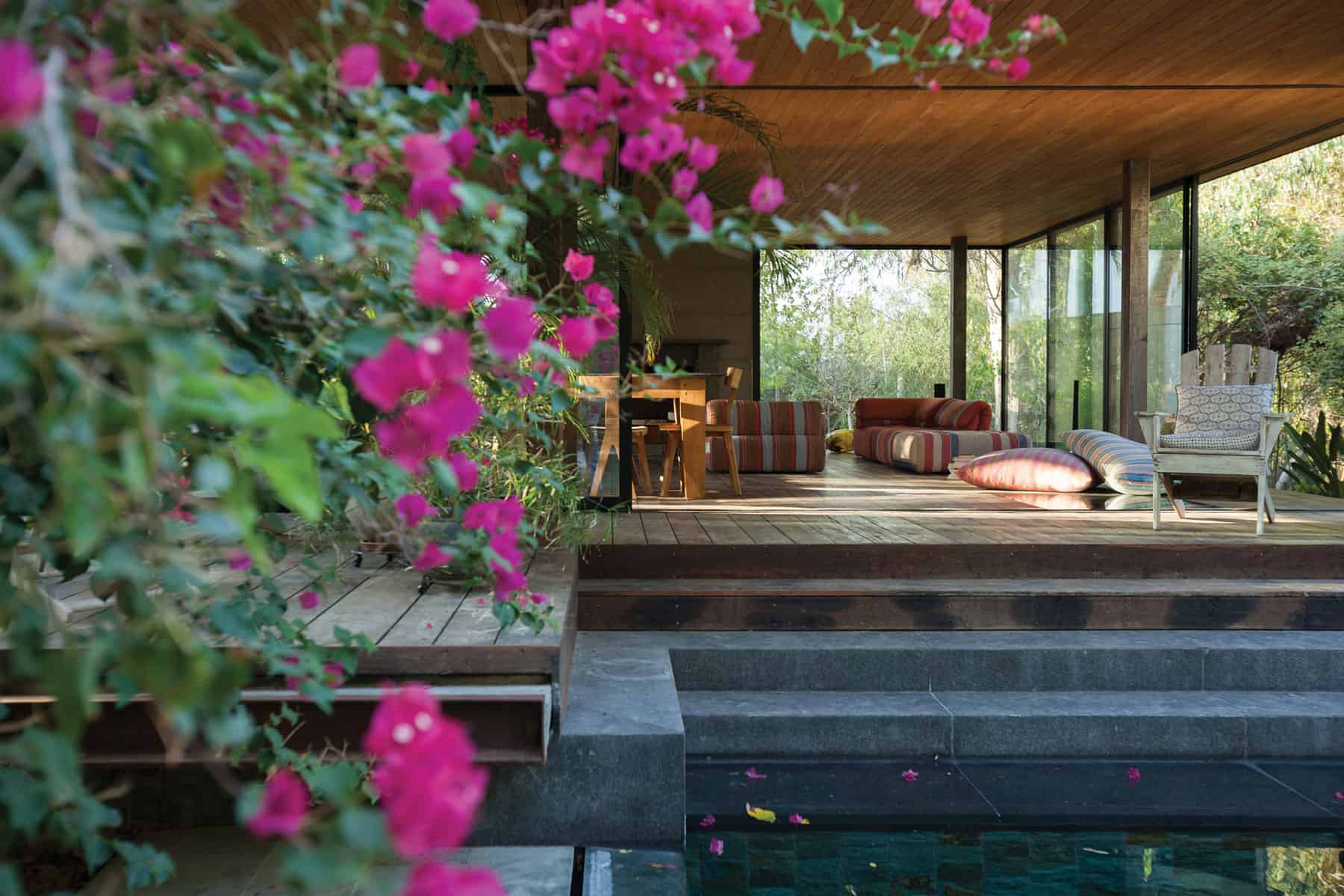 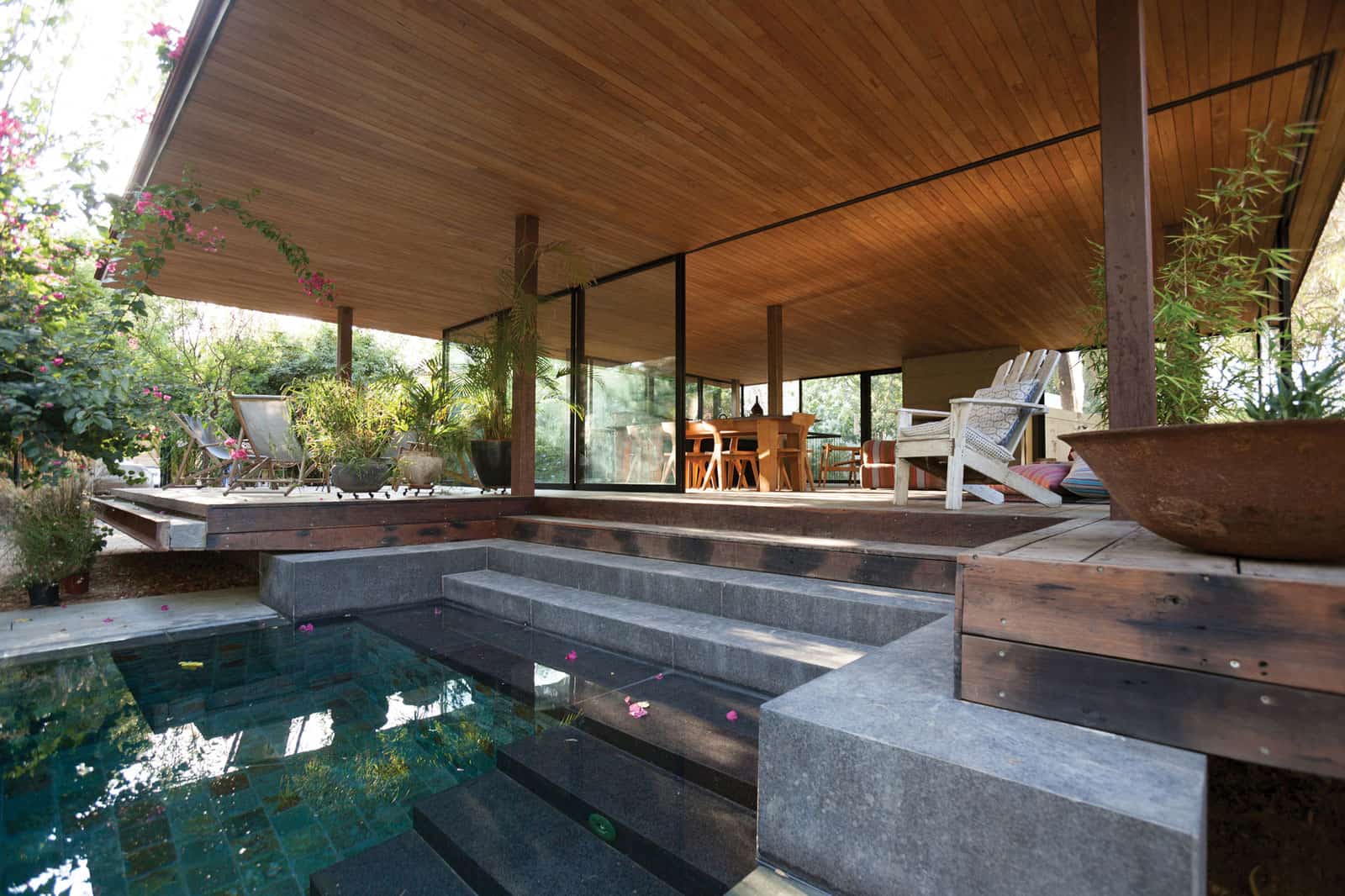 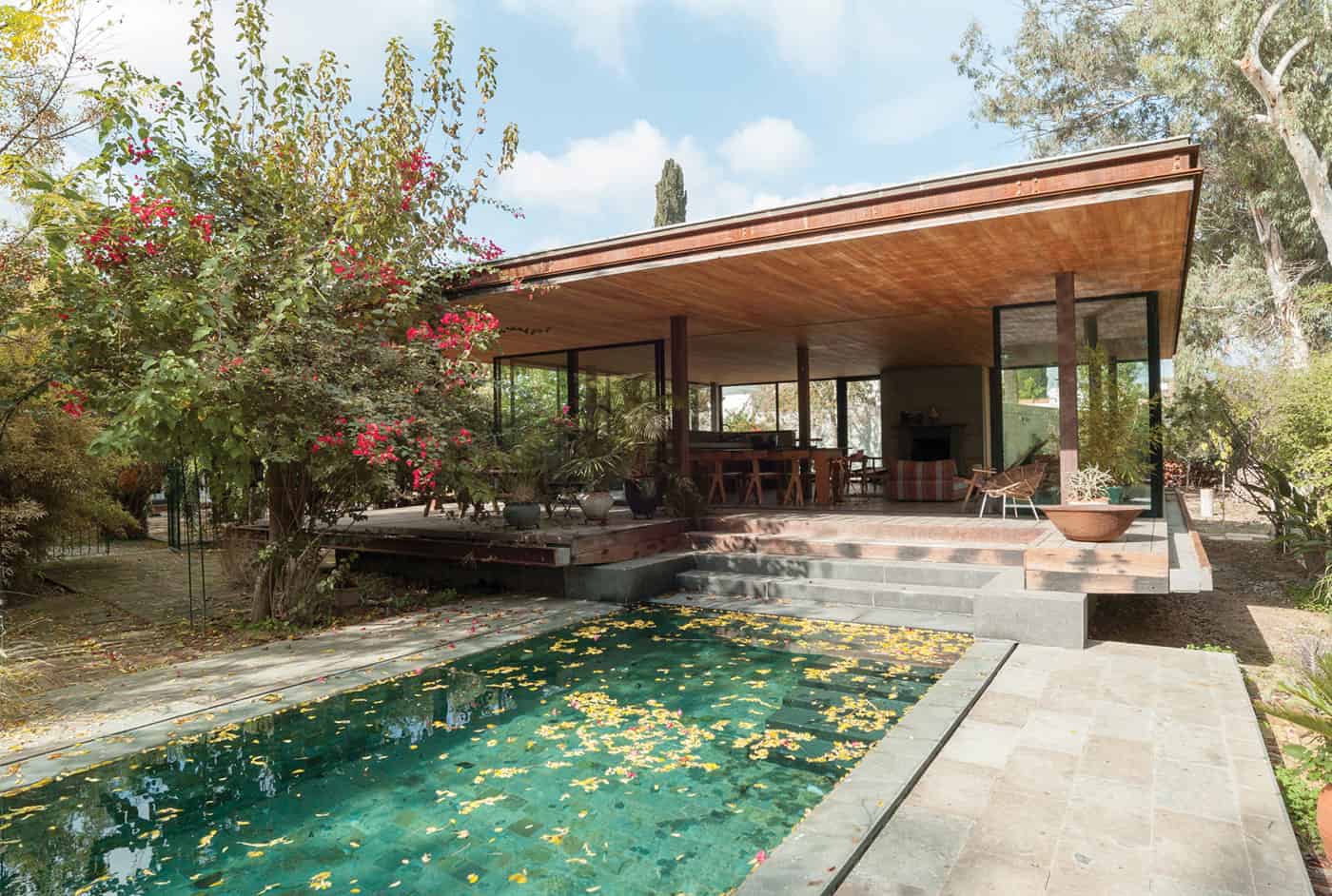 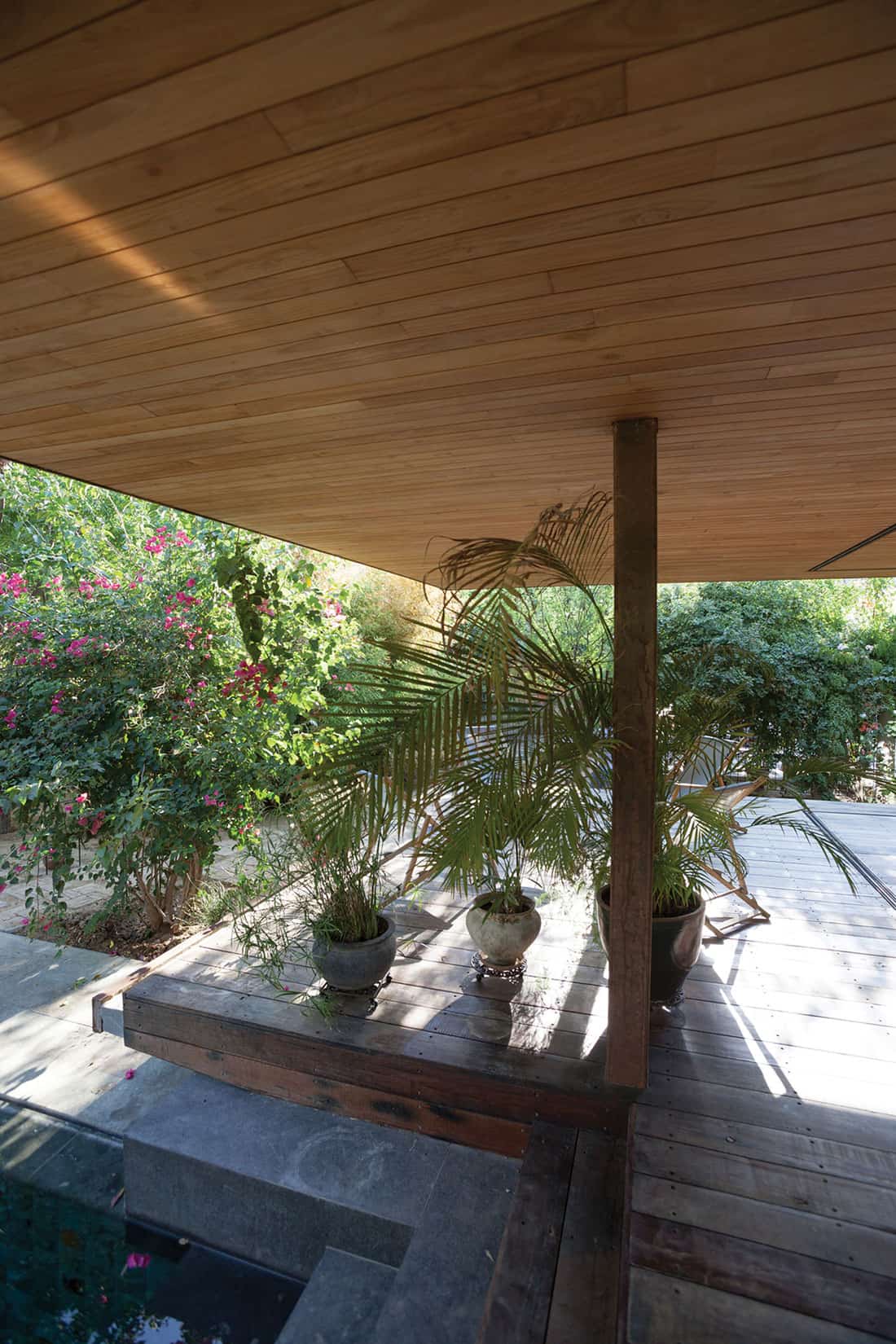 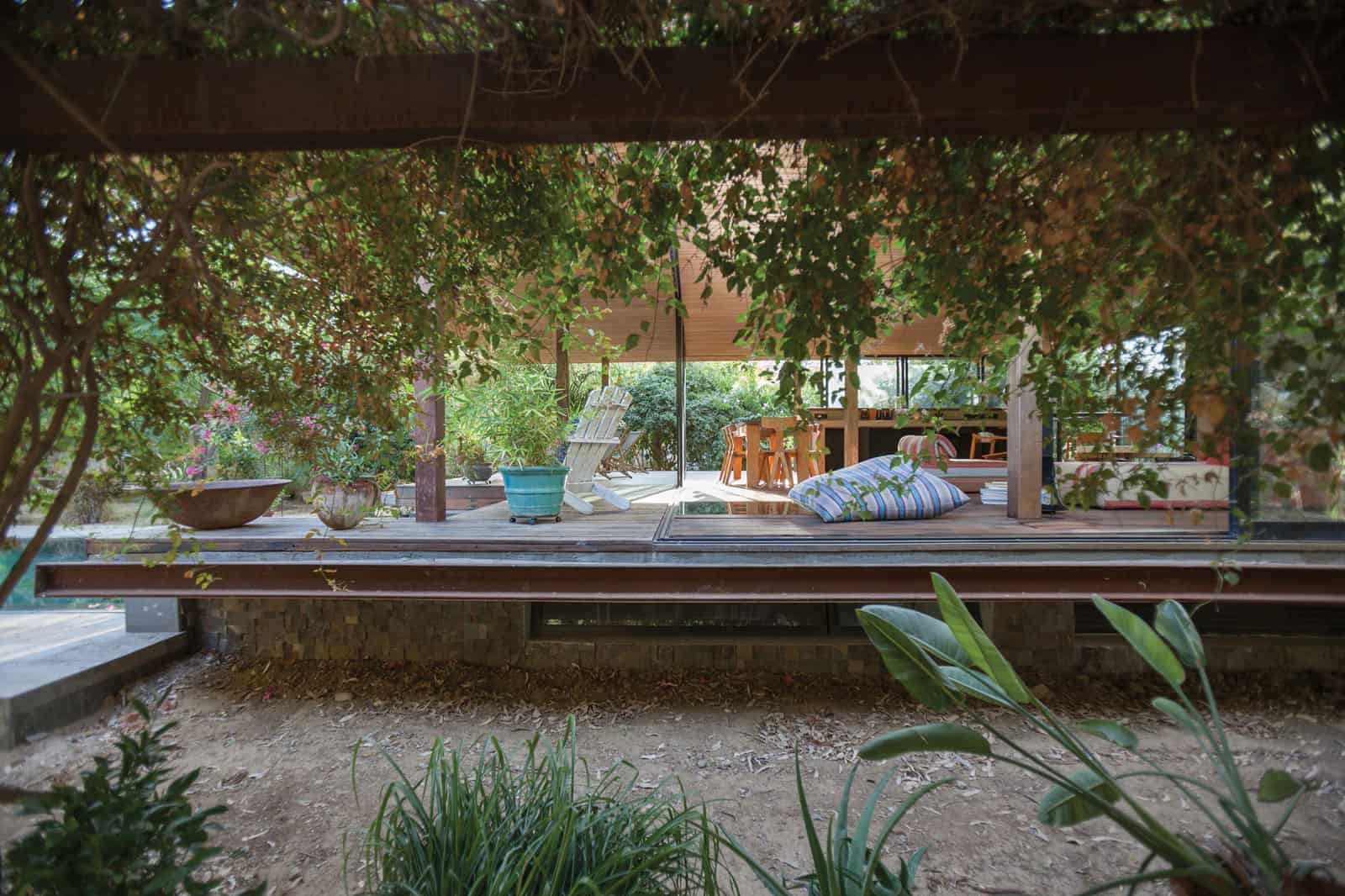 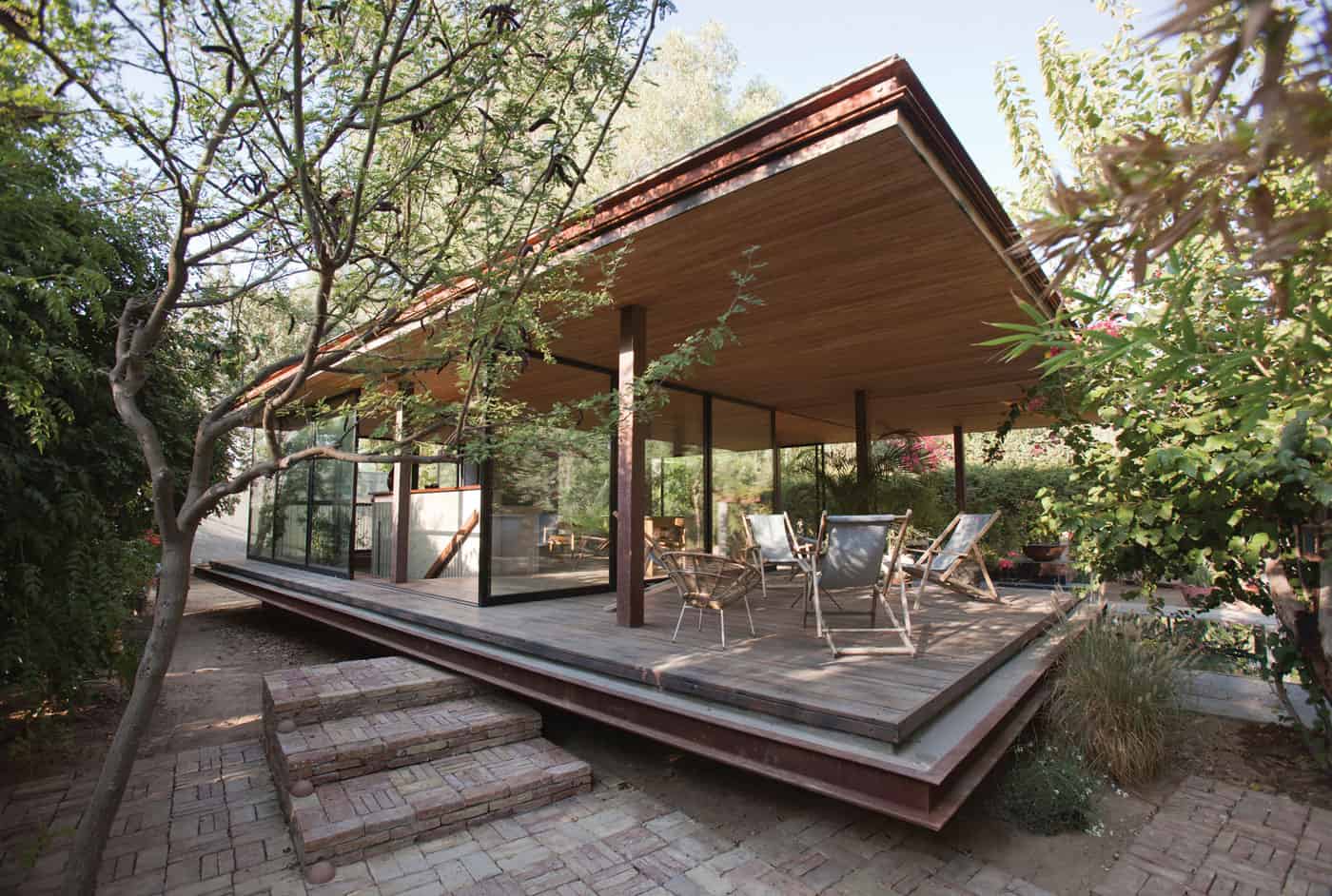 This pavilion was constructed as an extension to the existing home of an architect.

Located in Nicosia, Cyprus, it was designed by Kythreotis Architects in 2013.

“Completed in 2013, the pavilion is situated in a 2,000 square meter (21,528 square foot) plot of land, along the Pedieos river, in the Ayios Andreas district of the city of Nicosia, Cyprus, and is designed to co-exist with a refurbished 1940’s listed house.

The T shaped site enjoys an 80 meter (262 foot) long exposure to the river, on the east, along which, the garden gently slopes down to meet the river bank and merge with its natural habitat, thus blurring the boundary between the man-made and the natural.

The river, at this specific location, has become, through the passage of time, a natural extension of the United Nations buffer zone, colloquially known as the “green line”, a demilitarized zone, frozen in a military status quo since the 1974 Turkish invasion of the island. While this long strip of land swallows up abandoned rural villages, agricultural lands that lie fallow, and stone buildings that crumble in the historic city of Nicosia, it has managed to escape the construction boom on both sides of the Green Line, and as a result, the meadows have recovered from the contamination with pesticides and artificial fertilizers, the hillside forests have been preserved, and the wildlife has been allowed to flourish, becoming a haven for flora and fauna, naturally thriving on the absence of human interference; the green line, due to its isolation, has become literally “green”.

It is at this junction between the man-made and the natural that the pavilion is positioned, right on the riverside, in contrast to the listed house, found at the street end, responding to the suburban character of the area.

Entry to the site is gained through a street gate, on the west side, a few meters from the listed house’s main door, which acts as the main portal to an experience that ranges from suburban to rural and from built to unbuilt. The connection between the old and the new is achieved via an open terracotta paved courtyard / terrace, a landscaped intermediate space, left open to the elements, and formed by the juxtaposition of the two buildings, acting as a transitional space, a planted passage, where nature is experienced as an unbuilt architectural connection.

First conceived in 2010, to function as a nature retreat and guesthouse, the pavilion, with every one of its physical elements distilled to their irreducible essence, represents a minimalist expression of architecture, gently placed within the complementary and concurrently contradicting context of an informally landscaped garden and a spontaneous nature, creating a pure harmonic balance between the man-made geometric form, and the organic landscape surrounding it, a landscape, which becomes an integral aspect of the architect’s aesthetic and architectonic conception.

The pavilion is conceived in such a way so that it unfolds and reinvents itself with the changing of the seasons, thus enabling its inhabitants to experience the rural silence of a unique urban environment through the passage of time. The calm stillness of the man-made object contrasts but at the same time co-exists with the subtle movements, sounds, and rhythms of water, wind, sky and vegetation. Inhabiting the pavilion, involves trust in the environment, It brings one nearer to nature through an almost cinematic experience of the changing seasons, and with no presence of technology like ceiling lights, cooling and heating (other than a fireplace), the experience becomes even more intense and authentic.

The architecture of the pavilion building represents a minimalist expression of structure, space and context.

Spatially, it consists of a 9 by 11 meter (29.5 by 36 feet), semi-basement exposed concrete space, containing a bedroom, bathroom, seating room and a kitchen, acting as a self sustained guest house, and a 12 by 11 meter (39 by 36 feet), open plan, elevated pavilion space, mainly divided by its furnishings, sofa, dining table and chairs, while a low oak and rough concrete cabinet serves as a bar and kitchen.

The Pavilion is composed of two horizontal elements, the floor plane, a concrete slab, floating 80 centimeters (2.62 feet) above the ground, clad with 3 centimeter (1.18 inch) thick reclaimed hardwood planks, and the ceiling plane, a metal decking / light concrete slab, clad with tongue and groove teakwood strips. With its emphatically planar floors and roof suspended on the widely-spaced, steel columns, the space appears to float above the ground, with three wide, red brick steps, transcending almost effortlessly off the ground paving, as if they were floating up to the entrance.

In between the two floating wooden planes, 2.5 meter (8 foot) high floor to ceiling glazed sliding glass walls, empower the architect’s idea of tying the space with its surroundings while redefining the character of the boundary between shelter and that which is outside. The glazing, works together dialectically, shifting the viewer’s awareness between the thrill of exposure to the raw elements of nature when open, and the comforting stability of an architectonic enclosure when closed. A series of lively reflections of the surrounding landscape, create an infinite layering of ever-changing images and experiences.

The pavilion structure is mainly a steel post and beam structure supported on the structural slab which is the semi-basement ceiling slab. It consists of eight square-shaped corroded steel columns contrasting with the lighter trunks of the surrounding eucalyptus trees but also complementing the natural colors through their natural patina, and a hammered concrete structural wall, disguised as a fireplace, that acts as an anti-seismic wall.

On the North, East and West facades the glass walls are flat with no overhang in order to let the morning and afternoon sun in, and maximize the visibility to the sky, while on the south side of the pavilion, the roof structure / wooden ceiling extends beyond the sliding glass walls and acts as a cover to an elevated verandah space, an extension of the inside, on the right, and to the slow steps leading directly into the green andesite stone tiled overflow pool on the left.”