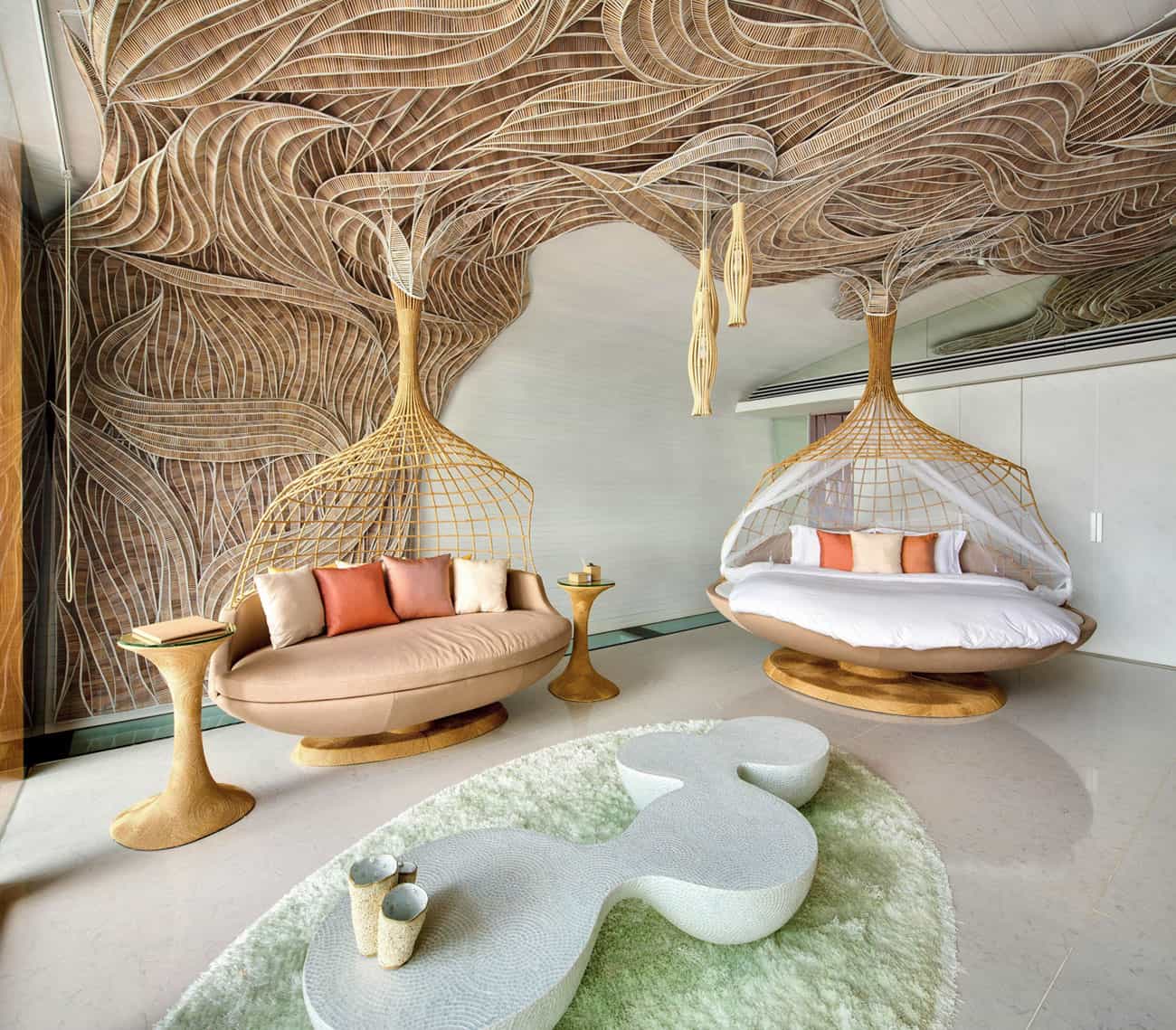 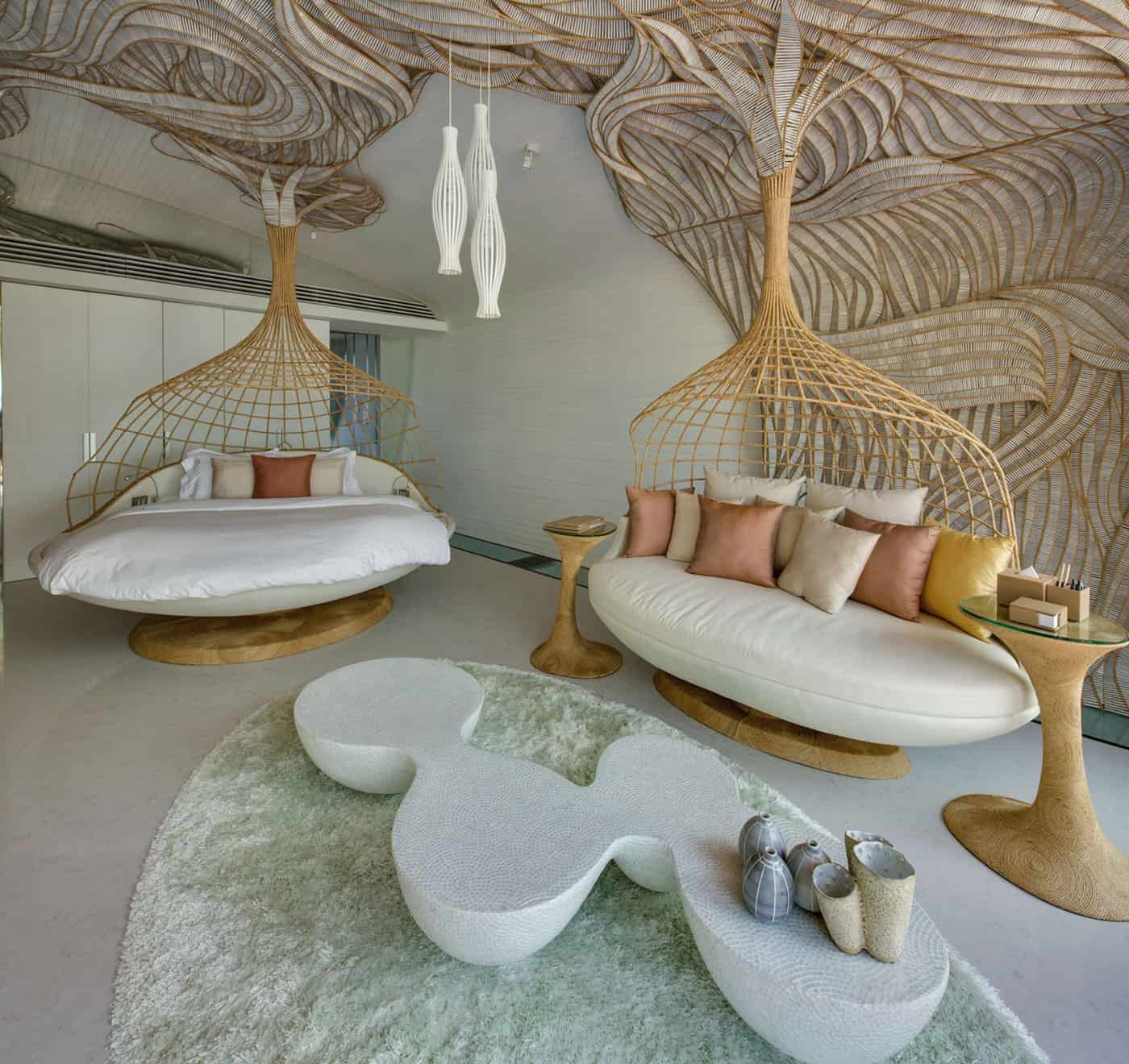 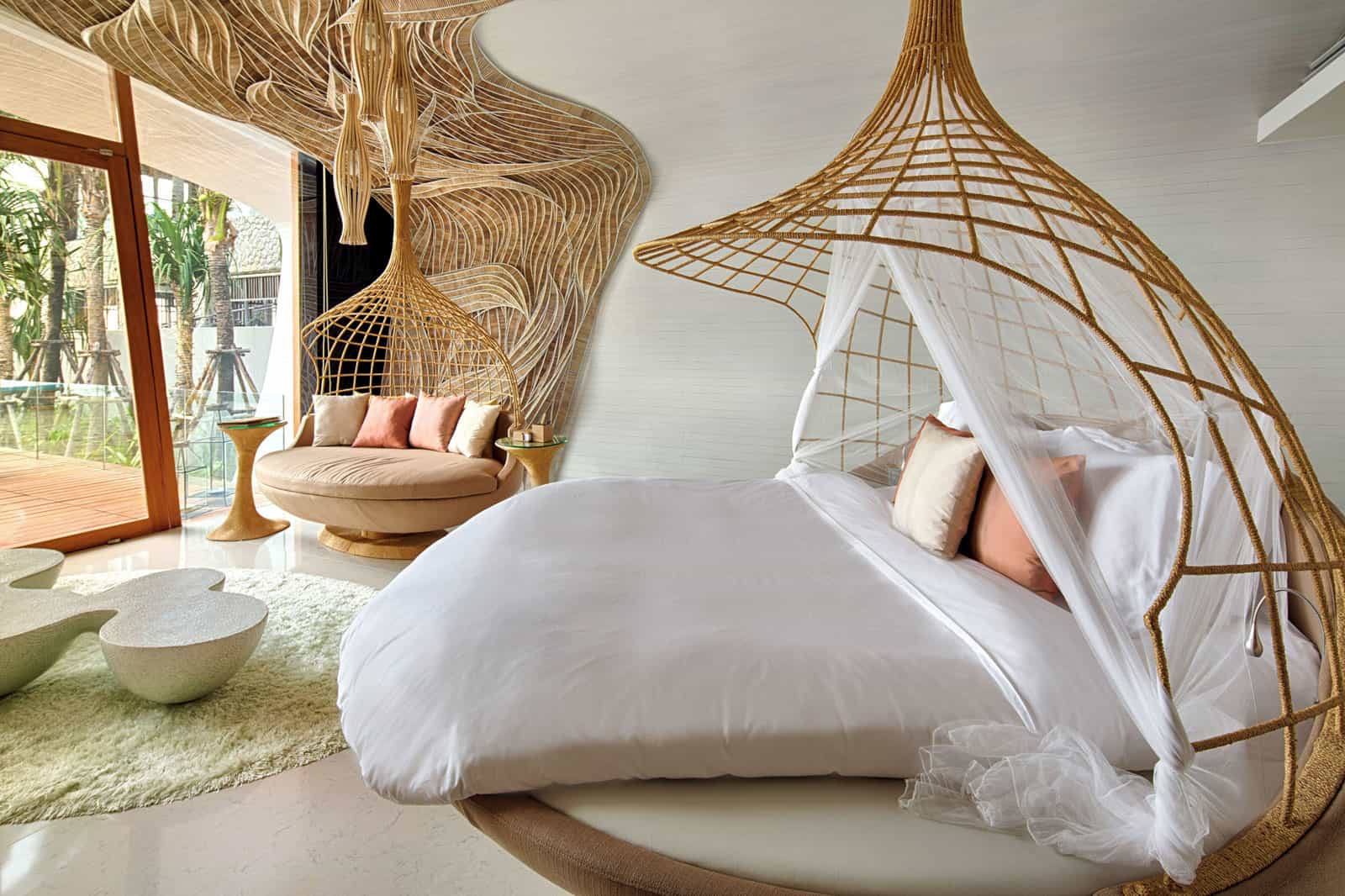 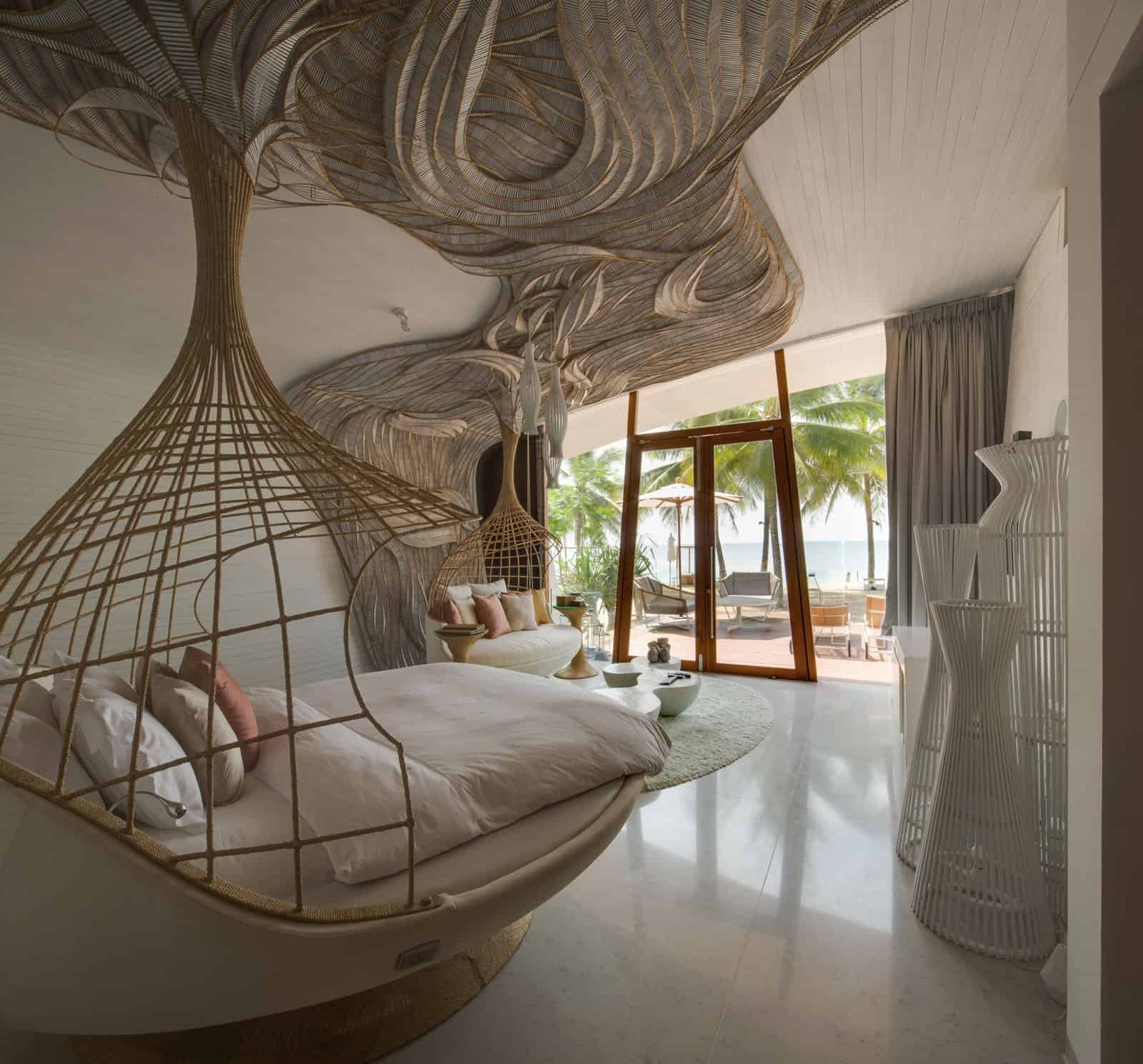 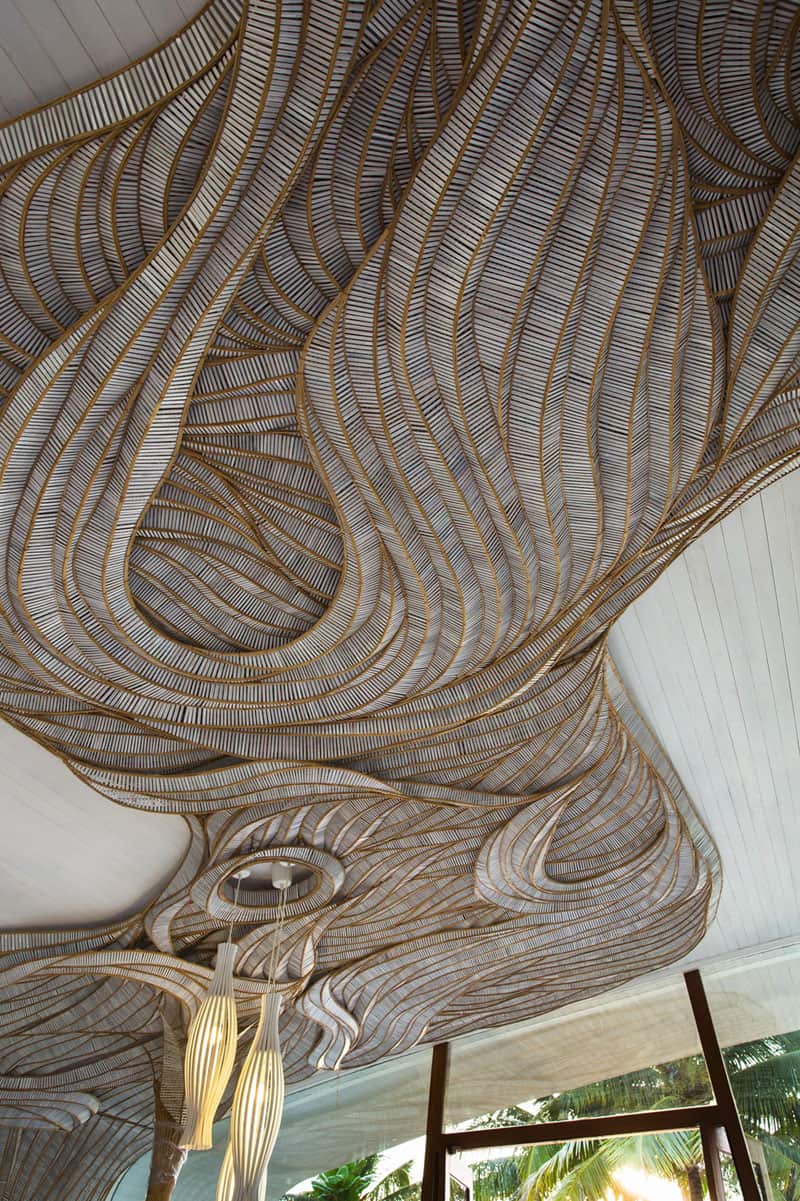 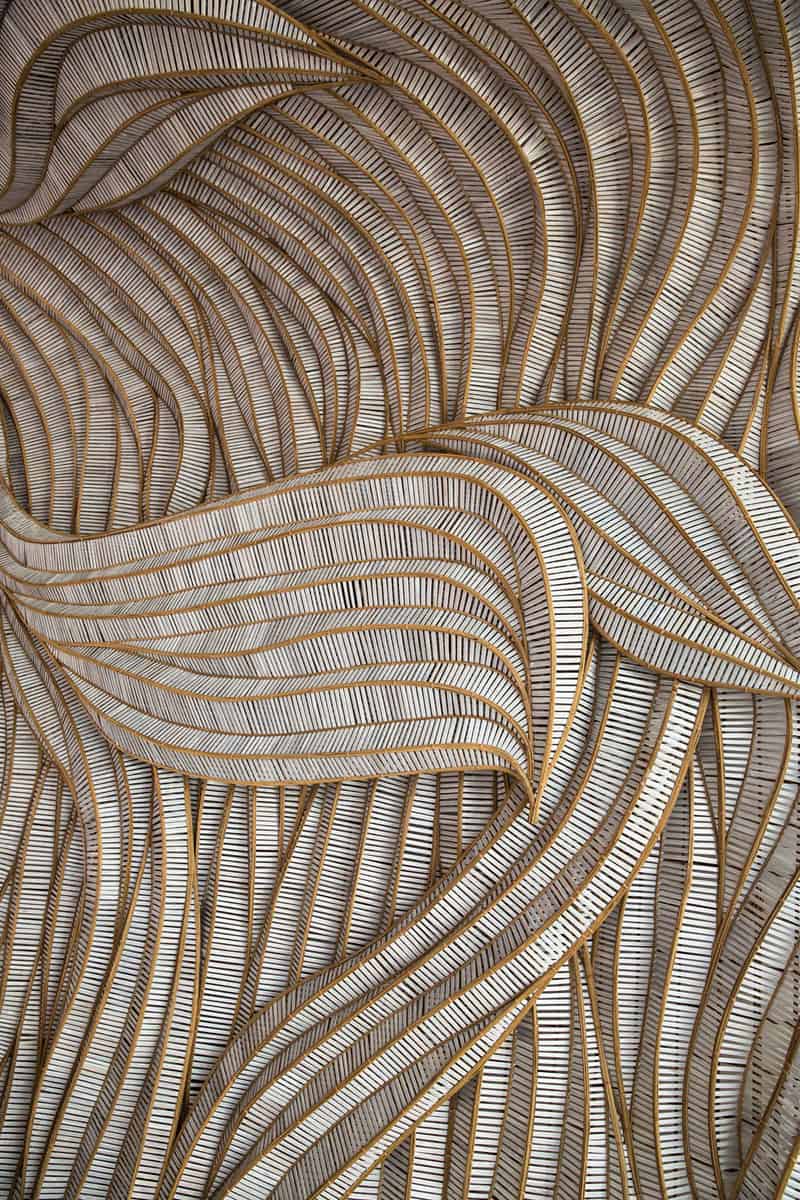 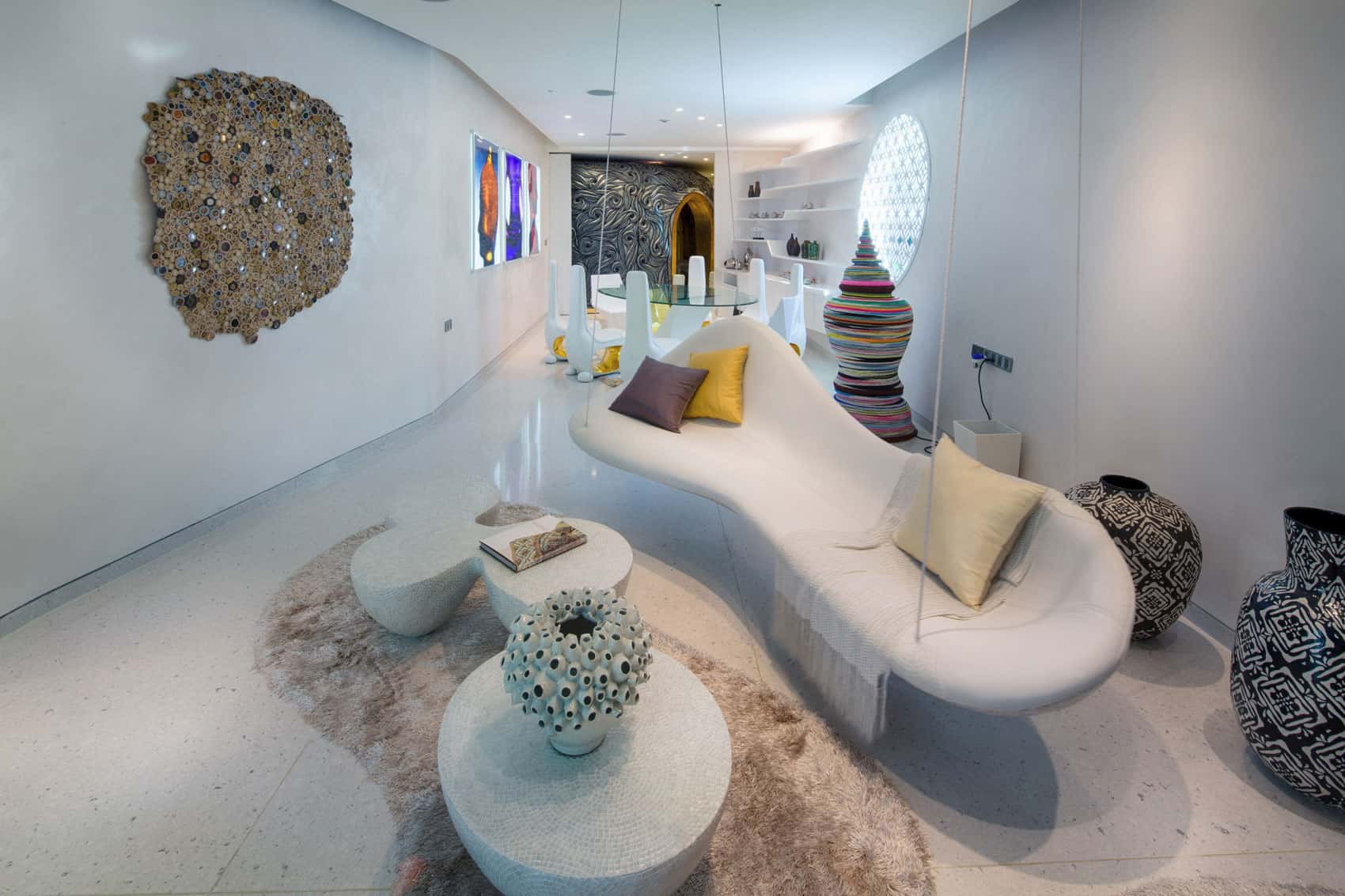 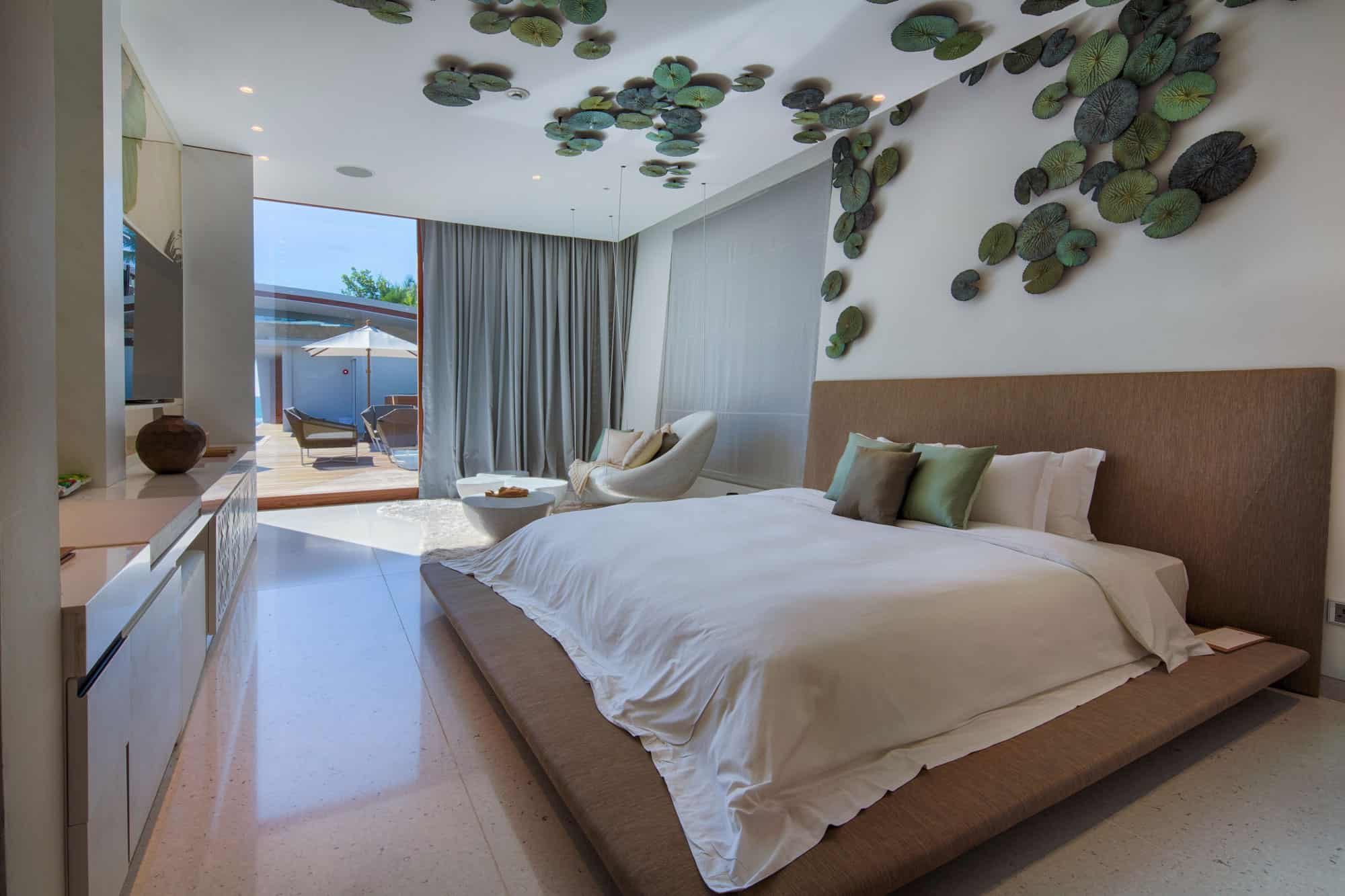 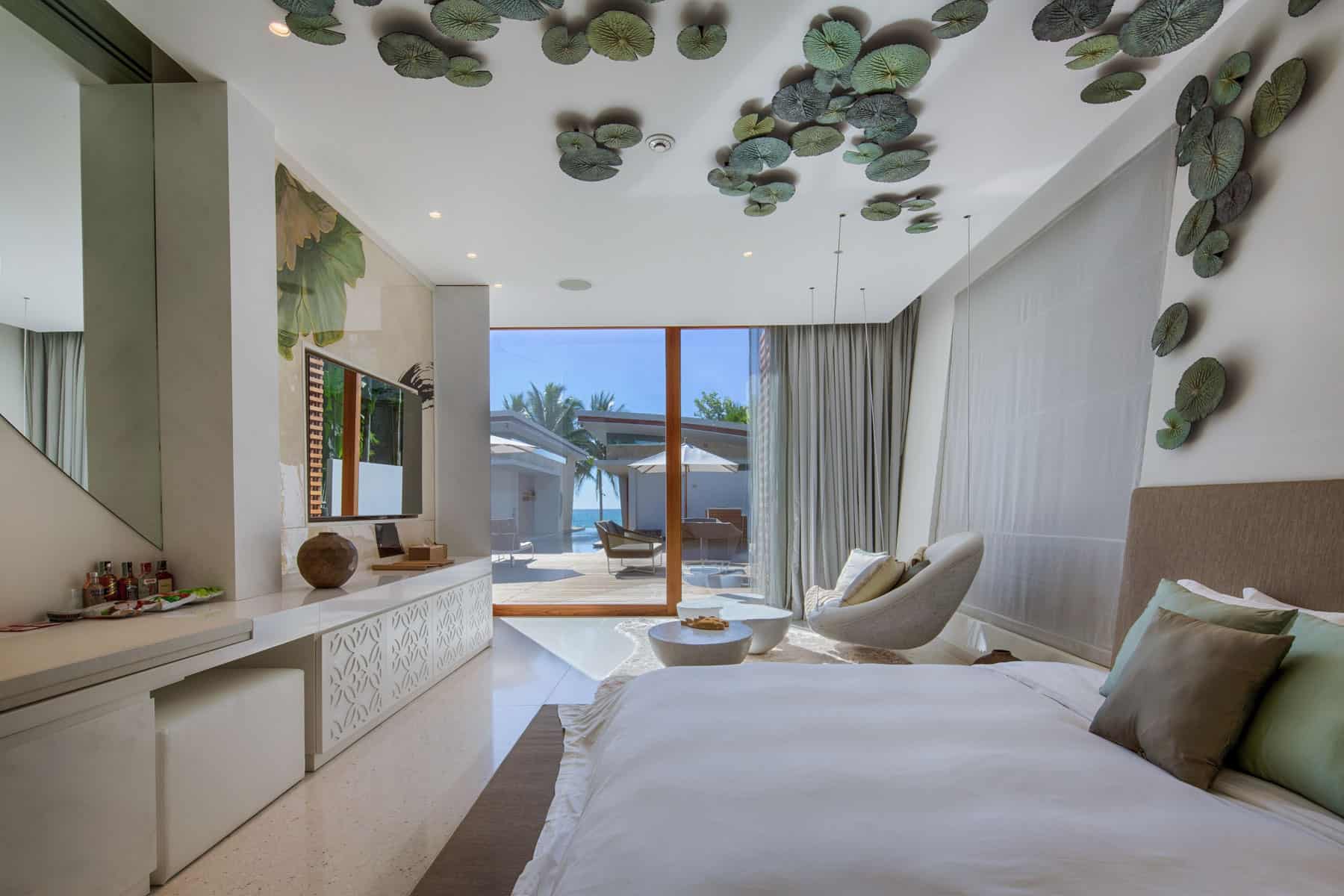 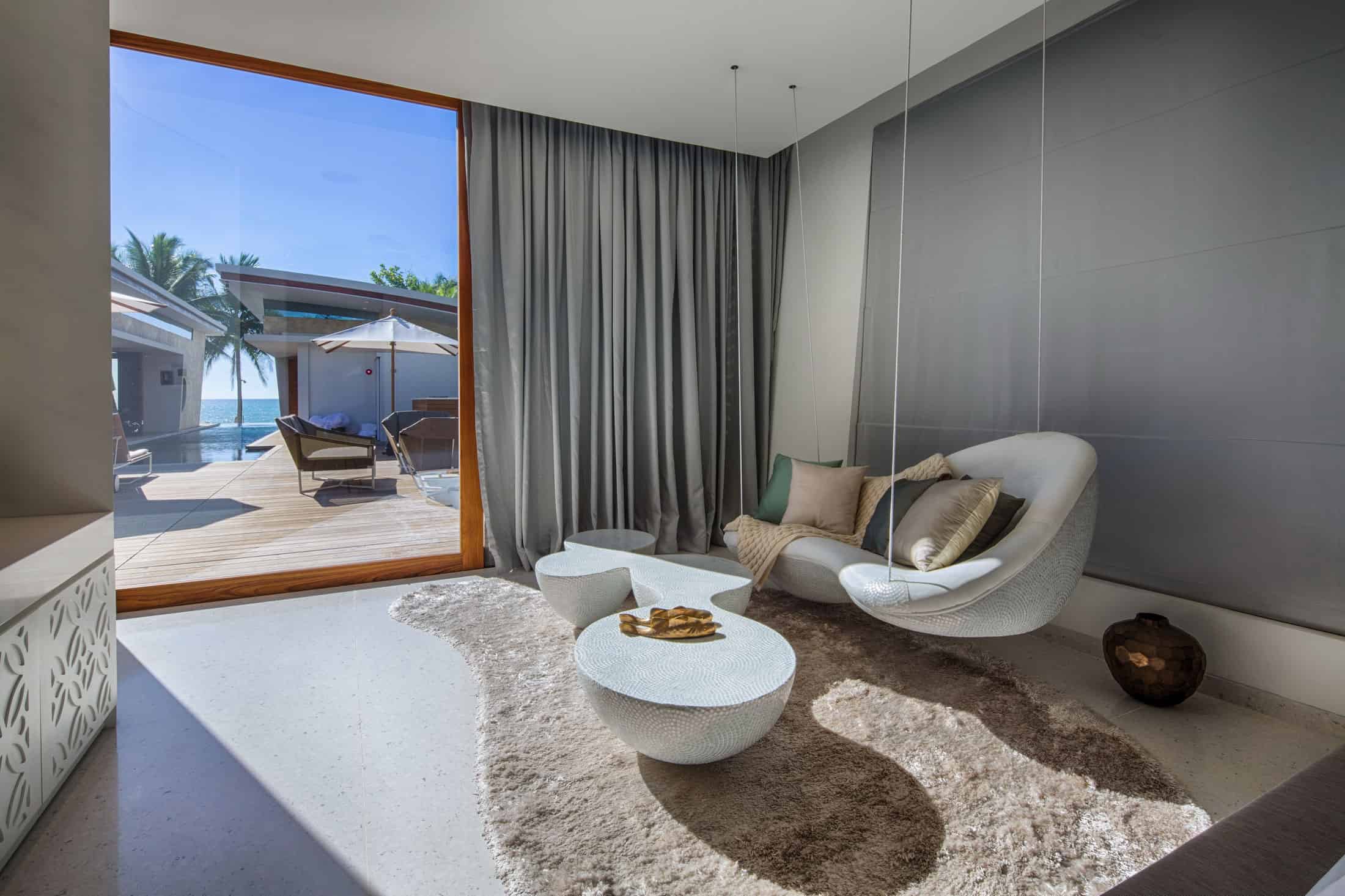 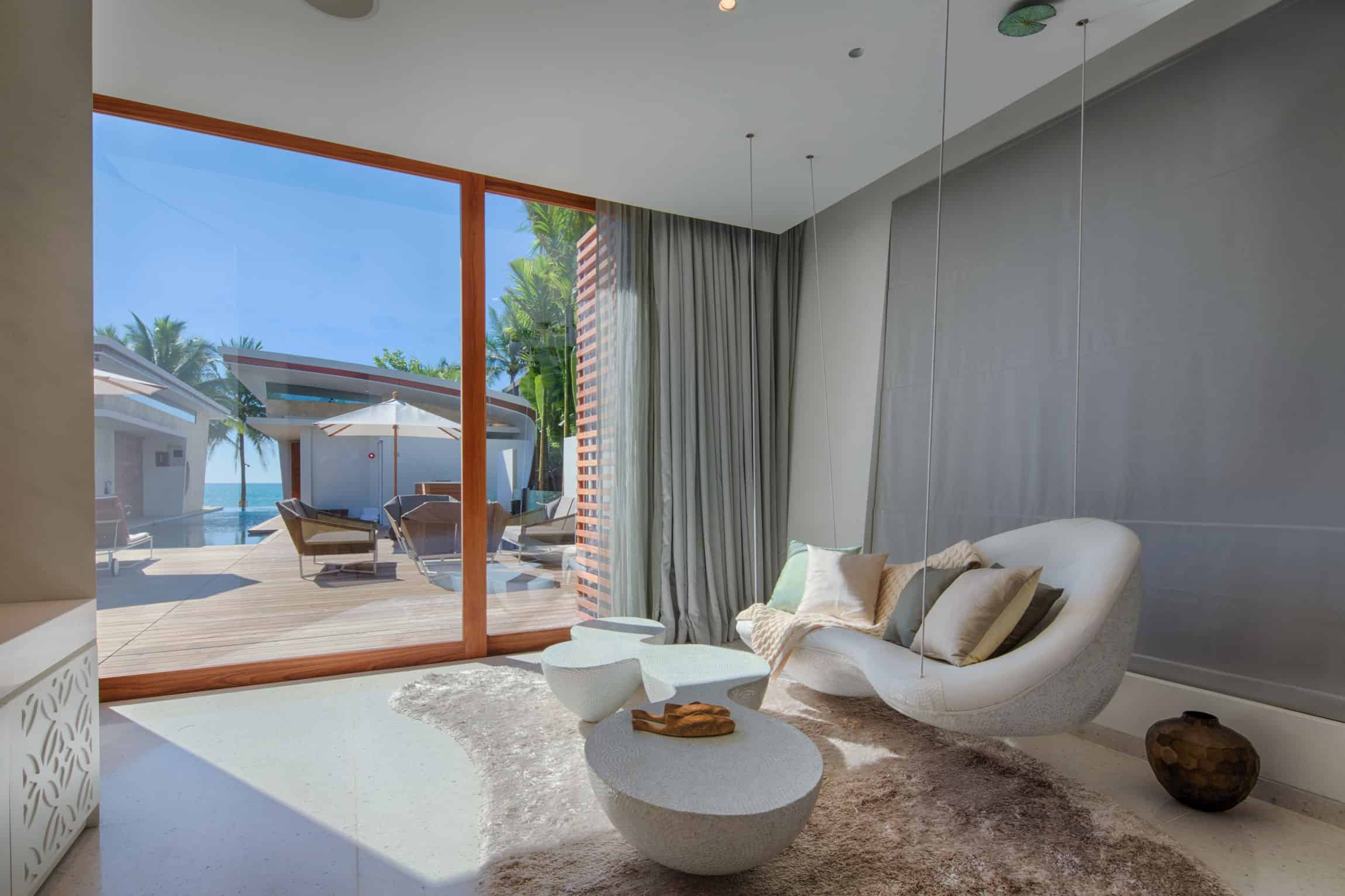 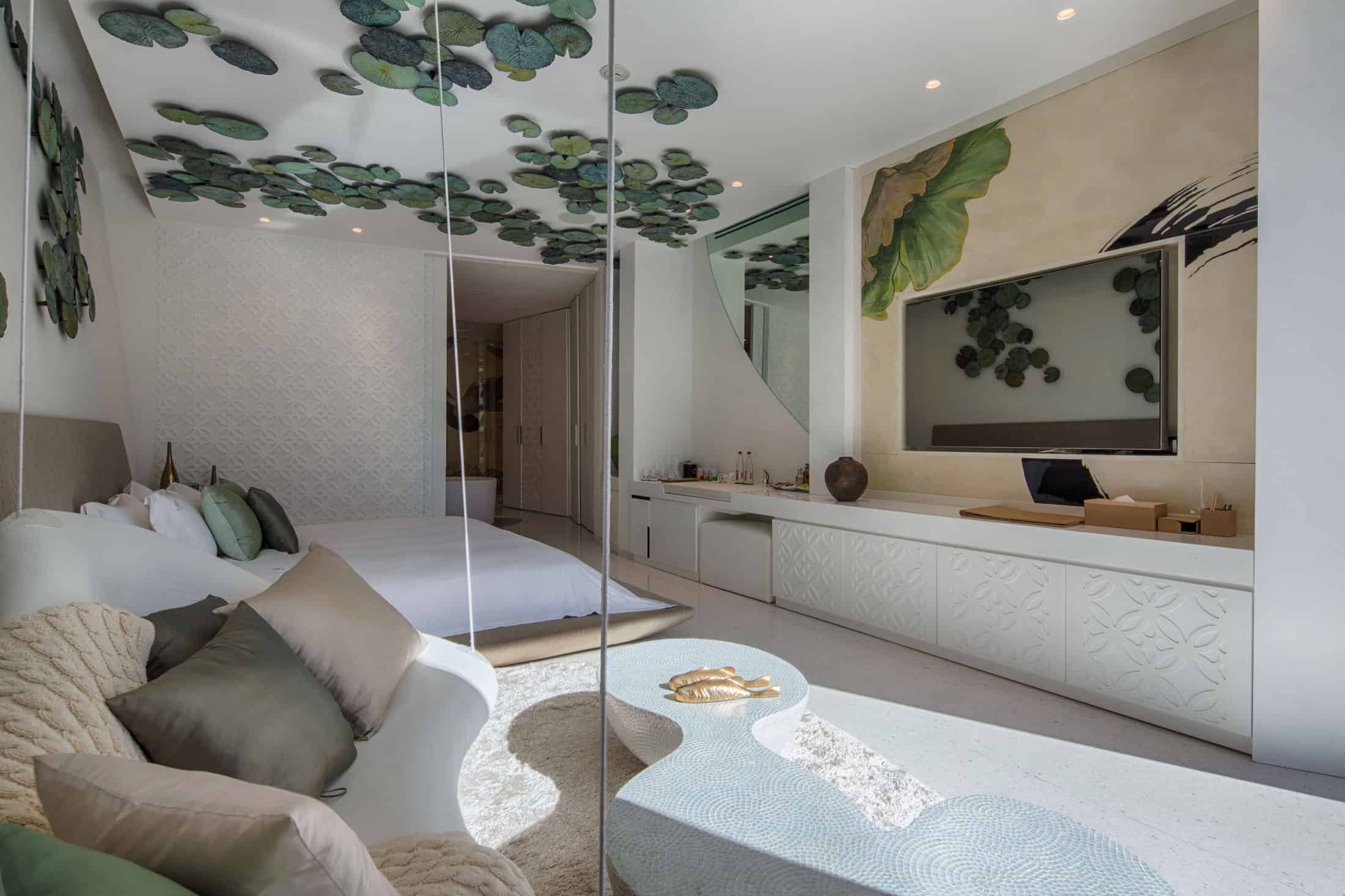 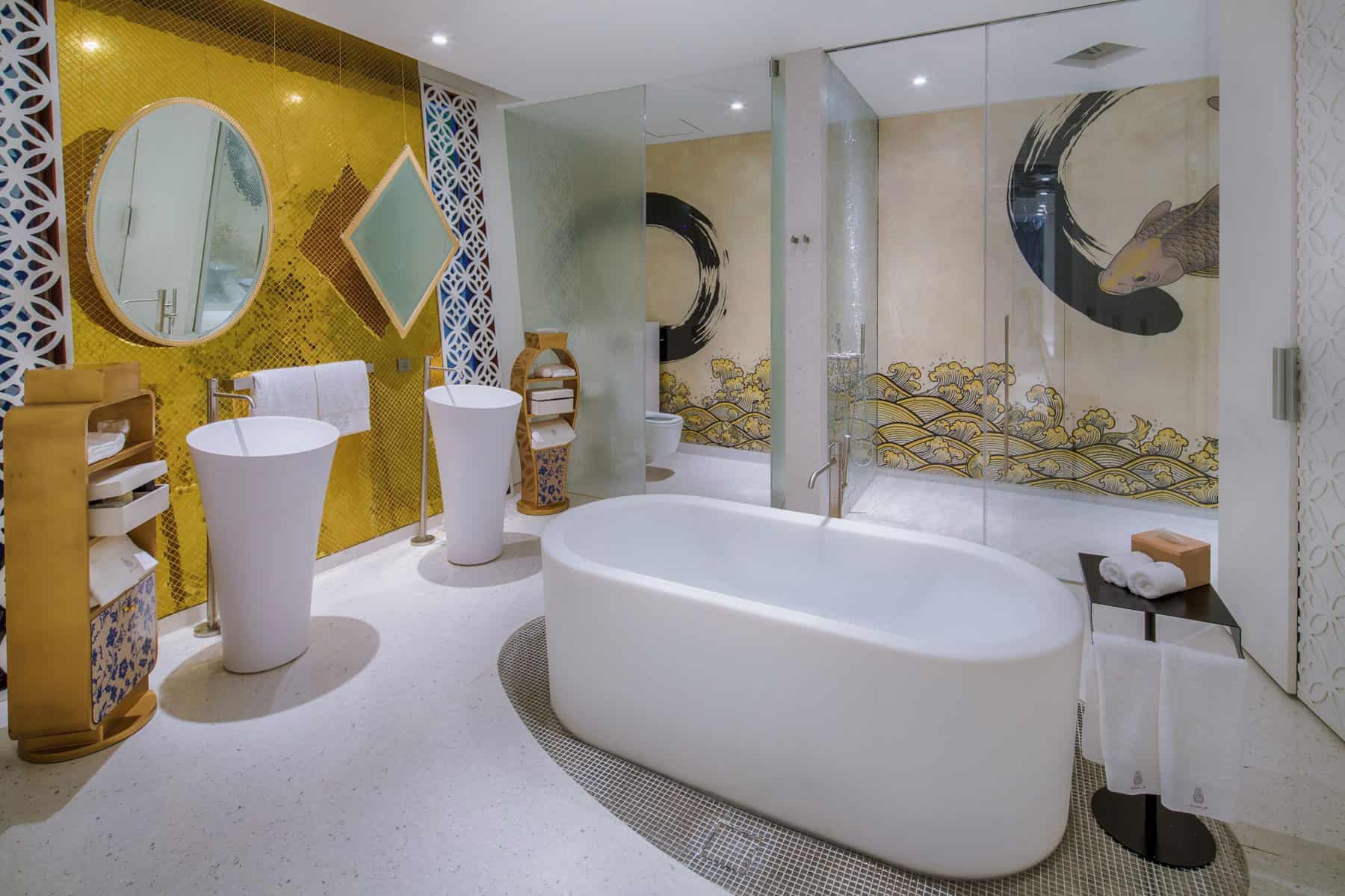 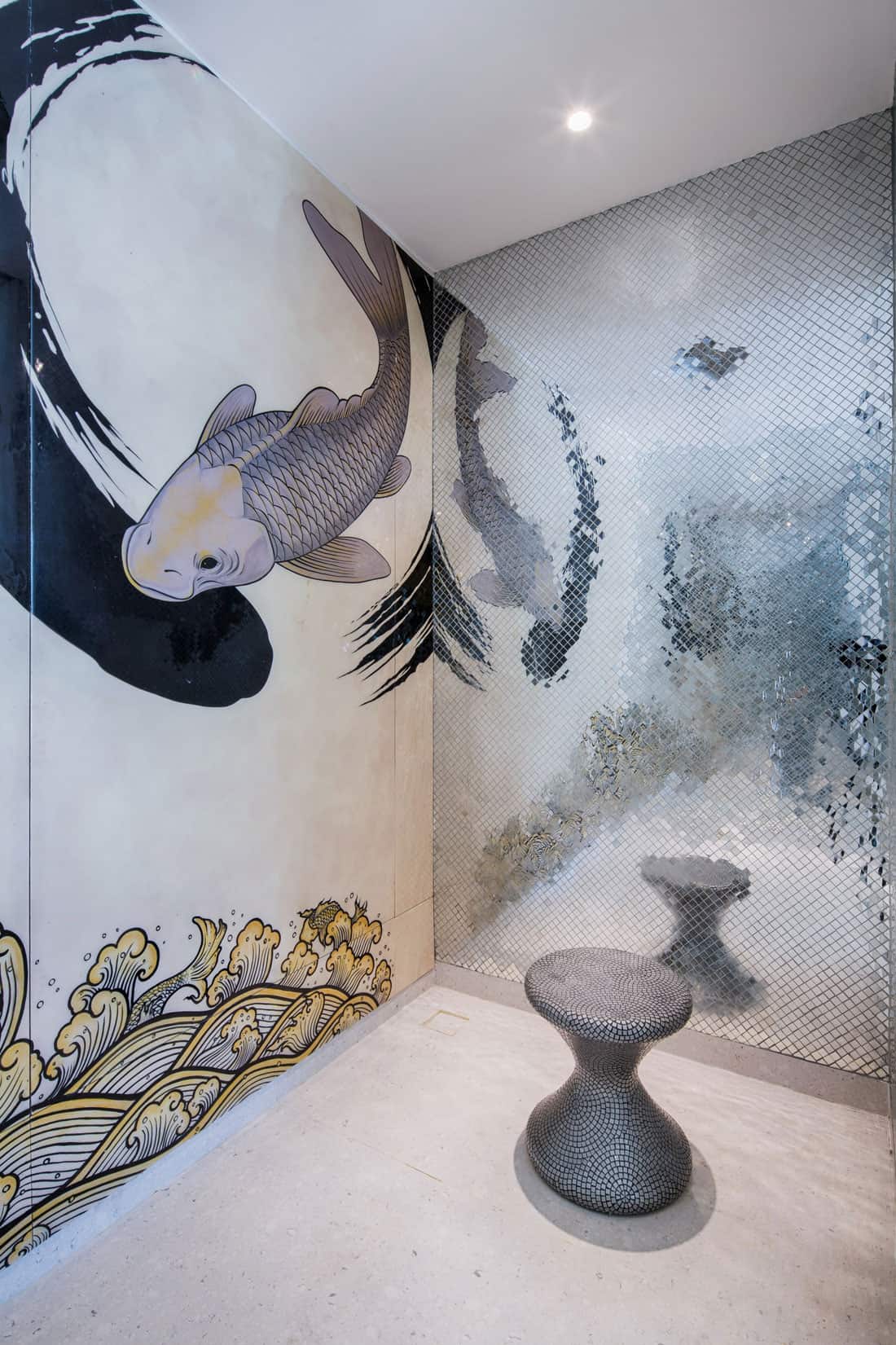 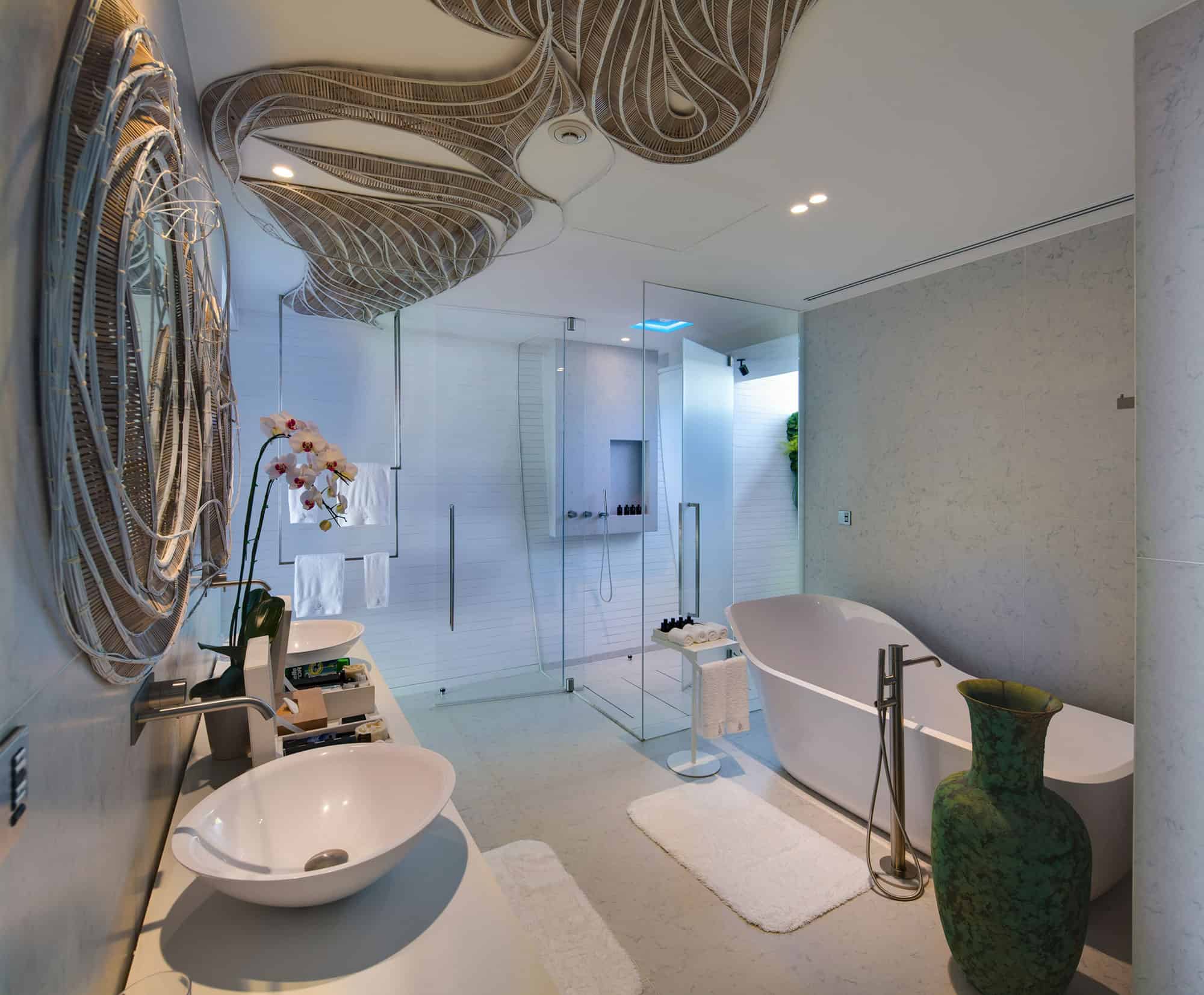 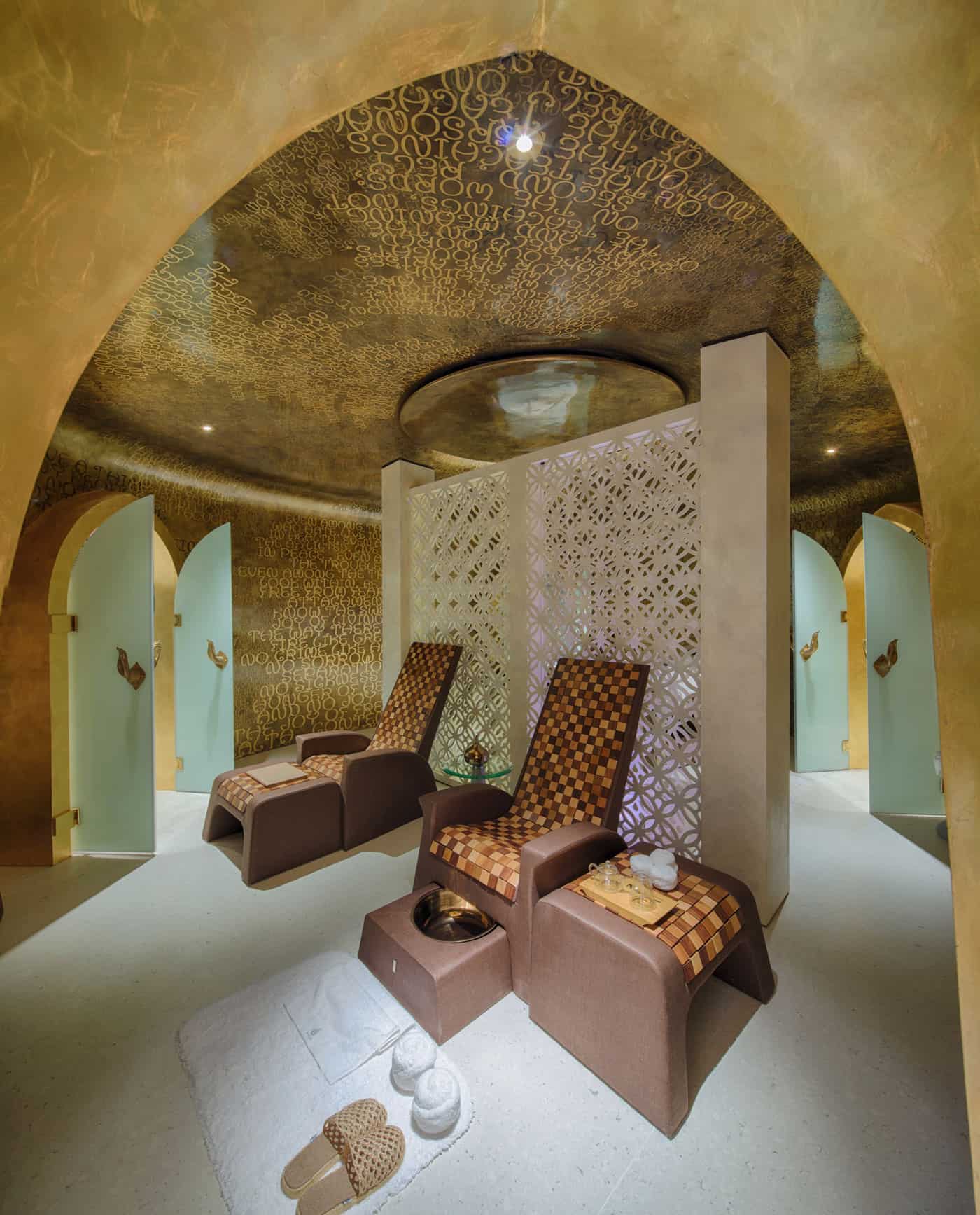 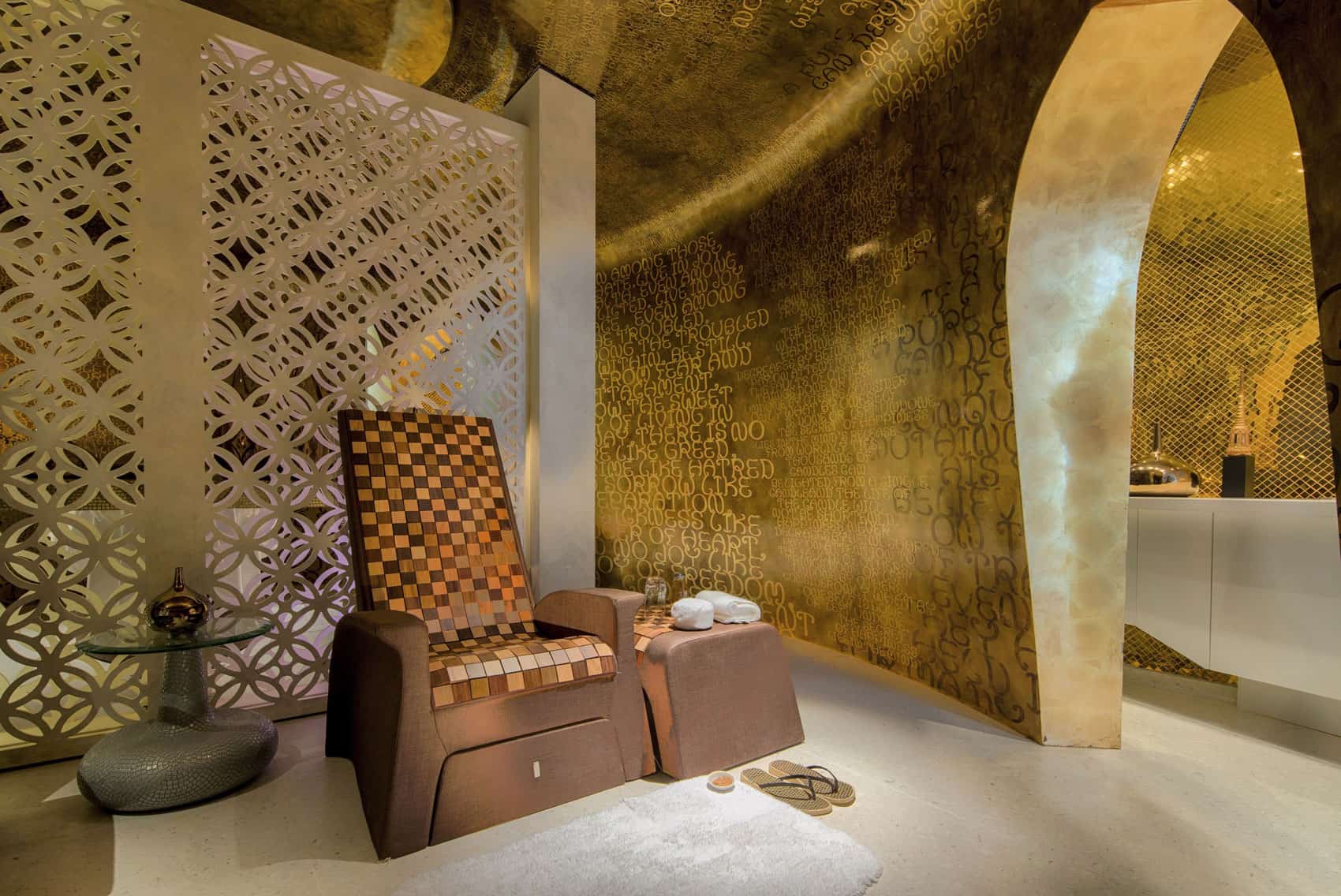 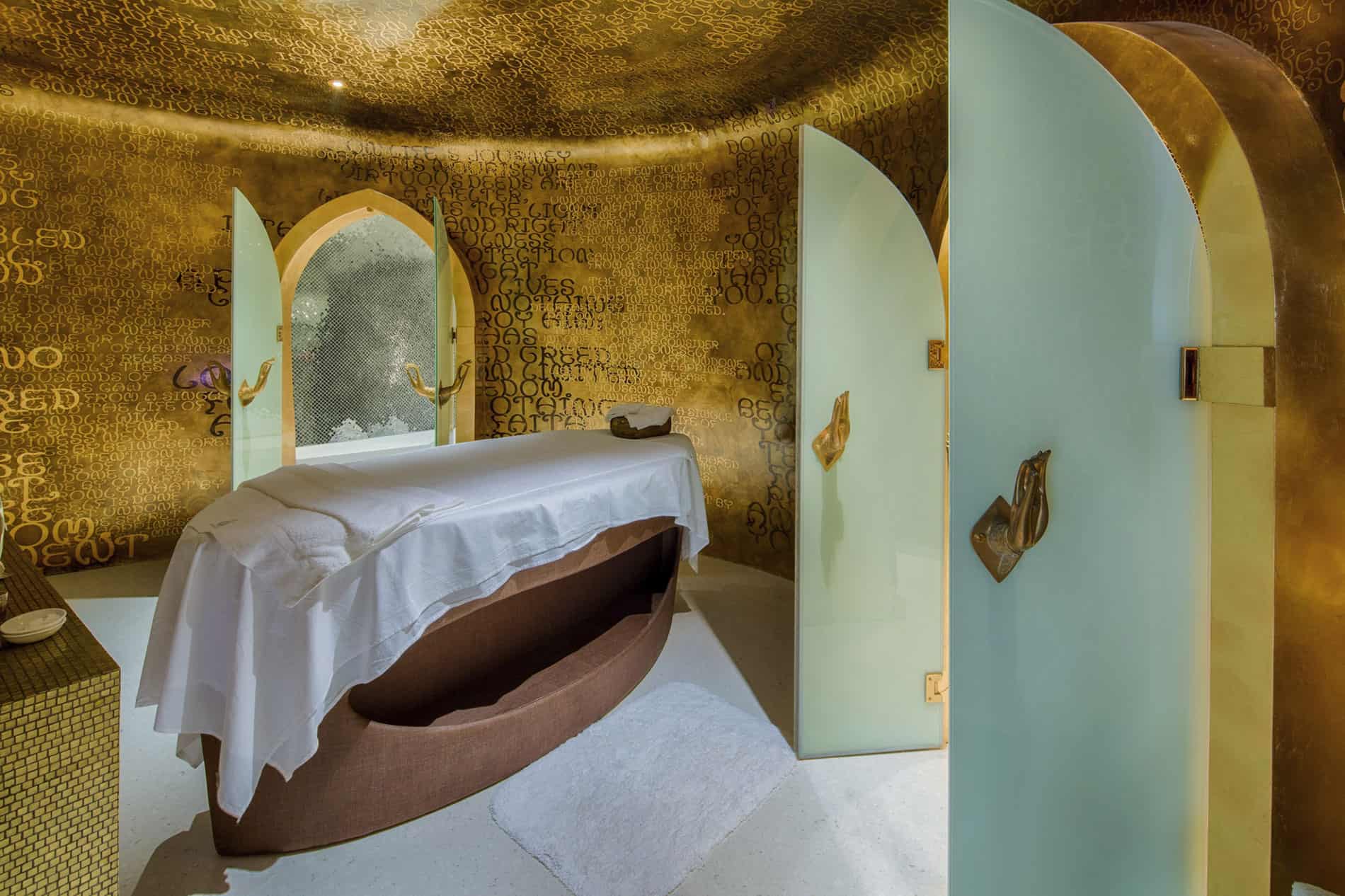 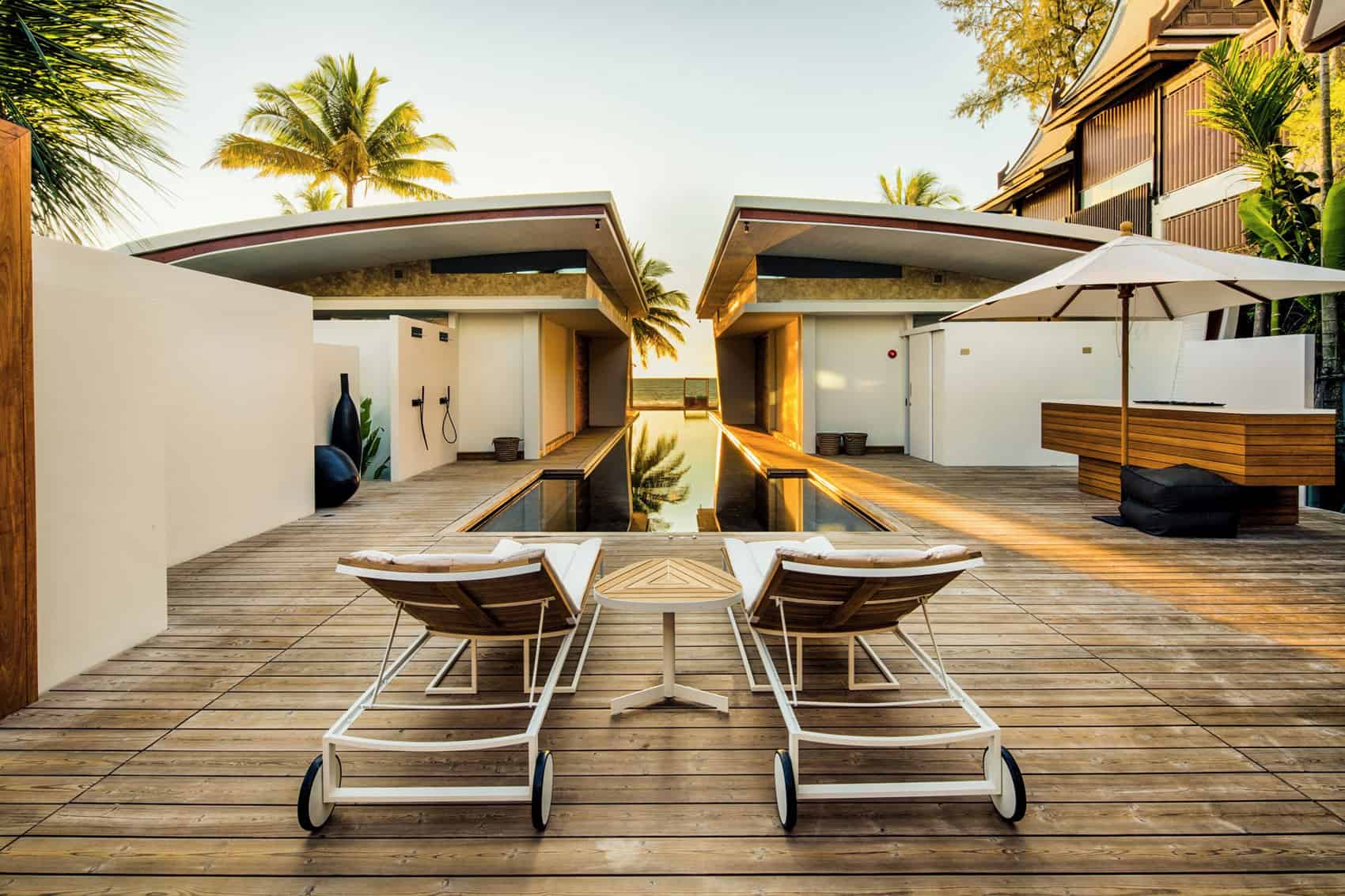 “Iniala Beach House is comprised of three villas (each with three suites), and one spectacular penthouse suite. The residence is a masterpiece of design fusing traditional Thai architecture with organic, contemporary forms. World-renowned designers of the villas include The Campana Brothers of Brazil, A-cero from Spain, Joseph Walsh of Ireland, Mark Brazier-Jones of New Zealand, Graham Lamb from Britain and Thailand’s Eggarat Wongcharit. Every bedroom and living space is completely different. The Beach House has 10 bedrooms spread over 3 individual villas and a spectacular Penthouse. Every bedroom and living space is startlingly different; a unique expression from the masters of contemporary design from all around the world.

Villa Siam is designed by Eggarat Wongcharit and is a maximalist fantasy inspired by Thai culture and Buddhism; includes beds and sofas suspended from the ceiling by wicker bamboo. The villa’s own spa is located within an ancient golden Thai bell, with Buddhist teachings translated into English inscribed in the walls. Eggarat Wongcharit’s extraordinary creations use a modern take on traditional Thai craftsmen’s techniques. Intricate wickerwork and glass mosaics grace his eclectic and daring rooms of the villa, and his work is unique and original.

Common areas: inspired by nearby Phang Nga Bay, all of the furniture is Thai as well as the artwork, and a collage of small pictures of Buddha are “protected” by being wrapped in a crochet hanging on the wall. The room pays a tribute to the sacred Buddha with three large illuminated images on the wall behind hanging white sofas covered with mother of pearl. A wrapped pagoda with traditional Thai weaving expanding over it onto the ceiling ties the room’s contemporary lines and Thai roots seamlessly together, and the weaving incorporates an elaborate dream catcher facing down upon guests as they walk in. A dining table seats up to six, with the backdrop of eclectic and playful waving cats.

Beyond the living room is perhaps the most breathtaking part of Villa Siam – The Spa. A golden dome inscribed with Buddhist teachings translated into English, and hand cut mirrors in the shower and toilet areas are placed in a traditional Thai technique commonly used in the building of temples. This Spa also has a traditional Thai steam room and is inspired by a temple in the mountains of northern Thailand.

Lotus Suite: Inspired by the symbolism of the Lotus flower
This mystical suite is aptly named for the lotus pads splashed on the ceiling over the bed, very Thai in style and with much symbolism. In Buddhist teachings, whatever is on top of water is said to be elevated. The lily pads over the bed are inverted so that while the guest sleeps, their spirit is elevated in their dreams. Another mother of pearl suspended sofa accompanies the bed. In the bathroom, a Thai graphic designer was commissioned to create a lotus fish on a large piece of resin.

Siamese Suites: The complementary Siamese Suites (two bedrooms) are absolute beachfront and serve as each other’s ying to yang. The symmetry of the rooms are opposite using white and natural wood, and the suites have cocoon beds with the traditional Thai weaving technique used with bamboo, giving the rooms a fresh scent. Each room also has outdoor jungle showers, the walls covered with vibrant green plant simulations.

The Lotus Suite is inspired by the organic nature of the four Buddhist elements of Earth: Earth, Wind, Fire and Water; 65 sqm2 (700 sqft)

The two Siamese Twins Suites were inspired by nearby Phang Nga Bay and utilize a cocoon theme throughout the complementary rooms; 65 sqm2 (700 sqft) each

The Spa is inspired by a temple in the mountains of northern Thailand, with a golden dome in stature and inscribed with Buddhist verses translated into English.”